AIM: To study the clinical outcomes of medical therapy in patients with right colonic diverticulitis.

METHODS: The records of 189 patients with right colonic diverticulitis which was finally diagnosed by computed tomography, ultrasonography, or operative findings were retrospectively reviewed.

Using computerized patient databases, we searched for all patients who were hospitalized with the diagnosis of colonic diverticulitis from January 1998 to August 2007 at Kyung Hee University Hospital, Seoul, Korea. Excluded were patients who were clinically suspected of having colonic diverticulitis without operative findings or radiologic evidence from CT or US, patients whose colonic diverticulosis alone was present without any evidence of inflammation, and those whose follow-up records were unobtainable. A total of 189 patients were retrospectively reviewed and data were collected with regard to age and sex, clinical presentation, location of disease, diagnostic studies (CT, US, barium enema, and colonoscopy), laboratory findings, type of complication, treatment modality, preoperative diagnosis, operative findings, type of operation, and outcome. The final diagnosis was based on radiographic evidence from CT or US, or operative findings. CT was performed in 138 patients (73%) and US was performed in 114 patients (60.3%). Both CT and US were performed in 80 patients (42.3%) and 17 patients underwent surgery without CT or US. Recurrence of diverticulitis was defined as the presence of the same symptoms and signs leading to re-hospitalization. Recurrence was tracked either by interviewing the patient or by telephone contact.

The data were analyzed using the chi-square test or Fisher’s exact test. All P values of less than 0.05 were considered to be statistically significant.

RESULTS
Characteristics and presentation of patients

Patients were initially managed with medical therapy alone, percutaneous drainage, or an urgent operation. Elective surgery was determined after a cooling-off period. Medical therapy was undertaken in 185 of 189 patients (97.9%), including 22 patients who incidentally underwent an appendectomy for presumed appendicitis (Figure 1). Two patients in stage Ib underwent percutaneous drainage and two patients (one in stage Ib and one in stage III) underwent urgent surgery (1 ileocecal resection, 1 right hemicolectomy). One hundred and eighty three of 185 patients were successfully treated with bowel rest and antibiotics. However, two patients in stage Ib required a resection or surgical drainage because of an inadequate response to conservative treatment. Seven patients who were successfully treated with bowel rest and antibiotics had an elective operation at the surgeon’s request. 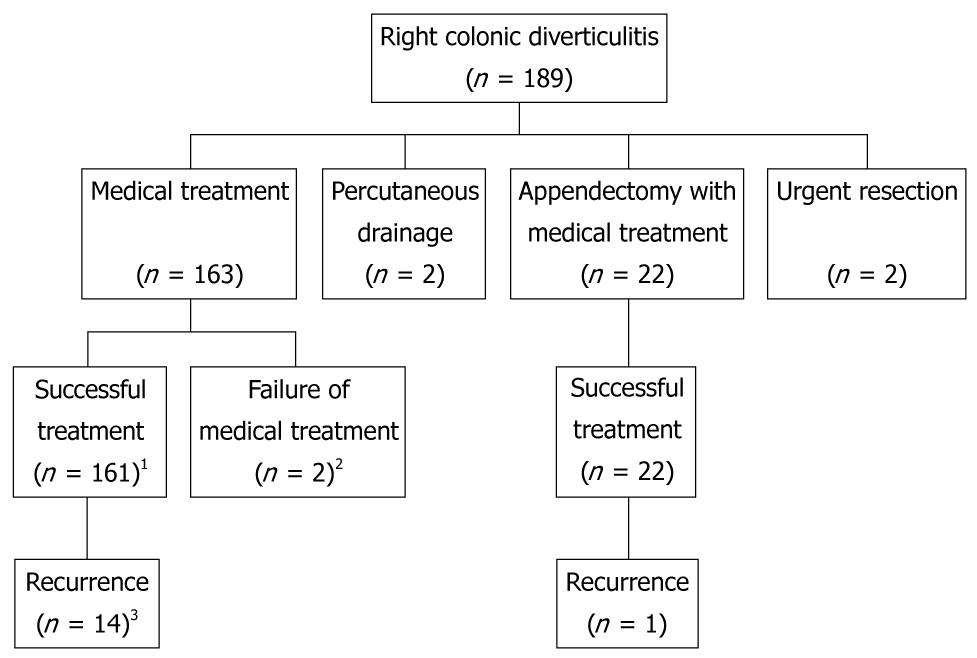 A total of 15 patients underwent colonic resection. Nine of these 15 patients were reported to have multiple false diverticula. The pathologic reports of the other six patients contained no mention of the type of diverticulum.

During the original hospitalization, CT or US was supplemented by colonoscopy or double-contrast barium enema in 31 patients. In addition, 1 mo after recovery from an initial episode of diverticulitis, 60 patients agreed to re-evaluation by double-contrast barium enema (54 patients) or colonoscopy (six patients). In a total of 87 patients, including four patients duplicated, multiple diverticula were reported in 62 patients (71.3%) and a solitary diverticulum was reported in 13 patients (14.9%). The number of diverticulum could not be identified in 12 patients due to poor bowel preparation.

However, some authors advocate surgical resection for right colonic diverticulitis encountered during surgery for presumed appendicitis[3-5]. Lo et al[3] reported their experience of 22 patients over an 11-year period. They performed preoperative US and CT in only one patient. At operation, an inflammatory phlegmon or indurated mass was found in 18 patients, however, colectomy with primary ileocolic anastomosis was performed in 21 patients including these 18 patients. Lane et al[4] reported a series of 49 patients over a 22-year period. The authors stated that because the pathophysiology of cecal diverticula may be different in the Asian population and the recurrence of symptoms may be more common in the Western population, conservative management may not be applicable to the Western population. A correct radiologic diagnosis was preoperatively made in only three patients. Immediate right hemicolectomy was performed in 39 patients at the time of laparotomy, but operative findings or the severity of diverticulitis was not provided. Fang et al[5] analyzed 85 patients during a 5-year period. Thirty four patients had right hemicolectomy, 9 patients had diverticulectomy, and 42 patients received conservative treatment (antibiotics or appendectomy plus antibiotics). In 34 patients receiving right hemicolectomy, the indications for surgery included repeated attack of symptoms in six and phlegmon, abscess, or perforation of the diverticulum in ten. In 42 patients receiving conservative treatment, ten patients developed recurrent diverticulitis and only three of these ten patients had complicated diverticulitis. However, the authors mentioned that the disease process of cecal diverticulitis might not be benign and recurrence of diverticulitis should be an indication for aggressive resection. In the above studies, we guess that all patients who underwent colonic resection would not essentially require surgery, and conservative treatment alone might have been sufficient in some patients. We believe that the correct pretreatment diagnosis for right colonic diverticulitis does not only avoid unnecessary surgery but also allows clinicians to determine optimal management according to the severity of the diverticulitis.

This is an interesting study about right colonic diverticulitis management that has been quite rarely discussed.