We report a case of gastric choriocarcinoma admixed with an α-fetoprotein (AFP)-producing adenocarcinoma. A 70-year-old man was hospitalized for gastric cancer that was detected during screening by esophagogastroduodenoscopy (EGD). Initial laboratory data showed the increased serum level of AFP and EGD revealed a 5-cm ulcerofungating mass in the greater curvature of the gastric antrum. The patient underwent radical subtotal gastrectomy with D2 lymph node dissection and Billroth II gastrojejunostomy. Histopathological evaluation confirmed double primary gastric cancer: gastric choriocarcinoma admixed with an AFP-producing adenocarcinoma and separated adenocarcinoma. At 2 wk postoperatively, his human chorionic gonadotropin and AFP levels had reduced and six cycles of adjuvant chemotherapy were initiated. No recurrence or distant metastasis was observed at 4 years postoperatively. 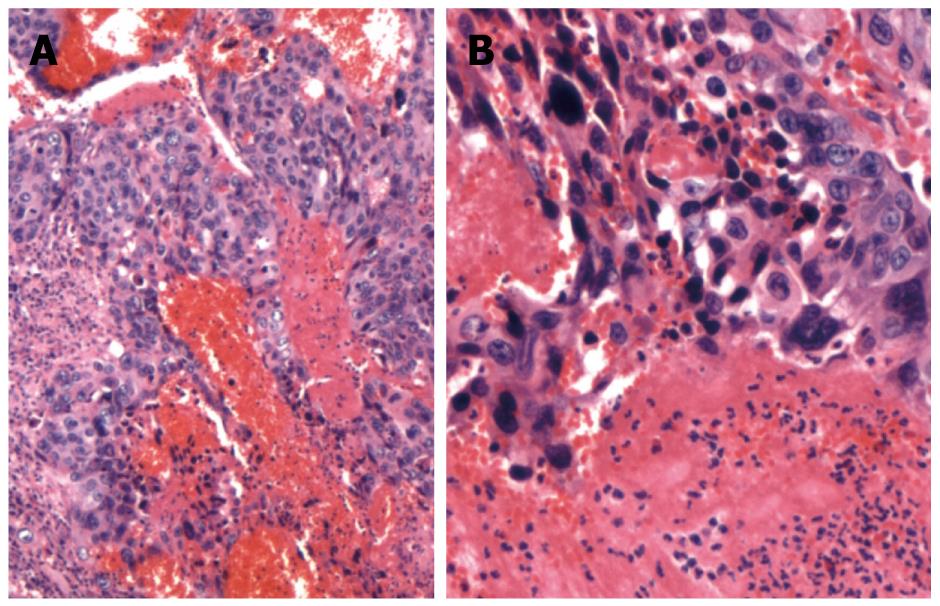 Figure 2 Microscopically, massive numbers of pleomorphic, bizarre tumor cells with hemorrhage were revealed: syncytiotrophoblasts and cytotrophoblasts (HE, A × 40, B × 100). 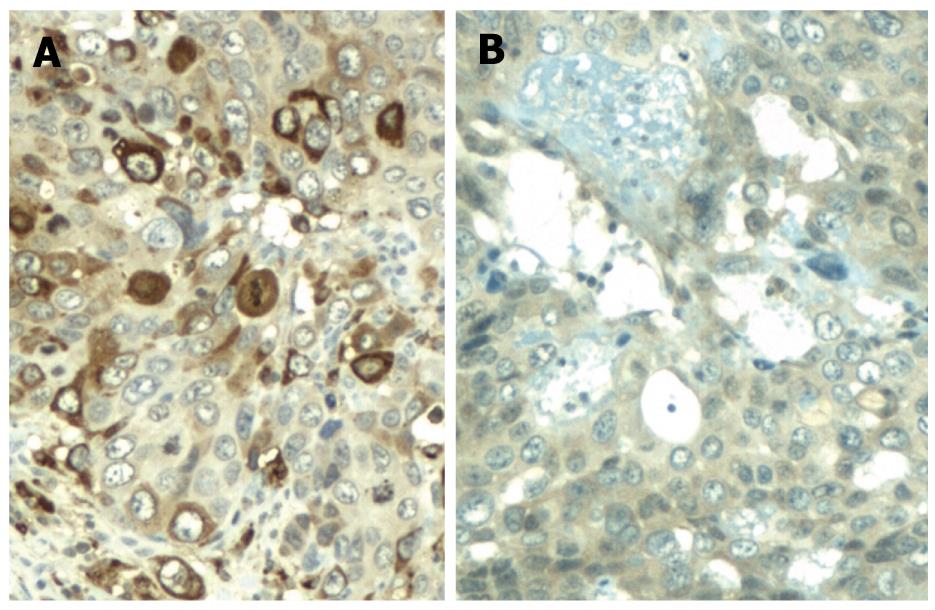 Choriocarcinoma is a rapidly growing, highly invasive, widely metastasizing neoplasm that derives from either trophoblastic or totipotential germ cells. It often arises in the uterus in association with pregnancy, and its most common extragonadal sites are the mediastinum, ovary and testis[1].

Primary gastric choriocarcinoma (PGC) is a rare neoplasm that constitutes less than 1% of all gastric cancers[2]. It was first described by Davidsohn in 1905 and more than 140 cases have been reported in the international medical literature. Several studies have indicated that the pathogenesis of PGC can be explained by the dedifferentiation of malignant adenocarcinoma tissue to the level of the embryonal ectoderm, and the retention of an ability to form trophoblasts[3]. However, the clinicopathological and prognostic factors of PGC are unreliable because of the small numbers of PGC cases reported.

α-fetoprotein (AFP) is a fetal serum protein that is produced by fetal liver and yolk sac cells, and some fetal gastrointestinal cells. AFP levels decrease gradually after birth and reach adult levels at 8-12 mo. However, AFP levels are elevated in patients with hepatocellular carcinoma and in those with non-cancerous liver disease associated with liver regeneration. AFP-producing tumors have been reported in several different organs, and commonly in the stomach[4-8]. The proportion of gastric cancers that secrete AFP has been reported to be 2.7%-8.0%[9]. AFP-producing gastric carcinomas have high proliferative activity and are associated with low levels of apoptosis and rich neovascularization. They are divided into three subtypes: hepatoid, yolk sac tumor-like, and fetal gastrointestinal[10]. Here, we report the case of a 70-year-old man with gastric choriocarcinoma admixed with AFP-producing adenocarcinoma.

A 70-year-old man was referred to our hospital for gastric cancer that was detected during screening by esophagogastroduodenoscopy (EGD). No significant medical history was identified, except dysuria caused by bladder contraction. Initial laboratory data showed a serum level of AFP of 32.3 ng/mL (normal range: 0-15 ng/mL), but no other abnormality, which included other tumor markers, such as, carcinoembryonic antigen (CEA) and carbohydrate antigen 19-9 (CA19-9). EGD revealed a 5-cm ulcerofungating mass that was comprised of three septate ulcers in the greater curvature of the gastric antrum. A pathological examination of endoscopic biopsy tissues confirmed the presence of moderately differentiated tubular adenocarcinoma. Subsequent abdominopelvic computed tomography visualized a gastric mass with deep ulceration in the gastric antrum with perigastric lymph node enlargement. No metastatic lesions were observed in the liver, lung or peritoneum, and chest radiography showed no significant findings.

Radical subtotal gastrectomy with D2 lymph node dissection and Billroth II gastrojejunostomy were performed. Grossly, the resected specimen contained double lesions: the first was a 5.8 cm × 3.2 cm ulcerofungating mass in the antrum, with extensive hemorrhage and light gray fibrosis; and the second was a nearby 2.5 cm × 2.0 cm ulcerative lesion (Figure 1).

Microscopically, massive numbers of pleomorphic, bizarre tumor cells with hemorrhage (syncytiotrophoblasts and cytotrophoblasts) were observed in the first lesion. Hematoxylin and eosin (HE)-stained tissues revealed a bubbly purple cytoplasm and giant nuclei at a magnification of 40 × (Figure 2A) and 100 × (Figure 2B). The tumor involved the proper muscle layer (T2a) and metastasis was found in four of 56 regional lymph nodes (N1). Immunohistochemical staining showed positive immunoreactivity for β-human chorionic gonadotropin (HCG) (Figure 3A) and focal positivity for AFP (Figure 3B). These findings confirmed the presence of gastric choriocarcinoma that contained small foci of an AFP-producing adenocarcinoma. The second lesion was moderately differentiated tubular adenocarcinoma, which extended to the submucosal layer (T1b). It was close to, but distinct from the first lesion, which was negative by immunohistochemical staining for β-HCG and AFP.

The patient had an uneventful postoperative course and was discharged on postoperative day 9. Two weeks later, his HCG level was 176 mIU/mL (normal range: 0-10 mIU/mL) and his AFP level was 10.0 ng/mL. Six cycles of adjuvant chemotherapy with capecitabine (Xeloda; Hoffmann-La Roche Inc., Nutley, NJ, USA) was started at 2500 mg/m2 per day for 14 d/cycle. After two cycles, his β-HCG level had declined to < 3 mIU/mL, and has since remained at this level. No recurrence or distant metastasis had occurred at his 4-year postoperative follow-up.

Several theories have been proposed to explain the histopathogenesis of primary choriocarcinoma of the stomach. These hypotheses include an origin from a gonadal angle displaced in the abdomen[11], a histological resemblance to choriocarcinoma[1], an origin from an underlying gastric teratoma[12], and the dedifferentiation or opisthoplatia of carcinoma cells to the level of the embryonal ectoderm with an ability to form trophoblasts[13]. Of these, the dedifferentiation theory, proposed by Pick in 1926, is accepted most widely. Based on the observation that many cases of PGC have been found with coexistent adenocarcinoma, Pick proposed that choriocarcinoma could arise by overgrowth and elimination of the original adenocarcinoma[4]. Furthermore, the findings of a comparative genomic hybridization and fluorescence in situ hybridization study by Liu et al[14] support this theory; they have concluded that PGC possesses genetic characteristics of adenocarcinoma and gestational choriocarcinoma.

Of the three subtypes of AFP-producing gastric cancers, the described case was of the fetal gastrointestinal type that appeared to develop as a result of fetal gastrointestinal epithelium recapitulation in a tubular adenocarcinoma. The clinical implications of the three subtypes have not been evaluated, although the best-characterized hepatoid type, which is the most common, is known to have a high malignant potential and to be associated with poor survival[15].

The prognosis of PGC is poor because of its high metastatic potential, especially to the liver, lung and regional lymph nodes, and most PGC patients succumb within a year of operation. Therefore, the treatment of choice for PGC is controversial, especially palliative gastric resection. However, in several cases, curative resection and adjuvant chemotherapy (such as 5-fluorouracil and cisplatin combination) have been found to promote long-term survival[1].

In conclusion, the described case suggests that gastric choriocarcinoma admixed with an AFP-producing adenocarcinoma has a good prognosis. Curative resection, appropriate chemotherapy, and the absence of synchronous liver metastasis are considered favorable prognostic factors in PGC. Further evaluations of its pathogenesis and of the cause of its good prognosis are necessary.