Many studies have established the role of radiofrequency (RF) ablation as a minimally invasive treatment for liver metastases. Although relatively safe, several complications have been reported with the increased use of RF ablation. We describe here a case of unexplained liver laceration after a RF procedure. A woman who presented a solitary metachronous liver metastasis underwent RF ablation treatment for this lesion. Six hours later the patient displayed fatigue and pallor. Emergency blood tests showed a haemoglobin level of < 7 g/dL and markedly elevated transaminase levels. A computed tomography examination revealed two areas of liver laceration with haematoma, one of them following the path of the needle and the other leading away from the first. Following a blood transfusion, the patient was haemodynamically stable and completely recovered 24 h later. The patient remained in bed for 1 wk. No surgical intervention was required, and she was discharged 1 wk later. 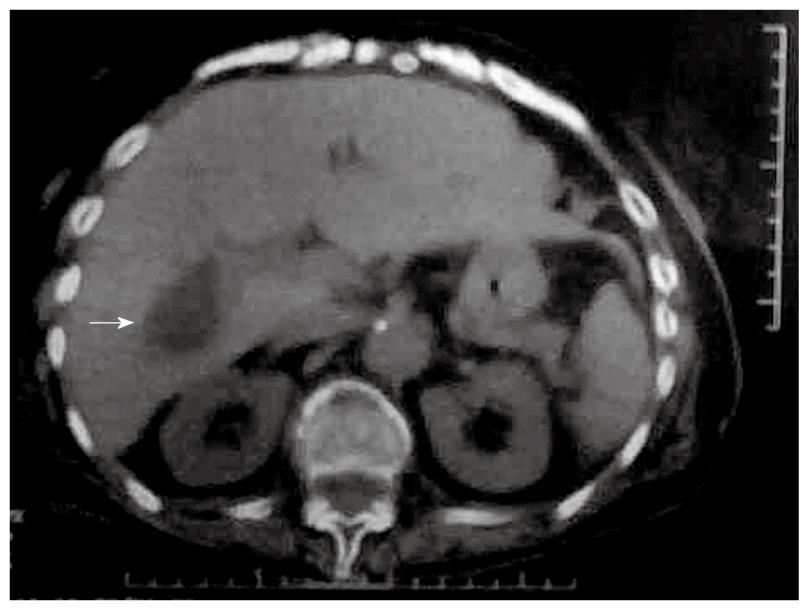 Many studies have demonstrated the benefits of radiofrequency (RF) ablation as a minimally invasive treatment for hepatic metastases from colon carcinoma[1-3]. Good outcomes with low morbidity and mortality have been identified. Therefore, the use of RF ablation is increasing in the field of oncology[4,5]. Although a wide spectrum of complications has been described, all of these complications occur at low frequencies. Haemorrhage is the most common complication, mainly related to mechanical injury of the blood vessels in patients with cirrhosis, and it is probably exacerbated by a coagulation deficit and the rich blood supply of the tumour[6].

We present here a case of multiple liver haematomas occurring as a secondary response to RF ablation of a solitary metastasis.

A 72-year-old woman underwent RF ablation for the treatment of a metachronous solitary liver metastasis from rectal adenocarcinoma, which had been treated 18 mo before with preoperative chemoradiotherapy and anterior resection. The lesion was located in segment VIII.

The procedure went well and the patient was initially haemodynamically stable. One hour later her condition suddenly worsened. She was clinically dizzy and had fatigue and pallor. We detected hypotension and tachycardia. Emergency blood tests showed a haemoglobin level of < 7 g/dL and markedly elevated transaminase levels. A computed tomography examination revealed an accumulation of intraperitoneal fluid in the pelvis and two liver haematomas. The images showed two liver lacerations, one following the path of the needle (Figure 1A-C) and another, unexplained laceration leading away from the first (Figure 2). The patient had no serious coughing or hiccupping after the RF treatment, or any other complications that might have caused increased abdominal pressure and tumour rupture.

RF ablation is a minimally invasive treatment of hepatic metastases from colon carcinoma, and can achieve good outcomes with low morbidity and mortality rates. Therefore, the use of RF ablation is increasing in the field of oncology[1,2]. Although some studies which included large numbers of patients have found low rates of complications after RF ablation of hepatic tumors (ranging from 2.4% to 8.9%), the rate of intraperitoneal haemorrhage is low (0.46%-1.6%) but relevant because this technique is increasingly used with few selection criteria for patients[6]. The etiology of this potentially grave complication is variable.

The reported reasons for haemorrhage are usually related to mechanical injuries to the liver blood vessels and occur most often in patients with cirrhosis, and are probably due to a coagulation deficit and the rich blood supply of the tumour[4,6]. Other cases have been attributed to serious coughing or hiccups after the RF treatment[7]. These complications might cause increased abdominal pressure and tumour rupture, particularly if the tumour location is near the capsule[6].

Liver laceration has rarely been described as a cause of haemorrhage. Although this latter complication is very infrequent, it has been reported, and has been associated with inappropriate electrode positioning or mechanical injury of the soft liver during the procedure[8]. Such mechanical injury can be induced by coughing or position changes, causing increasing abdominal pressure, and possibly displacing the electrode slightly[8].

In our case the procedure went well, without incident, and the patient did not present any of the complications described above, such as coughing or hiccups. The tumour was not located near the capsule but at a depth within segment VIII.

We suggest that these two lacerations might have resulted from direct mechanical injury due to penetration by the electrode into liver tissues that were soft and damaged as a result of prior treatment with chemotherapy. The second laceration may have occurred due to difficulty in positioning the electrode to access such a profound lesion, causing liver disruption away from the first laceration.