We report a case of two pseudolymphomas of the liver in a 63-year-old Japanese woman with primary biliary cirrhosis. One of the lesions was found incidentally during a medical examination, presenting as a 10 mm hypodense nodule that revealed hyperdensity in the early phase and hypodensity in the late phase in computed tomography (CT) after injection of contrast medium. Retrospectively, the 10 mm nodule had first been discovered as a 4 mm nodule during CT 4 years previously. Superparamagnetic iron oxide-enhanced MRI revealed another 4 mm hyperintense nodule in segment 6 in addition to the 10 mm hyperintense nodule in segment 7. CT during arterial portography revealed two hypointense nodules. Findings with other imaging modalities such as ultrasonography, magnetic resonance imaging, and hepatic angiography were consistent with hepatocellular carcinoma. A right posterior segmentectomy was performed, and the lesions were microscopically diagnosed as pseudolymphoma. To the best of our knowledge, only 31 other cases of this disease have ever been reported, with a highly asymmetrical male:female ratio of 1:9.7. Although we could find only one case of transformation of hepatic pseudolymphoma into lymphoma in the liver, the exact nature of development from benign pseudolymphoma to malignant lymphoma is still not fully understood and cases of hepatic lymphoma need to be followed carefully. 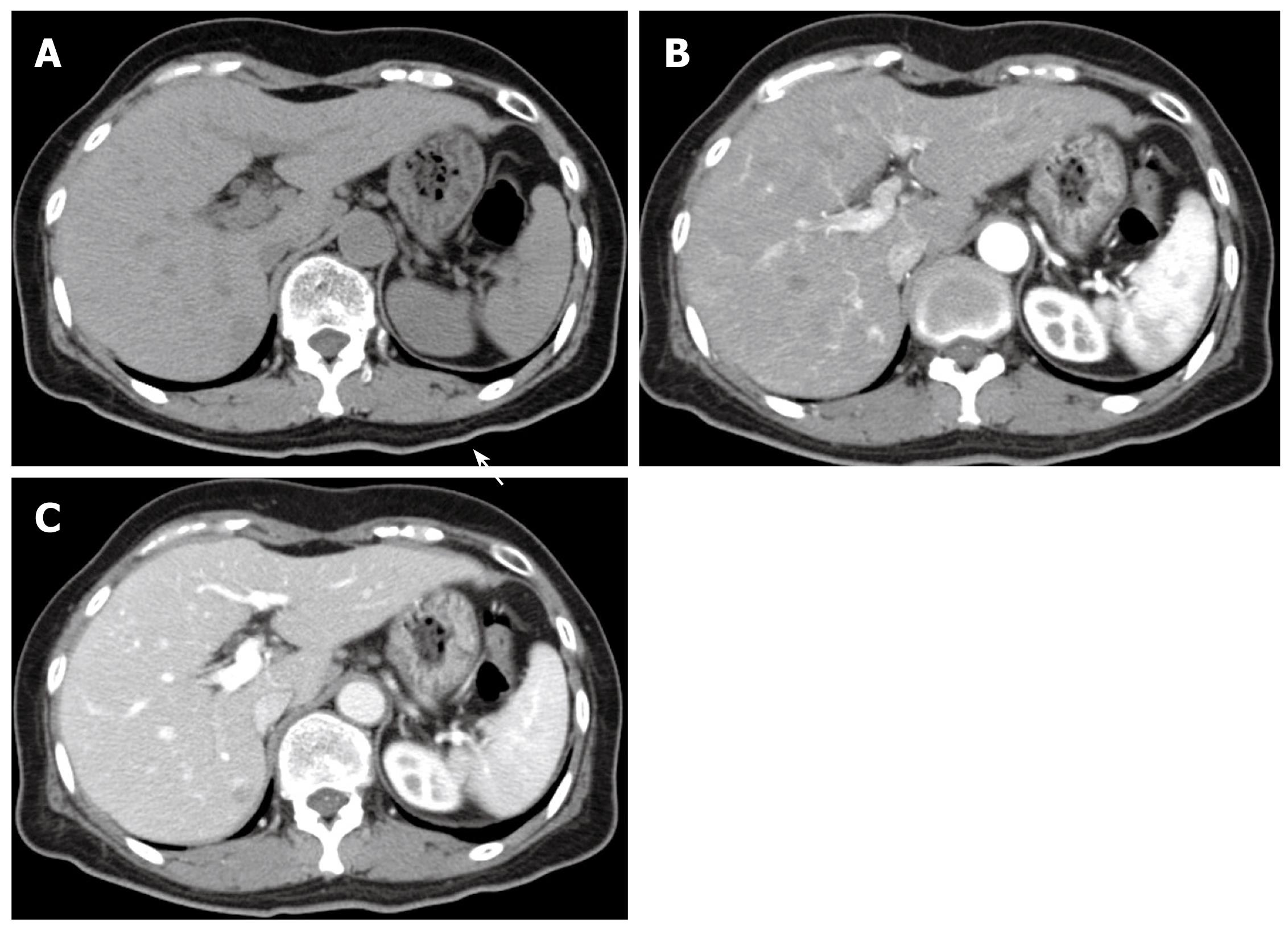 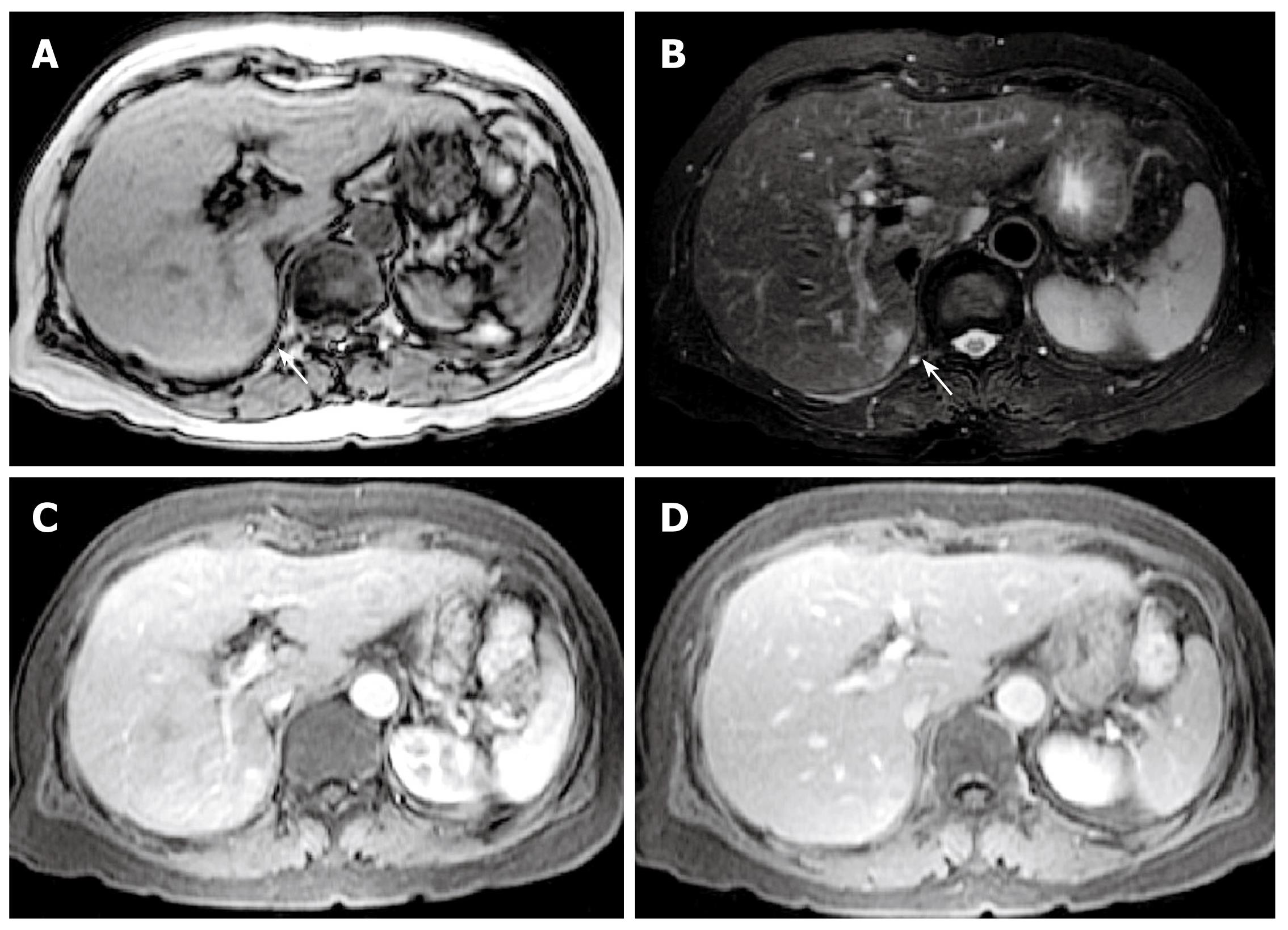 Figure 5 The pathological findings of the lesions. A: Macroscopically, the lesion was white and hard with a clear margin (a lesion in segment 7); B: Microscopically, the lesion consisted of a nodular lymphoid infiltrate with germinal centers (a lesion in segment 7), HE stain (× 40); Lymphocytes in the lesions consisted of CD3-positive T-cells (C) and CD20-positive B-cells (D), Both × 100; E: Stained for κ light chains with in situ hybridization (× 200); F: Stained for λ light chains with in situ hybridization (× 200).

Pseudolymphoma in the liver is an extremely rare disease. Although the exact etiology remains unknown, it is speculated that the disorder is a reactive immunological response to a chronic infection or inflammation[1]; hepatic pseudolymphoma can develop in patients with autoimmune diseases[2,3], malignancy[4], or hepatitis[5] or who are administered interferon therapy[6]. It has been reported that diagnosis of pseudolymphoma is difficult without histopathological examination, since image findings are quite similar to hepatocellular carcinoma (HCC)[2]. Although pseudolymphoma is generally thought to be benign, the risk of malignant transformation into lymphoma remains controversial.

We report a case of hepatic pseudolymphoma in a female Japanese patient with primary biliary cirrhosis (PBC) and discuss the literature.

A 63-year-old female with a history of PBC and resection of the left adrenal gland for primary aldosteronism, was admitted to our hospital for further evaluation of a hepatic lesion incidentally discovered in abdominal computed tomography (CT). The patient had taken only ursodeoxycholic acid 300 mg/d for PBC for 10 years and had not taken immunosuppressive agents. The patient was asymptomatic on admission and her condition was generally good. She had a surgical scar on her abdomen. We noted no hepatospenomegaly, lymphadenopathy, or peripheral edema. Laboratory tests showed a prothrombin time of 11.8 s (normal, 10.8-13.3), a total bilirubin level of 0.6 mg/dL (normal, 0.3-1.2), and an albumin level of 4.0 g/dL (normal, 4.0-5.0). Her serum alkaline phosphatase level was 350 IU/L (normal, 115-359), γ-glutamyltransferase 48 IU/L (normal, 10-47), aspartate aminotransferase 24 IU/L (normal, 13-33), and alanine aminotransferase 16 IU/L (normal, 6-27). Serology examinations for hepatitis B and C viruses were negative. Rheumatoid factor antibodies, Sjögren syndrome-A antibodies, and Sjögren syndrome-B antibodies were negative. Antinuclear antibodies and antimitochondrial antibodies were positive. Immunoglobulin G, immunoglobulin M, and immunoglobulin A were within normal ranges. Alpha-fetoprotein, protein induced by vitamin K absence, and carcinoembryonic antigen were within normal ranges. A urea breath test was negative. Abdominal ultrasonography showed a hypoechoic lesion, 10 mm in diameter in segment 7 (data not shown). CT demonstrated a 10 mm hypodense nodule that revealed hyperdensity in the early phase and hypodensity in the late phase after injection of contrast medium (Figure 1). Retrospectively, this nodule had previously shown up as a 4 mm nodule in a CT performed for examination of an adrenal tumor 4 years previously (data not shown). Magnetic resonance imaging (MRI) showed a hypointense nodule on T1-weighted images and a hyperintense nodule on T2-weighted images in segment 7. Following injection of contrast MRI, a hyperintense nodule in the arterial phase and a hypointense nodule in the portal phase were revealed (Figure 2). Superparamagnetic iron oxide-enhanced MRI revealed another 4 mm hyperintense nodule in segment 6 in addition to the 10 mm hyperintense nodule in segment 7 (Figure 3). Although angiography via the common hepatic artery did not demonstrate tumor staining, CT during arterial portography revealed two hypointense nodules (Figure 4). Imaging findings suggested HCC, although no other hypervascular tumor could be excluded. The patient received an explanation of the results, including the possibility of a benign tumor, and expressed a desire for surgical extraction of the nodules. A right posterior segmentectomy was performed. Macroscopically, the lesion in segment 7 was white and hard with clear margins (Figure 5A) and the lesion in segment 6 was not detected. Microscopically, two lesions showed similar histological features. The lesions exhibited a nodular infiltration of mature small lymphoid cells with many lymph follicles. No obvious atypical cells were identified in both lesions. Bile ducts were identified at the periphery of the lesions, although characteristic lymphoepithelial lesions could not be identified. No necrosis or granulomatous inflammation was identified (Figure 5B). Pseudolymphoma and extranodal marginal zone B-cell lymphoma (MALToma) were differential diagnosis. Then, we performed immunohistochemical analysis and in situ hybridization. Immunostainings for CD3, CD20, and CD79 revealed regularly distributed T cells and B cells (Figure 5C and D). Plasma cells were not many in number in the lesions, but in situ hybridization for immunoglobulin light chains was performed because it is one of the useful tools to discriminate between reactive lymphoid lesions and MALToma. In situ hybridization revealed no significant difference between the numbers of cells positive for kappa-chain and lambda-chain (Figure 5E and F). Based on these histological features, the lesions were diagnosed as pseudolymphoma.

In the background liver, liver parenchyma showed bridging fibrosis with lymphoid infiltrate in portal tracts. Granulomas cholangitis and ductopenia were identified. Those histological features were consistent with Stage 2 PBC. The patient had an uneventful postoperative course and has shown no sign of recurrence for 11 mo.

To the best of our knowledge, 32 cases (including ours) of hepatic pseudolymphoma have been reported in the English and Japanese literature (Table 1). There was a strongly asymmetric male-to-female ratio of 1:9.7 (3 M/29 F). While other sites of pseudolymphoma also tended to show asymmetry, only pseudolymphoma of the breast approached that of the liver in terms of asymmetry magnitude. All seven reported cases of breast pseudolymphoma were female[12], but breast examination is limited almost exclusively to females, which could bias these findings. Reported male-female ratios of pseudolymphoma of the hard palate and oral mucosa[10], lung[8], and skin[11] were 1:2.8, 1:1.2 and 1:1.8, respectively, while ocular adnexal lymphoid hyperplasia affects men and women about equally[9]. Thus the extreme female asymmetry of hepatic pseudolymphoma is a unique characteristic.

Eight of 32 cases of hepatic lymphoma were associated with autoimmune disease and eight with malignant tumor (Table 1). In the lung, cases of pseudolymphoma associated with autoimmune disorders such as Sjögren’s disease were reported[13], which is similar to the liver. In other organs, several factors are thought to be associated with pseudolymphoma, i.e. Epstein-Barr virus (hard palate and oral mucosa[14]), mechanical stimulation (ear[15]), anticonvulsant drugs (skin[16]) and Helicobacter pylori (H pylori) (stomach[17,18]). Regarding the association of H pylori with gastric pseudolymphoma, successful treatment of the pseudolymphoma by eradication of H pylori has been reported[19]. Ota et al[20] reported a case of hepatic pseudolymphoma in which the diameter decreased after H pylori eradication. In the case reported here, the patient had no H pylori infection.

Transformation of pseudolymphoma to lymphoma has been discussed. Malignant transformation of pseudolymphomas in the lung[21] and stomach[22] have been reported. These reports, however, either predated or did not include the use of immunofluorescent techniques. It is likely that these cases were in fact the early stage of primary lymphoma misinterpreted as benign[8]. On the other hand, evidence of progression from histologically benign, immunohistochemically polyclonal lymphoid infiltrates to malignant lymphoma in cutaneous pseudolymphoma is well delineated in the literature[23]. A potential association between lymphoma and PBC is suggested on the basis of individual reports in the literature[24-29]. In a retrospective study by Panjala et al[30] based on an estimated 2,912 patients evaluated at their institution during a 22-year period, only 13 (an estimated 0.6%) patients were evaluated in referral visits for evidence of lymphoma. Although we could find one case of transformation of hepatic pseudolymphoma into lymphoma[31], we were unable to deduce the long term natural course of hepatic pseudolymphoma since most reported cases of hepatic lymphoma underwent surgical resection.