AIM: To describe a condition that we define as early graft dysfunction (EGD) which can be identified preoperatively.

METHODS: Small-for-size graft dysfunction following living-related liver transplantation (LRLT) is characterized by EGD when the graft-to-recipient body weight ratio (GRBWR) is below 0.8%. However, patients transplanted with GRBWR above 0.8% can develop dysfunction of the graft. In 73 recipients of LRLT (GRBWR > 0.8%), we identified 10 patients who developed EGD. The main measures of outcomes analyzed were overall mortality, number of re-transplants and length of stay in days (LOS). Furthermore we analyzed other clinical pre-transplant variables, intra-operative parameters and post transplant data.

CONCLUSION: EGD can be identified preoperatively and is associated with increased morbidity after LRLT. A prompt recognition of EGD can trigger a timely treatment. 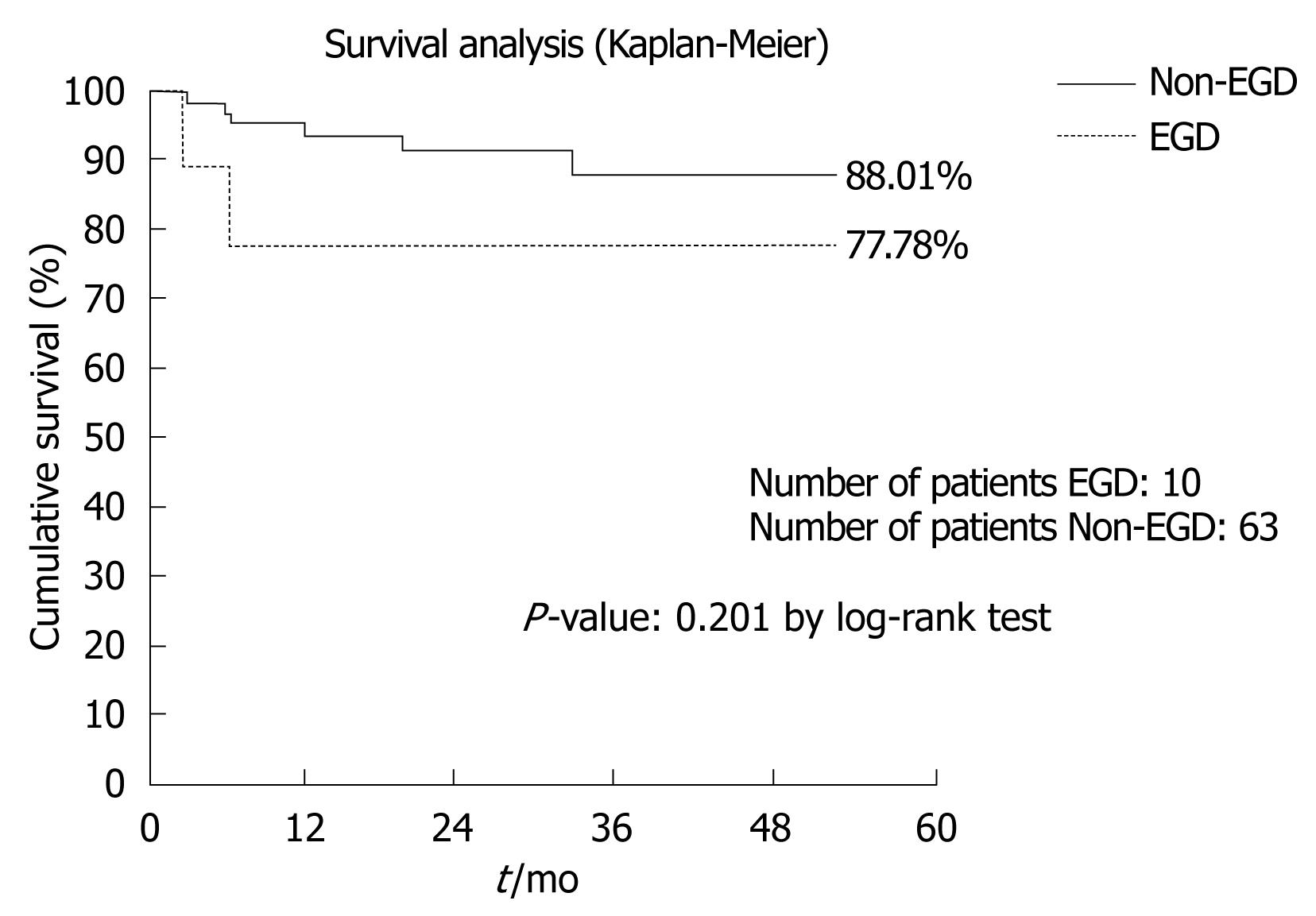 Small-for-size graft dysfunction (SFSGD) is one of the greatest limiting factors for the expansion of segmental liver transplantation from living donors[1], and is characterized by: (1) onset within 2 wk after living-related liver transplantation (LRLT); (2) a graft-to-recipient body weight ratio (GRBWR) below 0.8%; (3) total bilirubin higher than 5 mg/dL, and/or output of ascites through abdominal drainages of more than 1 L/d; and (4) exclusion of technical (e.g. arterial or portal occlusion, outflow congestion, bile leak), infective (e.g. sepsis) and immunological (e.g. acute cellular rejection) complications.

By definition, SFSGD can be diagnosed only in the presence of a GRBWR of less than 0.8%, or a ratio of graft volume (GV) relative to the standard liver volume (SLV) of the recipient (GV/SLV) of less then 30%[1-4]. However, despite a GRBWR above 0.8%, some recipients of LRLT may have a worse clinical course.

The aim of this study was to analyze a group of LRLT recipients in order to identify those who developed a clinical picture of SFSGD in the absence of a GBWR of < 0.8% and with a GV/SLV ratio highest than 30%. Those patients were defined as affected by early graft dysfunction (EGD).

There were 43 males and 30 females, with a median age of 57 years (range 18-68 years). The etiology of the liver disease was related to hepatitis C virus infection in 47 cases, to hepatitis B virus infection in nine patients, to both B and C virus infection in three patients, and to non-viral causes in 14 patients. Twenty-two patients had hepatocellular carcinoma (HCC). Donor liver resection resulted in 73 right hepatectomies (liver segments 5-8). Graft implantation was performed with the piggy back technique and, in all cases, with the use of veno-venous bypass. Details of surgical procedures are reported elsewhere[5,6]. Volumetric computed tomography (CT) scan was used to calculate liver and spleen volumes.

The main measures of outcomes analyzed were overall mortality, number of re-transplants and length of stay in days (LOS).

Finally as post transplant data we looked at the LOS.

The 4-year actuarial patient survival was 77.78% vs 88.01%, (P = 0.201 by the log-rank test) (Figure 1). Although the statistical analysis doesn’t indicate any statistical significance, probably due to the small size of the sample examined, the survival analysis points out a lower survival rate (77.78%) on the EGD patient vs non-EGD patient (88.01%); this is clinically relevant.

In the EGD patients, we observed two deaths: one because of sepsis and the second one due to multiorgan failure. In the non-EGD group, we observed six deaths: three because of neoplastic recurrence of HCC and three due to multiorgan failure. HCC recurrence could be explained by the advanced stage of the tumor at the pathologic examination, although the patients were classified within Milan criteria.

At univariate analysis of the variables collected, INR, platelet count, serum bilirubin and Meld-Na score, were identified as predictors of EGD (Table 3).

In conclusion, the main clinical outcomes of the two groups were not statistically significant in terms of both early and late patient survival, probably because of the small size of the sample. In fact, as the survival rate was 77.78% vs 88.01% for EGD and non-EGD patients, we can hypothesize that survival rate acquires a statistically significant difference by enrolling a larger number of patients.

A GRBWR below 0.8% is considered mandatory for the diagnosis of SFSGD. Despite these findings in the literature, there are few patients who fully develop SFSGD by classic definition.

On the other hand, there are many patients who do not do well immediately after LRLT. We observed a clinical picture similar to that of SFSGD in patients who received partial livers that could not be described as small (GRBWR > 0.8).

In this study, the relevant clinical impact of EGD is suggested by the reduced 3-mo and 1-year patient survival and the increased graft-loss rate in the group of patients with this condition, even though there was no statistically significant difference, which is probably due to an insufficient sample size (and a small number of events). The increased LOS in the EGD group reflects the increased time of recovery. Those patients who developed EGD were in fact those with worse INR, platelet count and total bilirubin. In addition, as previously reported by Yoshizumi et al[11], we noted that patients with a higher MELD score, higher Child Pugh score and hyponatremia, tended to have a worse outcome.

In fact, in the EGD group (Table 3), these parameters were higher than in the non-EGD patient.

Our data, although not significant in accordance to others[10], are clinically relevant especially at the time of selection of donors and recipient.

Our study was also aimed at finding objective criteria for identifying those patients who had a worse clinical course in the 2 wk after LRLT, and with a GRBWR above 0.8%. Our data support the hypothesis that SFSGD and EGD have a multi-factorial genesis in which the combination of the donor’s factors (GV and quality of the graft) and the recipient’s factors (portal hypertension and stage of liver disease) lead to allograft dysfunction after partial liver transplantation[3,9,10,12].

The clinical variables identified at the univariate analysis as predictors of EGD confirmed the relevant roles of liver disease and portal hypertension in graft dysfunction.

Serum bilirubin, INR, and Meld-Na score are markers of liver function and platelet count is a marker of portal hypertension. However, at the multivariate analysis, the only variables independently associated with occurrence of EGD were Meld-Na score and pre-transplant platelet count.

The transplant community is now focused on the possibility of detecting predictive factors based on simple biochemical and imaging assessments which could allow physicians to treat those patients at risk of EGD immediately after surgery.

It has been demonstrated that in patients with cirrhosis and severe portal hypertension, the occlusion of the splenic artery causes a significant reduction in portal pressure, which is directly related to the spleen volume and indirectly related to the liver volume[13]. This concept is at the center of our strategy for performing early splenic artery embolization for the treatment of SFSGD following LRLT[14].

EGD can be identified preoperatively and is associated with increased morbidity after LRLT. Obviously, a prompt recognition of EGD can trigger a timely and appropriate treatment.

The study was aimed at finding objective criteria for identifying those patients who had a worse clinical course in the 2 wk after LRLT and had a GRBWR above 0.8%. They describe a condition that they define as EGD which can be identified preoperatively and seems to be associated with increased morbidity after LRLT.

A GRBWR below 0.8% is considered mandatory for the diagnosis of SFSGD. Despite the findings in the literature, there are few patients who fully develop SFSGD by classic definition. The authors observed a clinical picture similar to that of SFSGD in patients who received partial livers that could not be described as small (GRBWR > 0.8).

A prompt recognition of EGD can trigger a timely and appropriate treatment.

The authors describe a condition that they define as EGD which can be identified preoperatively and seems to be associated with increased morbidity after LRLT.

This is an important study which impacts on the field. Gruttadauria and colleagues report herein the parameters which allow preoperative identification of a condition defined as EGD i.e. the transplant Meld-Na score and pre-transplant platelet count. The study is original, well designed and performed.