Infliximab (IFX) is currently the only biologic therapy used in the treatment of moderate-to-severe ulcerative colitis (UC). In the years to come, more biologic therapies will have a role in the management of moderate-to-severe UC. We report on two patients with steroid-dependent UC who, due to adverse reactions to IFX, have been under therapy with adalimumab for two years. Both patients received concomitant immunosuppressive treatment. Long term clinical remission and mucosal healing are described.

Tumor necrosis factor-α (TNF-α) is a proinflammatory cytokine that plays a role in the pathogenesis of inflammatory bowel disease. The introduction of anti-TNF-α agents for the treatment of ulcerative colitis (UC) has been delayed because contrary to Crohn’s disease (CD), UC has classically been considered a T helper cell type 2 (Th2) disease, for which the role of TNF-α is less relevant than that of other cytokines such as interleukin (IL)-10 and IL-5[1]. However, other more recent studies have shown that TNF-α may play a major role in the etiopathogenesis of UC, justifying the use of anti-TNF-α therapies[2].

Infliximab (IFX) is presently the only biologic therapy employed in the treatment of moderate-to-severe UC[3]. With increased use of IFX in UC, cases of intolerance or adverse reaction to this drug are expected. In these clinical situations and based on the data and experience from CD, adalimumab (ADA) is likely to be the next biologic drug to be used in UC. There are currently very few data published regarding the efficacy of ADA in UC. Moreover, the data are short-to-medium term, and there is no evidence of its long-term efficacy.

We report on two patients with moderate-to-severe UC who, due to adverse reactions to IFX, have been under therapy with ADA for two years. Clinical remission and mucosal healing are described.

A 55-year-old male was diagnosed with ulcerative pancolitis in 2003. In 2005 he developed steroid dependence and treatment with azathioprine 2.5 mg/kg was started with clinical response for 1 year. In October 2006, the patient presented both clinical (8 bloody stools per day) and endoscopic relapse (3 points on the Mayo endoscopic subscore). After performing viral serologies, chest X-ray and Mantoux test, treatment with IFX 5 mg/kg was started. At the second dose, he developed a generalized skin rash on both trunk and extremities requiring drug discontinuation. On this basis and after requesting compassionate use, ADA treatment was started with an induction dose of 160 mg at week 0 followed by 80 mg at week 2 and then 40 mg every 2 wk thereafter as maintenance therapy. The patient had a very good clinical response, with normalization of stools after 2 mo. From the onset of treatment and over the subsequent two year period the patient has experienced no new flare and remains in clinical remission. A colonoscopy performed at 2 years from onset of ADA therapy showed no evidence of disease activity and complete mucosal healing (Figure 1A). 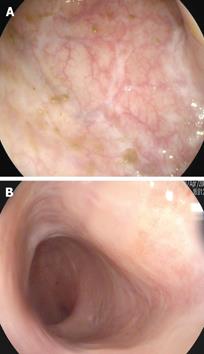 A 29-year-old woman with a previous diagnosis of rheumatoid arthritis was diagnosed with ulcerative pancolitis in 2004. After one year she developed steroid-dependency and treatment with azathioprine 2.5 mg/kg was started. Despite this treatment, she was readmitted to the hospital in March 2006 for a severe relapse. A colonoscopy was performed showing diffuse continuous mucosal disease and multiple erosions with signs of bleeding (2 points on the Mayo endoscopic subscore). Given these findings, it was decided to start treatment with IFX 5 mg/kg after performing the standard pretreatment evaluation for biologic therapies (viral serologies, chest X-ray and Mantoux test). On the second dose of IFX, the patient experienced an adverse drug reaction with difficulty breathing and edema of the face and glottis requiring drug discontinuation. Treatment with ADA was initiated with an induction dose of 160 mg at week 0, followed by 80 mg at week 2 and then 40 mg every 2 wk thereafter as maintenance therapy. The patient did not have any adverse drug reaction, corticosteroids were completely withdrawn and a marked improvement was observed in intestinal and articular symptoms. A colonoscopy performed at 2 years after starting ADA treatment showed absence of acute disease, no friability, and signs of healing, with findings compatible with 0 points on the Mayo endoscopic subscore (Figure 1B).

Our aim in reporting these two cases is to provide information on the clinical and mainly endoscopic long-term efficacy of ADA. Mucosal healing seems to be an important new therapeutic target in inflammatory bowel disease and the complete mucosal healing reported in our two cases seems to confirm the expectations created for ADA in UC, in that it seems to be a reasonable alternative in cases of intolerance or adverse reaction to IFX[8].

The present study is a series of only two cases and solid conclusions cannot be drawn from its findings. We only aim to show that in the presence of severe UC, in patients with an adverse reaction to IFX, ADA treatment is a possible and safe alternative that can maintain long-term clinical and endoscopic remission.