Post-infectious irritable bowel syndrome (PI-IBS) is a common disorder wherein symptoms of IBS begin after an episode of acute gastroenteritis. Published studies have reported incidence of PI-IBS to range between 5% and 32%. The mechanisms underlying the development of PI-IBS are not fully understood, but are believed to include persistent sub-clinical inflammation, changes in intestinal permeability and alteration of gut flora. Individual studies have suggested that risk factors for PI-IBS include patients’ demographics, psychological disorders and the severity of enteric illness. However, PI-IBS remains a diagnosis of exclusion with no specific disease markers and, to date, no definitive therapy exists. The prognosis of PI-IBS appears favorable with spontaneous and gradual resolution of symptoms in most patients.

Irritable bowel syndrome (IBS) is a common gastrointestinal disorder characterized by abdominal discomfort and altered bowel habit with no abnormality on routine diagnostic tests[12]. In some patients, IBS symptoms arise de novo following an exposure to acute gastroenteritis (GE). This phenomenon, known as post-infectious IBS (PI-IBS), denotes the persistence of abdominal discomfort, bloating and diarrhea that continue despite clearance of the inciting pathogen[3–15]. A recent systematic review and meta-analysis demonstrated that the risk of developing IBS increases six-fold after gastrointestinal infection[16] and remains elevated for at least 2-3 years post-infection. The current conceptual framework regarding the pathophysiologic mechanism for PI-BS suggests that PI-IBS is associated with altered motility, increased intestinal permeability, increased numbers of enterochromaffin cells and persistent intestinal inflammation, characterized by increased numbers of T-lymphocytes and mast cells, and increased expression of proinflammatory cytokines[3121718] (Figure 1). This therefore suggests that an exposure to pathogenic organisms disrupts intestinal barrier function, alters neuromuscular function and triggers chronic inflammation which sustain IBS symptoms. We provide herein a review of PI-IBS epidemiology, pathophysiology, and management. 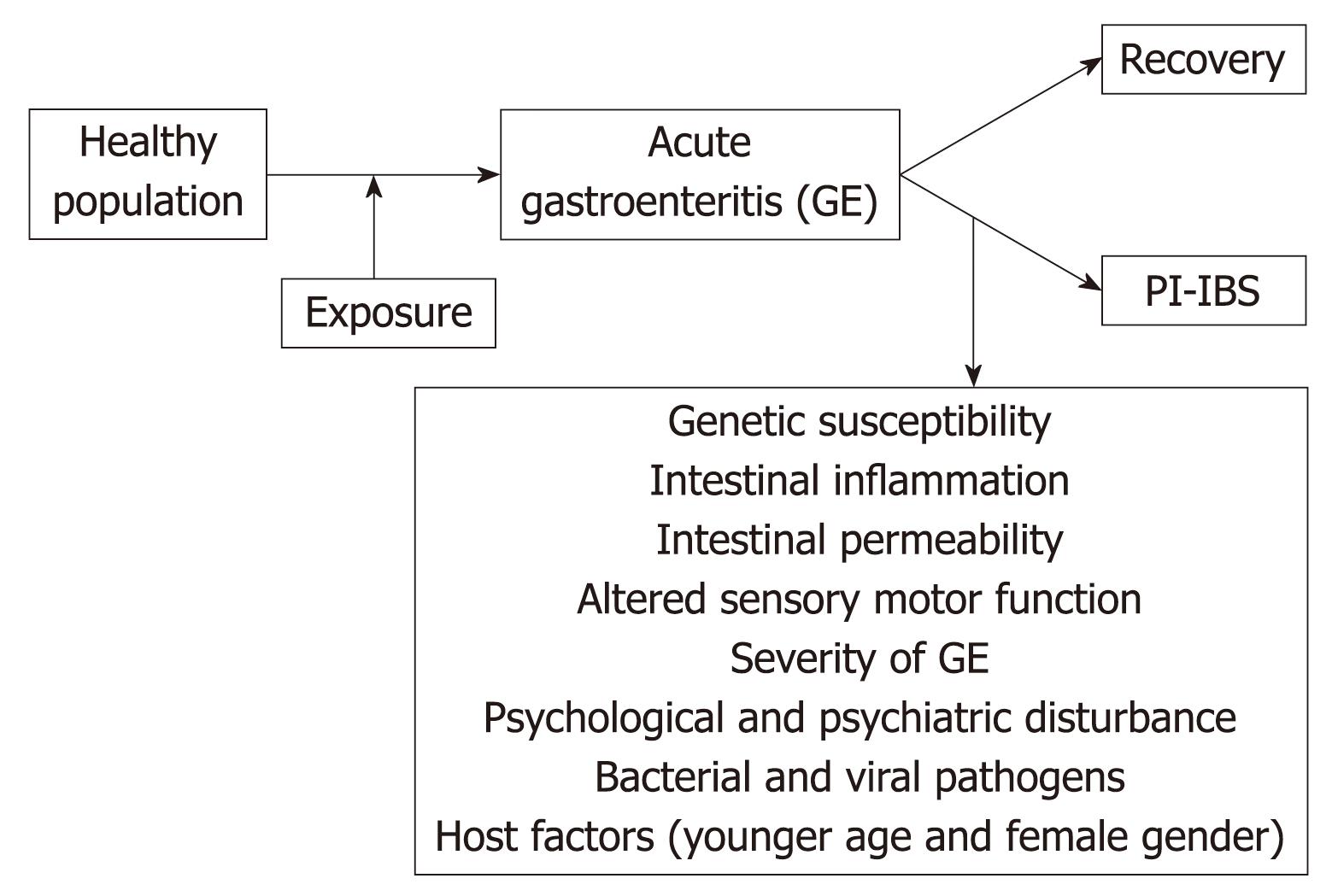 A link between IBS and enteric infection was first proposed by Stewart more than five decades ago[19]. A subsequent retrospective study by Chaudhary and Truelove found that a substantial proportion of patients with IBS reported the onset of their symptoms after an acute episode of GE[20]. Since then, various prospective and retrospective studies from the United Kingdom, North America, Spain, Korea, Israel and New Zealand have reported the incidence or prevalence of PI-IBS to range from 5% to 32%[4–1321–25]. Consistent among these studies is the suggestion that PI-IBS is a global phenomenon, and not unique to any ethnic group or environment. Reported estimates of the prevalence/incidence of PI-IBS vary in part because of differences in study methodology, including the criteria used to define IBS (Table 1). In general, Rome II criteria generate lower estimates than Rome I or III.

Unlike sporadic IBS, PI-IBS has a defined moment of onset. Features of the inciting infectious illness such as diarrhea, abdominal cramps, increased stool frequency, bloody or mucous stools, positive stool culture and weight loss are potent predictors of long term outcome. The risk of PI-IBS appears to correlate with the severity of the acute enteric infection, increasing at least two-fold if diarrhea lasts more than 1 wk and over threefold if diarrhea lasts more than 3 wk[1113]. Abdominal cramps, weight loss and bloody stools are also associated with increased risk, with abdominal cramps increasing the risk fourfold[1112]. Various bacterial pathogens including Campylobacter, Shigella, Salmonella and Escherichia coli (E. coli) 0157:H7[111222–242627] have been implicated in the development of PI-IBS but it remains unclear whether all organisms confer an equivalent risk. Viral GE appears to cause a more transient form of PI-IBS than bacterial pathogen dysentery[10].

Other reported risk factors for PI-IBS include host factors, and psychological disorders[11–13222428]. Despite the fact that there are no reported gender differences in the severity of initial infectious illness or immune response, the reported risk of developing PI-IBS is higher among females than males with an adjusted relative risk ranging from 1.47 to 2.86[11132930]. The female predisposition for PI-IBS may be confounded by a female preponderance of psychological distress. In a study by Gwee et al[22], female gender was no longer a significant risk factor when psychological variables were controlled in a multivariate analysis. In two studies, the risk of developing PI-IBS decreased with increasing age[11] and age above 6 years was reported to have a protective effect with adjusted relative risk of 0.36[13]. Dunlop et al[31] demonstrated that older individuals have fewer lymphocytes and mast cells in the rectal mucosa, which may attenuate the inflammatory response to luminal antigens and yield a reduced risk of IBS.

Just as psychological disorders have been associated with development of sporadic IBS, Sykes et al[32] observed that people with premorbid psychiatric diagnoses, particularly anxiety disorders, are also at increased risk of PI-IBS after acute GE. In addition, depression, neuroticism, somatisation, stress and negative perception of illness have all been linked to PI-IBS[22273033]. In a recent study, patients who developed PI-IBS had significantly higher levels of perceived stress (OR 1.10, 95% CI: 1.02-1.15), anxiety (OR 1.14, 95% CI: 1.05-1.23), somatisation (OR 1.17, 95% CI: 1.02-1.35) and negative illness beliefs (OR 1.14, 95% CI: 1.03-1.27) at the time of infection than those who did not develop PI-IBS[30]. Furthermore, Gwee et al[22] showed that patients who developed IBS reported more life events and had higher hypochondriasis scores. These observations suggest a psychological-environmental interaction wherein exposure to GE may trigger symptoms that are sustained by psychological disturbances[30]. This paradigm provides support for cognitive-behavioral therapy as a treatment for PI-IBS.

PI-IBS patients are more likely than sporadic IBS patients to exhibit a diarrhea-predominant phenotype[111734]. Spiller found that serial intestinal biopsies from patients recovering from Campylobacter jejuni (C. jejuni)showed persistent inflammation with elevated T lymphocytes and calprotectin-positive macrophages, possibly as a response to mucosal injury and inflammation[18]. Dunlop et al[3] noted a 25% increase in rectal enterochromaffin cells in patients with PI-IBS, compared to those with sporadic IBS or healthy controls. Significant increases in postprandial plasma serotonin levels have also been seen in PI-IBS and in sporadic constipation-predominant IBS[35]. Gwee et al[36] reported increased expression of IL-1β in rectal biopsies from patients with PI-IBS, when compared with those who suffered infectious enteritis but did not develop PI-IBS. Wang et al[37] also observed increased IL-1β in patients with PI-IBS after Shigella infection when compared with patients with sporadic IBS[12].

Patients with PI-IBS also demonstrate increased small intestinal permeability compared to non-IBS controls, suggesting a defect in epithelial integrity that might promote intestinal inflammation[18]. In one study, an increased lactulose-mannitol fractional excretion ratio was observed among patients with IBS 2 years after a waterborne outbreak of GE involving C. jejuni and E. coli 0157:H7. In this cohort, increased permeability was associated with increased stool frequency[37]. Similar elevations in gut permeability were also observed by Spiller et al[18]. Increased intestinal permeability can promote inflammation by facilitating exposure of the submucosa to luminal antigens with subsequent disturbance of enteric sensation and motility.

There is evidence that genetic risk factors may contribute to PI-IBS pathophysiology. A recent study by Villani et al[38] identified three candidate gene variants, namely TLR9, CDH1 and IL6, which were associated with development of IBS following acute GE. These observations suggest that PI-IBS might result from abnormalities in genes encoding epithelial barrier functions and innate immune responses to enteric bacteria. This discovery is consistent with a paradigm of PI-IBS pathogenesis involving decreased mucosal barrier function, low grade inflammation, and immune activation in the colonic mucosa. Future studies are needed to confirm these potential candidate gene variant associations.

The prognosis of PI-IBS appears favorable with spontaneous and gradual resolution of symptoms in most patients. In the largest and longest prospective cohort study of PI-IBS, the prevalence of PI-IBS in a Canadian cohort dropped from 31% at 2 years to 23% after 4 years and 17% after 6 years[3940]. After 6 years, the incidence of new IBS was no longer increased among those exposed to the initial infection when compared to unexposed controls. A similar decline was reported in an Asian and in a British study, where half of patients recovered 5 and 6 years respectively, after an exposure to acute GE[4142]. In the same Asian follow up study, a 25% recovery rate was reported 3 years after infection[4]. In studies that have followed patients for only 1 year after outbreaks of bacterial dysentery, the prevalence of IBS has remained relatively stable[2343]. Of note, in the only study to date which has followed an outbreak of viral GE, the prevalence of IBS symptoms remained elevated for only 3 mo after infection[10]. This suggests that viral GE may be associated with a more transient functional disturbance.

To date there exist no therapies proven to be effective specifically for the management of PI-IBS. Because the phenomenon of PI-IBS is clinically indistinguishable from sporadic IBS, conventional approaches to the management of functional bowel disorders should be adopted. Given a limited insight into the pathogenesis of sporadic IBS, these approaches consist largely of non-specific measures intended to relieve symptoms. However, our enhanced understanding of the pathogenesis of PI-IBS provides a compelling rationale for some specific approaches that target key mechanisms. These warrant further study in clinical trials.

Acute GE can shift colonic flora, which may in turn induce or promote many of the changes in physiology noted above. Modulation of the flora with probiotics, antibiotics or prebiotics can down-regulate inflammation, improve barrier function and reduce visceral sensitivity[44–50]. Probiotics have been proven effective in preventing or attenuating acute GE[51–53]. However, no study has yet assessed the efficacy of interventions that modulate gut flora for preventing or treating PI-IBS.

The observed increases in enterochromaffin cell numbers and post-prandial serotonin release in PI-IBS[1833] suggest that serotonergic therapies might prove particularly effective in this population. While the therapeutic gain associated with 5-HT3 antagonists[54–62] and 5-HT4 agonists[63–72] in treatment of sporadic IBS has been small, patients with PI-IBS are relatively more homogeneous and might demonstrate enhanced efficacy. No study of such interventions in the management of PI-IBS has been reported.

There remains little doubt that PI-IBS is associated with persistent intestinal inflammation, and that inflammation itself can disturb gut function and generate symptoms. An underpowered randomized trial of prednisolone for treatment of established PI-IBS failed to show a significant improvement in symptoms, but did show a reduction in intestinal enterochromaffin cell and lymphocyte counts[73]. In animal models, early corticosteroid therapy has been shown to attenuate post-infectious neuromuscular dysfunction[7475]. Hence it remains plausible that corticosteroids given to patients with GE at high risk of PI-IBS would be effective in preventing or attenuating chronic symptoms. Locally active steroids with reduced systemic toxicity, such as budesonide, are particularly attractive for this indication.

PI-IBS is a common complication of acute enteric infection. While the epidemiology and natural history of this clinical phenomenon have been well characterized, our understanding of its pathophysiology remains limited. Future research is needed to further define this complex host-microbe interaction and provide new tools for prevention and management.