Pseudoachalasia due to pleural mesothelioma is an extremely rare condition. A 70-year-old woman presented with progressive dysphagia for solid and liquids and a mild weight loss. A barium swallow study revealed an esophageal dilatation and a smoothly narrowed esophagogastric junction. An esophageal manometry showed absence of peristalsis. Endoscopy demonstrated an extrinsic stenosis of the distal esophagus with negative biopsies. A marked thickening of the distal esophagus and a right-sided pleural effusion were evident at computed tomography (CT) scan, but cytological examination of the thoracic fluid was negative. Endoscopic ultrasound showed the disappearance of the distal esophageal wall stratification and thickening of the esophageal wall. The patient underwent an explorative laparoscopy. Biopsies of the esophageal muscle were consistent with the diagnosis of epithelioid type pleural mesothelioma. An esophageal stent was placed for palliation of dysphagia. The patient died four months after the diagnosis. This is the first reported case of pleural mesothelioma diagnosed through laparoscopy.

Esophageal achalasia is an uncommon disorder, with an incidence of about one case per 100 000 persons per year. The term “pseudoachalasia” generally applies to a subgroup of less than 5% of patients presenting with clinical features of achalasia in whom an occult malignant tumor is the cause of dysphagia[1]. Benign pseudoachalasia is an even more unusual condition, accounting for less than 2% of patients with achalasia-like symptoms[2]. Adenocarcinoma of the esophagogastric junction represents the most frequent diagnosis in patients with malignant pseudoachalasia, accounting for 70% of cases[3]. Other causes include lymphoma[4–6] and primary neoplasms from the lung, esophagus, liver, pancreas, colon, kidney, prostate, and breast[7–14].

A 70-year-old woman presented in December 2007 with a two-month history of progressive dysphagia for solids and liquids, and a 5-kg weight loss. There was no prior history of gastroesophageal reflux, odynophagia, or other gastrointestinal symptoms. Social history was negative for tobacco use and alcohol intake. Physical examination was unremarkable and routine laboratory tests were within normal limits. A barium swallow study revealed a mildly dilated esophagus and a smoothly narrowed esophagogastric junction (Figure 1). An esophageal manometry showed absence of peristalsis (Figure 2), but evaluation of the lower esophageal sphincter was precluded due to the inability to advance the catheter into the gastric cavity. Subsequent upper gastrointestinal endoscopy showed no evidence of gross mucosal lesions, but a mild resistance to the passage of the instrument through the cardia was noted. On retroflexed view, the esophagogastric junction appeared normal. A pneumatic dilation was performed using a 30 mm Rigiflex balloon dilator inflated at 10 PSI for one minute, and multiple esophageal biopsies were performed, which showed no evidence of malignancy. 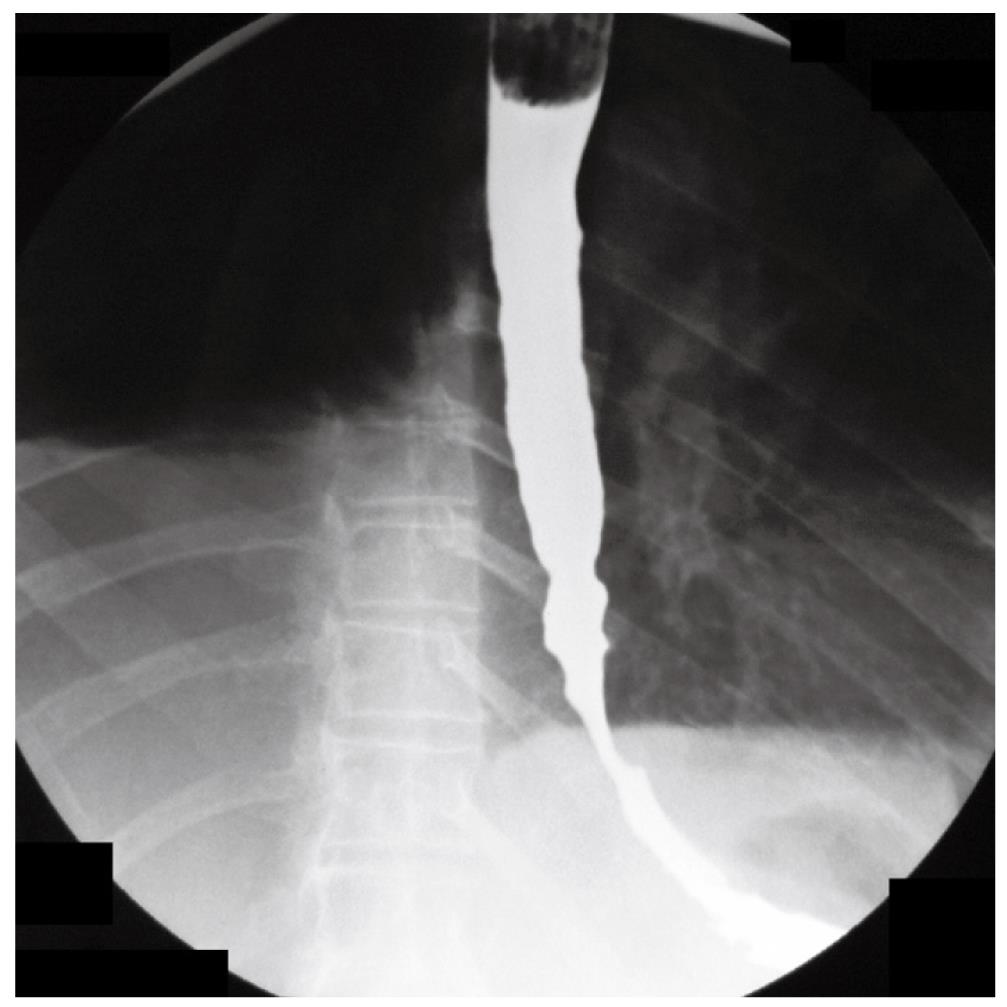 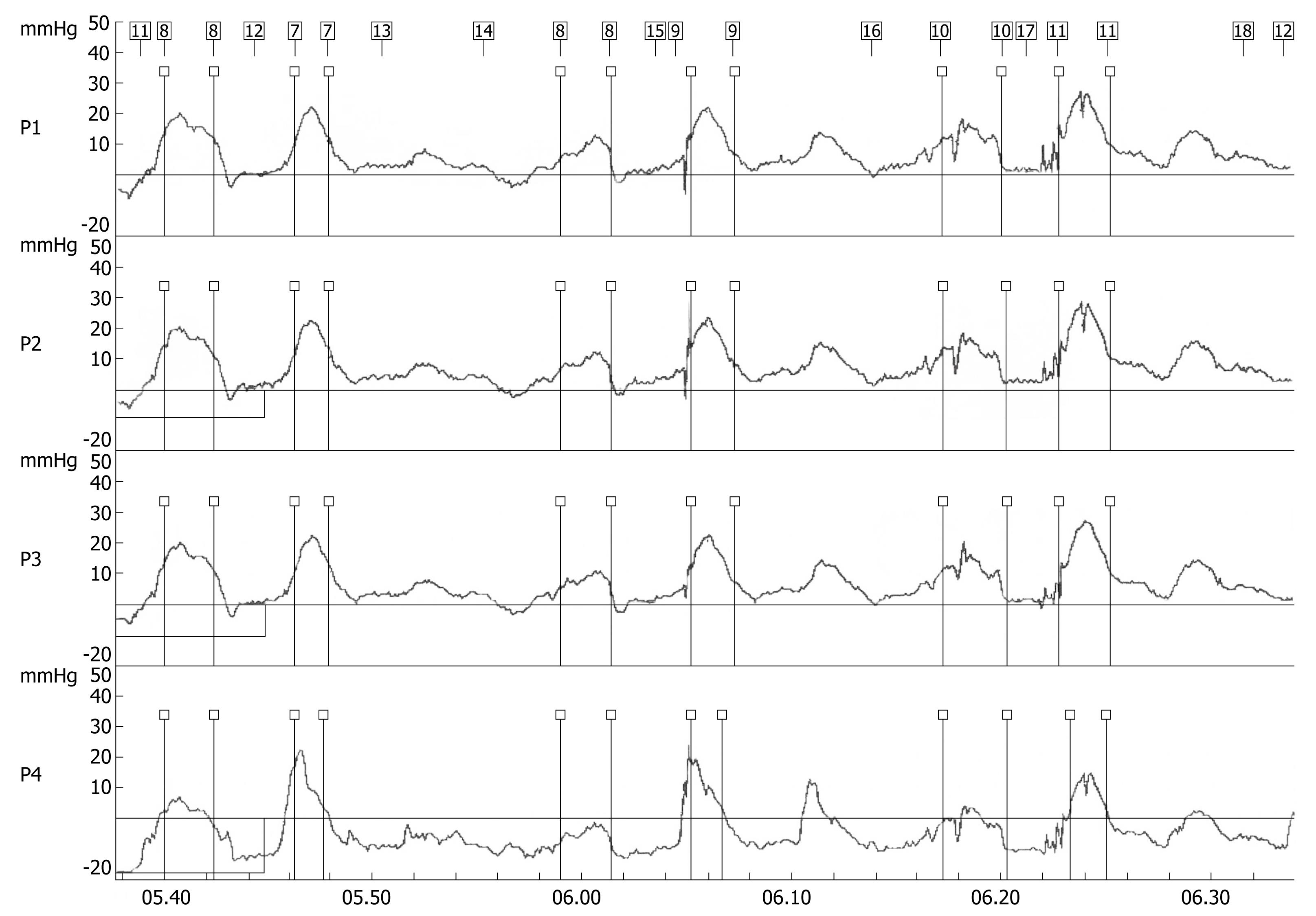 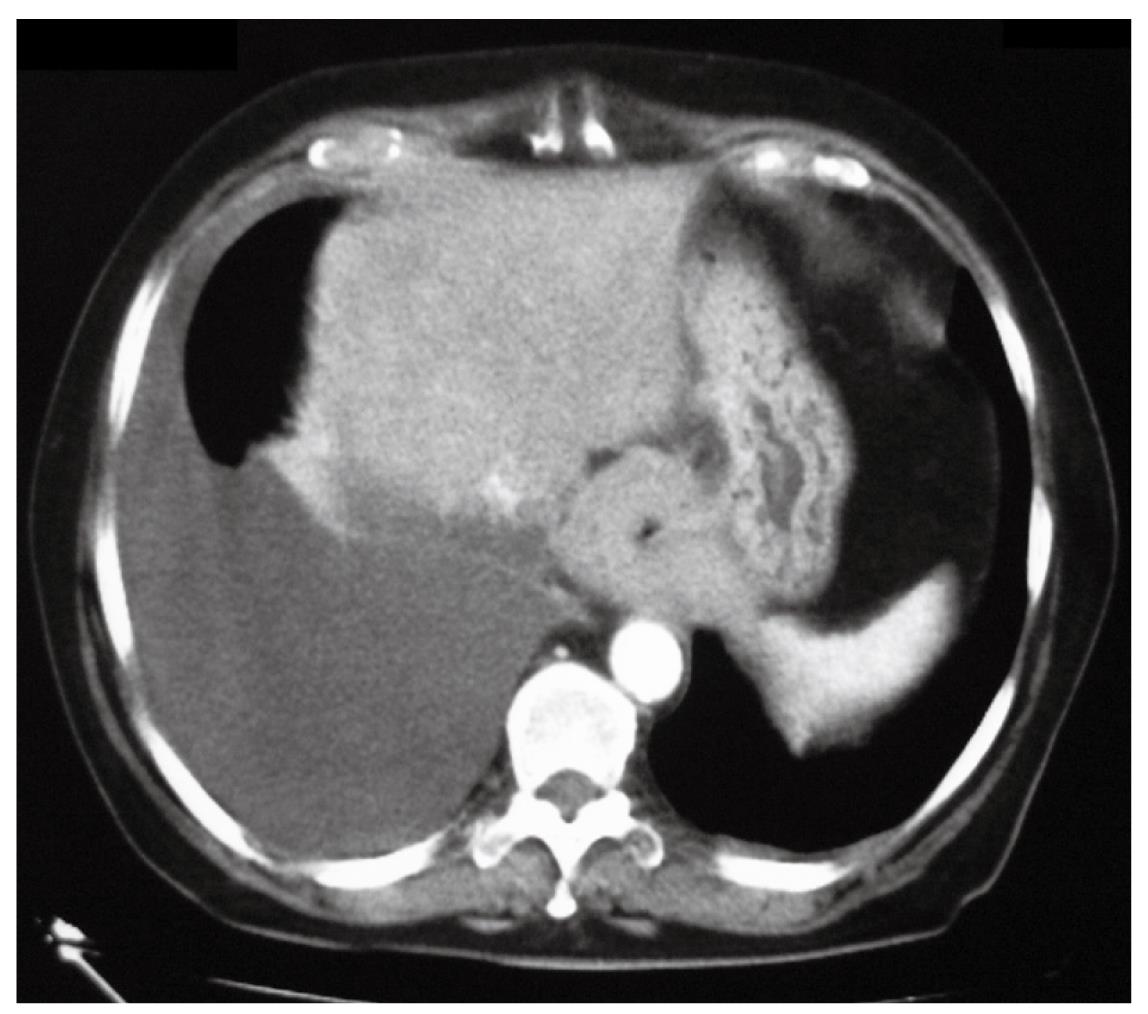 Multiple biopsies from the esophageal muscle wall and from the contiguous diaphragm were taken. Histopathological findings from the esophageal wall were consistent with the diagnosis of pleural mesothelioma (epithelioid type). Immunohistochemistry was positive for calretinin, vimentin, Ckpan and CK 7 (Figure 4). Soon after surgery the patient complained of recurrent dysphagia and onset of pain in the right side of the chest. 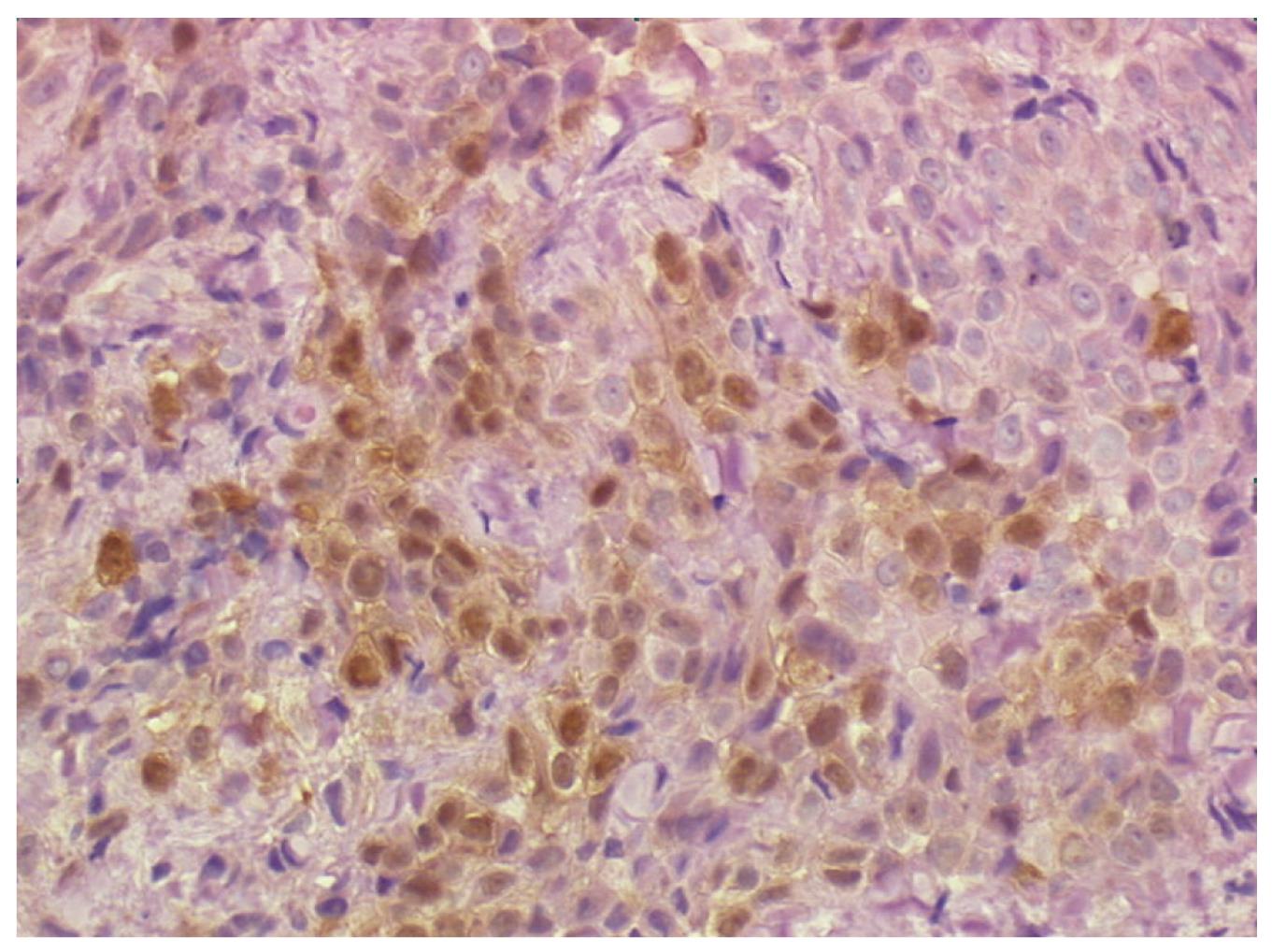 Two weeks later, a right thoracoscopy in the prone position with single-lumen intubation was performed to complete the staging of the disease and to provide drainage of the recurrent pleural effusion. Multiple nodularities and plaques were noted along the diaphragmatic, parietal and mediastinal pleura surfaces, mostly in the lower half of the pleural cavity. Multiple biopsies were repeated, which confirmed the previous histopathological diagnosis. During the same operative session, a porth-a-cath was inserted in the right subclavian vein, and a 10 cm self-expanding esophageal metal stent with antireflux valve (Hanarostent®) was deployed endoscopically. A gastrographin swallow study performed the next day showed a partial stent expansion that required a single endoscopic balloon dilation within the stent. As a result of this treatment, there was a marked improvement of dysphagia but worsening of the chest pain, requiring sustained analgesia. The patient was also started on a chemotherapy regimen. She died from septic shock four months after the diagnosis without stent related complications.

Malignant pseudoachalasia is a term used to describe the clinical picture of gastroesophageal junction obstruction associated to an occult submucosal tumor or a non-contiguous tumor. Several mechanisms have been proposed to explain the pathogenesis of this type of secondary achalasia. First, the tumor might directly infiltrate the nerves within the myenteric plexus of the esophagus. Second, a paraneoplastic syndrome might affect the function of the distal esophagus[13]. Third, the tumor might replace the smooth muscle at the esophagogastric junction, reducing compliance of the esophageal wall to distension. In turn, the esophagus might generate high pressures to overcome this obstruction with dilatation as a compensatory response.

Pleural mesothelioma is a rare cause of malignant pseudoachalasia, accounting for 7.5% of all diagnoses[3]. Goldschmiedt et al[18] reported of a 64-year-old male presenting with progressive dysphagia and radiological and manometric findings suggestive of achalasia. Thoracentesis and pleural biopsy were performed for a left pleural effusion and no malignant cells were found. The CT scan was negative. At left thoracotomy, multiple pleural plaques covered the diaphragmatic surfaces, as well as the pleura reflection over the lung. A distal esophageal myotomy was carried out and revealed an abnormal tissue consistency at the level of the esophagogastric junction. Biopsy and immunohistochemical studies showed a malignant epithelial mesothelioma.

The preoperative diagnosis of pseudoachalasia secondary to pleural mesothelioma is problematic. A CT scan is often inaccurate in diagnosing the extension of the disease through the diaphragm[19]. Thoracentesis is usually the initial diagnostic procedure because most patients present with a pleural effusion. However, pleural fluid cytology is positive for malignancy in less than 50% of patients. Percutaneous pleural biopsy is also unreliable because the small specimens obtained do not allow immunohistochemical studies to differentiate the disease from metastatic adenocarcinoma[20]. There is only one case report showing the efficacy of EUS-guided fine-needle aspiration to diagnose pleural malignant mesothelioma in a patient with CT and endosonographic evidence of a paraesophageal mass[21]. Video-assisted thoracoscopy is considered the diagnostic procedure of choice because it consistently yields a diagnosis without committing the patient to a major surgical procedure through a formal thoracotomy[22]. In our patient, laparoscopy was safe and effective in providing the correct diagnosis. To our knowledge, this is the first reported case of pleural mesothelioma diagnosed through laparoscopy.