AIM: To determine cytomegalovirus (CMV) frequency in neonatal intrahepatic cholestasis by serology, histological revision (searching for cytomegalic cells), immunohistochemistry, and polymerase chain reaction (PCR), and to verify the relationships among these methods.

METHODS: The study comprised 101 non-consecutive infants submitted for hepatic biopsy between March 1982 and December 2005. Serological results were obtained from the patient’s files and the other methods were performed on paraffin-embedded liver samples from hepatic biopsies. The following statistical measures were calculated: frequency, sensibility, specific positive predictive value, negative predictive value, and accuracy.

CONCLUSION: The frequency of positive CMV varied among the tests. Serology presented the highest positive frequency. When compared to PCR, the sensitivity and positive predictive value of serology were low.

The frequency of cholestatic jaundice is difficult to determine, varying between 1:2500 and 1:5000 newborns[1–3]. The initial objective in the management of neonatal cholestatic jaundice is to distinguish between intrahepatic and extrahepatic causes, as the latter requires urgent surgical intervention[4]. Neonatal intrahepatic cholestasis (NIHC) represents 2/3 of the cases of neonatal cholestasis[5–9]. The most common causes of the disease are infection, including cytomegalovirus (CMV)[10–12]. Data on the prevalence of CMV in NIHC vary greatly depending on the diagnostic method used (5%-46%)[212–14]. Congenital CMV infection is assessed by viral isolation detected within 2-3 wk after birth[15]. If CMV is detected three weeks after birth, diagnosis of congenital infection should be supported by clinical and epidemiologic features[121416]. Congenital disease might occur due to maternal primary infection (where the vertical transmission rate ranges from 40%-50%), or as a recurrence (where the vertical transmission rate ranges from 0.5%-2%). The clinical manifestations are essentially limited to neonates of mothers presenting with a primary infection during pregnancy and include: purpura, intracerebral calcifications, retinitis, ventriculitis, hepatosplenomegaly, microcephaly, intrauterine growth retardation, and jaundice[1517–22]. The general prevalence of congenital CMV infection in Brazil is similar to that reported in studies on highly immune populations[1623–27]. There is a higher rate of congenital infection, but fewer clinical manifestations[2829].

The purpose of the present study was to establish the frequency of CMV infection in patients with NIHC based on serology (IgM-ELISA), histological revision (searching for cytomegalic cells), immunohistochemistry (IHC), and polymerase chain reaction (PCR) and to verify the relationships among these methods.

Data from NIHC patients were evaluated at two tertiary centers between March 1982 and December 2005: the Pediatric Department of the State University of Campinas (Unicamp) Teaching Hospital and at the Children’s Institute of the Medical School of the University of São Paulo (USP). A uniform diagnostic approach was followed throughout the observation period.

Cholestasis was defined by laboratory criteria as suggested by Moyer et al[4]. Inclusion criteria were: jaundice appearing up to three months of age and hepatic biopsy performed during the investigation.

Histological revision was carried out by one hepatopathologist (CAFE). When necessary, new slides were created and examined. Among the 84 liver biopsies, five were surgical and 79 were percutaneous. The presence of at least one cytomegalic cell was considered suggestive of CMV.

Four-&mgrm-thick histological sections of the liver biopsies were placed on silanized slides, deparaffinized in xylene, and rehydrated. For antigen retrieval, the slides were immersed in 10 mmol/L citrate buffer (pH 6.0) in a steamer at 90°C for 30 min. A commercially available cocktail of two mouse monoclonal antibodies to CMV was applied to the sections (clones DDG9/CCH2 [prediluted]; Cell Marque, Hot Springs, AR, USA) for 1 h at 37°C and subsequently overnight (18 h) at 4°C. The reaction was amplified using the peroxidase-conjugated Novolink polymer (Novocastra, Newcastle, UK). Staining was achieved using 3,3-diaminobenzidine tetrahydrochloride (Sigma, St. Louis, MO, USA) and counterstaining with Mayer’s hematoxylin. All reactions were performed with appropriate positive and negative controls. The positive control corresponded to a lung fragment from a patient who had died due to a generalized CMV infection. The negative control corresponded to the same specimen, in which a specific anti-CMV antibody was replaced by saline buffer. Positive results consisting of brown-colored nuclei were evaluated using a conventional optical microscope.

The recommendations of Kwok and Higuchi[30] were followed to prevent sample contamination.

The human β-globin gene was amplified as an internal control for the reaction[32]. Primers for detection of the β-globin gene were as follows: PCO3 (5' CTTCTGACACAACTGTGTTCACTAGC 3') and PCO4 (5' TCACCACCAACTTCATCCACGTTCACC 3').

Both β-globin and nested PCR products were visualized on ethidium bromide-stained, 2% agarose gels, after electrophoresis.

The present research study was approved by the Medical Research Ethics Committees of both institutions. Informed consent was not needed, because serologies and liver biopsies had been done during the investigation process.

The etiologies of NIHC are presented in Table 1. Most of them had an idiopathic etiology (58%). Five patients were previously diagnosed with CMV infection based on serology, PCR (plasma) and antigenemia.

This was a retrospective study and there was a paucity of liver biopsy fragments (most of the biopsies were obtained percutaneously); therefore, it was not possible to perform all four tests in all patients. In 17 patients, histological revision was not done because a shortage of paraffinized sample material did not permit making new slides. In the remaining 84 cases, the pathologist did not observe the presence of cytomegalic cells. Only one of 44 patients had positive IHC, 6/77 had positive PCR and 7/64 were IgM-ELISA positive. Table 2 shows the results of IgM-ELISA, histological revision, IHC, and PCR and the number of patients submitted to each diagnostic method.

Table 3 presents the clinical and laboratory data of PCR-positive patients. Five of six patients birth weights > 2500 g. Two of them had positive IgM-ELISA: one had a previous diagnosis of cystic fibrosis and the other had Byler’s Disease. Figure 1 shows the immunostaining of the liver in a positive case, consisting of brown colored nuclei, and Figure 2 exemplifies the PCR for CMV. 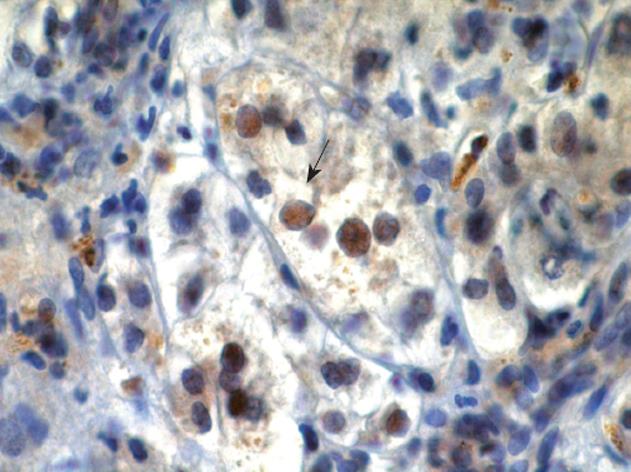 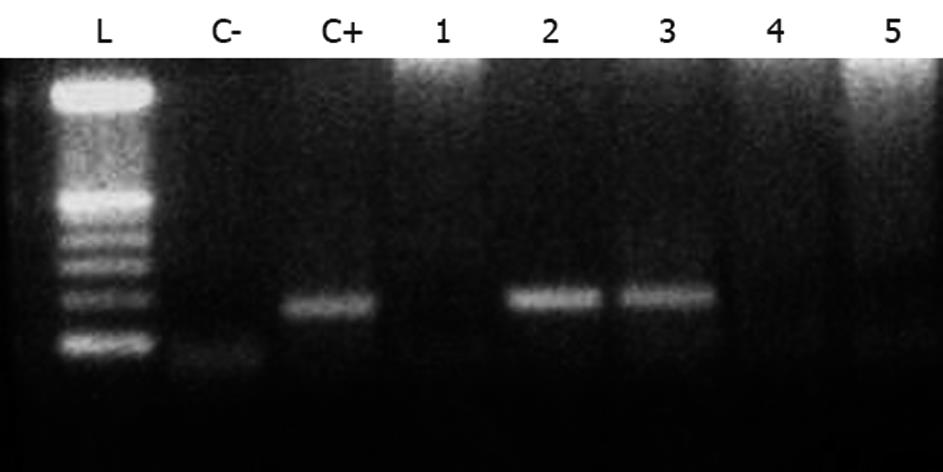 The ubiquitous nature of CMV makes for difficulties in establishing direct evidence of the actual role of CMV in neonatal cholestasis, as stated in the editorial of Persing and Rakela[34]: “When does the detection of an infectious agent become unequivocally the etiologic agent of a specific condition?” Detection of the virus from the liver provides strong evidence that neonatal cholestasis is caused by CMV infection[15].

Histological searching for cytomegalic cells was negative in 84 patients. Lurie et al[35], after studying four fatal cases of NIHC from CMV, described the presence of cytomegalic cells in the liver from two of them. None were detected in the present study or observed in cases of extrahepatic cholestasis (EHC)[36–38]. In CMV hepatitis following orthotopic liver transplantation (immunosuppressed patients), demonstration of cytomegalic inclusion bodies in hematoxylin and eosin sections is sufficient for a diagnosis of CMV hepatitis[39].

Only one patient had positive immunostaining and a positive PCR, despite encouraging data in immunosuppressed patients[4041]. There are no reports in the medical literature in which the IHC method has been used to identify CMV in NIHC.

In the literature, the frequency of positive CMV in NIHC by PCR techniques varies between 5% and 46%[144243]. Different techniques and samples make it difficult to establish a correlation between the data. In the present study, PCR was positive in 8% of the patients (6/77). Three patients had been previously diagnosed with other defined etiologies, indicating that concomitant infection by CMV and other agents is possible. This finding suggests that multiple agents must be investigated in the search for a diagnosis of NIHC. Four of these six cases presented with a negative IgM-ELISA, probably due to immaturity of the neonatal immune system[1744].

Few studies have been carried out comparing the different diagnostic methods of CMV infection in neonatal cholestasis. Fischler et al[45] found positive serology for IgM-CMV in 32% of cases tested. In another study[6], the same author found IgM-CMV and/or the presence of positive CMV in the urinary samples of 19/54 (35%) patients with NIHC and positive results in 4/11 carriers of α-1-antitrypsin deficiency. A retrospective analysis of 39 patients (who presented with CMV in blood or urine cultures, or positive PCR in liver biopsies collected between 30 and 220 d of life) showed the presence of CMV by PCR-CMV on filter papers collected during the first three days of life in two neonates, suggesting that congenital infection was not the cause of cholestasis[42].

Shibata et al[43] evaluated 26 non-cholestatic infants (1-24 mo old), who presented with an increase in ALT, through a quantitative PCR technique on their plasma. CMV was positive in four patients (15.4%). Three patients who presented with positive IgM-CMV did not have a positive PCR.

These studies were conducted in areas that were considered to have a low prevalence of CMV[1546]. In Brazil, infection due to CMV is highly prevalent in the population and occurs early in the first year of life[252627]. In populations where the majority of women of reproductive age have antibodies against CMV, there is a higher rate of congenital infection (as compared to populations with a low prevalence of antibodies against CMV), but without clinical disease. Although the presence of maternal antibodies does not prevent CMV transmission, it appears to confer protection or may be a marker of another factor that protects the child[2829].

In conclusion, the frequencies of positive results for CMV varied from 0 (searching for cytomegalic cells) to 11% (IgM-ELISA). Disparities in serology and PCR were observed in the present study, as well as in other studies using different PCR techniques. Although our data are not encouraging, it will be necessary to conduct new studies to establish the role of IHC in the diagnosis of CMV in neonatal cholestasis. Even if there was a previous diagnosis, the involvement of CMV should be determined. All results should be interpreted considering the sum of clinical and epidemiologic features.

The ubiquitous nature of cytomegalovirus (CMV) makes for difficulties in establishing direct evidence of the actual role of CMV in neonatal cholestasis. The aim of this study was to determine the CMV frequency in neonatal cholestasis and to compare results of different diagnostic tests: serology, histology, immunohistochemistry, and polymerase chain reaction.

CMV is one of the most common causes of neonatal intrahepatic cholestasis, but the CMV best diagnostic criteria are not yet established because the positivity of different diagnostic tests varies considerably.

In the present study, compared to polymerase chain reaction (PCR), the sensitivity and positive predictive value of IgM-ELISA serology were low, whereas specificity, negative predictive value and accuracy were high. Only one patient had positive immunostaining and a positive PCR. There are no previous reports in the medical literature on the use of immunohistochemistry to identify CMV in neonatal hepatitis.

Even if there was a previous diagnosis, the involvement of CMV should be determined. It will be helpful to establish the role of CMV in neonatal cholestasis.

Serology, histology, immunohistochemistry, and polymerase chain reaction could be used in the differential diagnosis of CMV in neonatal cholestasis; however, the results should be interpreted considering the sum of clinical and epidemiologic features.

The study by Bellomo-Brandao et al investigated the relationship between the infection with cytomegalovirus and the appearance of neonatal intrahepatic cholestasis. The aims of this study are very appealing. The study is well designed and the methods appropriate.