Anorectal complaints are very common and are caused by a variety of mostly benign anorectal disorders. Many anorectal conditions may be successfully treated by primary care physicians in the outpatient setting, but patients tend not to seek medical attention due to embarrassment or fear of cancer. As a result, patients frequently present with advanced disease after experiencing significant decreases in quality of life. A number of patients with anorectal complaints are referred to gastroenterologists. However, gastroenterologists’ knowledge and experience in approaching these conditions may not be sufficient. This article can serve as a guide to gastroenterologists to recognize, evaluate, and manage medically or non-surgically common benign anorectal disorders, and to identify when surgical referrals are most prudent. A review of the current literature is performed to evaluate comprehensive clinical pearls and management guidelines for each topic. Topics reviewed include hemorrhoids, anal fissures, anorectal fistulas and abscesses, and pruritus ani.

Anorectal complaints are very common and are mostly caused by benign anorectal disorders. Although many anorectal conditions are successfully treated by gastroenterologists in the outpatient setting, knowledgeable and skilled colorectal surgical interventions may be required. This article can serve as a guide to gastroenterologists in recognizing, evaluating, and managing common benign anorectal disorders, as well as identifying when surgical referrals are most prudent.

Because hemorrhoids are a normal part of anorectal anatomy, treatment is only indicated if they become symptomatic. However, in the general management of hemorrhoids, colorectal surgeons agree that all painful thrombosed hemorrhoids (Figure 1) should be excised. Some patients present at a time after thrombosis when symptoms have actually begun to subside. Excision is not mandatory in these cases, especially in the absence of erosion or significant tenderness to touch. Initial medical management is recommended for all but the most advanced cases. As a conservative treatment, the almost-universal recommendations are to add dietary fiber[9], avoid straining during defecation, and to utilize sitz baths two to four times a day[10]. Although the available evidence to support the benefits of high fiber intake to manage and prevent hemorrhoids is limited, the use of high fiber is commonly recommended in clinical practice. Since fiber consumption can induce problems with abdominal bloating and pain, patients should start at a low dose of the fiber supplement and slowly increase the amount until reaching at least 20-30 g/d. Patients should be educated to drink plenty of water with fiber. Over-the-counter topical agents and suppositories have been used as the empirical treatment and can reduce some hemorrhoidal symptoms, but data supporting their effectiveness are lacking. Hemorrhoids that fail to respond to medical management may be treated with rubber band ligation, sclerosis, and thermotherapy by using infrared beam, electric current, CO2 laser, or ultrasonic energy. These local techniques induce scarring and fixation of the hemorrhoids to the underlying tissues. These procedures are usually performed in the office setting, do not require anesthesia, and are mostly applied for second degree and some third-degree prolapsed hemorrhoids. Infrared photocoagulation works well on small bleeding hemorrhoids, but is less effective on large or bulky hemorrhoids. Infrared radiation, generated by a tungsten-halogen lamp, creates heat and thus leads to inflammation and later scarring of the tissue. Most authors report only infrequent complications to infrared treatments. Rubber band ligation has been demonstrated to be the most effective method to treat symptomatic internal hemorrhoids that have failed to respond to conservative management[11–14]. Controversy exists as to how many hemorrhoidal bundles can be effectively and safely banded at one time[15]. Complications associated with this procedure are not frequent (< 2%) and include vasovagal response, anal pain, bleeding from early dislodgment, and pelvic sepsis[1617]. Operative hemorrhoidectomy is reserved for the large third- and fourth-degree hemorrhoids, mixed hemorrhoids with a prominent external component, and incarcerated internal hemorrhoids requiring urgent intervention. The hemorrhoidal tissue is excised, and the mucosal and skin defect may be left open as an open hemorrhoidectomy, may be partially closed, or may be closed with a running suture. Several randomized trials have compared different types of hemorrhoidectomies with a variety of open[18–20] and closed techniques with inconsistent results[2021]. Similarly, a variety of techniques have been introduced to reduce postoperative pain. The stapled hemorrhoidopexy, also called Procedure for Prolapse and Hemorrhoids (PPH, Figure 2), is a technique that reduces the prolapse of hemorrhoidal tissue by using an intraluminal circular stapling device to remove a ring of redundant mucosa and submucosa from the upper anal canal, thereby reducing the prolapsing hemorrhoidal tissue back into the anal canal and fixing it into position. The hemorrhoidal inflow that transverses the excised segment is also interrupted, thus decreasing vascularity. Compared to conventional hemorrhoidectomy, PPH affects few nerve endings, which results in less post-operative pain. The ultrasonic scalpel hemorrhoidectomy and the bipolar sealing and cutting device have also been reported to produce less postoperative pain than conventional excisional hemorrhoidectomy[18192223]. However, long-term efficacy needs to be determined[2124]. 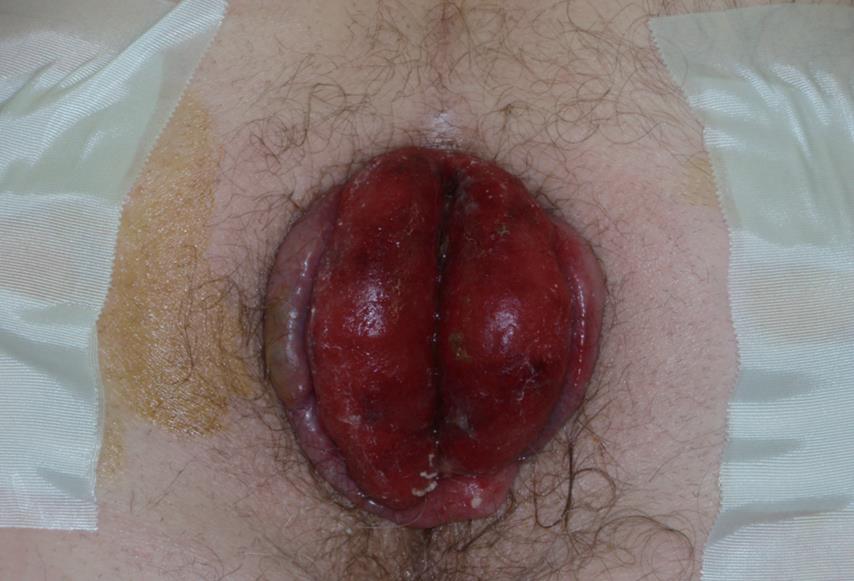 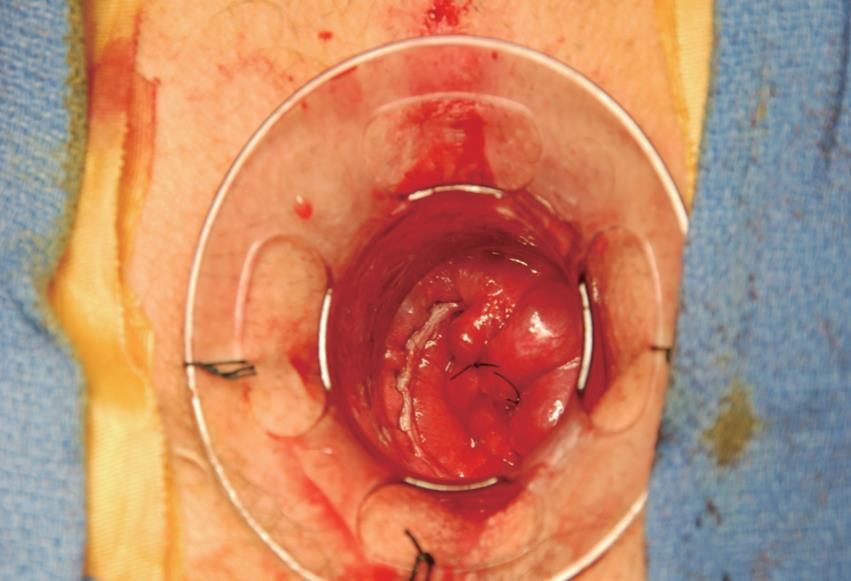 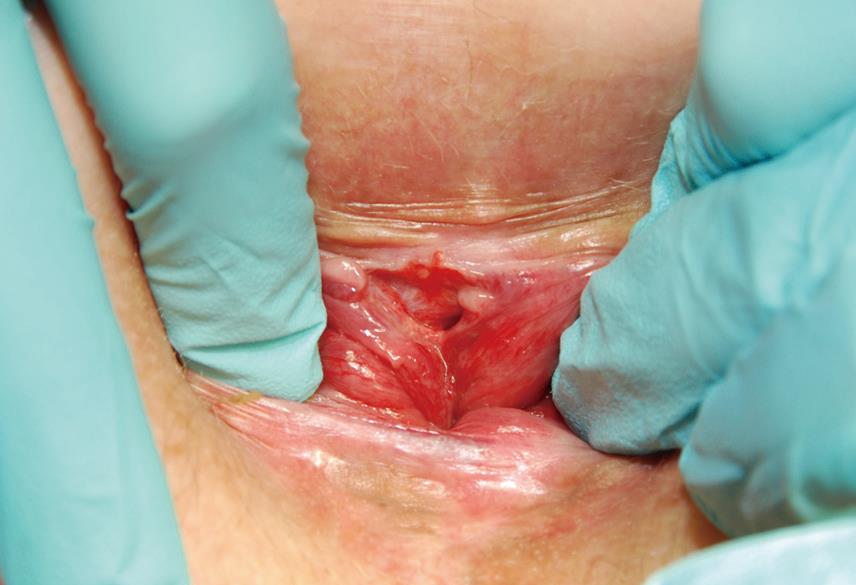 The patient may complain of drainage, bleeding, pain with defecation or sexual activity, swelling, or diarrhea. Fistulas may be related to other diseases such as Crohn’s disease, proctitis, or anorectal cancer. 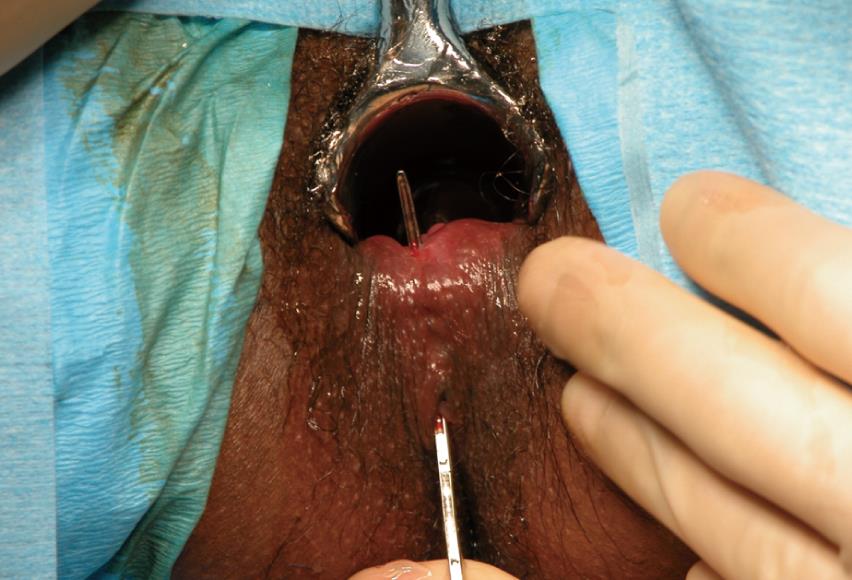 Pruritus ani is a symptom complex, not a disease. It is a common but socially embarrassing condition. The word “pruritus” originated from the Latin word prurire, which means “to itch,” and refers to an unpleasant cutaneous sensation. Thus, patients develop a nearly uncontrollable desire to scratch[83]. Excessive rubbing or scratching of the skin results in maceration, superinfection, and a decrease in thickness of the fatty skin layer, which exacerbates the problem and leads to hypertrophy of the epidermis and lichenification. Pruritus ani affects 1%-5% of the adult population[83], not uncommonly occurs in adolescents and the elderly, and is more prevalent in men than women[84].

Pruritus ani is classified when it has an identifiable etiology that may include numerous anorectal diseases, other systemic diseases, transient internal sphincter relaxation, an exaggerated rectoanal inhibitory reflex, poor hygiene, overaggressive cleansing, and local irritants (Table 1)[85–90]. However, in more than one half of patients with pruritus ani the cause is categorized as idiopathic.

A variety of possible etiologic factors challenge the physician to approach the correct diagnosis and institute the appropriate management. A detailed history and close physical examination can often help in the identification of pruritus. Inspection, palpation, and anoscopic examination should be performed on the initial visit. Scrapings to exclude fungal and yeast infection may be helpful. Perianal skin biopsy may be useful in suspicious skin lesions or severe cases. Some publications recommend sigmoidoscopy or colonoscopy to evaluate inflammatory bowel disease and colorectal neoplasms[88].

Management is nonsurgical, thus should be aimed at the underlying cause; there is very rarely any reason for surgical referral. Appropriate follow-up care is necessary for therapeutic success. The goal to achieve success with patients who have no identifiable etiology is to maintain the perianal skin clean, dry, and slightly acidic. However, aggressive cleaning of the perianal area with alkaline soaps leads to chronic pruritus[88]. The vast majority of patients with pruritus ani can be treated by conservative management[8991]. Instructions for patients, well described by Hicks and colleagues (Table 2)[88], are removal of irritants, improving perianal hygiene[92], avoiding scratching, wearing loose cotton underwear, adjusting the diet by adding a bulking agent to induce soft and non-irritating stools, and discontinuing offending agents, such as coffee, tea, cola, beer, chocolate, and tomatoes[88]. Hydrocortisone ointment 0.5 to 1.0% can provide symptomatic relief of idiopathic pruritus ani, but should not be used for prolonged periods of time because of dermal atrophy. Skin barriers such as topical zinc oxide, can also provide some relief. Nighttime sedating antihistamines or tricyclic antidepressants may be helpful. Refractory patients with intractable symptoms should be referred to a dermatologist[91]. Various therapies have been used with inconsistent results or insufficient data to judge efficacy, such as injection of methylene blue, surgical debridement, radiation therapy, ultraviolet phototherapy, cryotherapy, and intralesional corticosteroids[93–96].

Although most anorectal conditions are benign, knowledgeable and skilled physician intervention is often required. Understanding the pathophysiology of anorectal disease guides treatment selection. Initiating early appropriate treatments should lead to prompt symptomatic resolution in a cost-effective manner. A subgroup of patients who persistently present with symptoms despite applicable conservative or non-surgical management should be referred to a colorectal surgeon.