RESULTS: The FISH analysis of fecal samples revealed a 2-fold decrease in the level of bifidobacteria (4.2 ± 1.3 vs 8.3 ± 1.9, P < 0.01) in IBS patients compared to healthy subjects, whereas no major differences in other bacterial groups were observed. At the species level, Bifidobacterium catenulatum levels were significantly lower (6 ± 0.6 vs 19 ± 2.5, P < 0.001) in the IBS patients in both fecal and duodenal brush samples than in healthy subjects.

Irritable bowel syndrome (IBS) is a common gastrointestinal disorder characterized by abdominal pain or discomfort and altered bowel function. Alterations in psychosomatic factors, gastrointestinal motility, visceral hypersensitivity and microbiotic composition have been suggested to play a role in the pathophysiology of IBS[1]. Alterations in fecal and small intestinal microbiotic composition in IBS patients have been reported and studies revealed a somewhat higher bacterial count in jejunal juice of IBS patients and lower numbers of fecal coliforms, lactobacilli and bifidobacteria than in healthy subjects[23]. More specifically, molecular-based methods showed that in IBS patients levels of members of the Clostridium coccoides subgroup, Lactobacillus, Collinsella and Bifidobacterium catenulatum groups are different from that of healthy subjects[45]. These differences in the fecal microbiotic composition may underlie symptom generation by promoting abnormal colonic fermentation[6]. However, mucosa-associated bacteria might be more relevant in the symptom generation of IBS, since fecal and jejunal juice samples are only representing the composition of luminal microbiota. Alterations in luminal bacteria composition may change the commensal microbiota and affect the microbiota adhering to the mucosa. Microorganisms adhering to the intestinal wall are more likely to affect the host’s immune, physiological or neuronal system or vice versa. The composition of luminal and mucosa-associated bacteria are not the same since the micro-environments are different at the surface of the intestinal epithelium and the lumen[78]. Therefore, we aimed to determine the composition of fecal luminal and mucosa-associated microbiota in IBS patients using molecular identification and quantification techniques.

To obtain small intestinal mucosa-associated material a sterile cytology brush (Uno-Brush, Prince Médical, Ercuis, France) sheathed in a sterile catheter was placed through the endoscope biopsy channel and advanced under direct vision out beyond the endoscope tip[10]. The duodenal mucosa was brushed three times and then pulled back into the sheath of the catheter. The catheter was removed and the brush was immediately cut off the catheter and placed into a sterile tube in liquid nitrogen and stored at -80°C until analysis. Fecal samples, obtained before endoscopy, were collected and stored at -80°C until further handling.

The total number of bacteria present in the fecal samples was determined with the EUB 338 probe which targets all bacteria[11]. FISH analysis was essentially performed as described previously with the genus-specific probes listed in Table 1[12]. Approximately 0.5 g of homogenized feces was suspended in 4 mL of 0.2 mm-pore-size-filtered PBS and 0.5 mL 37% formaldehyde and thoroughly mixed by vortexing for 3 min. After incubation for 4 h at 4°C the suspension was vortexed again for 2 min. Debris was removed by a short spin at 80 g for 1 min. In an eppendorf tube, 300 &mgrL of the supernatant was collected and the fixed cells were washed twice with PBS. For FISH analysis of the Lactobacillus-Enterococcus group the cells were first permeabilized by resuspending the pellet in 100 &mgrL Proteinase-K solution (180 kU/L) (Sigma-Aldrich, Zwijndrecht, The Netherlands) and incubated for 10 min at 37°C. The cells were washed as described above and resuspended in 300 &mgrL PBS/ethanol (1:1 v/v). After one hour of storage at -20°C, the cell suspension was diluted 1:10 in hybridization buffer at the required temperature for hybridization, and 5 ng labeled probe was added. Cells were hybridized for 16 h at the prescribed hybridization temperature. After resuspension in 4 mL washing buffer, cells were filtered on a 0.2 mm pore size Isopore polycarbonate membrane filter (Millipore Corporation) and washed with 5 mL of 50°C washing buffer. Filters were mounted on microscope slides with Vectashield (Vector Laboratories, Burlingame, CA, USA), and hybridized cells were counted visually using an Olympus BX60 epifluorescence microscope using a FITC or Cy3-specific filter. All microscopic counts were determined in duplicate, with a minimum of 300 cells counted per assay.

Brush and fecal samples were thawed on ice cooled water. DNA was extracted using the DNeasy Tissue kit (Qiagen, Venlo, The Netherlands) or the Fast DNA Spin kit (Qbiogene, Irvine, USA) from the brush and fecal samples respectively. The eluted DNA samples were stored at -20°C. The integrity of the isolated DNA was determined visually after electrophoresis on a 1.0% agarose gel containing ethidium bromide. 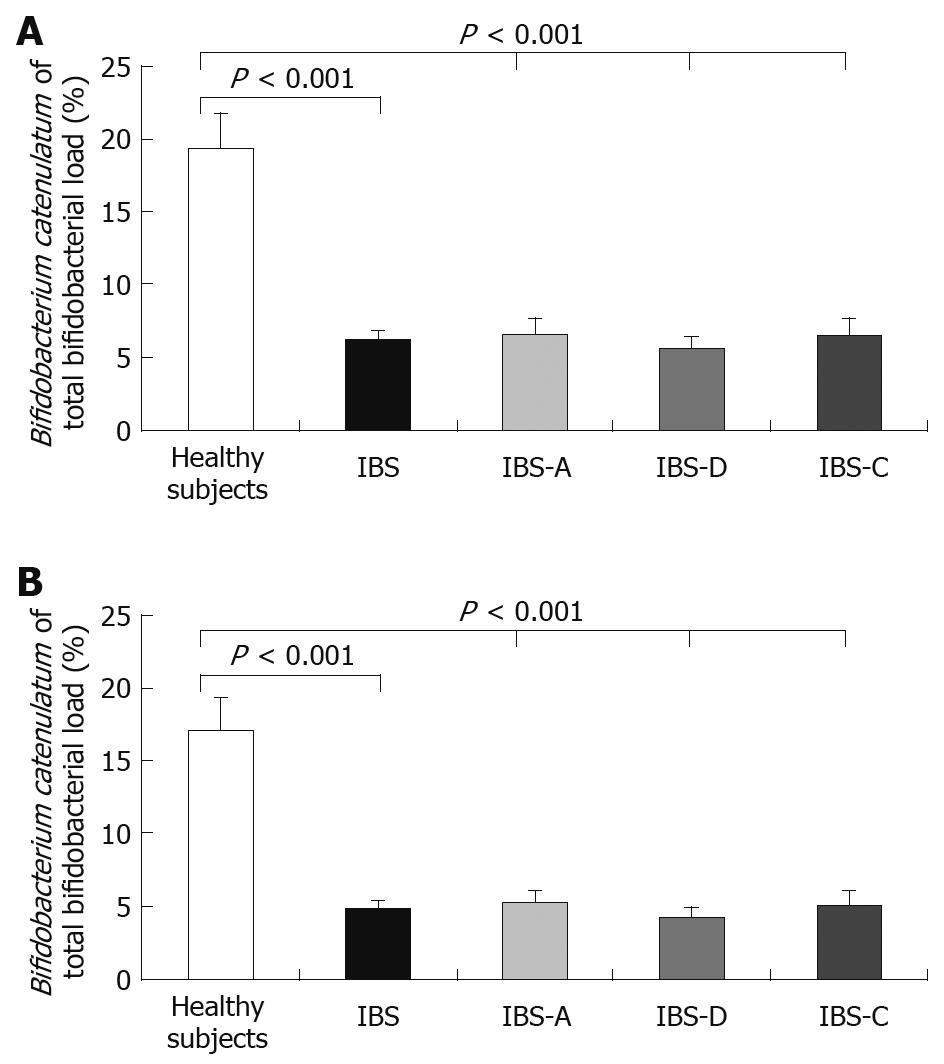 Characterization of B. catenulatum in age-matched IBS patients and healthy subjects

Composition of gastrointestinal microbiota is known to be relatively stable and composed of permanent, the so-called core phyla, and transient species which contribute to gastrointestinal health and disease[17–19]. The presence of beneficial microbes in the intestine prevents colonization by potentially pathogenic microbes, referred to as colonization resistance[2021]. Imbalances in the microbiota are characterized by a decrease in beneficial anaerobic bacteria and increases in aerobic bacteria, fungi and harmful anaerobic bacteria[20].

In this study, we showed, using FISH analysis, that IBS patients have significantly lower fecal levels of bifidobacteria but no differences in the other major bacterial groups. Previous studies have also shown microbial alterations in fecal samples of IBS patients using both culturing and molecular-based techniques[24]. Using culturing techniques, Balsari et al[2] have already shown in 1982 a decrease in bifidobacteria, coliforms and lactobacilli in IBS patients. Using molecular-based techniques decreased B. catenulatum, C. coccoides, Lactobacillus and Collinsella counts in the fecal samples of IBS patients were found[45]. These studies were limited to the fecal flora. We broadened the study by examining bifidobacteria levels in duodenal mucosa-associated samples.

Differences in microbiotic composition between luminal and mucosa-associated bacteria have been shown[722–25]. The different micro-environment of the epithelium compared to the lumen might lead to a different microbiotic composition[726]. Bacteria that attach to the mucosa may exert greater influence on innate immune processes in the intestine[2427]. In addition, the adhesion of non-pathogenic bacteria to the epithelial surface may contribute to the barrier that effects host resistance to pathogenic bacteria[24].

In this study, we showed that the percentages of B. bifidum of the total bifidobacterial counts were lower in the fecal samples than in the duodenal mucosa-associated samples in both IBS patients and controls. This might be due to high hydrophobicity of B. bifidum which is related to its ability to adhere to surfaces[2829]. Furthermore, B. catenulatum counts were decreased in duodenal mucosa-associated samples as well as in fecal samples of IBS patients compared to controls. The effect of B. catenulatum on the health of the host is unknown. However as a group, bifidobacteria are considered beneficial for the host, as they produce lactic and acetic acids that decrease pH and inhibit the growth of potential pathogenic bacteria[30–32].

Moreover, Bifidobacterium spp prevent diarrhea and intestinal infections, alleviate constipation and stimulate the immune system[31]. The lower levels of bifidobacteria might be epiphenomenal or develop as a consequence of altered gastrointestinal motility or genetic makeup of IBS patients rather than being the cause of IBS symptoms[31].

An imbalanced microbiotic composition may lead to a different fermentation pattern, especially with an increased hydrogen production resulting in bloating[635]. Both antibiotics and probiotics have been shown to reduce IBS symptoms, which further suggests that microbial imbalance may underlie symptom generation in IBS patients[36–40]. Previously, a therapeutic trial suggested that particular B. infantis species were efficacious in the treatment of IBS symptoms[41]. No effects of B. infantis on stool consistency or frequency could be observed which implies that this therapeutic approach may be applicable to all IBS patients irrespective of their stool pattern[41]. B. breve in combination with L. plantarum has been shown to decrease pain and the severity of symptoms in IBS patients[42]. Prebiotics, oligofructose and inulin might reduce symptoms in IBS-C patients as they selectively stimulate bifidobacteria which results in increased stool frequency[43].

In conclusion, lower bifidobacteria levels were found both in duodenal mucosa-associated samples as well as in fecal samples of IBS patients when compared to healthy subjects. Specifically, B. catenulatum was found to be reduced in duodenal mucosa-associated bacteria as well as in the feces of IBS patients. The relevance of specific Bifidobacterium spp in relation to IBS symptoms is unknown; however modulation of the gut microbiota by means of prebiotics or bifidobacteria-containing probiotics to restore a balanced microbiotic composition may have a therapeutic role.

Alterations in fecal and small intestinal microbiotic composition in irritable bowel syndrome (IBS) patients have been reported and studies revealed a somewhat higher bacterial count in jejunal juice of IBS patients and lower numbers of fecal coliforms, lactobacilli and bifidobacteria than in healthy subjects.

The aim of the study was to determine the composition of both fecal and duodenal mucosa-associated microbiota in IBS patients and healthy subjects using molecular-based techniques.

Decreased bifidobacteria levels in both fecal and duodenal brush samples of IBS patients compared to healthy subjects indicate a role for microbiotic composition in IBS pathophysiology.

The authors investigated the fecal and duodenal mucosal-associated microbiota in patients with IBS. This topic is of interest since, as the authors mentioned, alterations in intestinal flora have been suggested as a potential etiological factor in the pathogenesis of this disorder.