Extramedullary plasmacytoma (EMP), accounting for approximately 3% of all plasma cell neoplasms, results from uncontrolled plasma cell proliferation and consists of monoclonal plasmacytic infiltration without bone marrow involvement[1]. Approximately 80%-90% of EMPs involve mucosa-associated lymphoid tissue of the upper airway and 75% of them involve the nasal and paranasal regions, while retroperitoneal infiltration is very rare[2]. We report a 26-year-old man with a solitary EMP in the retroperitoneum.

A 26-year-old man was referred to our hospital with a history of abdominal distention and effort intolerance persisting for the previous 2 mo. He had no history of fever, weight loss, bladder or bowel dysfunction, and back pain. Physical examination revealed an irregular, firm, non-tender mass occupying almost the whole abdomen. He had no icterus or lymphadenopathy with normal tests. An abdominal computed tomography (CT) scanning showed a large heterogeneous mass in the right retroperitoneal region, surrounding the posterior portion of the right kidney and compressing the right kidney (Figure 1A). The tumor tissue was slightly enhanced after injection of a contrast medium (Figure 1B). 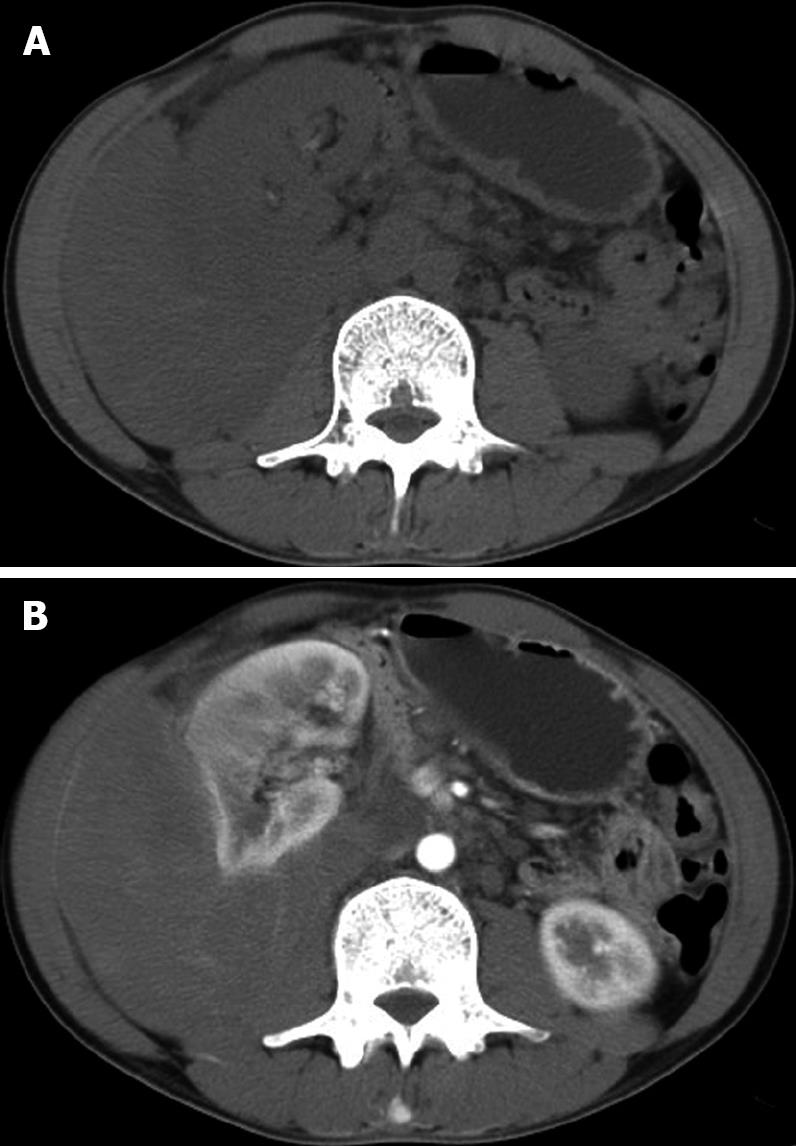 Figure 1 Abdominal computed tomography showing a large heterogeneous mass in the right retroperitoneal region, surrounding the posterior portion of the right kidney and compressing the right kidney (A), and slightly enhanced tumor tissue after injection of a contrast medium (B).

Fine needle aspiration cytology of the mass was not done because of refusal of his parents who were afraid of needle track implantation. Thereafter, an extensive resection of the tumor including extirpation of the right kidney, and part of the liver was performed. Postoperative recovery was uneventful. 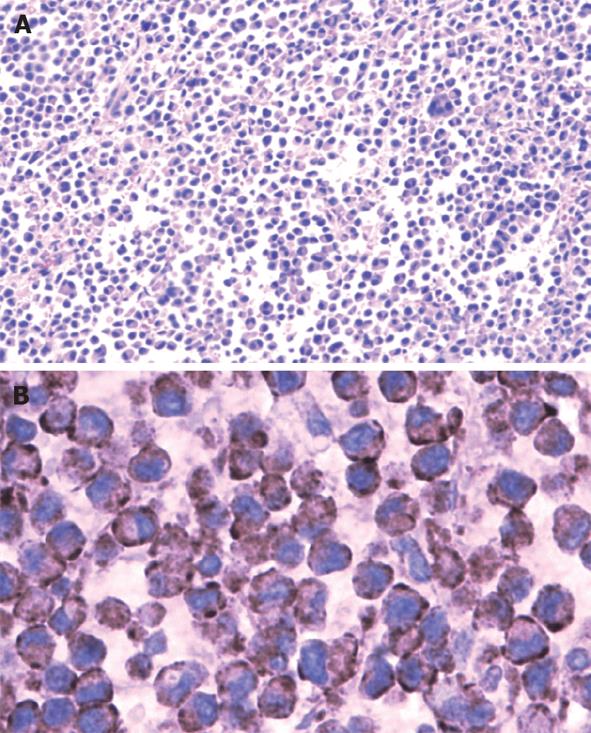 Figure 2 Tumor cells with homogenous amphophilic cytoplasm, whell-type and asymmetric nuclei, coarsely stippled chromatin, some acidophilic nucleoli, and occasional binucleate (A) (HE, × 100) and positive tumor cells for CD138 (B) (× 400) under microscope.

To confirm the diagnosis of EMP, further investigations were done after surgery. Serum IgG was 25.4 g/L (normal range 6.94-16.20 g/L). Serum IgA and IgM levels were within normal range. No Bence-Jones protein was detected in his urine. Iliac crest bone marrow aspiration and biopsy did not find any plasmacytic infiltration. A skeletal survey revealed no osteolytic lesions.

Solitary bone and extramedullary plasmacytomas are rare plasma cell proliferative disorders. Their diagnosis is based on the monoclonal plasma cell infiltration at a single disease site and the exclusion of systemic myeloma[3]. WBC and hemoglobin were slightly abnormal, and iliac crest bone marrow aspiration and biopsy showed no plasmacytic infiltration in our case. We ascribed these abnormalities to the fact that he worked as a painter for 8 years prior to surgery. Hematopathy can be found in workers exposed to benzene[4].

Solitary EMP rarely occurs in the retroperitoneum. Cases of retroperitoneal EMP have different clinical manifestations, such as renal failure due to bilateral renal vein occlusion[6], flank pain, hematuria due to thrombosis of the renal vein[7], obstructive jaundice[8], abdominal distention and pain[910], and hyperamylasemia[11]. However, our patient presented with only abdominal distention and effort intolerance.

Preoperative CT scanning does not contribute to its differential diagnosis from other tumors, while preoperative angiography can indicate the vessels feeding the mass and the correlation to other vessels. Serum electrophoresis can help its diagnosis by finding the M band. However, we considered the mass as a common type of tumors, such as schwannoma, sarcoma before operation and serum electrophoresis was not done.

No clear guidelines for treatment of EMP are available due to its rarity and variable presentations. EMP is highly radiosensitive with excellent results (< 10% of local recurrences and about 50%-65% of patients remain free of disease for > 10 years)[13]. However, it is associated with a high morbidity particularly when used for large retroperitoneal tumors. It was reported that there is no evidence that retroperitoneal EMP progresses one year after chemotherapy in combination with radiotherapy[14]. Chen et al[8] have reported a case of retroperitoneal EMP accompanying obstructive jaundice, who showed a complete response to sequential radiotherapy and chemotherapy.

Sharma et al[10] performed a complete surgical resection of a large bulky retroperitoneal EMP when the patient did not respond to chemotherapy, and found that the patient was symptom free 16 mo post surgery. Our patient did not receive chemotherapy or radiotherapy prior to operation. He was under observation 2 mo after surgery and remained asymptomatic when we wrote this paper.

In summary, EMP should be considered whenever a retroperitoneal soft tissue mass is identified.