AIM: To investigate the effect of pain relief after infusion of ropivacaine at port sites at the end of surgery.

METHODS: From October 2006 to September 2007, 72 patients undergoing laparoscopic cholecystectomy (LC) were randomized into two groups of 36 patients. One group received ropivacaine infusion at the port sites at the end of LC and the other received normal saline. A visual analog scale was used to assess postoperative pain when the patient awakened in the operating room, 6 and 24 h after surgery, and before discharge. The amount of analgesics use was also recorded. The demographics, laboratory data, hospital stay, and perioperative complications were compared between the two groups.

RESULTS: There was no difference between the two groups preoperatively in terms of demographic and laboratory data. After surgery, similar operation time, blood loss, and no postoperative morbidity and mortality were observed in the two groups. However, a significantly lower pain score was observed in the patients undergoing LC with local anesthesia infusion at 1 h after LC and at discharge. Regarding analgesic use, the amount of meperidine used 1 h after LC and the total used during admission were lower in patients undergoing LC with local anesthesia infusion. This group also had a shorter hospital stay.

CONCLUSION: Local anesthesia with ropivacaine at the port site in LC patients significantly decreased postoperative pain immediately. This explains the lower meperidine use and earlier discharge for these patients.

Since 1987, laparoscopic cholecystectomy (LC) has been the favored treatment for gallbladder lesions[1]. Historically, contraindications to LC have included obesity, pregnancy, acute cholecystitis, and cardiovascular disease. With experience gained from laparoscopic surgery, LC has been attempted successfully and has become the procedure of choice in each subgroup of patients[23]. A major benefit of laparoscopy in upper gastrointestinal surgery results from avoidance of an upper abdominal incision. LC has proven benefits of less pain and improved pulmonary function tests compared with small-incision cholecystectomy[4–6]. However, assessment of postoperative stay and return to normal activity has shown conflicting results[5–7]. Many trials have assessed methods of reducing pain after LC, and several aspects of pain after laparoscopy have been addressed[8–11]. These studies have concentrated on the mechanism of pain or focused on gynecological procedures, with an emphasis on the role of non-steroidal anti-inflammatory drugs (NSAIDs)[8]. Some of the reviews have demonstrated the heterogeneity of randomized controlled trials and have concluded that pain after LC is multifactorial[11]. Although, many methods of analgesia produce short-term benefits, this does not equate with earlier discharge or improved postoperative function.

This prospective and randomized controlled trial aimed to clarify the impact of infusion of local analgesia at the port site after LC on pain relief and postoperative outcome.

From October 2006 to September 2007, 72 patients undergoing LC by the authors (Yeh CN, Yeh TS, and Chao TC) at the Department of Surgery, Chang Gung Memorial Hospital, Taiwan were included in this prospective randomized controlled trial. The study subjects were adult patients who had been referred for elective LC for gallbladder lesions. The diagnostic work-up for patients with gallbladder lesions before LC included history taking, physical examination, abdominal ultrasonography, abdominal computed tomography, and magnetic resonance cholangiopancreatography. The study was approved by the local institutional review board of Chang Gung Memorial Hospital and all patients gave informed consent before taking part in the study.

The randomization was centralized and used a random permuted block design. Eligible patients were aged 20-85 years, not pregnant, and had adequate hematological, hepatic and renal function. The exclusion criteria were as follows: immunosuppressive drug therapy within the previous 6 mo; an immunosuppressive condition, including AIDS; autoimmune disorders; organ transplantation; radiotherapy or chemotherapy within the previous 6 mo; and insulin-dependent diabetes mellitus (type 1). Discharge from the wards was the primary endpoint. Clinical features, laboratory data, operative outcomes, pain score, and analgesic requirement were analyzed and compared between the ropivacaine and saline groups. Hospital stay was defined as the number of days from operation to the actual date of hospital discharge. Surgical mortality was defined as death that occurred within 1 mo after surgery.

A visual analog scale (VAS) with a 10-cm vertical score ranged from “no pain” to “worst possible pain”. The VAS was used to assess postoperative pain when the patient awakened in the operating room (about 1 h after surgery), then after 6 and 24 h, and before discharge. The pain score was recorded by the authors (Lee HL, Liu YY, Wang SY, Tsai CY, and Yeh CN). Pain intensity was estimated using a VAS and the amount of analgesics used. The biochemistry data, operative time, hospital stay, and perioperative complications were recorded.

All data are presented as the percentage of patients or mean ± SD. Numerical data were compared by independent two-sample t test or paired two-sample t test. Pearson χ2 test and Fisher exact test were used for nominal variables. All statistical analyses were performed using the SPSS computer software (Chicago, IL, USA). P < 0.05 was considered to be statistically significant.

Table 1 summarizes the demographic data of patients with gallbladder lesions receiving LC without local anesthesia (control group) and with local anesthesia (LA group). Both groups shared a similar age distribution and sex ratio. The two groups displayed no significant difference in ratio of previous abdominal operation, etiology of disease, and operative indications. The LA group had similar American Society of Anesthesiologists grade, operative time, operative blood loss, postoperative drain insertion, and complication rates as the control group. No 30-d mortality occurred in this study. The LA group had a significantly shorter hospital stay than the control group (1.1 ± 0.3 d vs 2.8 ± 2.7 d, P = 0.001). Table 2 displays the laboratory data of the 72 patients. No significant difference was noted between the two groups.

Table 3 and Figure 1 compare the pain intensity and analgesic requirement between the control and LA groups. Both groups achieved gradual pain relief after surgery in terms of VAS for pain and need for analgesics. However, the LA group experienced significantly less pain at 1 and 24 h after surgery and at discharge when compared with the control group. Furthermore, the LA group had less meperidine use at 1 h and total meperidine use after LC. However, there was no significant difference in acetaminophen use between the two groups (Figures 2,3,4). 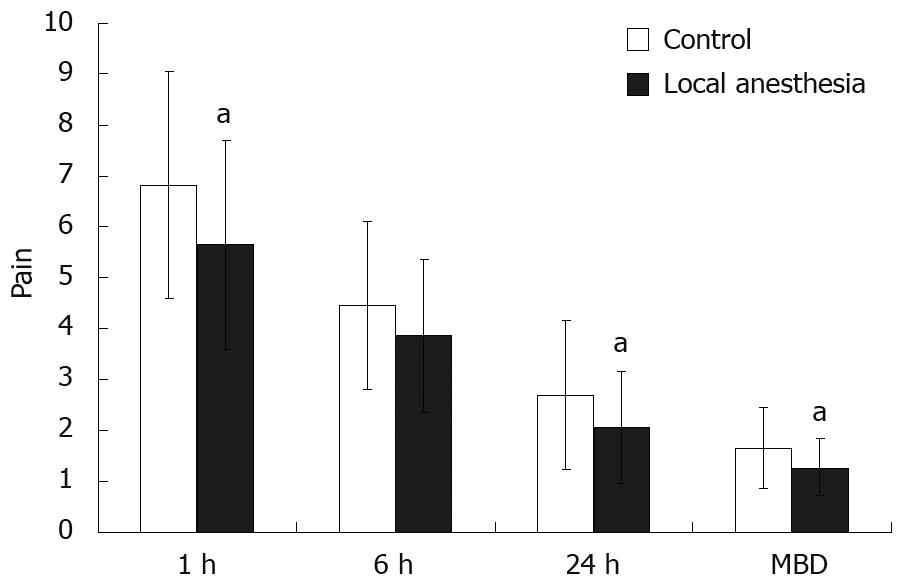 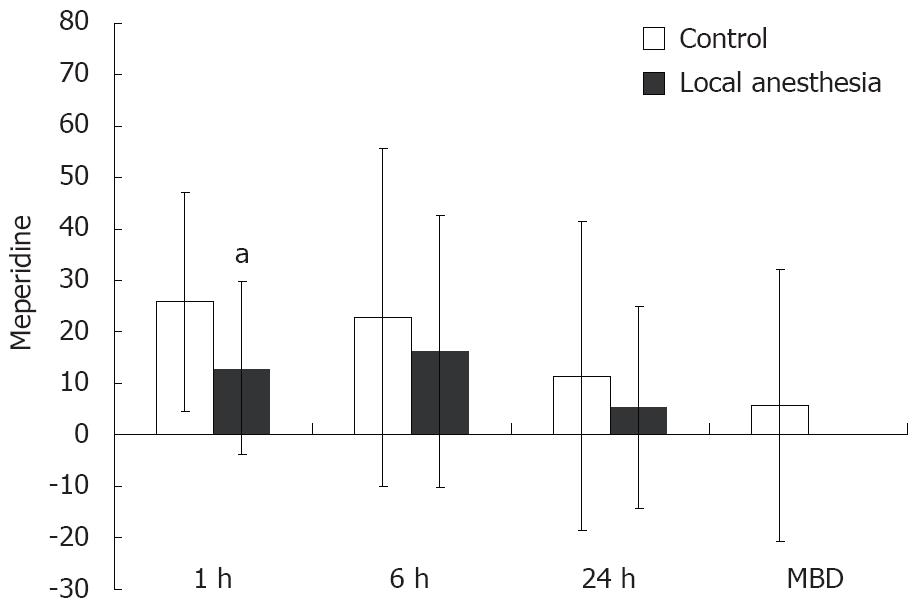 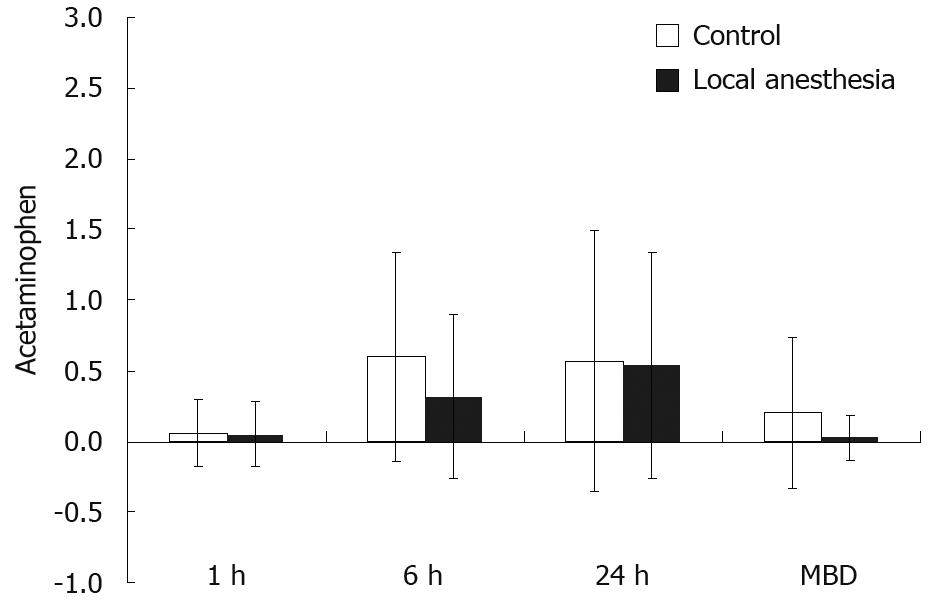 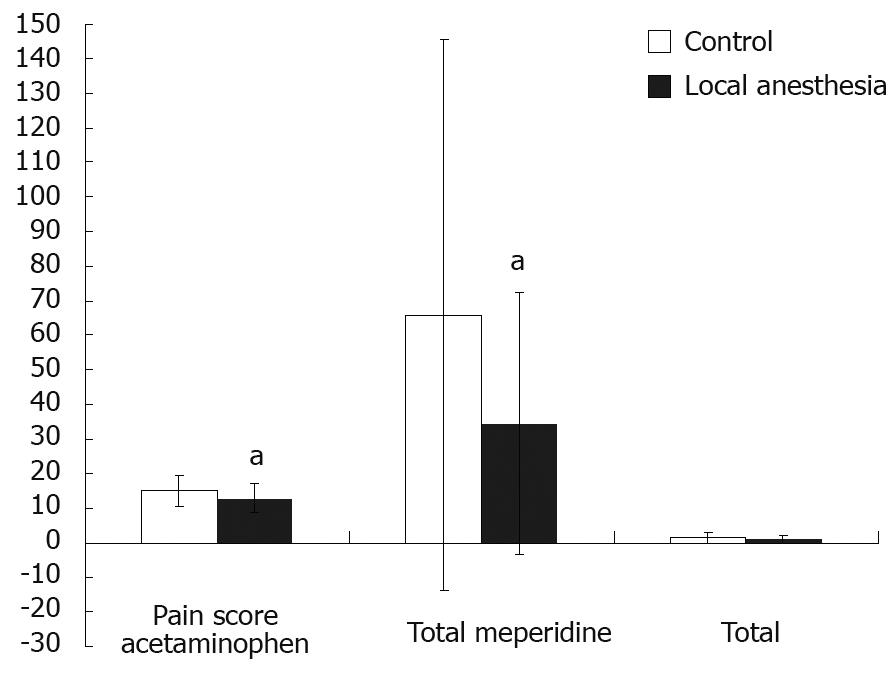 Postoperative pain associated with LC is less intense and lasts a shorter time than that seen with open cholecystectomy. This explains why patients can be discharged and returned to their normal daily activities earlier[12]. However, as seen in this study, LC is not a pain-free procedure. Pain remains a prevalent complaint of the early postoperative period after LC. This study clearly showed that pain reached a peak within the first few hours following the operation but diminished during the next 2-3 d, demonstrated by the distribution of the pain score and parenteral analgesic requirement. It has been reported that incisional pain is more intense than visceral pain and is dominant during the first 48 h after LC[13].

Several mechanisms have been proposed for generation of pain following laparoscopy: ruptured blood vessels caused by rapid distension of the peritoneum; traumatic traction on the nerves; release of inflammatory molecules; trauma to the abdominal wall, and when the gallbladder is removed from the abdomen; pneumoperitoneum created by use of CO2; maintenance of high abdominal pressure; irritation of the phrenic nerve; and application of cold CO2[14]. This explains why no consensus can be reached regarding effective postoperative pain relief in patients undergoing LC, because pain is multifactorial[11]. Although a number of studies have been conducted in an effort to reduce postoperative pain after surgery, the results have varied.

Postoperative pain control is directed at early mobilization, recovery, and discharge. However, pain also plays a major role in the metabolic and endocrine response, and is instrumental in the impairment of postoperative pulmonary function. Various methods have been investigated for reducing postoperative pain, such as local anesthesia[15], intraperitoneal infiltration of local anesthesia[16], preoperative administration of anti-inflammatory drugs[17], utilizing CO2 at body temperature, applying intrapleural morphine[18], and combined use of NSAIDs and opioids[19].

Ropivacaine is a new long-acting local anesthetic that was developed after the emergence of bupivacaine-related severe toxicity. The agent is a pure left-isomer and, based on its three-dimensional structure, it has less toxic potential on the central nervous system and the heart[20]. Several clinical studies have evaluated its toxicology and clinical profiles: theoretically and experimentally, some differences can be seen, but reflection of these characteristics in clinical practice has not been evident. However, the reduced toxic potential of the pure left-isomer supports its use in clinical situations in which the risk of systemic toxicity related to overdosing or unwanted intravascular injection is high, such as during epidural or peripheral nerve blocks. Adverse effects associated with the use of local anesthesia, such as allergic reactions and local tissue, cardiovascular, central nervous system and systemic toxicity, were reported as rare in one previous study[20], and we did not observe any adverse effect related to the use of local anesthesia. Generally, the present study confirms earlier evidence that, in patients with gallbladder lesion undergoing LC, local anesthesia infusion is more effective when applied at the end of an operation than at the start.

Local anesthesia with ropivacaine infusion at the port site in LC patients at the end of surgery significantly decreased postoperative pain immediately. This short-term benefit explains the lower parenteral analgesic use and earlier discharge for LC patients with local anesthesia infusion. However, another clinical trial including multiple factors regarding pain after LC should be conducted.

Although laparoscopic cholecystectomy (LC) is a less painful procedure than open cholecystectomy, patients still felt wound pain after surgery. We tried to improve postoperative pain relief by the use of local anesthesia.

Local anesthesia is used for postoperative analgesia and is effective. However, there have been few randomized studies performed. Good postoperative pain control will improve quality of life after LC.

Pain after LC may be caused by personal factors, duration of operation, intraperitoneal pressure, and the gallbladder lesion concerned. We used a prospective randomized trial to demonstrate that postoperative pain control improved by adding local anesthesia.

This local anesthesia procedure can be used routinely in other kinds of laparoscopic surgery to reduce postoperative pain.

The authors reported that local anesthesia with ropivacaine infusion was beneficial for LC. The present study was concerned mainly with anesthesia. However, this paper is interesting and instructive for surgeons. The presentation and readability of the manuscript are good.