Crohn’s disease (CD) is a chronic relapsing and remitting autoinflammatory disorder of the gastrointestinal tract that has many intestinal and extraintestinal complications. The purpose of treatment is long-term remission, reduction of complications, and improvement of patients’ quality of life. In many cases, this can be quite challenging and it is necessary to have a well thought out management strategy. We present the case of a 38-year-old woman with fistulizing CD that manifested as diffuse abdominal pain and bloody diarrhea accompanied by arthralgia. In addition, there were ulcerative lesions surrounded by cutaneous inflammation and erythema on her extremities, indicative of pyoderma gangrenosum. The patient was treated with high doses of parenteral methylprednisolone without any improvement and was started on adalimumab. A positive response to adalimumab therapy was observed: after 2 mo of therapy, the ulcerative skin lesion healed completely and the enterogastric fistula was closed after 5 mo adalimumab treatment. Adalimumab might be a suitable initial as well as maintenance therapy in patients with complicated CD.

Crohn’s disease (CD) is characterized by fissuring ulcers and segmental transmural inflammation of the gastrointestinal tract. The ileum is frequently involved in chronic inflammatory diseases; however, these can occur in any part of the digestive tract, from mouth to anus. Fistulas are the major and most common complications of the disease. The cumulative risk of any kind of fistula is 33% after 10 years and 50% after 20 years from the first appearance of the disease, as exemplified by a population-based study[1]. Although CD predominantly affects the gastrointestinal system, it is also associated with several extraintestinal manifestations. The most common extraintestinal disorders associated with inflammatory bowel disease (IBD) include dermatologic, ophthalmologic, musculoskeletal and hepatobiliary diseases; however, practically every organ system could be involved. These extraintestinal disorders can significantly contribute to morbidity and consequently impair the overall life quality of the patient considerably more than bowel-related symptoms.

Treatment is very complex and includes antibiotics and various immunomodulators. Surgery may be needed for therapy-refractory cases. The increasing number of advanced biological treatments for IBD offers new possibilities for the management of IBD associated with extraintestinal manifestations[2].

We report a case of successful adalimumab usage for CD complicated by enterocutaneous fistula, which also constituted an effective alternative treatment for pyoderma gangrenosum.

A 38-year-old woman presented with a 20-year history of CD, numerous complications and frequent relapses. Previously she had undergone several corrective gastrointestinal surgeries for perirectal fistulas. She carried a stoma since 1997 following left hemicolectomy and Hartmann’s procedure. She continued to receive maintenance 5-aminosalycilate (mesalamine) and budesonide therapy. Corticosteroid therapy and combined antibiotic/antimycotic treatment were used intermittently for increased disease activity resulting in moderate clinical response. The patient was unable to tolerate azathioprine.

In February 2004, she developed erythema nodosum on her extremities, which was resolved by corticosteroid-antibiotic treatment. The patient was referred to our department for further examination and management in November 2004, when she developed asymmetric oligoarthritis that responded well to treatment with a corticosteroid and maintenance methotrexate, resulting in remission for 6 mo. In 2005, the patient was treated with intravenous pulse cyclophosphamide for moderate to severe disease activity as a rescue therapy.

The patient remained in remission for 6 mo. In January 2007, she was admitted to our hospital again because of increased weakness, mild ulcerative skin lesions, and abdominal pain with bloody diarrhea. Additionally, she had arthralgia but no fever. Her blood tests showed a white cell count of 8.97 × 109 cells/L, a platelet count of 289 × 109 cells/L, a C reactive protein level of 68.57 mg/L, a hematocrit of 36 and an increased erythrocyte sedimentation rate (64 mm/h). Immunologic evaluation did not show B-cell/immunoglobulin disorders or antibody positivity. Upon physical examination, she had some small, red papules on her extremities with ulcerations on their surface that were characterized by pyoderma gangrenosum (Figure 1). In addition, we also found diffuse abdominal tenderness and an abdominal mass located in the periumbilical region. Her urine and chest X-rays were normal. Abdominal computed tomography (CT) showed a moderately enlarged spleen as well as thickened and inflamed bowel walls that are characteristic of CD (Figure 2). The inflamed bowels were surrounded by fat stranding, and CT also showed multiple enterocolic fistulas. Upper endoscopic examination revealed an enterogastric fistula from the corpus of the stomach to the stoma. Surgical correction was not an option because the patient did not agree to surgery. The patient received infliximab (Remicade; Schering-Plough) therapy as well as maintenance methotrexate therapy but there was no significant improvement in her symptoms and in her test results. 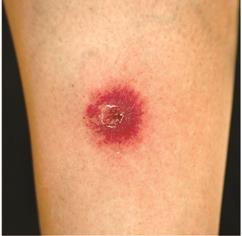 Figure 1 Small, red papules on the extremi-ties with ulcerations.

Figure 2 Enterogastric fistula from the corpus of the stomach to stoma on abdominal computed tomography (white arrow).

Following a failed course of infliximab (because of lack of response), adalimumab (Humira; Abbott Laboratories) was proposed as an alternative treatment. Adalimumab was administered subcutaneously at a dose of 80 mg/wk for the first 2 wk followed by 40 mg/wk afterwards. In addition, the patient was treated for a limited period with high doses of parenteral methylprednisolone and a combined antibiotic treatment. After 2 mo of therapy, the skin ulcers were completely healed. Subjective clinical improvement could be seen after 3 mo of therapy. The patient did not experience any adverse effects. After 5 mo of therapy contrast radiography of the bowel passage showed significant improvement. A 3-4 cm long, narrow and blind fistula originating from the stomach could be seen but it was not connected to the bowel. Nevertheless, the duodenum and jejunum were moderately inflamed and the terminal ileum was intact without inflammatory signs.

Up until now the use of adalimumab for fistulizing CD with extraintestinal manifestations has been reported in only a few cases. We reported a case of a woman with CD complicated by fistulas and pyoderma gangrenosum. The patient was successfully treated with adalimumab.

The connection between different extraintestinal symptoms and IBD is unclear. The shared and unique epitopes in the human colon, eye, joint and biliary epithelium may suggest an immune mediated process.

Pyoderma gangrenosum is one of these inflammatory cutaneous manifestations and it is independent of disease activity. This ulcerative cutaneous condition can either be associated with systemic inflammatory diseases (in at least 50% of cases) or it can occur alone. The diagnosis is made by excluding other causes of cutaneous ulcerations that are similar in appearance, including infection, malignancy, vasculitis, collagen vascular diseases, diabetes, and trauma. Treatment is relatively difficult. Currently, systemic immunosuppressants, often prednisone, are the mainstay of therapy. Long-term therapy with these agents is often required and can expose patients to possible adverse effects.

The treatment of IBD with extraintestinal manifestation has advanced in parallel to our increasing understanding of its pathomechanism[5–9]. One of the most well recognized proinflammatory mediators involved in the pathogenesis of IBD is tumor necrosis factor α (TNF-α). It is known that high levels of TNF-α have been associated with the development of intestinal inflammation in CD. The current evidence suggests that TNF-α blocking agents such as infliximab, adalimumab, and certolizumab pegol are effective maintenance therapy in CD. TNF-α blocking agents bind with TNF-α molecules thereby neutralizing the biological activity of TNF-α, resulting in the reduction of intestinal inflammation.

On other hand, treatment strategies for fistulizing CD are usually controversial. External fistulas are more responsive to medical therapy than internal fistulas in patients with CD. Combined treatment with antibiotics and immunomodulators may be a suitable initial therapy for CD patients with external fistulas. TNF-α blocking agents can also be used as an additional therapy in the treatment of corticosteroid dependent, refractory cases or in complicated extraintestinal manifestations[10].

This case report demonstrates the potential efficacy of adalimumab in the management of complicated fistulizing CD and/or pyoderma gangrenosum. Further studies into the use of adalimumab in this patient subgroup with CD are warranted.