Schwannoma is a well-described, benign nerve sheath tumor of the soft tissue, but is rare in the gastrointestinal tract. Gastrointestinal schwannomas are often incidentally discovered as small polypoid intraluminal lesions. In this report, we describe the clinicopathologic and immunohistochemical features of a distinctive neural mucosal polyp composed of a diffuse cellular proliferation of uniform bland spindled cells in the lamina propria that entraps the colonic crypts. Immunohistochemical analysis revealed strong and diffuse positivity for the S-100 protein. To avoid confusion of these solitary colorectal polyps containing pure spindled Schwann cell proliferation in the lamina propria with neural lesions that have significant association with inherited syndromes, it is better to use the designation “mucosal Schwann hamartoma”.

Schwannoma is a common soft tissue tumor, but it appears to be rare among spindle cell mesenchymal tumors of the gastrointestinal tract[1–4]. Colorectal schwannomas are uncommon, and are incidentally discovered as small polypoid intraluminal lesions, often with mucosal ulceration, during colonoscopy screening. Gastrointestinal schwannomas have characteristic histological features that are different from their soft tissue counterparts, such as the presence of a reactive lymphoid peripheral cuff, the absence of encapsulation and degenerative changes[5–7]. The tumors are mainly situated in the muscularis propria of the digestive wall. Rectal bleeding, colonic obstruction, and abdominal pain are the most common presenting symptoms. The separation of GI stromal tumors (GISTs) from gastrointestinal schwannoma is clinically important because the former group have a high risk of malignant behaviour[8–11], while the second are benign. Recently the designation “mucosal Schwann cell hamartoma” has been proposed for lesions containing diffuse pure Schwann cell proliferation in the lamina propria, which entrap adjacent crypts, to avoid confusion with the neural lesions that are associated with inherited syndromes such as von Recklinghausen’s neurofibromatosis[12]. In this study, we report a case of a colorectal polyp comprising diffuse Schwann cell proliferation in the lamina propria that belongs to the entity proposed.

A 60-year-old woman with no personal history of malignancy underwent a colonoscopy during the workup of occult blood in the stool. She had no family history of colon cancer and no history of familiar adenomatous polyposis, multiple endocrine neoplasia type IIb, neurofibromatosis type I, or Cowden syndrome.

Endoscopic examination showed a small sessile polyp of 0.5 cm in diameter without mucosal ulceration in the rectosigmoid colon. A biopsy was obtained. Hematoxylin and Eosin stained histologic sections showed a diffuse cellular proliferation of uniform spindle cells with elongated, tapering nuclei, and indistinct cell borders, arranged in whorls and vague Verocay bodies, entrapping adjacent crypts (Figure 1). The epicenter of the lesion was located in the lamina propria without involvement of the muscularis mucosae. No nuclear atypia, pleomorphia, or mitoses were seen. The immunohistochemical analysis demonstrated that all the cells were extensively and strongly positive for the S-100 protein (Figure 2A). Cells were negative for CD117 (KIT), α-smooth muscle actin (1A4) (Figure 2B), and CD34 (QBEND/10). Scattered mild chronic inflammation with the rare appearance of mast cells was present in the background. 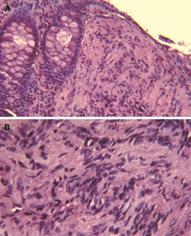 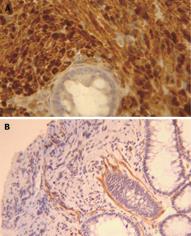 Figure 2 Immunohistochemical staining. The lesion consists of a pure population of Schwann cells, as shown by the diffuse immunoreactivity for the S-100 protein (A). Only scattered myoepithelial cells and vascular structures were highlighted by the immunostaining for α-smooth muscle actin (B).
DISCUSSION

Schwannoma (or neurilemoma) is an encapsulated nerve sheath tumour, common in the soft tissue. In the gastrointestinal tract schwannomas are rare and non-encapsulated, although well circumscribed[3]. They may appear as a small intramucosal nodular lesion, polypoid lesions, or poorly demarcated transmural proliferations[13]. According to the reports of Hou et al[7] and Daimaru et al[1] schwannomas were more frequently found in the stomach than in the colon or rectum. Miettinen and colleagues[3] and Lewin and colleagues[14], have described and characterized the largest series of colorectal schwannomas. Spindle cells variants have been found to be the most frequent, but epithelioid and plexiform schwannomas have also been described.

Herein we described a case of colorectal polyp in a female patient discovered during colonoscopy for the workup of occult blood in the stool. Histological examination of the polyp revealed a poorly circumscribed proliferation of uniform bland spindle cells, arranged in whorls and with a poorly formed area suggestive of Verocay bodies. The epicenter of the lesion was in the lamina propria, without involvement of the muscularis mucosae. Cellular spindle cell proliferation was interspersed between colonic crypts. No peripheral lymphoid aggregates, nuclear atypia nor mitosis were seen. The proliferated cells were strongly S-100 positive, and CD117, α-smooth muscle actin and CD34 negative, corresponding to the Schwann cell phenotype.

Mucosal neural polyps with similar features to our case have been recently described by Gibson et al[12], and we agree with author’s proposal of the new and interim designation of “mucosal Schwann cell hamartoma” for this lesion, to avoid confusion with the gastrointestinal neural lesions that have significant associations with inherited syndromes[15–17]. Our case should not be considered as an intramucosal schwannoma, although qualitatively composed exclusively of Schwann cells, because it presents peculiar histological features: the lack of circumscription, the absence of a peripheral lymphoid cuff[5], and crypt entrapment. Solitary ganglioneuromas and perineuriomas might predominantly involve the mucosa but the population of ganglion cells and the positivity for epithelial membrane antigen (EMA) are distinctive features. In contrast to neurofibromas, the polyp evaluated in our study was cytologically uniform, and, based on diffuse immunoreactivity for S-100 protein, seems to be composed essentially of a pure population of Schwann cells. Moreover, CD34 and neurofilament are useful stains for the differential diagnosis, because neurofibromas typically demonstrate a significant subpopulation of CD34-positive stromal cells and scattered axons.

Leiomyomas might also be encountered arising in association with the muscularis mucosae of the colon. They express desmin, calponin, and caldesmon but lack S-100 protein[14].

It is important in the GI tract to recognize GI stromal tumors (GISTs), which might pursue a malignant course. GISTs might have neural differentiation but they are typically reactive with c-kit/CD117 antibodies, and originate from or differentiate into the interstitial cells of Cajal with activating mutations in the KIT24-27 and PDGFRa genes[7–10].

In conclusion, the lesion we have encountered should be categorized as a mucosal Schwann cell hamartoma. Accurate histological differential diagnosis of this kind of lesion has clinical relevance, not only for immediate patient management, but also because it might provide the first clue to the existence of inherited tumor syndromes (searching for ganglion cells), which will have broader implications for the patient’s family and potentially important consequences for genetic counselling.