Citation of this article
Hansch A, Neumann R, Pfeil A, Marintchev I, Pfleiderer S, Gajda M, Kaiser WA. Embolization of an unusual metastatic site of hepatocellular carcinoma in the humerus. World J Gastroenterol 2009; 15(18): 2280-2282

Hepatocellular carcinoma (HCC) is the fifth most common cancer in the world. This case documents an unusual metastatic presentation of HCC in the humerus. Preoperative palliative arterial embolization of the tumor was performed to arrest severe tumor bleeding caused by the biopsy. Embolization turned out to be useful also in limiting/preventing potential uncontrolled bleeding during subsequent amputation.

Hepatocellular carcinoma (HCC) is the fifth most common cancer in the world[1]. The most frequent sites of extrahepatic metastases of HCC are the lungs, lymph nodes, bones, and adrenal glands[2], whereas the extremities, and especially the humerus, are very rare metastatic sites. Here we report an interesting case of humerus metastasis of HCC with severe hemorrhage after biopsy.

A 74-year-old man with a background of alcoholism and smoking initially presented with pain on the right side of the chest. Clinical examination revealed mild hepatomegaly and pallor. An abdominal ultrasound showed the presence of a solid mass in the right lobe of the liver, measuring 5.2 cm × 6.5 cm, with heterogeneous echotexture (Figure 1A). Computed tomography (CT) imaging of the abdomen confirmed the presence of a lesion in segment VIII of the liver, with central areas of necrosis (Figure 1B). An additional, smaller focal lesion was found also in segment VII of the liver (Figure 1C). Both lesions showed typical imaging characteristics of an HCC. Notably, a thrombosis of the portal vein was also present (Figure 1D), which presented a contraindication for chemoembolization of the HCC. The patient was discharged. 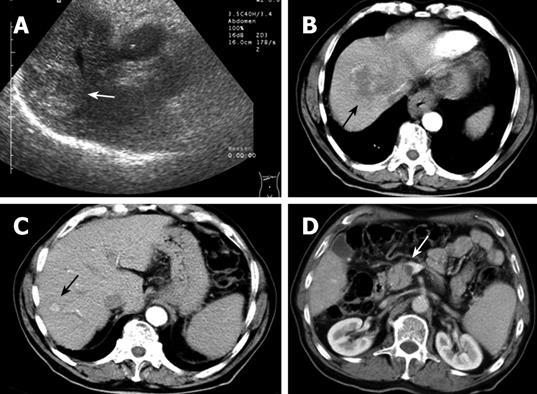 After 4 mo, the patient was referred again with progressive painful swelling of the left upper arm and superficial ulceration. An X-ray showed a destructive lesion of the left humerus, associated with a bulging soft tissue component (dimensions 5.5 cm × 4 cm). The diaphysis of the humerus was completely destroyed for a length of 4 cm (Figure 2A and B). Magnetic resonance imaging (MRI) clearly demonstrated a large osteolytic lesion (coronal dimensions 6.2 cm × 5 cm) in the left humerus space, with complete destruction of the bone (Figure 2C and D). The tumor reached the surface of the skin. A surgical biopsy was performed to sample tissue from the ulcerated mass. However, massive bleeding developed from the biopsy site immediately after excision. Because the hemorrhage could not be stopped by electrocauterization, it was decided to perform an arterial embolization on the assumption that possible HCC metastases would typically be hypervascularized. A 5 French cobra catheter was advanced from the femoral artery into the left axillary artery and a selective arteriogram was obtained. Injection of contrast medium showed a hypervascular, destructive tumor of the humerus (Figure 3A). Extravasation of the contrast medium indicated the presence of hemorrhage (Figure 3B). Afterwards, multiple accessible feeding branches were reached with superselective catheterization using a tracker catheter, and embolized with Bead Block (size 300-500 &mgrm, Terumo Europe, Leuven, Belgium). Follow-up angiographies during embolization showed stasis of flow within the tumor. At the end, partial tumor embolization was achieved. The medial parts of the tumor remained perfused, since not all the small-sized branches of this region could be accessed or localized (Figure 3C). However, bleeding was successfully stopped. There were no postprocedural complications. On the following day, amputation of the left arm was deemed necessary since an alternative treatment, e.g. osteosynthetic stabilization of the destroyed humerus, was not achievable (Figure 3D). Thus, a posteriori the embolization proved useful also as a measure to prevent uncontrolled hemorrhages during amputation. 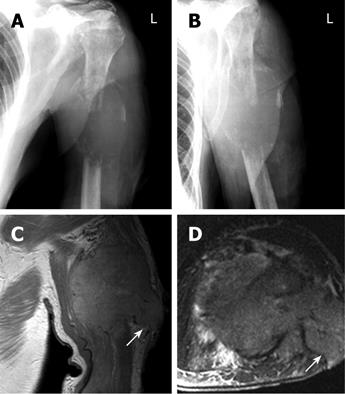 Figure 2 X-Ray (A, B) and MR imaging (C, D) of HCC metastasis at the humerus. A and B: Destructive lesion in the left humerus associated with a bulging soft tissue component, 5.5 cm × 4 cm in dimension; C: Coronal noncontrast PD-weighted (TR/TE, 1920/12) image demonstrating a soft tissue tumor (coronal dimension 6.2 cm × 5 cm) with complete destruction of the humerus, the tumor reached the surface with ulceration (arrow); D: Axial noncontrast TIRM sequences (TR/TE, 7400/92) show the edematous tumor in the centre of the extremity and the lateral tumor branch to the surface (arrow). In this region, a biopsy was taken which was followed by massive hemorrhage. 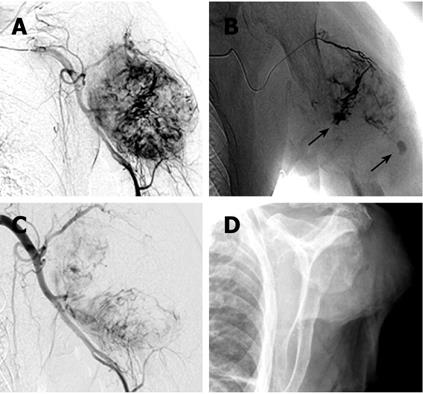 The histopathological evaluation of the biopsy confirmed the diagnosis of metastasis from the liver HCC (Figure 4). 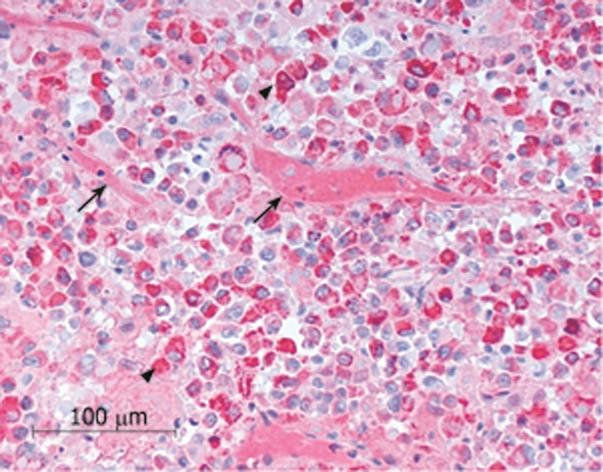 This report describes an unusual case of massive metastasis of a HCC carcinoma to the upper arm, with partial destruction of the humerus. To the best of our knowledge, no such cases have been reported in the literature to date. Also, while bone metastases of HCC usually manifest as multiple lesions, no other bone metastases were detected in this case.

The prognosis of HCC patients with extrahepatic metastasis is generally poor[3]. It is estimated that 30%-78% of HCC show metastases at autopsy[4]. HCC spreads mainly via the hematogenous route, causing intra- and extra-hepatic metastases that are generally hypervascular and, if located in the bone, osteolytic. Hypervascularity should be taken into account before biopsy excisions since the procedure can cause an uncontrolled hemorrhage, as reported here and by Chen et al[5] who described a life-threatening hemorrhage from a sternal metastasis of HCC. In the present case, the marked size of the tumor in the upper arm did not allow us to distinguish whether the metastasis had primarily localized in the muscle or in the bone. However, intramuscular HCC metastases are extremely rare[67], possibly because of the contractile action of muscle, its local pH environment, and/or the accumulation of lactic acid. Also, skeletal muscle produces tumor suppressors which may contribute to the rarity of metastases in the muscles[8]. A study with 194 autopsies of malignant tumors showed that macro- or micro-metastases of skeletal muscle were present only in 34 cases (17.5%)[9]. Metastases of HCC are clearly more frequent in the bone but, unlike the present humerus case, their most common sites are the vertebrae, the pelvis, and the ribs. In turn, bone metastases of HCC are commonly characterized by expansive soft tissue masses with bone destruction, as in the present case.

To date, only a few reports are available concerning arterial embolization of bleeding HCC metastases. This procedure can support treatment to reduce the tumor size[10] or to reduce the severity of the symptoms (e.g. pain or bleeding). Wallace et al[11] reported that patients with bone metastases who underwent embolization had a reduction of pain for 4-9 mo. In our case, the goal of embolization was to control the bleeding following biopsy excision. A posteriori, a benefit was also the containment/prevention of potential bleeding during amputation. Amputation became necessary because of the advanced tumor size and the degree of bone destruction.

In conclusion, this case documents an unusual metastatic presentation of HCC in the humerus. Preoperative palliative arterial embolization of the tumor was performed to arrest severe tumor bleeding caused by the biopsy. Embolization turned out to be useful also in limiting/preventing potential uncontrolled bleeding during subsequent amputation.