AIM: To verify that CD markers are available for detecting cancer stem cell populations and to evaluate their clinical significance in colon cancer.

METHODS: Immunohistochemistry for CD133, CD24 and CD44 was performed on the tissue microarray of 523 colorectal adenocarcinomas. Medical records were reviewed and clinicopathological analysis was performed.

CONCLUSION: CD markers were related to invasiveness and differentiation of colorectal adenocarcinoma. However, CD expression was not closely related to survival.

Colorectal adenocarcinoma is the second most common type of cancer and a major cause of cancer-related morbidity and mortality in the Western world[1]. The incidence of colorectal cancer has increased from 5.8% in 1980 to 10.3% in 2000 in South Korea, in part because of Westernization of the diet[2].

Recently, several CD markers have been identified as solid cancer stem cell markers. CD133, also known as PROML1 or prominin, is a stem cell surface antigen that has been recently identified as a potential cancer stem cell marker in brain, colon and prostate cancer[4–7]. CD44, also known as homing cell adhesion molecule, is a cell surface glycoprotein expressed on lymphocytes, monocytes and granulocytes, which has been identified as a stem cell marker in breast and head and neck cancer[89]. CD24, a cell surface marker, is a single chain sialoglycoprotein with a molecular mass of 42 kDa. CD24- and CD44-expressing pancreatic cancer cells show cancer stem cell characteristics[10]. Here, we report the identification of CD133-, CD24- and CD44-positive tumor cells in colon tumor sections by an immunohistochemistry-based technique, and discuss the findings in conjunction with clinicopathological data.

The most representative area was carefully selected and marked on an H&E-stained slide. The TMA was assembled using a tissue-array instrument (AccuMac arrayer; ISU ABXIS Co. Ltd., Seoul, Korea) that consisted of thin-walled stainless steel punches and stylets used to empty and transfer the needle content. The assembly was held in an X-Y position guide equipped with semiautomatic micrometers, with a 1-mm increment between individual samples and a 3-mm punch depth stop device. Briefly, the instrument was used to create holes in a recipient block with defined array cores. A solid stylet, which closely fits the needle, was used to transfer the tissue cores into the recipient block. Taking into account the limitations of the representative areas of the tumor, we used triplicate 1-mm diameter tissue cores from each donor block.

HE and immunohistochemical staining

Multiple 4-&mgrm sections were cut with a Leica microtome. Sections were transferred to adhesive-coated slides. One section was routinely deparaffinized with standard xylene and hydrated through graded ethanol in water, stained with HE, and covered with a coverslip. For immunohistochemical staining, the TMA slides were dewaxed by heating at 55°C for 30 min and by three 5-min washes with xylene. Tissues were rehydrated by a series of 5-min washes in 100%, 90% and 70% ethanol and phosphate buffered saline (PBS). Antigen retrieval was performed by microwaving the samples for 4 min 20 s at full power in 250 mL 10 mmol/L sodium citrate (pH 6.0). Endogenous peroxidase activity was blocked with 0.3% hydrogen peroxidase for 20 min. The primary polyclonal rabbit anti-CD133 antibody (Santa Cruz Biotechnology, Santa Cruz, CA, USA) was diluted 1:200 using goat serum and incubated at room temperature for 1 h. The primary monoclonal mouse anti-CD24 antibody (Santa Cruz Biotechnology) was diluted 1:50 and the primary monoclonal mouse anti-CD44s antibody (Neomarkers, CA, USA) was diluted 1:100. After three 2-min washes with PBS, the sections were incubated with a biotinylated goat secondary antibody for 30 min (DAKO, Carpinteria, CA, USA). After three 2-min washes with PBS, horseradish peroxidase-streptoavidin (DAKO) was added to the section for 30 min, followed by another three 2-min washes with PBS. The samples were developed with 3,3’-diaminobenzidine substrate (Vector Laboratories, Burlington, Ontario, Canada) for 1 min and counterstained with Mayer’s hematoxylin. The slides were dehydrated following a standard procedure and sealed with coverslips. We used the glioblastoma tissue as a positive control of CD133, the tonsillar lymphoid tissue as a positive control of CD24, and the tonsillar mucosal epithelial tissue as a positive control of CD44. Negative controls were performed by omitting CD133, CD24 and CD44 antibodies during the primary antibody incubation. The representative sections of CD133, CD24 and CD44 immunostaining are shown in Figure 1.

Figure 1 Representative photograph of the TMA slides with immunohistochemical staining. A: CD133; B: CD24; C: CD44.
Interpretation of CD133, CD24 and CD44 expression

CD133, CD24 and CD44 expression was evaluated semi-quantitatively by two independent pathologists (Paik SS and Song YS), in a blinded fashion without knowledge of clinical and pathological information. The sections were scanned at high magnification to assess the positivity of staining in tumor cells. We regarded the staining as positive in cases with cytoplasmic positivity. In cases of discrepant assessments, slides were reinvestigated by both pathologists under a multi-head microscope and an agreement was obtained. 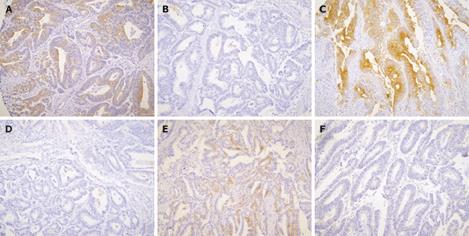 We examined the effect of CD marker expression on clinicopathological prognostic factors in colorectal adenocarcinoma. A significant prognostic influence of age, histological grade, AJCC stage, lymphatic invasion and vascular invasion on overall survival was found by univariate and/or multivariate analyses. However, no impact of CD133, CD24 and CD44 expression on overall survival was observed in univariate and multivariate survival analyses. Kaplan-Meier survival curves and log-rank tests showed no significant correlation between patient survival and CD133, CD24 and CD44 expression (P = 0.774, P = 0.775 and P = 0.636, respectively) (Figure 3).

Cancer stem cells have recently been proposed to be the cancer initiating cells that are responsible for tumorigenesis and for contributing to cancer resistance in leukemia[11]. Compared to leukemia, evidence for the existence of cancer stem cells in solid tumors has been more difficult to obtain for several reasons. Cells within solid tumors are less accessible, and functional assays suitable for detecting and quantifying normal stem cells from many organs have not yet been developed, and the cell surface markers required to isolate such cells have not been identified fully. However, there have been some impressive studies in this area recently. Advances have been made in identifying and enriching cancer stem cells in several solid tumors, including breast, brain and colon cancers[4–10].

Lapidot et al[12] have shown that leukemia-initiating stem cells present in the peripheral blood of acute myelogenous leukemia (AML) patients can induce AML when transplanted into severe combined immunodeficient mice. In 2003, Al-Hajj et al[8] isolated human breast cancer stem cells that can cause breast cancer in non-obese diabetic/severe combined immunodeficient (NOD/SCID) mice through serial transplantations, which suggests a capacity for self-renewal. The following year, Singh et al[6] have found evidence of stem cell involvement in brain cancer. Recently, O’Brien et al[4] have demonstrated that CD133-positive colon-cancer-initiating cells in the human colon cancer specimen generate tumors in the renal capsule of pre-irradiated NOD/SCID mice. More recently, cells have been isolated from human prostate cancer patients, which can produce serially transplantable prostate tumors in NOD/SCID mice[10]. Even though definitive cancer stem cell markers have not been found in all the previously mentioned studies, these studies have revealed that only a small subset of cells in different tumor types is capable of tumor formation and several candidate stem cell markers have been evaluated. While CD133, CD24 and CD44 have been tested as cancer stem cell markers for serial transplantation studies in various cancers, their prognostic value has not been elucidated clearly[4–10].

CD133, which is one of the most important cancer stem cell markers[4–7], was stained fairly well in 24.5% of our colon cancer patients. In terms of clinicopathological parameters, CD133 expression was related to gender and T stage. The present study revealed that male gender was positively related to CD133 expression. T0 and T1 colon cancers showed lower incidence of CD133 protein expression compared to advanced colon cancer.

CD24, another important cancer stem cell marker, was expressed in 50.5% of the colon cancer patients. Correlation between CD24 expression and clinicopathological factors was seen in degree of differentiation. CD24 consists of a small protein core comprising 27 amino acids, which is extensively glycosylated and is bound to the membrane via a phosphatidylinositol anchor[13–15]. Several reports have shown that CD24 can be expressed on several solid tumors such as small cell lung cancer, neuroblastoma, rhabdomyosarcoma and renal cell cancer[1617]. Lim et al[18] have reported that CD24 expression is related to lymph node metastasis in colon cancer. Weichert et al[19] have shown that cytoplasmic CD24 expression in colorectal cancer is independently correlated with shortened patient survival. We have not seen any positive correlation between CD24 expression and nodal status and patient survival.

CD44 is an unique adhesion molecule and several studies have revealed that CD44 is overexpressed at the mRNA and protein levels in colon cancer[2021]. In our study, large tumors bigger than 5.5 cm showed more frequent CD44 expression, which indicated that CD44 expression was related to clinical tumor burden.

Our results in human colon cancer specimens showed various expression patterns of CD markers. This is believed to be the first trial to verify the relationship between well-known prognostic factors of colon cancer and conventional cancer stem cell markers. Tumor invasiveness and differentiation were identified as clinicopathological factors related to cancer stem cell markers, especially CD133 and CD24.

In summary, we have presented some evidence that several conventional clinical factors were related to cancer stem cell markers in colorectal adenocarcinoma. However, CD133, CD24 and CD44 expression did not show a close relationship with the survival outcome of colorectal adenocarcinoma. These results warrant further careful and well-designed studies of colon cancer stem cells as markers for clinical application.

Colorectal adenocarcinoma is the second most common type of cancer and a major cause of cancer-related morbidity and mortality in the Western world. Countless treatment protocols including chemotherapy and radiation have been applied to colorectal cancer treatment and a number of studies have identified conventional prognostic factors. Recently, the prospective identification of colon cancer stem cells has received major attention because of their potential for colon cancer treatment.

This study focused on the identification of CD133-, CD24- and CD44-positive tumor cells in colon tumor sections by an immunohistochemistry-based technique, and the findings are discussed in conjunction with clinicopathological data.

The authors have presented some evidence that several conventional clinical factors were related to cancer stem cell markers in colorectal adenocarcinoma. However, CD133, CD24 and CD44 expression did not show a close relationship with survival. These results warrant further careful and well-designed studies of colon cancer stem cells as markers for clinical application.

CD133, also known as PROML1 or prominin, is a stem cell surface antigen that has been identified recently as a potential cancer stem cell marker in brain, colon and prostate cancer. CD44, also known as homing cell adhesion molecule, is a cell surface glycoprotein expressed on lymphocytes, monocytes and granulocytes, which has been identified as a stem cell marker in breast and head and neck cancer. CD24, a cell surface marker, is a single chain sialoglycoprotein with a molecular mass of 42 kDa.

The authors have presented some evidence that several conventional clinical factors were related to cancer stem cell markers in colorectal adenocarcinoma. This study is modestly reported with respect to a careful and large study. The approach needs to be encouraged, despite the relatively negative nature of the study with respect to the utility of the markers as a prognostic markers.