There have only been a few reports on lansoprazole-associated collagenous colitis. Colonic mucosa of collagenous colitis is known to be endoscopically normal. We present a case of collagenous colitis where the mucosa showed diffuse cloudiness mimicking ulcerative colitis. A 70-year-old woman developed watery diarrhea four to nine times a day. She had interstitial pneumonia at 67 and reflux esophagitis at 70 years. Lansoprazole 30 mg/d had been prescribed for reflux esophagitis for nearly 6 mo. Lansoprazole was withdrawn due to its possible side effect of diarrhea. Colonoscopy disclosed diffuse cloudiness of the mucosa which suggested ulcerative colitis. Consequently sulfasalazine 2 g/d was started. The patient’s diarrhea dramatically disappeared on the following day. However, biopsy specimens showed subepithelial collagenous thickening and infiltration of inflammatory cells in the lamina propria, confirming the diagnosis of collagenous colitis. One month after sulfasalazine therapy was initiated, colonoscopic and histological abnormalities resolved completely. Five months later the diarrhea recurred. The findings on colonoscopy and histology were the same as before, confirming a diagnosis of collagenous colitis relapse. We found that the patient had begun to take lansoprazole again 3 mo ahead of the recent diarrhea. Withdrawal of lansoprazole promptly resolved the diarrhea. Endoscopic and histological abnormalities were also completely resolved, similar to the first episode. Retrospectively, the date of commencement of sulfasalazine and discontinuation of lansoprazole in the first episode was found to be the same. We conclude that this patient had lansoprazole-associated collagenous colitis.

Collagenous colitis and lymphocytic colitis, collectively termed microcytic colitis, are considered to be etiologically related and to be a spectrum of the same disease[1]. The disease is well known to have normal mucosa endoscopically. However, endoscopic abnormalities are observed in about 30% of cases: abnormal vascular pattern, loss of vascular pattern, edema, and erythema[23]. The treatment of the disease is similar to that in ulcerative colitis[34]. The etiology of the disease is unknown but a significant proportion may be drug-induced[5–7]. Immunological disposition is implicated because the disease is often seen in patients with a variety of autoimmune diseases[48].

Lansoprazole is widely prescribed for gastroesophageal reflux and benign peptic ulcer disease. We present a case of lansoprazole-associated collagenous colitis where the mucosa showed diffuse cloudiness mimicking ulcerative colitis. We mistook this case initially for an atypical case of ulcerative colitis, and the patient was then diagnosed with collagenous colitis, which seemed to respond to sulfasalazine. In fact, the response was to the removal of lansoprazole.

A 70-year-old woman with watery diarrhea four to nine times a day in an orthopedic ward was referred to a gastroenterologist at the beginning of April 2007. She had a past history of: pulmonary tuberculosis and hypertension at 54 years, cerebral hemorrhage with a sequel of left hemiplegia at 63; diabetes mellitus, constipation, internal hemorrhoid and interstitial pneumonia at 67; neurogenic bladder at 68; gastroduodenal ulcers at 69; and reflux esophagitis at 70. She had a fracture of the femoral head and underwent surgery for insertion of an artificial femoral head on March 16, 2007. The patient had diarrhea four to nine times a day since March 26. Abnormalities on routine blood testing included mild anemia (hemoglobin 105 g/L), hypoproteinemia (49 g/L) and increased C-reactive protein (33 mg/L). Stool culture for pathogens was negative and fecal occult blood tests were negative. The following immunological and hormonal tests were normal: anti-nuclear antibody, rheumatic factor, perinuclear antineutrophil cytoplasmic antibody, anti-Scl 70 antibody, anti-centromere antibody, thyroid test, microsome antibody, free T3, free T4, and thyroid stimulating hormone. The gastroenterologist (MC) decided to check her drugs for diarrhea as a side effect and asked the orthopedist to withdraw lansoprazole 30 mg/d if possible, and to change loxoprofen sodium to etodolac. Lansoprazole had been prescribed for reflux esophagitis for nearly 6 mo and loxoprofen sodium had been prescribed for anal pain of unknown cause after the episode of diarrhea. Neither metronidazole of 1 wk duration for suspected antibiotic-associated diarrhea nor trimebutine maleate of 1 wk duration for suspected irritable bowel syndrome was effective. Therefore, colonoscopy was performed on April 16. This disclosed diffuse cloudiness of the mucosa in the entire colorectum observed from the rectum to the descending colon (Figure 1A). These findings suggested ulcerative colitis. Consequently, sulfasalazine 2 g/d was started that day. The patient’s diarrhea dramatically disappeared on the following day. The findings of three biopsy specimens each from the descending colon, the sigmoid colon, and the rectum showed similar results: erosion and moderate infiltration of inflammatory cells in the lamina propria (Figure 2A). Crypt abscess was not found, however, subepithelial collagenous thickening was found (Figures 2A and 3A). Therefore, collagenous colitis was diagnosed. One month later, colonoscopy showed a clear vascular pattern (Figure 1B) and disappearance of subepithelial collagenous thickening (Figures 2B and 3B). Neither lansoprazole nor loxoprofen sodium was prescribed on her discharge (May 25, 2007). The dose of sulfasalazine was later decreased from 2 g/d to 1 g, followed by 0.5 g/d. Since diarrhea recurred around the end of September 2007, the dose of sulfasalazine was increased to 2 g/d. However, diarrhea persisted and she was readmitted on December 10, 2007. Since the findings on colonoscopy and histology were the same as before, a relapse of collagenous colitis was diagnosed. Following admission, we found that the patient had been taking lansoprazole since July 2, 2007 which was prescribed by another hospital. At this time, we were aware of lansoprazole-associated collagenous colitis[9–12]. Lansoprazole was withdrawn on December 16. The diarrhea improved within a few days. Endoscopic and histological normalization was ascertained on January 31, 2008. We retrospectively found that in the first episode, the date of withdrawal of lansoprazole by the orthopedist coincided with the commencement of sulfasalazine. We finally diagnosed this patient as having lansoprazole-associated collagenous colitis.

Figure 1 Colonoscopy on April 16 (A) and May 17 (B), 2007 showed diffuse cloudiness of mucosa in the colon and clear normal vascular patterns, respectively. 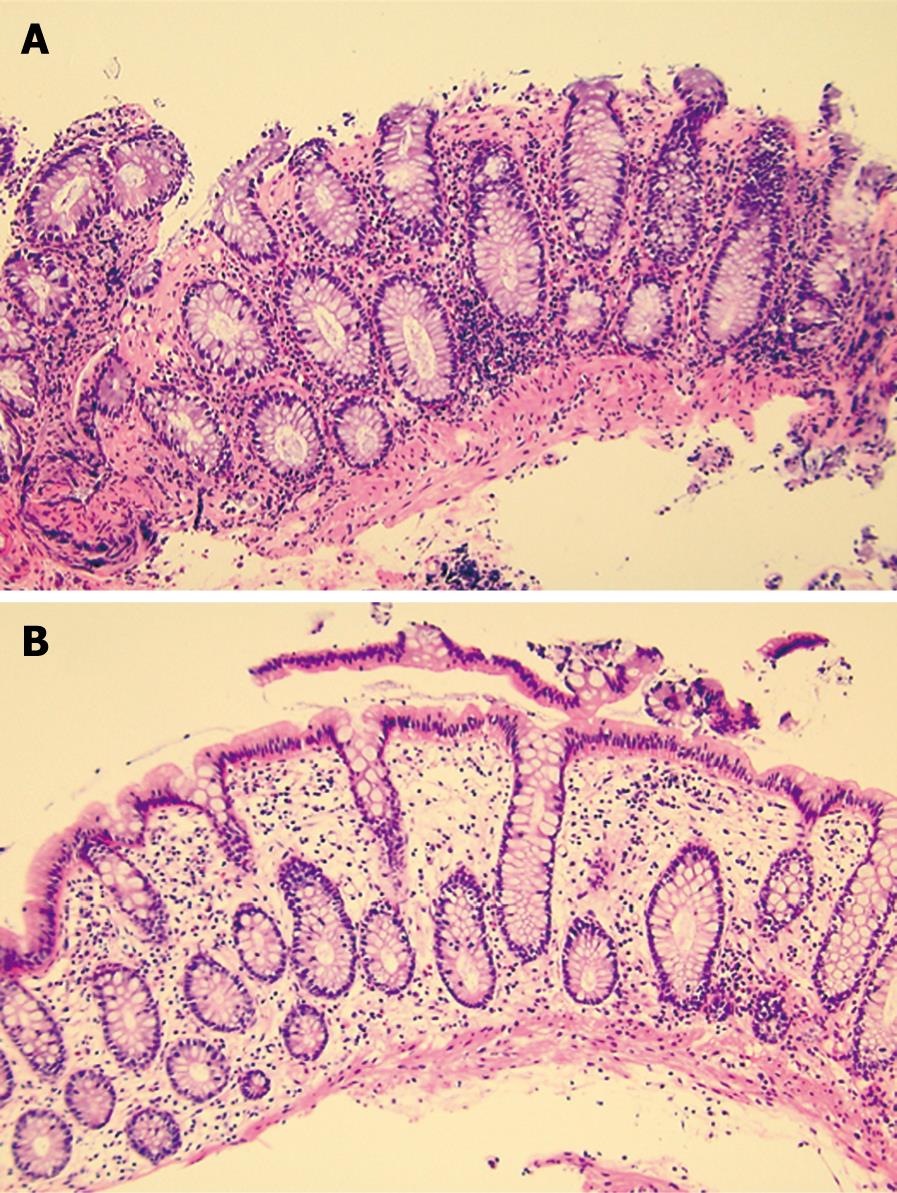 Figure 2 Biopsy specimens taken on April 16 (A) and May 17 (B), 2007 (hematoxylin and eosin staining, × 100). The former showed erosion, moderate infiltration of inflammatory cells in the lamina propria, and subepithelial collagenous thickening. The latter showed disappearance of these abnormalities. 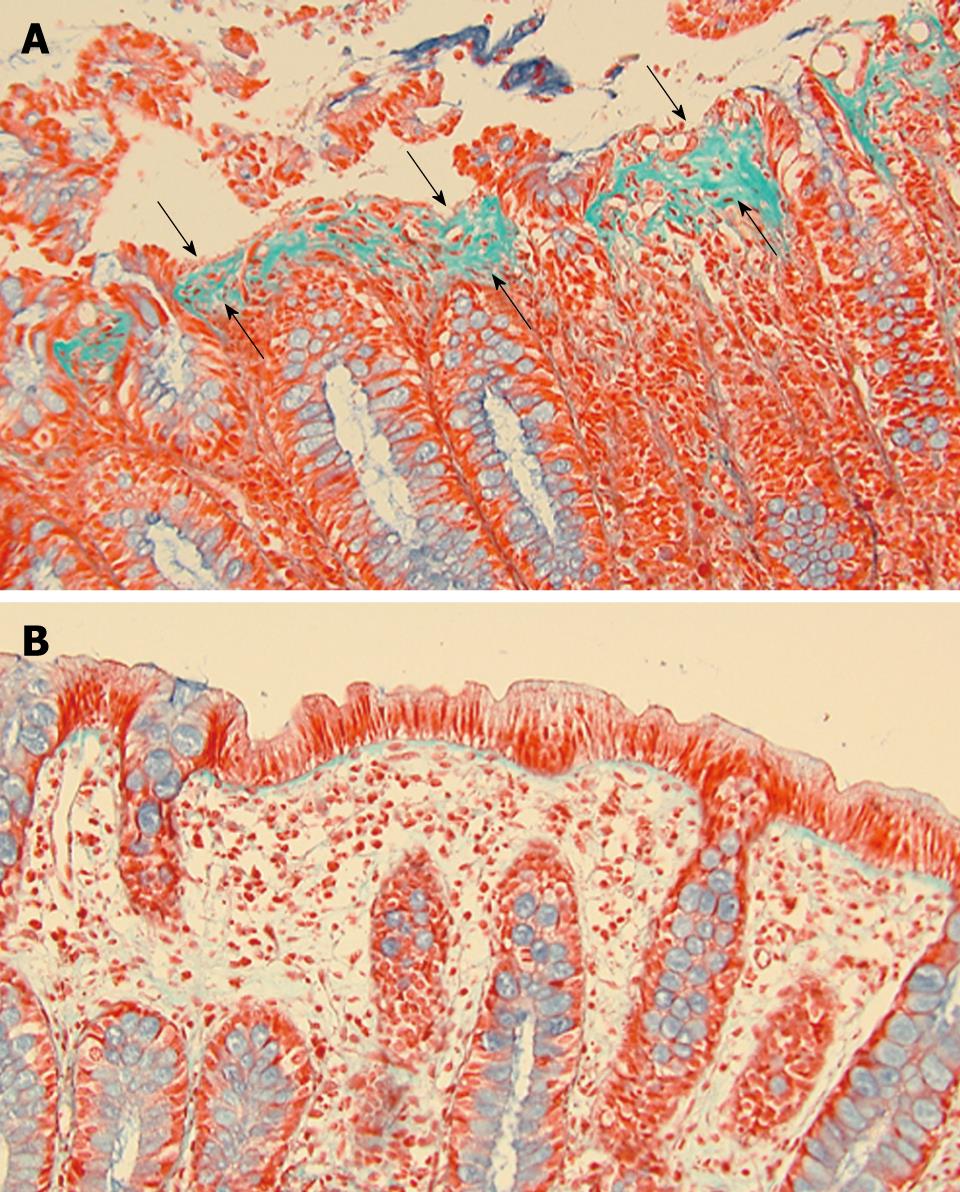 Microscopic colitis was originally described as mucosa that is endoscopically normal. Recently new endoscopic findings have been added: red spots[13], aphthoid ulcer[14], ulcer[6], mucosal tears[1516], hemorrhagic lacerations[17], and longitudinal ulcers[18]. In our case, distinct diffuse cloudiness of the mucosa was observed on two occasions in this patient with collagenous colitis. In collagenous colitis, in addition to subepithelial collagenous thickening, there are significant numbers of inflammatory cells in the lamina propria. These changes completely disappear on recovery. Therefore, it seems reasonable that diffuse mucosal cloudiness rather than normal mucosa is endoscopically observed in collagenous colitis.

From the present case it can be concluded that: diffuse cloudiness of colorectal mucosa can be seen endoscopically in collagenous colitis; lansoprazole can cause microscopic colitis; and discontinuation of lansoprazole results in the prompt resolution of diarrhea.