Endoscopic submucosal dissection (ESD) with a knife is a technically demanding procedure associated with a high complication rate. The shortcomings of this method are the inability to fix the knife to the target lesion, and compression of the lesion. These can lead to major complications such as perforation and bleeding. To reduce the risk of complications related to ESD, we developed a new grasping type scissors forceps (GSF), which can grasp and incise the targeted tissue using electrosurgical current. Colonoscopy on a 55-year-old woman revealed a 10-mm rectal submucosal nodule. The histological diagnosis of the specimen obtained by biopsy was carcinoid tumor. Endoscopic ultrasonography demonstrated a hypoechoic solid tumor limited to the submucosa without lymph node involvement. It was safely and accurately resected without unexpected incision by ESD using a GSF. No delayed hemorrhage or perforation occurred. Histological examination confirmed the carcinoid tumor was completely excised with negative resection margin.

Recently, colonoscopy has facilitated the diagnosis of rectal carcinoid tumors at an early stage. Theoretically, rectal carcinoid tumors less than 1 cm in diameter and a depth of invasion limited to the submucosal layer can be curatively treated by endoscopic resection[1–4]. Conventional snare polypectomy or endoscopic mucosal resection often results in incomplete resection of rectal carcinoid tumors and the need for additional surgery that sometimes requires a stoma[4–6]. Endoscopic submucosal dissection (ESD) has been reported to improve the rate of successful en bloc resection in early stage rectal tumors[6]. Furthermore, ESD can accurately control the depth of submucosal exfoliation under endoscopic view. However, ESD, and particularly the process of submucosal dissection, is technically difficult and carries a high risk of perforation and bleeding[6–9]. Conventional devices for submucosal incision such as IT knife and needle knife merely contact the knife to the submucosal tissue and cut using electrosurgical current. These cutting methods without fixing the knife to the target have a potential risk of incomplete resections or major complications due to unexpected incision. To resolve the problems related to ESD using a conventional knife, we have developed a grasping type scissors forceps (GSF), which can accurately grasp and incise the targeted tissue using electrosurgical current[1011]. In our previous study for early gastric neoplasms, we resected four tumors safely and easily without unintentional incision by ESD using the GSF[9]. In this report, we first describe a new method of ESD using GSF for rectal carcinoid tumors.

Colonoscopy on a 55-year-old woman revealed a 10-mm rectal submucosal nodule (Figure 1A). The histological diagnosis of the specimen obtained by biopsy was carcinoid tumor. Subsequent endoscopic ultrasonography (EUS) demonstrated a hypoechoic solid tumor in the submucosa without lymph node involvement (Figure 1B). It was treated by ESD using a newly developed GSF (XDP2618DT; Fujifilm, Saitama, Japan) (Figure 2)[10], after obtaining written informed consent from the patient. A two-channel multi-bending endoscope (GIF-2T240M; Olympus, Tokyo, Japan) was used in this case. During ESD, the patient was sedated with an intravenous injection of flunitrazepam (0.4 mg) and pethidine (35 mg). The ESD technique using GSF was carried out as follows (Figure 3). Marking dots were placed approximately a few millimeters outside the margin of the lesion with a hook knife (KD-620LR; Olympus, Tokyo, Japan), with a coagulation current of 20 W (Forced coagulation mode) created by an electrosurgical generator (ICC 200; Erbe, Tübingen, Germany). Next, a concentrated glycerin solution mixed with a small volume of epinephrine and indigo carmine dye was injected into the submucosal layer around the target lesion to lift the entire lesion. The lesion was separated from the surrounding normal mucosa (Figure 4A) around the lesion with the GSF using an electrosurgical current (Autocut mode 120 W). A piece of submucosal tissue was grasped and cut with the GSF (Autocut mode 120 W) to achieve submucosal excision. During the dissection, ESD using GSF can accurately control the depth of submucosal excision under endoscopic vision (Figure 4B). Finally, the lesion was completely resected (en bloc resection) by GSF (Figure 4C). It took 91 min for the ESD. Macroscopically, the mass was yellowish-white and solid, measuring 11 mm × 10 mm in diameter. Microscopically, the tumor was composed of small uniform cells, arranged in small nests and cords, with an anastomosing ribbon-like pattern in the submucosal layer. Immunohistochemically, the tumor cells were positive for synaptophysin. The vertical and horizontal cut margins were negative. There was no lymphovascular invasion. These findings established curative resection of the rectal carcinoid tumor (Figure 4D). After ESD, the patient stayed in the hospital and was prohibited from eating until the fourth day of ESD. Laboratory findings and chest and abdominal X-ray remained unremarkable after ESD. She was permitted oral soft food and discharged 7 d after the procedure. No hemorrhage, perforation, or other complication occurred. 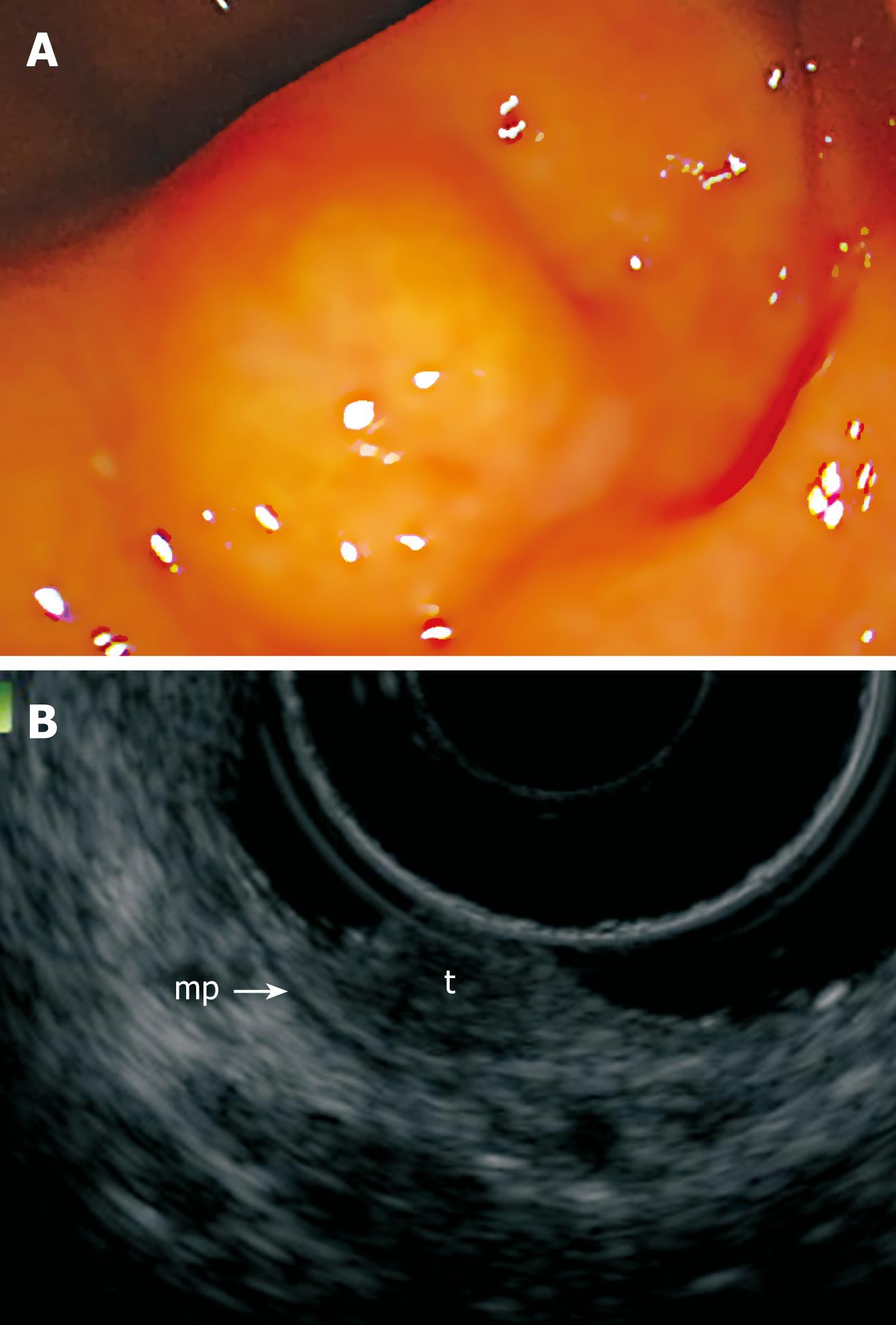 Figure 2 Distal tip of the GSF. The outer side of the forceps is insulated so that electrosurgical current energy is concentrated at the blade to avoid burning the surrounding tissue. 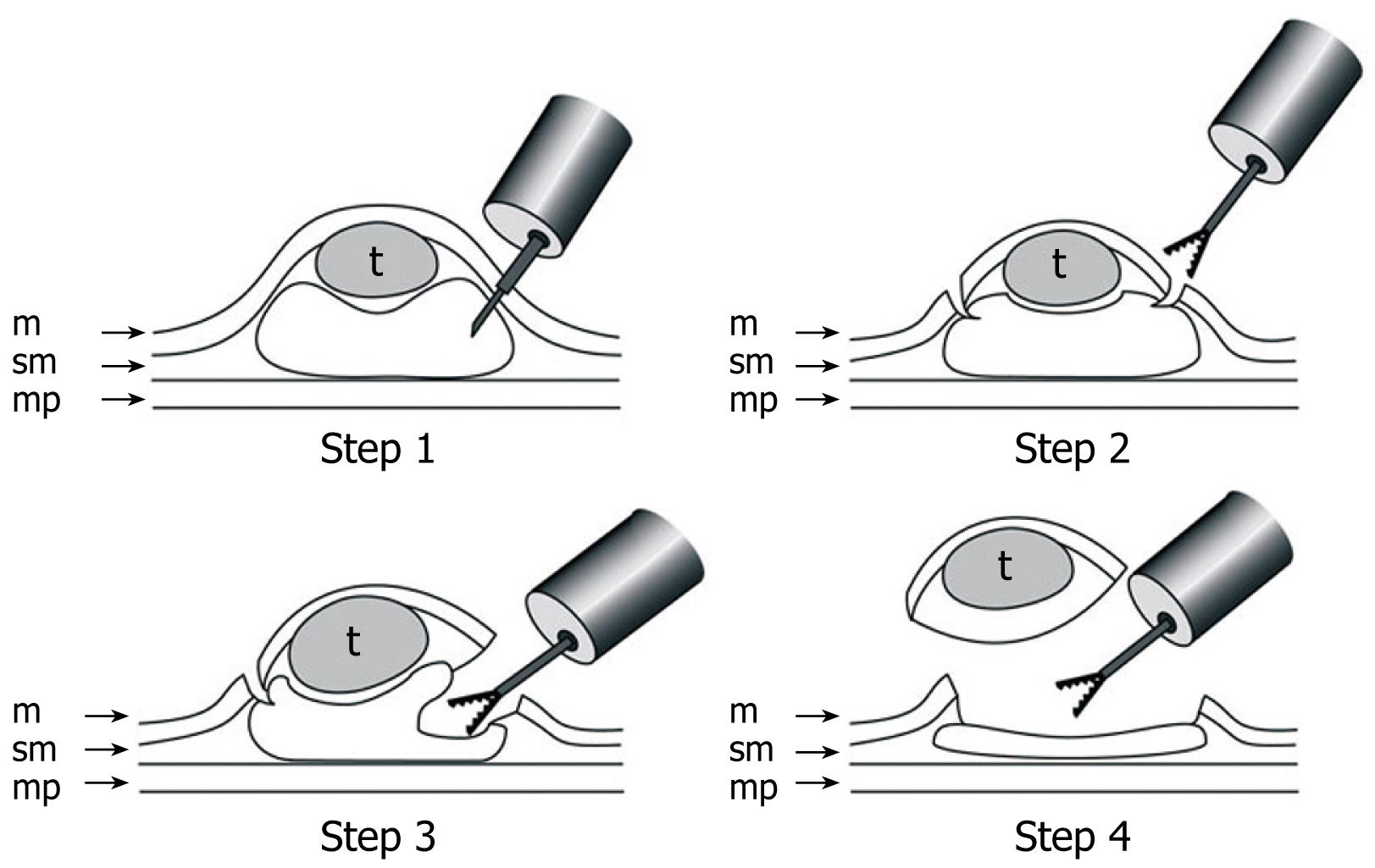 Figure 3 Schematic shows ESD using GSF. Step 1: A concentrated glycerin solution mixed with a small volume of epinephrine and indigo carmine dye is injected into the submucosal layer around the target lesion to lift the entire lesion; Step 2: The lesion is separated from the surrounding normal mucosa by complete incision around the lesion using the GSF; Step 3: A piece of submucosal tissue is grasped and cut with the forceps using an electrosurgical current to effect submucosal exfoliation; Step 4: The lesion is resected in one piece. m: Mucosa; sm: Submucosa; mp: Muscularis propria; t: Tumor.

The GSF (XDP2618DT) (Figure 2) can grasp and cut a piece of tissue, using an electrosurgical current. It has a 0.4-mm wide and 4-mm long serrated cutting edge to facilitate grasping the tissue. The outer side of the forceps is insulated so that electrosurgical current energy is concentrated at the blade to avoid burning the surrounding tissue. Furthermore, the forceps can be rotated to the desired orientation. The diameter of the forceps is 2.7 mm. The GSF is available for standard endoscopy with a working channel width of 2.8 mm or over. This device, which is disposable and not reusable, was used for circumferential marginal incision and submucosal dissection.

The advantages and disadvantages of the ESD using GSF, as well as alternative endoscopic options (ESD using conventional device, endoscopic mucosal resection etc), were discussed with the patient. The patient was aware of the experimental nature of the planned treatment. She gave her written informed consent to the designated intervention. This study was reviewed and approved by the ethics committee of Aso Iizuka Hospital. It was conducted in accordance with the ethical principles of the Declaration of Helsinki and in compliance with good clinical practice.

The rectum is one of the most frequent primary sites of carcinoid tumors. Rectal carcinoids less than 2 cm rarely metastasize, indicating local excision including endoscopic resection[2]. Furthermore, when the tumor is smaller than 1 cm and the depth of invasion is limited within submucosa, the risk of metastatic disease is extremely low, and endoscopic resection is considered curative[1–5]. Technically, complete resection of carcinoid tumors of the rectum is difficult with conventional endoscopic polypectomy[12], because 76% of these tumors extend into the submucosa[4–6]. However, various modified endoscopic therapies, such as strip biopsy[13], aspiration resection[14], band-snare resection[15] and endosonography probe-guided band ligation[16] result in good outcome for submucosal rectal carcinoid tumors less than 1 cm, so the application of ESD for carcinoids may be limited. When the lesions are larger, around 1-2 cm (1.1 cm in our case), or massively invade the submucosal layer, which may result in tumor-positive margin resection[3], incomplete resection with endoscopic resection sometimes results in the need for additional surgery. In such circumstances, ESD should be applied[3].

ESD was originally developed to obtain one-piece resection for early gastric cancers[7–11]. ESD has the advantage of permitting en bloc resection and histologically complete resection. On the other hand, this method has the disadvantages of a long procedure time and a high frequency of complications, as well as demanding a high level of technical skill. However, ESD can control the depth of submucosal dissection under endoscopic view[6–11]. Therefore, ESD is a theoretically suitable therapeutic option for rectal carcinoid located within the submucosa[236]. If the tumor invades the muscularis propria, ESD is contraindicated due to the risk of perforation and metastasis. Pretherapeutic EUS is vital for decision making concerning the indication of ESD for this disease.

Incision using knife devices merely contact the knife to the tissue and cut using electrosurgical current. These cutting processes without fixing the device to the targeted tissue make it difficult to place the knife accurately during electrosurgical incision because of bowel movement. Lack of complete endoscopy control can cause unexpected incision and result in incomplete resection or severe complications such as perforation and bleeding[6–9]. Our approach was to perform endoscopic resection with a GSF that can be passed through the ordinary working channel. This device was developed by us for ESD of early gastric cancer[1011]. It has a thin serrated cutting edge to facilitate grasping the tissue. The outer side of the forceps is insulated so that electrosurgical current energy is concentrated at the blade to avoid burning the surrounding tissue. Furthermore, the forceps can be rotated to the desired orientation. Theoretically, the main advantage of GSF for ESD is the fixed device, which can accurately control the depth of submucosal exfoliation under good endoscopic vision[11]. GSF can be used to grasp the targeted tissue again if necessary, before electrosurgical cutting. Furthermore, the GSF can reduce post-cut hemorrhage by a compression effect similar to a polypectomy snare[11]. Thus the grasping step before cutting allows accurate targeting and compression of the vessel, and reduces the chance of incomplete resection and major complications (perforation and bleeding). In our method, sufficient separation of the tumor from the underlying muscularis propria, using submucosal injection of the solutions, is effective in preventing perforation due to thermal damage or capture of the muscularis propria by the GSF. Therefore, frequent additional submucosal injection of solution during the procedure is vital to reduce the risk of such complications. Each cut of the GSF goes a length of about 4 mm. As for the perforation, the direction of the device is the most important factor. If the device goes as far as the muscularis propria, perforation will occur, so we should operate the device parallel to the muscularis propria. The maximal advantage of the GSF is having the visual confirmation step for accurate and safe targeting by the device before cutting during the grasping stage. However, the GSF is unsuitable for marking like an IT-knife. For marking, a needle knife, flex knife, argon plasma coagulator probe, etc are available. In our method, we used a hook-knife. Furthermore, if the scope is strongly retroflexed, the rotation of the GSF is a little difficult. This is the limitation of this device. In this case, it was safe and accurate to resect the rectal carcinoid with a sufficient negative resection margin using GSF. To the best of our knowledge, this is the first report of ESD using GSF for rectal carcinoid. We believe this technique has the potential to become the method of choice for removal of GI tract carcinoid tumor when the tumor is limited to the submucosa.