AIM: To discuss the expression of glactin-3 in liver metastasis of colon cancer and its inhibition by modified citrus pectin (MCP) in mice.

CONCLUSION: Expression of galectin-3 increases significantly in liver metastasis of colon cancer, which can be effectively inhibited by MCP. 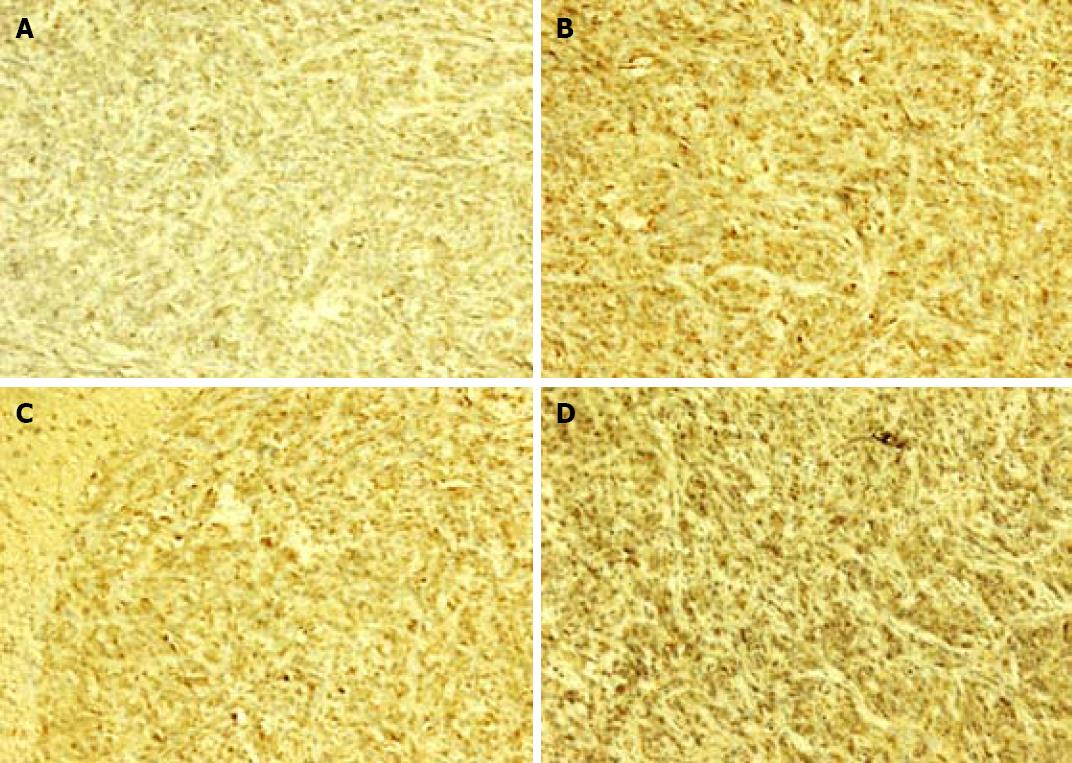 Seventy-five 6-8 wk old Balb/c female mice, offered by Guangdong Medical Laboratory Animal Center (certification No. 2006A019), weighing 20-25 g, were used in this study. The mice were free from specified-pathogens. Experiments were performed in the SPF Animal Laboratory.

Establishment of mouse model of liver metastasis of colon cancer

Seventy-five Balb/c mice were randomly divided into negative control group, positive control group, low MCP concentration group, middle MCP concentration group and high MCP concentration group. The concentration of MCP in drinking water was 0.0%, 0.0%, 1.0%, 2.5% and 5.0% (wt/voL), respectively. CT26 cells in exponential growth with sufficient NS were used to mix up into a suspension (1 × 106/mL). The mice were anesthetized with 4% chloral hydrate (10 mL/kg) by injecting into their abdominal cavity and an abdominal wall incision paralleling the left subcostal margin was then made. Laparotomy was performed and 0.05 mL of CT-26 suspension was injected into the spleen. A same volume of NS was injected into the abdominal cavity of mice in the negative control group. The incision was closed with #1 suture. All mice continuously received MCP dissolved in drinking water from the 2nd d after operation, to the necropsy day 21. A same volume of distilled water was given in negative control group. All mice had free access to food and water during the experiment.

Liver tissue sections were stained with HE to select typical nidi, such as a region rich of neoplasms but lack of necrosed areas and bleeding. A tissue microarray meter was used to perforate into a paraffin block (25 mm × 25 mm × 20 mm). The diameter of each hole was 1.2 mm, and the distance between two holes was 1.0 mm. Fifty holes were arranged in 10 lines and 5 arrays. A 1.2-mm long puncture needle was used to draw out the marked typical tissue core and to transfer it to a certain location on the paraffin block. Forty-seven metastasis samples were arranged into 2 paraffin blocks. Each sample included 2 marked cores. The tissue array paraffin was kept on a 55°C copper board for 30 min. The paraffin block was pressed gently to array the tissue cores and cooled at room temperature. The arrays were sliced quickly after pre-cooled at 4°C for 4 h.

No mouse died during the 3-wk experiment period. Some mice were found to have tumor mass bulging on the abdominal wall. Some of the cancer-carrying mice appeared signs of mental depression, such as reduced activity, slow response, gloomy hair color, loss of appetite (Figure 1).

Concentration of galectin-3 in serum

Expression of galectin-3 in liver metastasis

Liver metastasis of colon cancer includes tumor cell infiltration, exfoliation, adhesion, aggregation and invasion, which involve carbohydrate-mediated recognition proteins, such as the galectins. Adhesion of tumor cells to tumor embolus and anchorage of tumor cells to blood vessel endothelium or basement membrane are the two crucial steps of liver metastasis of colon cancer. Different galectins expressed in different steps of metastasis cascade might play a crucial role in tumor progression[8]. Galectin-3, a member of the lectin family, is a multifunctional oncogenic protein which regulates cell growth, adhesion[9], proliferation and apoptosis, as well as cell-cell interaction and angiogenesis[10-13]. A large body of evidence has confirmed that metastatic cancer cells significantly express galectin-3, and high expression of galectin-3 can be detected in both primary and metastatic lesions[14], even in blood[15], showing a strong relation with cancer growth and metastasis[16-18]. Moreover, the expression of galectin-3 can be used as a diagnostic and prognostic marker of colorectal cancer[19-21]. Therefore, if the function of galectin-3 is blocked, the progression of adhesion and aggregation can be intercepted, which may stimulate the development of novel drugs for the targeted treatment of colorectal cancer and other cancers[22].

MCP is a non-digestible, water-soluble polysaccharide fiber derived from citrus fruits, and also a complex polysaccharide rich in galactosyl residues. MCP can specifically inhibit carbohydrate-binding protein as a high affinitive ligand[23]. When the concentration of MCP reaches an adequate level, galectin-3 protein on the surface of cancer cells would be almost completely blocked by MCP molecules. As a result, the procession of adhesion and aggregation between cancer cells will be intercepted. In addition, MCP can inhibit morphogenesis of endothelial cells and angiogenesis by blocking galectin-3, thus intercepting cancer cells to absorb nutrition from vessels and cancer progression[24,25]. However, there is no evidence that MCP attacks cancer cells directly or indirectly with or without toxicity and side effects[26]. In vitro experiments have shown that MCP is able to inhibit adhesion of cancer cells to laminin and homotypic aggregation[27]. Animal experiments also showed that oral MCP can inhibit the growth and metastases of rat prostate cancer cells[28], human breast cancer[5] and melanoma cells[29-31].

The results of our study show that MCP could effetely inhibit the growth and metastasis of implanted colon cancer in mouse spleen. The number of liver metastases and tumor volume in high MCP concentration group were significantly less and smaller than those in control group, indicating that MCP can inhibit the growth and metastasis of colon cancer in a dose-dependent manner, which is consistent with the reported data[5,28-30]. In contrast, low MCP concentration group showed no significant difference in colon cancer growth and liver metastasis, which may be due to the lack of samples and the low sensitivity of non-parametric statistics. Further studies are needed to clarify the role of MCP concentration in this regard.

ELISA and immunohistochemistry analysis have shown that MCP does not impact glactin-3 concentration and expression in liver metastatic cancer cells, but inhibits liver metastasis in vitro[30]. The possible mechanism is that MCP only blocks out galectin-3 molecules on the surface of cancer cells, but does not intercept the expression or secretion of cancer cells. It was recently reported that galectin-3 can be used as a reliable diagnostic marker of colorectal cancer and is one of the target proteins in cancer treatment[22].

Galectin-3 is a carbohydrate-binding protein closely related with cancer growth and metastasis. Studies have shown that galectin-3 is over-expressed in different types of cancer. Dietary components play an important role in cancer progression and metastasis, carbohydrate-mediated recognition processes participate in cancer progression. Modified citrus pectin (MCP), a non-digestible and water-soluble polysaccharide fiber derived from citrus fruits, can inhibit galectin-3-mediated function in vivo and in vitro.

The role of galectin-3 in cancer growth and metastasis is an important field in tumor research. Several experimental studies have reported the specific inhibitory effect of MCP on different cancer cells in xenograft models. The present study investigated the effect of MCP on colon cancer growth and liver metastasis in vivo. In addition, the expression of galectin-3 was also studied to describe the possible anticancer mechanism of MCP.

Few experiments have been conducted to observe the effect of MCP on preventing cancer growth and metastasis in vivo. This study showed the inhibitory effect of MCP on liver metastasis of colon cancer in a mouse model. Besides, the expression of galectin-3 in tumor tissue and serum was tested to describe the galectin-3 status during MCP treatment.

This study demonstrated that galectin-3 was over-expressed in liver metastasis of colon cancer and oral MC could inhibit cancer growth and metastasis in a mouse model. The results show that galectin-3, as a potential marker and therapeutic target of colorectal cancer, played an important role in prevention and treatment of cancer.

In this manuscript, the authors studied the inhibitory effect of MCP on liver metastasis in a mouse colon cancer model. The study demonstrated that MCP inhibited liver metastasis by suppressing the function of galectin-3. The study is well designed and the results are reliable.