Fundic gland polyps are the most common gastric polyps. They are usually small in size, sporadic and asymptomatic. We present a case of giant fundic gland polyp. Our case is particular because of the clinical presentation, the endoscopic and endosonographic documented findings, and the treatment options followed. 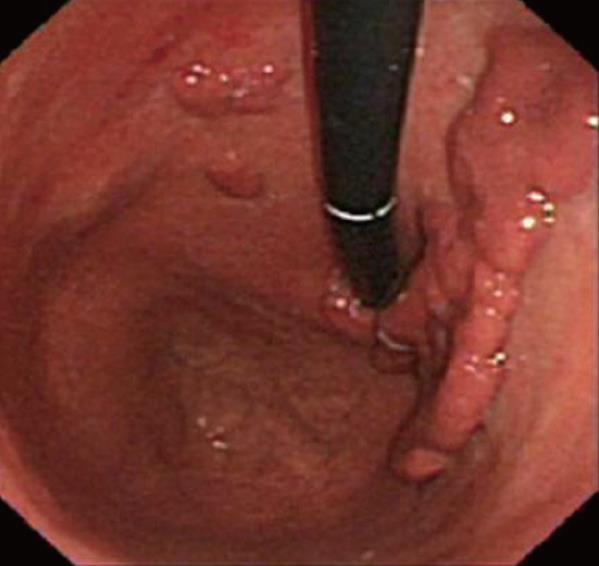 Figure 1 Endoscopic appearance of the giant FGP and the two small satellite polyps. 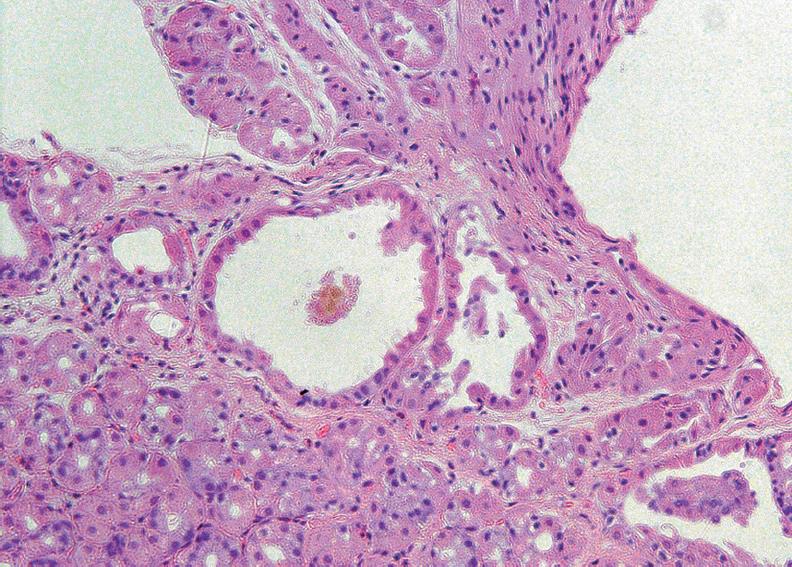 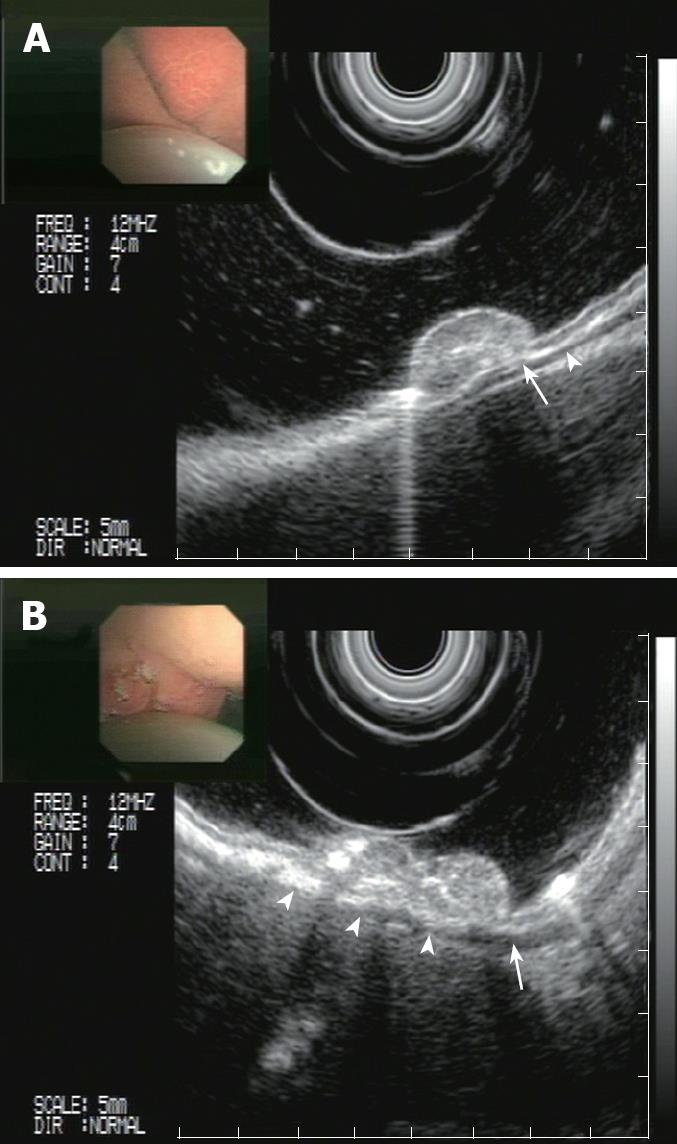 Figure 3 EUS images of the gastric polyp. A: The polyp involves the mucosa without reaching the submucosa (arrow) or muscularis propria (arrowhead); B: Mixed echogenicity of the polyp (EUS view at a different level).

Fundic gland polyps (FGPs) account for about 47% of all gastric polyps[1]. They are found in up to 1.9% of the general population, 5% of patients presenting for upper gastrointestinal endoscopy, 84% of patients with familial adenomatous polyposis (FAP), and in 93% of those with attenuated-FAP (AFAP)[1,2]. FGPs are usually asymptomatic, though some patients may complain of dyspepsia. Most FGPs are sporadic and number less than 10 in a given patient. Typically their size is between 1 and 5 mm; however, larger polyps are occasionally observed[3]. FGPs tend to occur mostly in women during the 5th or 6th decade of life[4], but they have been described as early as 8 years of age in patients with FAP[1].

We present a case of giant sporadic FGP that was associated with positive fecal occult blood test (FOBT). We describe its endoscopic, endosonographic and histologic features and discuss the decision for surveillance.

The patient was re-evaluated at 3 and 8 mo. He remained asymptomatic. Repeat stool occult blood was positive on 3 occasions. Laboratory studies showed normal hemogram and iron studies. A repeat esophagogastroduodenoscopy (EGD) and EUS confirmed the previous findings. Biopsies from the polyp were unchanged, while biopsies of the surrounding mucosa revealed mild chronic active gastritis and rare H pylori-like organisms for which the patient received eradication therapy.

FGPs are the most common gastric polyps. The size of FGPs varies between 1 and 5 mm. Unlike adenomatous polyps where a size more than 2 cm has been suggested as critical in the determination of malignant potential, the size of sporadic FGPs is not considered a risk factor for malignancy[5]. Six cases of giant FGPs of different sizes have been reported in the literature[6-11]. The histologic diagnosis of sporadic FGP was reported in only one of the cases[8], making our case the second case of giant FGP.

The diagnosis of FGPs is based on pathology. The presence of cystically dilated fundic glands that are lined by attenuated, but otherwise normal-appearing chief and parietal cells is characteristic. The overlying foveolae are usually shortened. Inflammatory changes in the surrounding mucosa are usually absent[3]. In our patient, the surrounding mucosa was involved by an H pylori-positive mild chronic active gastritis. This association between sporadic FGPs and H pylori gastritis has been rarely reported. It seems like patients with sporadic FGPs are largely protected from H pylori colonization and that these patients rarely acquire the infection after the regression of the polyps[12].

Sporadic FGPs have distinct endoscopic features[13]. They are confined to the acid secreting oxyntic mucosa of the gastric fundus and gastric body. They are small, sessile, smooth-surfaced, hemispherical or dome-shaped, and similar in color to the surrounding mucosa. The role of EUS in the evaluation of gastric mucosal and sub-mucosal lesions is well established. However, its use in the evaluation of giant gastric polyps has been described in four cases only[7-9,14]. It may be helpful in defining the depth and the extension of the lesion through the layers of the gastric wall, ruling out a possible malignancy.

The natural history of FGPs is unclear and there are no guidelines for surveillance and treatment. The number and size of FGPs in the FAP and sporadic forms can slowly increase, decrease or remain the same[3]. Since forceps biopsy sampling may fail to provide adequate tissue for histological diagnosis, it is recommended to remove all gastric polyps larger than 5 mm in diameter[15]. Whether this recommendation applies to FGPs is still unclear. Endoscopic mucosal resection (EMR) seems to be a safe and fast procedure for the diagnosis and treatment of gastric polypoid lesions[16]. However, a very high bleeding rate of 32% may complicate EMR for polyps greater than 3 cm in size[17]. Moreover, surgical resection (partial gastrectomy) of large polyps may be associated with serious acute and chronic complications[18].

In our patient, the polyp is most likely the cause of positive stool occult blood. The question whether to remove such a giant polyp by EMR or surgical resection or to observe is debatable. We opted for surveillance of the polyp for the following reasons: The patient is asymptomatic and his hemogram normalized on iron therapy; FGPs may regress, progress or remain unchanged in size, FGPs carry no malignant potential, and finally endoscopic or surgical resection of such a polyp carries a high risk of bleeding and complications respectively. We felt that keeping this large polyp imposes a negligible risk to the patient.