Inflammatory bowel diseases (IBD) are a heterogeneous group of diseases, not always easy to diagnose, even more difficult to classify, and diagnostic criteria are not always uniform. Well done population-based studies are not abundant, and so comparisons among different geographical areas or populations are not always very reliable. In this article, we have reviewed epidemiological studies available on the world’s population while making a critical review of published data. 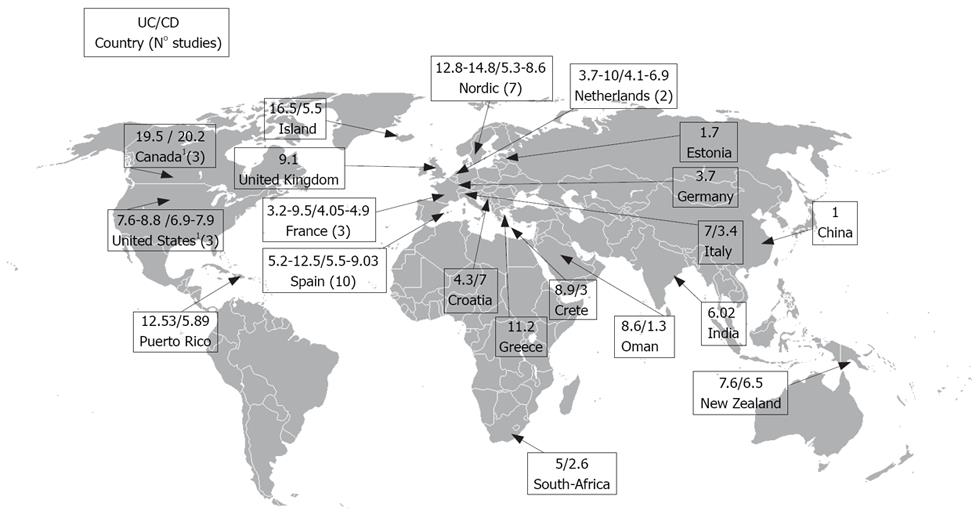 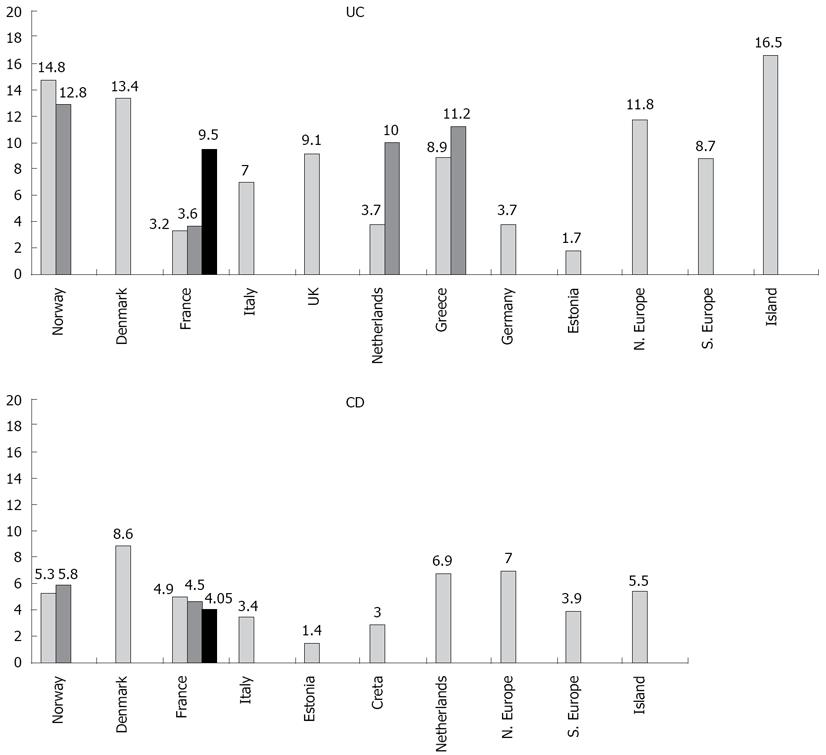 Figure 2 UC and CD incidence in prospective and poblational. European studies excepting Spain. Different color means there is more than one study in the same country and goes in chronological order from the first published study to the last. 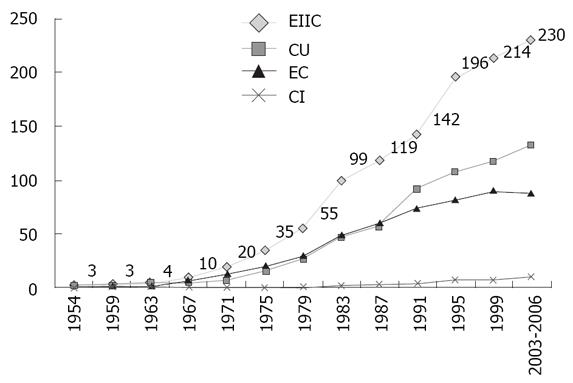 There is no doubt about the key role of epidemiology in modern medicine. The burden of inflammatory bowel diseases (IBDs) is changing so quickly, and shows such geographical heterogeneity, that the challenge for epidemiologists is a formidable one. The main goal of this review is to furnish a panorama of these studies all over the world.

First, we have to underline some methodological difficulties. IBDs are a heterogeneous group of diseases, not always easy to diagnose, even more difficult to classify, and diagnostic criteria are not always uniform. And we can not forget that in many countries IBD were rare only 30 years ago. In these stages, hospital based studies are rather common, but of course with many bias. Well done population-based studies are not abundant, and so comparisons among different geographical areas or populations are not always very reliable. The heterogeneity of genotypes and phenotypes has been confirmed in the most recent reports. So, sound studies should be based on clear definitions and internationally accepted classification. Otherwise, some common misconceptions will be perpetuated.

For instance, it is common to find in the introduction of epidemiological reports these type of sentences: “One of the few aspects of the epidemiology of inflammatory bowel disease that seems indisputable is the emergence of both ulcerative colitis and Crohn’s disease in the economically developed nations of Western Europe and North America during the past century”[1] or “It has been suggested that the incidence of inflammatory bowel disease (IBD), which includes Ulcerative colitis and Crohn’s disease, is three or more times higher in Northern than in Southern Europe”[2]. It is the widespread idea that incidence of this group of diseases is low in Africa and Asia, as opposed to the more developed countries, particularly in Northern Europe and Central and North-America. However, other authors are critical with the geographical difference theory and try to clarify the concept: “The incidence figures for Ulcerative colitis and Crohn’s disease have been difficult to interpret, and geographical variations may be due to differences in classification criteria and study design.”[3]

We can see in Figure 1, how epidemiological studies published so far with high quality in methodology (clear definitions, prospective, population-based), are mostly grouped in the same areas[2,4-45] while in areas considered low incidence, coinciding with areas of low socio-economic level, there are no relevant studies. In most undeveloped countries there are few epidemiological studies and the few published until now are limited to very specific areas for a centralized hospital and often retrospectively. The authors of these reports emphasize the probable bias of their results[46].

In Asia, there is only 1 prospective study in Hong Kong[41] and 4 retrospective studies in Japan[47], Singapore[48] and Korea[46,49]. Just one study in India[42] and another one in the Arabian Peninsula, in Oman[43]. Studies of Israel are included in Europe. In Africa, data arrive from Cape Town[44]. Recently, a study conducted in New Zealand[45] describes incidence rates similar to those described in “developed” countries or “Northern Europe”.

In the United States, where the health system is not ideal for conducting population studies because 45 million inhabitants are not covered by a health care system, the available studies, though retrospective, are based on the implementation of a “population-based data base of inflammatory bowel disease” which allows the identification of these diseases with a high sensitivity and specificity with the advantage of results over extensive periods of time[7-9]. In Canada it is been used the same methodology for collecting data[4-6].

After all, the general data are not very consistent, so it is difficult to make comparisons. In this article, we have reviewed epidemiological studies available on the world's population while making a critical review of published data.

We show in Table 1 a summary of retrospective studies published until now[4-9,46-92] and the different rates of incidence: as you can see, many of the them are hospital-based[47,48,54,64,77,88,90], not surprisingly showing a worse clinical course with increased morbidity. Population-based studies demonstrate that at least 50% of patients do not require hospital admission, so hospital-based studies are clearly biased showing only the most severe group of patients. We would like to note also that incidence rates are highly variable even in the same geographical areas (for example in UK, incidence varies from 7.1 to 15 for UC)[52,53], a fact explained by methodological heterogeneity.

The results of prospective studies (Figure 1) show much more homogeneity. However, there are high incidence areas such as Iceland[11] and Puerto Rico[10] and very low incidence areas such as China[41] and Oman[43]. The other studies do show intermediate rates and, in general the more recent the study the higher the incidence rates[12,20,27]. In most prospective studies, the incidence rates are higher for UC than for CD; only in the Croatian study[39] this ratio is reversed, as is found also in pediatric studies. In Canadian reports incidence rate of UC and CD tend to equalize[4-6], reflecting the high incidence of CD in this country.

VARIATIONS IN INCIDENCE OVER TIME

The general observations in northern Europe and America show that incidence of UC increased substantially in the early and middle third of 1900’s, without changes afterwards, while the incidence of CD has been rising since the mid-1900s[5]. In Western world, it has been a clear increase in incidence in both CD and UC during the sixties and seventies after reaching a plateau between 7 and 12 new cases/100 000 habitants per year, respectively. Nowadays, rates tend to stabilize in areas of high incidence as in northern Europe and America, while in areas with low incidence as southern Europe, Asia and developing countries[93] these incidence dada keep raising.

However, the truth is that we do have little reliable data to establish these comparisons. Few studies are repeated in the same areas and with the same diagnosed criteria or at different consecutive periods or long-term monitoring. In many cases, rates come indirectly from studies with records of hospital admissions and mortality studies. Moreover no less than 12% of patients diagnosed of UC have to be reclassified, as it has been described in some studies[3]. In Figures 3 and 4 we show the studies in the same areas at different periods of time describing differences in incidence rates over time.

In Canada and the United States, and although we have already commented that the methodology is retrospective, data collection of incident cases is comprehensive and based on a database created specifically to collect all incident cases of inflammatory bowel disease; the advantage of these studies is to be able to observe how incidence of these diseases varies over time because data are collected using the same methodology and results are easily comparable. The American Group has published 3 studies[7-9] analyzing the incidence of UC and CD between 1940 and 2000, describing a progressive increase since 1940 in both diseases, afterwards their data remain stable about 30 years, and later on, incidence starts increasing again mainly with CD (increase of 31%) since 1991 remaining UC incidence stable and even declining (7%). The Canadian group has also published 3 studies[4-6] showing the higher incidence of CD never published and described since 1987, remaining stable since then until now; the incidence rates of UC are also high, but similar to other European countries (Iceland, Denmark) and also remains stable.

Analyzing the evolution of incidence rates in European countries we can see that in most of them both rates of UC and CD have been increasing over the years. In relation to UC, we see how the population studies conducted in France[18-20], Greece[34-36] and Netherlands[32,33] show a gradual increase over time; in Norway remains stable and even “declining” but with very high levels (14.8-13.6/100 000 inhabitants per year). In relation to CD, we can see analogous evolution as UC except in France where this trend seems to be the opposite, but with little difference between the studies (4.9-4.05/100 000 habitants per year).

In Spain, we can see how incidence of UC increases gradually with the only exception of one study[29] and also, we can see how clearly CD incidence has increased progressively since 1978 in which the first prospective and population study of CD[22] was conducted in our country with rates of 0.5 patients/100 000 habit per year. The 2 studies conducted more recently in Spain, show really high incidence rates of both UC and CD: Arin et al[28] in Navarra observed an incidence between 2001 and 2003 from UC and EC of 9.57 and 585 patients/100 000 habit per year respectively; the Asturian study (Figure 5), with a long-term follow-up (historical cohort from 1954 until December 2006)[27] noted how since 1954 incident cases of IBD have been gradually increasing, with two points of inflection in the 80’s and in 1991. The first coincides with the introduction of endoscopy in our hospitals as a diagnostic method and the second coincides with the beginning of the prospective study. You can see a clear increase of incidence in the second period of the study, but these results may be biased, since in the first period, the data are retrospective. Finally, in prospective study (1991-2006) there are no significant differences in incidence rates (P = 0.08).

The geographical variability is, in part, the consequence of differences in methods and diagnostic resources. However, when sequential and reliable data are available from the same area, incidence rates do really change.

The rather quick change of incidence does strongly suggest that environmental factors have a clear etiological role in IBDs. The factor (or factors) has something in common with economical development: those diseases seem to raise in parallel with per capita income[94].

New, methodologically sound studies are needed. We need transversal studies, but longitudinal ones with long-term follow-up will be probably more important to reveal new clues for etiological investigation.