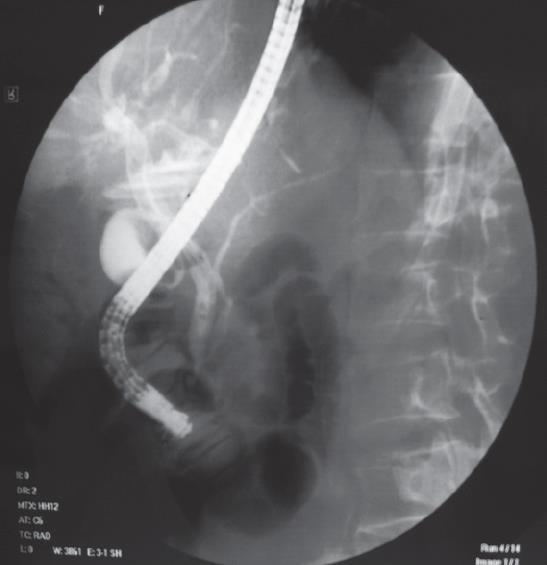 Figure 1 ERCP image revealing the dilated biliary tract with a tubular filling defect in the common bile duct until the junction of right and left hepatic ducts. 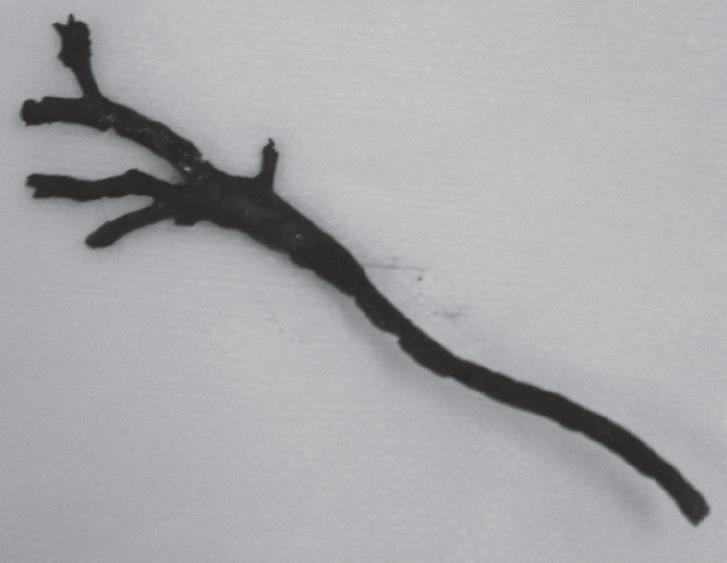 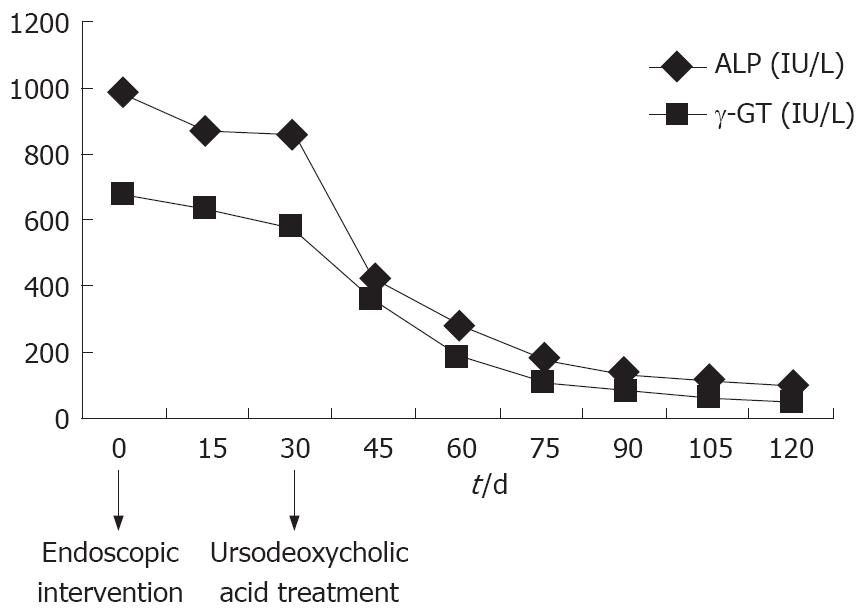 Though uncommon, biliary casts are most frequently described in liver transplant patients[1-4]. The etiology of cast development is not fully known, but it is likely to be multifactorial with biliary sludge being a prerequisite for cast formation. Bile duct damage and ischemia, hemolysis, cholangitis, fasting, total parenteral nutrition (TPN) and recent surgery are thought to be implicated in cast, pathogenesis via sludge development[3,4].

We describe a diabetic man who developed a biliary cast after cholecystectomy. The patient underwent endoscopic retrograde cholangiopancreatography (ERCP) with extraction of an extrahepatic biliary cast. But, his cholestasis remained unchanged. Oral administration of ursodeoxycholic acid (UDCA) resulted in normalization of liver function tests.

Abdominal ultrasound and computed tomography demonstrated biliary tract dilatation without apparent lesion. At ERCP, a common bile duct tubular filling defect was found (Figure 1). Endoscopic sphincterotomy was performed, followed by basket retrieval of a cast of extrahepatic biliary tract (Figure 2). No residual cast in the visualized intrahepatic bile ducts was demonstrated. Cholangitis resolved, but cholestasis remained unchanged in the next month. UDCA (750 mg/d) was administered and a gradual improvement in cholestasis was observed with normalization of cholestatic enzymes after a 3-mo treatment period (Figure 3). After a 6-mo treatment period, a repeated ERCP showed a normal biliary tract. The patient’s condition was excellent with normal liver function tests 6 mo after cessation of UDCA treatment when we wrote this paper.

The biliary cast syndrome describes the presence of casts causing obstruction with its resultant sequelae of biliary infection, hepatocyte damage secondary to bile stasis and ductal damage, all contributing to cholangiopathy. The diagnosis is suspected in liver-transplant patients presenting with abnormal liver-associated enzymes of a cholestatic pattern, evidence of ductal dilatation on abdominal imaging studies or clinical evidence of obstruction, such as cholangitis or jaundice[1-4] and is usually confirmed by ERCP.

To the best of our knowledge, there are only three reports of a total biliary cast in the non-transplant situation. D’Haens et al[5] described an elderly lady with extensive cast formation that developed after initial recovery from emergency cholecystectomy. Despite multiple attempts at endoscopic removal, post-mortem findings confirmed the presence of diffuse bile casts and acute suppurative cholangitis. The authors suggest that, in the absence of a gallbladder, the increased bile pigment load may have initiated biliary cast formation. In the second report, Byrne et al[6] described a patient with a history of traumatic head injury requiring admission to the intensive care unit, who developed a biliary cast. Despite endoscopic and surgical attempts at cast removal from large bile ducts, liver transplantation was ultimately performed for biliary cast formation. In a recent report, Gleeson et al[7] described 2 patients with biliary cast syndrome in a non liver transplant setting. In the first case, biliary cast syndrome developed in a patient with no preexisting liver pathology. But, probably hepatic infarction induced by antiphospholipid antibody syndrome triggered the ischemic event leading to extrahepatic cast formation. In the second case, the etiology of cast formation was multifactorial, including fasting-related gallbladder hypocontractility, parenteral nutrition, biliary infection and possible ischemia due to hypotension-induced sepsis.

Biochemical analysis of biliary casts in liver-transplant patients showed that bilirubin seemed to be the main component (10%-50%) of casts and comprised conjugated free and oxidized varieties. Bile acids comprised 10%-15% of the cast sample and cholesterol represented about 5%-10%[4]. The chemical composition of biliary casts in non-transplant patients is unknown due to its rarity. However, in both reported non-transplant patients[5,6] and in our case, the biliary cast developed after difficult abdominal surgery in two patients, and severe head injury in one patient. They all had a long postoperative course with TPN. Our patient had similar characteristics (fasting, parenteral nutrition, biliary infection) with the second patient in Gleeson et al’s report[7], while the underlying mechanism of biliary cast syndrome in the first patient was hepatic ischemia due to antiphospholipid antibody syndrome. The similarities and differences of all reported non transplant patients with biliary cast syndrome underscore its multifactorial pathogenesis. It is known that sick patients, particularly abdominal surgical and neurosurgical patients, in intensive care units have been shown to develop biliary sludge frequently and rapidly[8,9]. Fasting promotes gallbladder hypocontractility due to insufficient secretion of cholecystokinin and may, in part, explain the abdominal surgical patient group preference[8,9]. Other risk factors for sludge formation include TPN, pregnancy and acquired immunodeficiency syndrome[10,11].

The persistent cholestasis of our patient, despite removal of the extrahepatic biliary cast, is explained by the fact that development of cast was extensive and included the small intrahepatic ducts resulting in obstructive cholangiopathy. It is known that prolonged obstruction of the intra-and/or extrahepatic biliary tree due to stones or sludge, predisposes to caliber irregularities of the biliary system and also toxic effects of bile on hepatocytes with cholangitis further to contribute to cholestatic liver damage[10].

We suppose that the mechanism by which the UDCA resolved our patient’s cholestasis is the dissolution of biliary cast of small intrahepatic bile ducts because its main component is cholesterol. The presence of diabetes associated with a high level of cholesterol and combined with long-postoperative TPN contributes to hypersaturation of bile with cholesterol, and initiates biliary cast formation. Stone or sludge dissolution by UDCA is a complex physiochemical process, affecting mainly the cholesterol and phospholipid ionophase and enhancing cholesterol solubilization[12,13]. It would be interesting if chromatography had been performed to reveal the components of our patient’s biliary cast and confirm our hypothesis.

The beneficial effect of UDCA on biliary cast-associated cholestatic liver damage may be related to its hepatocytoprotective action, improvement in biliary acid secretion and immunomodulatory properties which reduce immune-related liver damage[14,15]. Mechanisms underlying the beneficial therapeutic effects of UDCA on cholestatic liver diseases include: (1) protection of injured cholangiocytes against toxic effects of bile acids, (2) stimulation of impaired biliary secretion, (3) stimulation of detoxification of hydrophobic bile acids, and (4) inhibition of apoptosis of hepatocytes. However, it is not clear which of these mechanisms by which UDCA exerts its beneficial effects on cholestatic liver diseases. Most likely, such effects depend on the specific cholestatic liver disease and its stage[16]. Knowing that biliary infection, bile duct damage and ischemia, fasting, hemolysis and abdominal surgery are all factors that may be implicated in biliary cast syndrome[17], it would be interesting to use UDCA as a prophylactic in patients at risk of developing biliary cast syndrome. However, the rarity of this complication makes such a study practically impossible.

In conclusion, administration of UDCA, if cholestasis remains unchanged after endoscopic removal of extrahepatic biliary cast, is a very promising treatment modality for biliary cast syndrome.