AIM: To investigate the effects of ketamine anesthesia on the motility alterations and tissue injury caused by ischemia/reperfusion in rats.

METHODS: Thirty male Wistar rats weighing 200-250 g were used. Ischemia was induced by obstructing blood flow in 25% of the total small intestinal length (ileum) with a vascular clamp for 45 min, after which either 60 min or 24 h of reperfusion was allowed. Rats were either anesthetized with pentobarbital sodium (50 mg/kg) or ketamine (100 mg/kg). Control groups received sham surgery. After 60 min of reperfusion, the intestine was examined for morphological alterations, and after 24 h intestinal basic electrical rhythm (BER) frequency was calculated, and intestinal transit determined in all groups.

CONCLUSION: Our results show that ketamine anesthesia is associated with diminished intestinal injury and abolishes the intestinal transit delay induced by ischemia/reperfusion.

Figure 1 A: Control A group showing normal mucosa; B: SK A. Changes in intestinal mucosa structure following 45 min of ischemia and 60 min reperfusion; C: KET A. Less damage was observed (all × 40). 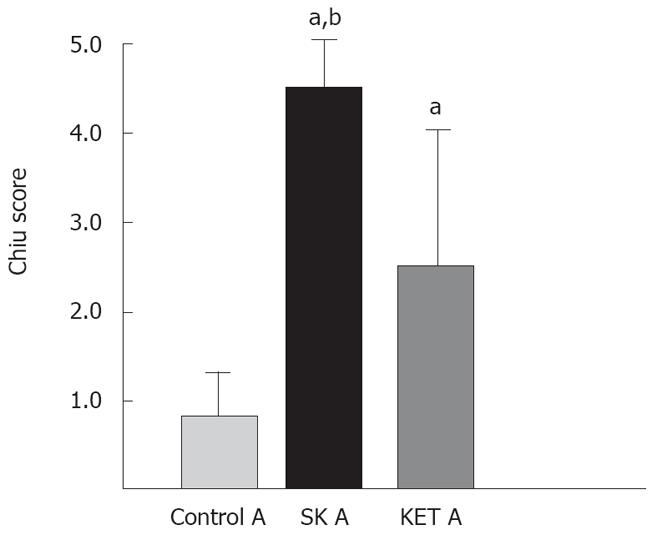 Figure 2 Bar diagram illustrating the Chiu score of mucosal injury after 60 min of reperfusion. Lower damage score was observed in a KET A group than in the SK A group. aP < 0.0001 vs control A; bP < 0.0001 vs KET A. 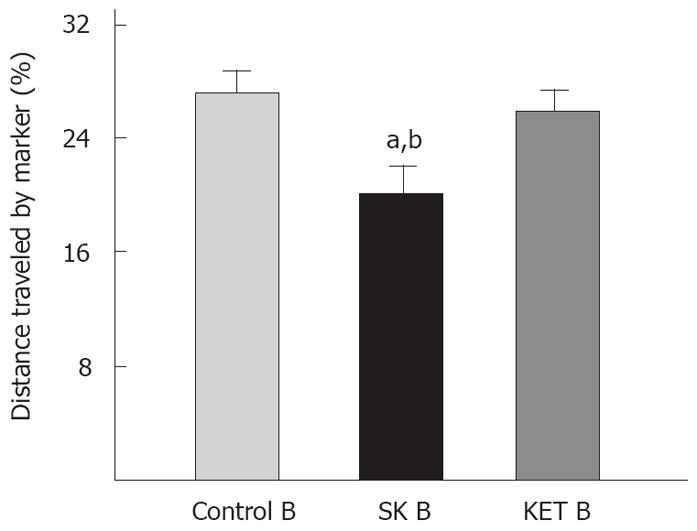 Figure 3 Bar diagram illustrating the distance travelled by the marker, expressed as a percentage of total intestinal length from pylorus to cecum. Intestinal I/R caused transit delay that was corrected by the administration of ketamine as anesthetic. aP = 0.00019 vs control B; bP = 0.0004 vs KET B.

Mesenteric ischemia is a clinical entity with a mortality rate between 60% and 100% that usually requires surgical resection of the necrotic intestinal segment[1]. Although there have been advancements in the treatment of ischemic injury, an ideal treatment has not been defined, and new options should be considered. A promising strategy is the use of anesthetic and sedative agents that might exert protective effects on the injured tissue. Ketamine is an agent that has been recommended for this purpose in clinical situations of sepsis, renal ischemia, cerebral ischemia and serious burn injuries[2-4].

The NMDA (N-methyl-D-Aspartate) receptor family is a heterogeneous group of excitatory ionotropic voltage and ligand gate dependent receptors. Ketamine is a parenteral anesthetic that non-competitively blocks the NMDA receptor[9]. It has been shown that ketamine protects various tissues from I/R injury, such as brain[10], myocardium[11] and skeletal muscle[12]. To the best of our knowledge, no previous studies have evaluated the effects of ketamine on intestinal motility impairment and tissue damage induced by I/R.

Animal procedures were performed in accordance with the proper use and care of laboratory animals. Experiments were performed on 30 male Wistar rats weighing 200-250 g. Animals were maintained under standard conditions, such as stable room temperature (24 ± 3°C), a 12 h light/12 h dark cycle, and access to commercial rat pellets and water ad libitum.

Briefly, after anesthesia with pentobarbital sodium (Anestesal, Pfizer Inc, Mexico) or ketamine (Anesket, Pisa Agropecuaria, Hidalgo, Mexico), midline laparotomy was performed, and the small intestine was externalized and kept wrapped in humid sterile gauze to prevent dehydration. Rats were placed over a heating mat to maintain constant core temperature (37°C). Intestinal I/R was induced by selective clamping of the vascular supply of an ileum segment consisting of 25% of the total intestinal length with microvascular clamps for 45 min (ischemia) followed by either 60 min or 24 h reperfusion. Ischemia was confirmed by absence of pulsations as well as characteristic changes in intestinal coloration.

Thirty male Wistar rats were randomized into 3 groups (n = 10) depending on the type of anesthetic used. Each group was then divided into 2 subgroups. In subgroup A (n = 5), reperfusion lasted 60 min, and tissue was obtained for histological examination only, while in subgroup B (n = 5) it was extended to 24 h and the animals used to evaluate intestinal transit and intestinal electrical activity.

In subgroup B, after 24 h of reperfusion, animals were anesthetized with pentobarbital sodium (50 mg/kg), mid line laparotomy was performed, and 3 subserosal bipolar electrodes were used to record the electrical activity of the ileum segment that had been subjected to I/R injury using a Power Lab 4/20T (ADInstruments, USA) equipped with 3 DC pre-amplifiers (ADInstruments, USA) to analyze and calculate intestinal Basic Electrical Rhythm (BER). Immediately after 30 min, 2 mL/kg of a non-absorbable charcoal solution marker was instilled through a canula into the proximal end of the ileum segment studied, and after another 30 min the intestine was removed, and the distance traveled by the marker was registered. The distance traveled by a marker was then expressed as percentage of total intestinal length from pylorus to cecum. This was used as an indicator of intestinal transit. Finally, tissue samples were obtained for morphologic examination.

After the I/R procedure, rats were sacrificed by exsanguination from the aorta. Immediately, tissue samples were obtained and fixed in 10% neutral buffered formalin and embedded in paraffin, then 5 micrometer-thick sections were stained with hematoxylin and eosin and examined under light microscope by a blinded pathologist. The Chiu scale[13] of mucosal injury was used to evaluate the degree of histological alteration on 10 sections of 1 mm each to complete 1 cm per animal and then averaged. The scale consists of values from 0 to 5, where 0 normal mucosa; 1, development of sub epithelial (Gruenhagen’s) spaces; 2, extension of the sub epithelial space with moderate epithelial lifting from the lamina propria; 3, extensive epithelial lifting with occasional denuded villi tips; 4, denuded villi with exposed lamina propria and dilated capillaries; and 5, disintegration of the lamina propria, hemorrhage, and ulceration.

Data were analyzed with SPSS 11.0 (SPSS Inc. Software, Chicago, Illinois, USA) statistical software using one-way analysis of variance (ANOVA) and with Tukey-Kramer test so as to determine comparison between groups, and differences between groups, respectively. All values were expressed as mean ± SD and P < 0.05 was considered statistically significant.

Structural changes in intestinal mucosa in rats of group KET A (ketamine anesthesia) showed moderate alteration such as epithelial lifting, while ulceration, hemorrhage and villi disintegration was observed in rats of group SK A after 45 min of ischemia and 60 min of reperfusion (Figure 1). The results of the quantitative evaluation of structural damage using the Chiu scale were as follows: control A 0.7 ± 0.45, SK A 4.58 ± 0.50 and KET A 2.35 ± 1.14 (Figure 2). Damage in group KET A was significantly reduced in comparison with group SK A (P < 0.0001). However, the damage score in the KET A group did not reach control A group levels, indicating only moderate protection. The degree of mucosal damage after 24 h of reperfusion (subgroups KET B and SK B) was the same as in control rats and showed no statistical significance.

The distance traveled by the marker, expressed as percentage of total intestinal length, in subgroup SK B was 20% ± 2% in comparison with subgroup KET B 25.9% ± 1.64%. In the control B group, the distance traveled was 27% ± 1.4% (Figure 3). Intestinal transit showed statistically significant delay in the SK subgroup compared with the other groups in this study (P = 0.0004). Group KET B showed no significant alteration in transit speed compared to the control B group. The frequency of the BER was not statistically different between any of the groups after 24 h reperfusion: Control B 11.5 ± 1.1/min; SK B 11.2 ± 0.5/min; KET B 11.75 ± 0.95/min.

The structural damage caused by ischemia is aggravated by the restitution of blood flow. The physiopathology of intestinal mucosal damage by I/R is not completely understood. But, it is believed that cytotoxic substances such as free radicals, nitric oxide, serotonin, complement, as well as neutrophil infiltration and nuclear transcription factors play important roles[18]. Macrophages have been also implicated in the initial damage caused by intestinal I/R[19]. I/R has also been shown to induce apoptosis[20]. Bacterial translocation and mucosal barrier dysfunction have been implicated in the damage caused by I/R in the gut[21]. This damage is also related to an increase in circulating levels of pro-inflammatory cytokines such as interleukin-6 and tumor necrosis factor alpha (TNF-alpha), liberated by the intestine itself[22].

Recently, anti-inflammatory properties of ketamine have been described in various experimental models. Interleukin-1, 6, 8 and TNF-alpha levels are reduced after the administration of ketamine[23-25]. Neutrophil adhesion, migration, and free radical release is inhibited by ketamine[26,27], as is nitric oxide production by macrophages[28]. Further studies are needed to determine whether one of these effects is responsible for the mucosal protection against I/R that we observed in this study.

Glutamate is an excitatory neurotransmitter in the central nervous system, and it participates in the modulation of intestinal function through the enteric nervous system, where NMDA receptors have been found[29]. It has been shown that the glutamate system is involved in the pathogenesis of I/R in brain and intestine[30]. Glutamate release and NMDA receptor activation induces nitric oxide, and other free radicals that cause tissue injury[31]. Glutamate release during I/R could also cause toxicity in the enteric nervous system, which could cause motility alterations[32]. One recent study found that intestinal I/R causes myenteric plexus ganglion cell reduction and death[33]. This suggests that the NMDA receptor could be related to the functional alterations induced in the intestine by I/R. In one study, the NMDA antagonist MK-801 diminished nitric oxide production, and prevented the changes in the intestinal transit caused by intestinal ischemia/reperfusion[34]. We showed that ketamine, an NMDA receptor antagonist, also corrects the intestinal transit delay caused by intestinal I/R, but we did not find any changes in the frequency of the BER after 24 h of reperfusion. Further studies are needed in order to determine whether our results are explained by ketamine acting as an NMDA receptor antagonist in the gut.

Ketamine protects the intestine against other types of non-ischemic insults. Ketamine has been shown to protect the gut against endotoxemia induced injury in rats through diminished pro-inflammatory cytokine release[35]. Ketamine also decreased enterocyte apoptosis in a model of thermal burn induced intestinal injury[36]. However, this is the first study to demonstrate that ketamine anesthesia reduces I/R induced injury in intestinal mucosa.

In intestinal diseases associated with ischemia and reperfusion, intestinal tissue is damaged and intestinal function is altered. In this study, the aim was to investigate the effects of ketamine anesthesia in rats in which intestinal ischemia/reperfusion was induced.

The authors suggest that ketamine anesthesia may have beneficial effects that prevent the tissue damage and functional alterations that follow from intestinal ischemia/reperfusion.

This study is the first to show that ketamine anesthesia can reduce the intestinal tissue damage induced by ischemia reperfusion.

Ketamine should be further studied and the possibility of using ketamine as anesthetic in cases of intestinal ischemia should be considered.