Signal transducers and activators of transcription 3 (STAT3) play an important role in various autoimmune disorders including inflammatory bowel disease (IBD). Recent studies have revealed that STAT3 activation plays distinctly different roles between innate immune responses and acquired immune responses in colitis. STAT3-mediated activation of acquired immune responses plays a pathogenic role in colitis by enhancing the survival of pathogenic T cells. In contrast, STAT3-mediated activation of innate responses contributes to the suppression of colitis. This review will summarize the current understanding of the roles of STAT3 in IBD and the potential of targeting STAT3 for the treatment of IBD, emphasizing recent observations. 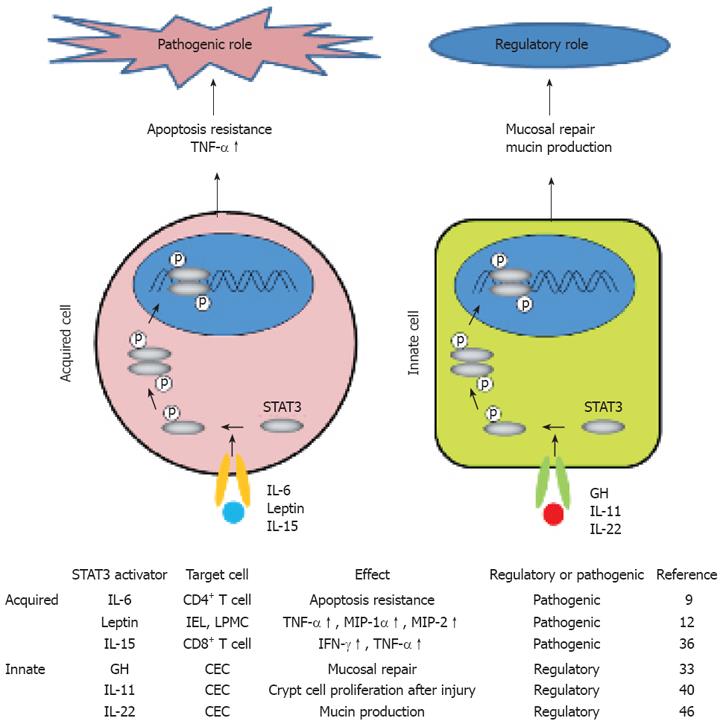 Figure 1 STAT3 plays distinct roles between innate immune cells and acquired immune cells. STAT3-mediated activation of acquired immune responses plays a pathogenic role in colitis by enhancing survival of pathogenic T cells and by inducing TNF-α. In contrast, STAT3-mediated activation of innate responses contributes to the suppression of colitis by enhancing the mucosal repair and by inducing mucin production.

Inflammatory bowel disease (IBD) is a group of idiopathic chronic relapsing immune-mediated inflammatory disorders, which is characterized by two major forms of intestinal inflammation: ulcerative colitis (UC) and Crohn’s disease (CD)[1]. Although the precise mechanisms of the pathogenesis of IBD still remain unclear, accumulating studies have shown that multiple cytokines, including interleukins (ILs) and interferons, are involved in the pathogenesis of IBD[2,3]. Most of these cytokines activate various members of a family of cytoplasmic transcription factors such as signal transducers and activators of transcription (STATs)[4,5]. Indeed, several recent studies have focused on the role of STATs on IBD. Among STATs, the role of STAT3 in IBD has been most well documented by recent studies obtained from human IBD studies[6-8] and experimental IBD models[9-12]. These studies have revealed that STAT3 is in a unique position for pathogenesis of IBD, because STAT3 plays distinct roles between innate immune cells and acquired immune cells. This review will focus on the roles of STAT3 in IBD from a different point of view, namely, innate immune systems versus acquired immune systems.

STAT3 was initially identified as an acute phase response factor, an inducible DNA binding protein that binds to the IL-6 responsive element within the promoters of hepatic acute phase protein genes[13]. Subsequent studies indicate that STAT3 becomes activated in response to a wide variety of cytokines and growth factors[4,5,14]. After ligation of their specific receptors by these cytokines and growth factors, STAT3 is immediately phosphorylated, resulting in their dimerization and migration to the nucleus to induce several gene expressions encoding molecules that play a role in a variety of biological functions such as cell growth, anti- and pro-apoptosis, cell motility, negative feedback loop (suppression of cytokine productions), regulatory cytokine production and anti-bacterial activity depending on cell types[4,5,14-17].

Although the role of STAT3 activation in the pathogenesis of IBD is still not very clear, the expression and activation of STAT3 protein in the mucosa of human IBD patients has been well studied. Lovato et al demonstrated constitutive activation of STAT3 in five out of seven CD patients in a small case series[6]. Musso et al demonstrated that STAT3 activation was confined to actively inflamed colons from not only CD, but also UC patients[7]. Accordingly, activated STAT3 was detected in isolated lamina propria mononuclear cells from inflamed IBD tissues, but not in peripheral blood mononuclear cells from control subjects or IBD patients. In this study, immunofluorescence demonstrated that the sources of activated STAT3 were macrophages and T lymphocytes, but not neutrophils. Mudter et al also showed that an increased amount of total STAT3 protein appeared in both UC and CD compared to noninflammatory control cells, and total STAT3 correlated with increased activated pSTAT3 in tissue sections from both UC and CD[8]. They also showed that increased pSTAT3 also directly correlated with the histological degree of inflammation of tissues. Importantly, this activation is observed in both acquired cells such as T cells and innate cells such as colonic epithelial cells (CECs).

THE ROLE OF STAT3 ON ACQUIRED IMMUNE CELLS IN IBD

THE ROLE OF STAT3 ON INNATE IMMUNE CELLS IN IBD

Dysregulated host/microbial interactions have been postulated to play a crucial role in the development of IBD by inducing uncontrolled activation of acquired immune responses[24,28-30]. Innate immune responses mediated by CECs and phagocytic cells such as macrophages play a crucial role in the initial defense to maintain the appropriate host/microbial interactions[15,22]. Accumulating studies have demonstrated that several mechanisms are involved in the maintenance and/or enhancement of the barrier function by CECs[15,31,32]. Among these mechanisms, activation of STAT3 is considered to be an important pathway that can enhance and maintain not only the barrier function of epithelial cells, but also the activation of macrophage[15,22]. Indeed, disruption of innate immune responses by genetically engineered either inactivation of STAT3 cascade in the CECs, or else macrophages induce intestinal inflammation[15,21-23]. This observation is further supported by a recent study using a conditional STAT3 knockout mouse strain in which STAT3 deletion is induced during the adult life[23]. This mouse strain shows efficient elimination of STAT3 protein in innate cells (macrophages and CECs), but not acquired cells (T and B cells), and develops a lethal colitis immediately after the deletion of STAT3 in the adult life. These findings indicate that, in contrast to acquired immune cells, activation of STAT3 in innate cells plays a regulatory role in colitis. Interestingly, inactivation of STAT3 in both CECs and macrophages results in lethal damage[18,23], whereas such fatal inflammation is not observed in mice in which the inactivation is specifically induced in either CECs or macrophages[15,22]. This raises a possibility that transient inactivation of STAT3 in both CEC and macrophage may cause lethal damage.

THE ROLE OF STAT3-ACTIVATORS ON IBD

In contrast, GH and IL-11, both of which activate STAT3 predominantly in CECs, contribute to the suppression of experimental colitis[33-35]. Of note, human trials utilizing GH, IL-11 and anti-IL-6R mAb have been conducted and have shown that the strategies using these products are beneficial to IBD patients[38-40] (Figure 1).

IL-22 has recently been shown to be preferentially expressed by the Th17 subset[41,42] and has been demonstrated as a strong activator of STAT3[43-45]. Recently, we have demonstrated that IL-22 contributes to rapid amelioration of local inflammation associated with a Th2-mediated colitis through activation of STAT3 in CECs[46] (Figure 1). Since IL-22 specifically targets innate immune pathways[16,45-47], selective activation of STAT3 in CECs, but not acquired immune cells by IL-22 may contribute to amelioration or chronic Th2-mediated colitis.

These findings suggest that it is possible to activate or inactivate STAT3 in specific cell populations for the treatment of human IBD.

THE ROLE OF MOLECULES INDUCED BY STAT3 ON IBD

STAT3 has been shown to induce anti-apoptotic genes such as bcl-2 and bcl-xl in T cells, and increase to resistance of lamina propria pathogenic T cells to apoptosis[9]. In contrast, STAT3 can induce several molecules involved in the regulation of inflammation in CECs. Recent studies have demonstrated that STAT3 is required for the induction of IL-10, a well-known regulatory cytokine that is involved in the suppression of several inflammatory processes[48] including experimental colitis[15,49,50]. Local, but not systemic administration of this cytokine is of benefit in human IBD[51,52]. Impaired IL-10 production in macrophage by the STAT3 deletion is involved in the development of colitis[15], and enhanced production of this cytokine by CEC contributes to the suppression of colitis[53]. Importantly, IL-22, a strong activator of STAT3, has been shown to induce IL-10 production by CEC lines[45]. In addition to IL-10, STAT3 activation can also induce the expression of suppressors of cytokine signaling (SOCS) 3 that has been shown to play an important role in the suppression of acute colitis[11,17]. Furthermore, STAT3 has been recently demonstrated to induce trefoil factors that regulate intestinal epithelial homeostasis[22]. Moreover, IL-22-mediated STAT3 activation contributes to the improvement of colitis-associated mucus layer destruction associated with goblet cell depletion by enhancing the production of membrane-bound mucins (MUC1, -3, -10, and -13)[46]. Membrane-bound mucins form a static external barrier at the epithelial surface and are stored in goblet cell vacuoles[54-56]. Therefore, our recent study suggests that the enhanced mucus barrier formation participates in the IL-22/STAT3-mediated attenuation of Th2-mediated colitis[46].

Recent data indicate that STAT3 is one of the crucial targets for the treatment of IBD. However, as the receptors of these cytokines and growth factors are present on both innate and acquired cells, activation of STAT3 is likely to occur in both cell types[5,14,34-36,57,58]. Therefore, as the function of STAT3 is a double-edged sword, careful attention should be directed toward the cell population that is being targeted when one contemplates STAT3 inhibition or activation in human IBD[59].