A number of techniques have been described to remove rectal foreign bodies. In this report, a novel endoscopic technique using a pneumatic dilatation balloon normally used in achalasia patients is presented. In addition, a systematic review of the literature was performed for non-operative methods to remove foreign bodies from the rectum. These results are summarised, presented as a practical at-a-glance overview and a flow chart is offered to guide the clinician in treatment decisions. The design of the flow chart was based on the aims to treat the patient preferably on an outpatient basis with minimally invasive techniques and if possible under conscious sedation rather than general anaesthesia.

Intentional or unintentional insertion of rectal foreign bodies is not uncommon and often poses a serious challenge on the clinician. Objects can be inserted for diagnostic or therapeutic purposes, or self-treatment of anorectal disease, by criminal assault and accident or, most commonly, for sexual purposes. Most patients with rectal foreign bodies present to the emergency room usually after efforts to remove the object at home. Many endoscopic and surgical techniques to remove rectal foreign bodies have been described in the literature and the reported variety in foreign bodies is as large as the number of techniques used to remove them[1–46]. The descriptions in the available literature are anecdotic and consist largely of case reports or case series[1–46].

In this report, a novel endoscopic technique to remove rectal foreign bodies using a pneumatic dilatation balloon normally used in achalasia patients is presented. In addition, a systematic review of the literature was performed for non-operative methods to remove foreign bodies from the rectum. These results are summarized and a practical flow chart is presented to guide the clinician in his or her treatment decisions.

A 19-year-old man presented at the emergency department, 12 h after insertion of a high pressure container with tanning spray into his rectum. A plain abdominal radiograph (Figure 1) showed the container in the rectosigmoid region. There were no signs of perforation. A flexible sigmoidoscopy was performed under conscious sedation. The object was located just above the rectosigmoid junction. The container could not be extracted by bimanual manipulation. An attempt to remove the object with conventional endoscopic instruments, such as polypectomy snares, was unsuccessful. 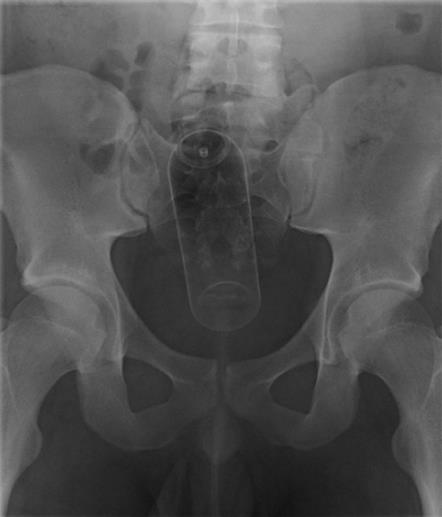 The sigmoidoscope could be passed alongside the foreign body to its proximal end. A guide wire was left behind with the sigmoidoscope removed. Subsequently, a 40 mm pneumatic dilatation balloon (Rigiflex®, Boston Scientific), normally used in achalasia patients, was inserted over the guide wire and inflated just above the container (Figure 2). For safety purposes, the sigmoidoscope was reintroduced alongside the catheter of the balloon to allow endoscopic visual control of the distal end of the container in the rectum. Gentle traction was exerted on the balloon catheter, and the container was successfully removed under fluoroscopic and endoscopic control (Figure 3). 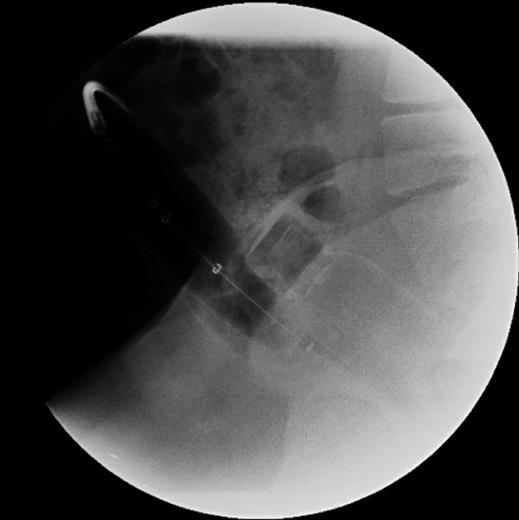 Figure 2 Lateral view of abdominal radiograph depicting the foreign body with the achalasia balloon inflated just above the container. 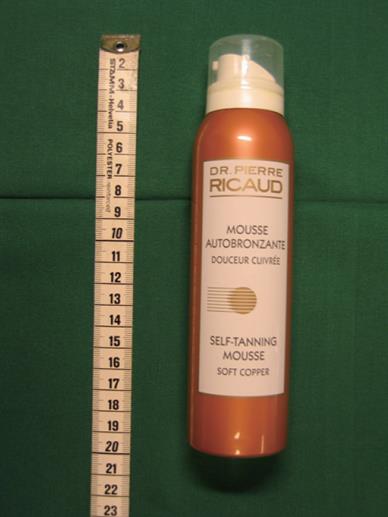 A large number of surgical and non-surgical techniques have been described to remove rectal foreign bodies[1–46]. Our case illustrates that for removal of foreign bodies retained in the rectosigmoid, extraction with a pneumatic dilatation balloon, inflated above the foreign body, may be an elegant and safe alternative when conventional techniques fail. Our technique has not been described before as revealed by a systematic review of the literature. We performed a systematic PubMed search from 1966 to present, using the search terms ‘rectal’, ‘rectum’, ‘colorectal’, ‘foreign’, ‘bodies’ and ‘endoscopic’. Only reports in English were included. The results of the systematic search of the literature, specified for the type of foreign body, are summarized in Table 1[1–36]. Table 1 also summarizes endoscopic techniques and non-endoscopic techniques for removing foreign bodies. In addition to the reports presented in the Table 1, several case series have been published without detailed information on the techniques used to remove various foreign bodies[18222537–46].

An algorithm was provided to guide the clinician in his or her treatment decisions, partly based on the methods presented in the Table 1 (Figure 4). We included only those methods most commonly used and excluded rare treatment variants. 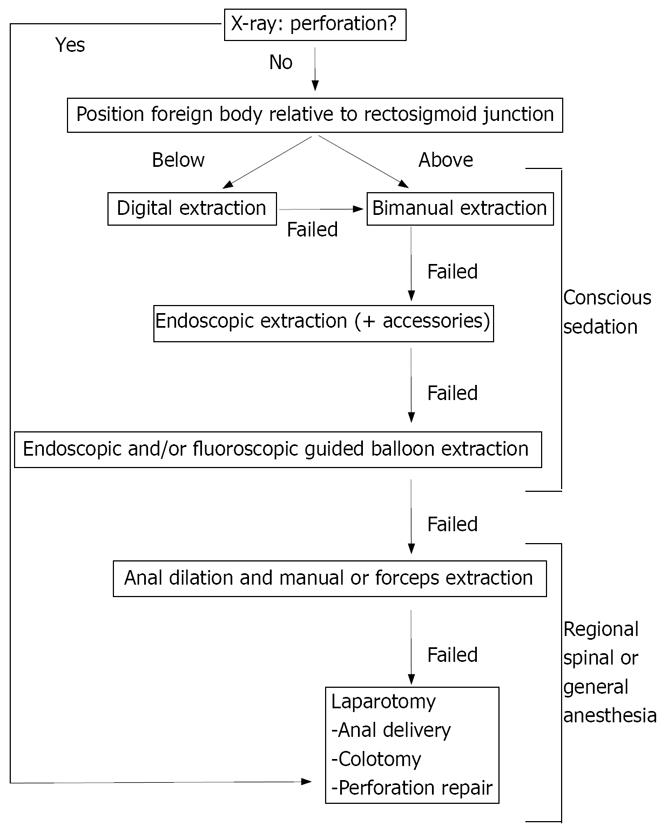 Figure 4 Algorithm for the removal of a colorectal foreign body.

The first step in the evaluation is that one should always be aware of the possibility of a large bowel perforation and perform radiological investigations. Plain abdominal radiography or water soluble contrast enemas may be helpful. An abdominal X-ray will also provide information on the localization of the foreign body, whether it is below or above the rectosigmoid junction. If perforation of the bowel has occurred, immediate laparotomy is warranted. If there are no signs of perforation, several management approaches can be tried. Our aim was to treat the patient on an outpatient basis with minimally invasive techniques and preferably under conscious sedation instead of general anaesthesia.

First, digital removal of the object should be attempted, if necessary with the patient at different positions. If this approach fails, one can try bimanual manipulation. The next step is the insertion of an endoscope with subsequent attempts to grasp the foreign body with regular endoscopy accessories like polypectomy snares. When this fails, it may be helpful to use devices that can be inflated in the rectosigmoid, such as a Foley catheter or an achalasia balloon. Such a device prevents a vacuum that might develop upon extraction of the foreign body and may also be directly used to remove the object.

Finally, when conservative measures fail, laparoscopic or laparotomic approaches are indicated. After removal, sigmoidoscopy is generally recommended to rule out perforations. In the largest series of patients with rectal foreign bodies described thus far (n = 93), it was found that objects retained for more than 2 days, those larger than 10 cm and those located proximal to the rectum increase the likelihood of surgery[37].

In conclusion, many techniques are available for the extraction of rectal foreign bodies. If possible, patients should be treated with minimally invasive techniques and preferably on an outpatient basis under conscious sedation.