Article-Type of This Article
Observer

Deposition of pigment in the intestinal mucosa is commonly observed by the endoscopist, especially within the colon, and particularly during investigations for constipation. Pigment may also be detected in the small intestine. Although labeled as melanosis, electron microscopy and X-ray analytical methods have provided evidence that this pigment is not melanin at all, but lipofuscin. Often, herbal remedies or anthracene containing laxatives are often historically implicated, and experimental studies in both humans and animal models have also confirmed the intimate relationship with these pharmacological or pseudo-pharmacological remedies. The appearance of melanosis coli during colonoscopy is largely due to pigment granule deposition in macrophages located in the colonic mucosa. The pigment intensity is not uniform, being more intense in the cecum and proximal colon compared to the distal colon. Possibly, this reflects higher luminal concentrations of an offending agent in the proximal compared to distal colon, differential absorption along the length of the colon, or finally, differences in macrophage distribution within the colon. Mucosal lymphoid aggregates normally display a distinct absence of pigment producing a “starry sky” appearance, especially in the rectosigmoid region. Interestingly, some focal, usually sessile, colonic mucosal neoplastic lesions, rather than submucosal lesions, may be better appreciated as pigment deposition may be absent or limited. If detected, removal and further histopathologic analysis of the polyp may be facilitated.

Prior studies using electron microscopy and X-ray analysis refined information regarding the composition of pigment granules in the intestinal tract. In particular, the distinction between lipofuscin, melanin and hemosiderin was more readily accomplished since separation of these pigment materials appeared to be possible based solely on their morphological characteristics[1]. X-ray analysis also permitted in situ analysis of tiny cellular inclusions in sectioned material with a high degree of sensitivity and sensitivity. As a result, a better understanding of pigments found in the intestinal tract has emerged.

Lipofuscin granules are residual bodies with undigested and/or oxidized lipids. These granules are thought to result from the processes of sequestration and enzymatic dissolution of cellular organelles within lysosomes. Electron microscopy is reported to show single membrane-bound bodies containing electron-dense lipid material along with electron-lucent or medium density neutral fat. Melanin is synthesized in the melanosome by oxidation of tyrosine to dopa and, eventually, melanin. Characteristic striated rod-like structures are observed under electron microscopy. Hemosiderin develops in residual bodies that result from macrophage phagocytosis of erythrocytes and/or their breakdown products. Lysosomal digestion results in electron-dense iron-containing particles. Each granule type is distinctive and has been well illustrated by others elsewhere[1].

Melanosis coli is probably the most common pigmen-tation change seen in the intestinal tract mucosa during endoscopic evaluation and in biopsy materials submitted for histopathologic evaluation. It was, however, first described by Cruveilhier in 1829 before the emergence of endoscopic technologies. The abnormally brown or black pigmentation can even be visualized in the biopsy specimen in tissue forceps or on the filter paper prior to fixation immersion. Representative endoscopic appearances of melanosis coli are shown in Figures 1, 2, 3. 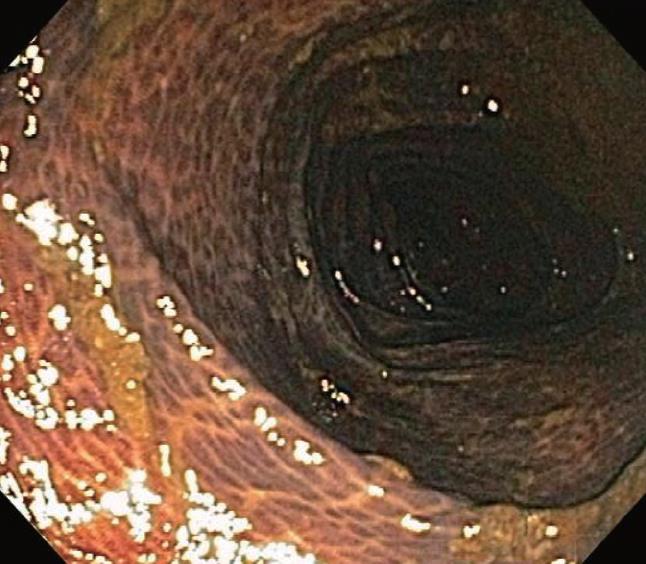 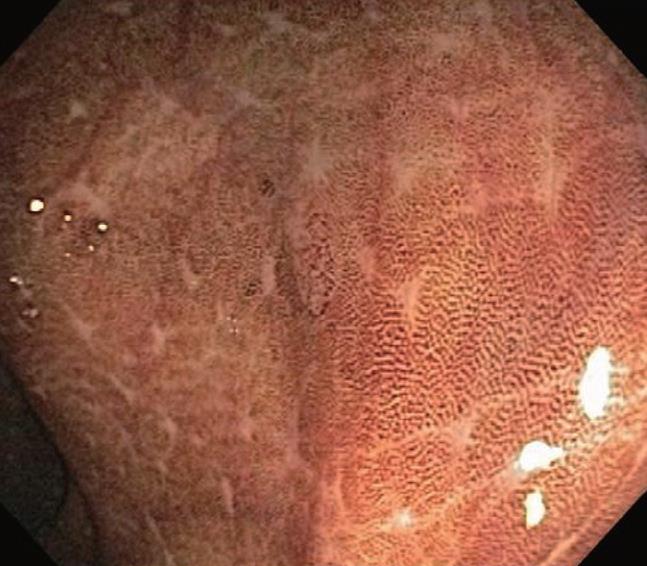 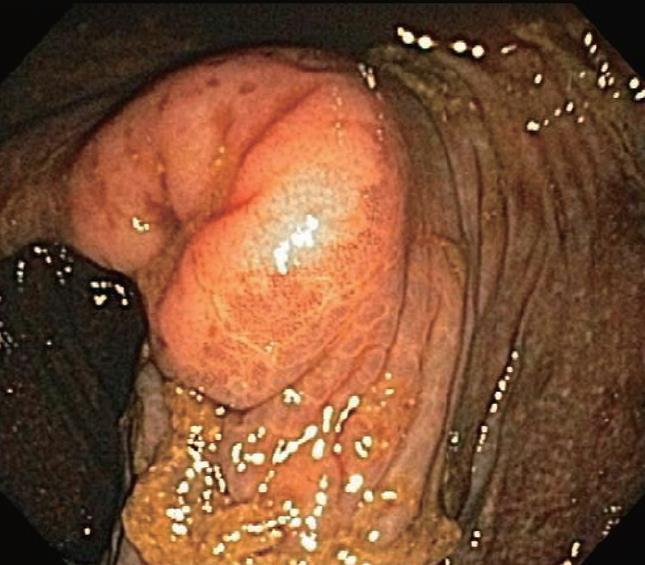 Figure 3 Ileal and cecal mucosa in melanosis coli. Melanosis is generally confined to the cecal mucosa although there is a very limited area of transition into ileal mucosa that is not pigmented.

As shown, the pigment in melanosis coli is well localized within the colon as there is usually no pigment deposition in the more proximal small intestine, including the ileum. Occasionally, the pigment may extend through the entire colon, including the appendix and into the most distal ileal transition region with the cecum. It appears to be most intense and most readily detected in the cecum and ascending colon, but pigment changes are variable in their intensity, even within the same colon. In some areas of the colonic mucosa where lymphoid cell aggregates in the lamina propria are numerous, such as the rectum, the pigmented colonic mucosa shows a characteristic “starry sky” appearance, as these lymphoid cells do not accumulate intracellular pigment. As shown in Figure 4, a biopsy routinely treated with a standard hematoxylin-eosin stain shows lamina propria macrophages filled with brown colored pigment granules. 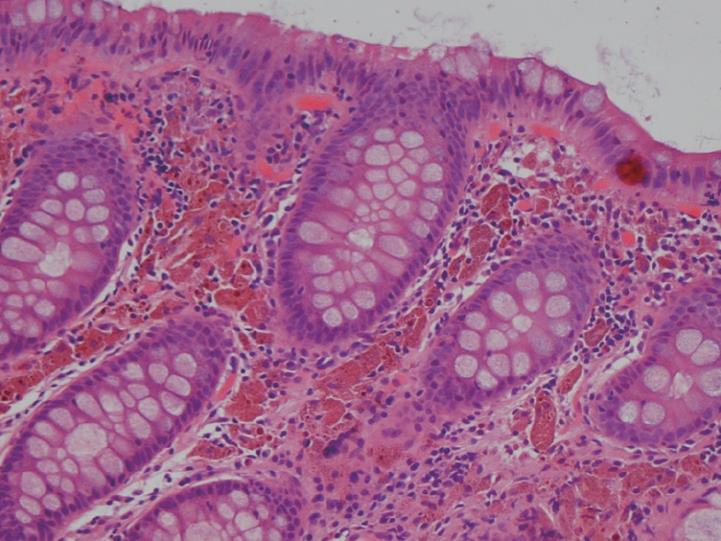 A variation in the intensity of the pigmentation through the length of the colon appreciated in some patients with melanosis coli at endoscopy may reflect differences in the luminal concentrations of possible offending agents (i.e., higher in proximal colon), such as laxatives or their byproducts. Alternatively, there may be differential regional rates of mucosal absorption within the colon. Finally, there may be colonic regional differences in the topographic distribution of macrophages within the colonic lamina propria. Studies on granule composition have demonstrated primarily lipofuscin, rather than the melanin pigmentation historically suggested by histochemical staining reactions. Indeed, it has been suggested by others that this entity might be more precisely labeled “pseudomelanosis coli” or colonic “lipofuscinosis”. Recently, however, a lectin method for application to formalin-based and paraffin-embedded colon[2] was used to explore changes in biopsies from patients with melanosis coli associated with laxative use[3]. These studies revealed increased apoptotic bodies in the colonic epithelium with pigment accumulation in macrophages. The results based on application of these lectins were typical of lipofuscin as well as ceroids. In addition, however, an intense argentaffin reaction abolished by bleaching was present, most typical of a melanic substance. The apoptotic bodies in the colonic epithelium were thought to be due to laxative-induced cell death, not from natural programmed cell renewal. In addition, these apoptotic epithelial cells were believed to be the source of the pigment saccharides (as detected by lectins) while the melanic substance appeared to be derived directly from the anthraquinones[3].

Melanosis coli is most often detected during investigation for long-standing constipation, often in conjunction with a history of the chronic use of anthracene cathartics (including cascara, senna, aloes and rhubarb). Experimental studies in different mammalian species along with humans previously documented the appearance, disappearance and re-appearance of the pigment in colorectal mucosa with repeated cycles of laxative administration. Interestingly, as shown in Figure 5, pigment deposition also may spare some neoplastic colonic lesions, including both adenomas and carcinomas. Thus, biopsy or removal of these non-pigmented foci in melanosis coli has been recommended elsewhere to exclude the presence of neoplastic epithelial cells. Other lesions, including submucosal leiomyomas shown in Figure 6, however, may still have pigment deposits within mucosal macrophages overlying these focal submucosal lesions. 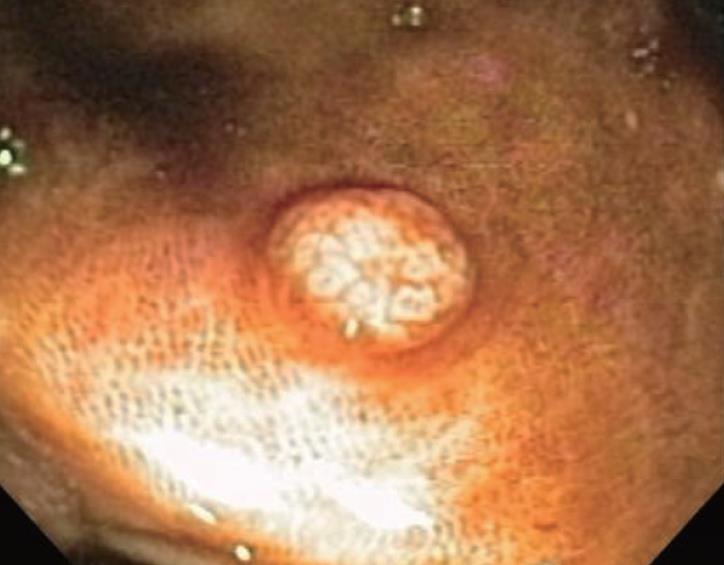 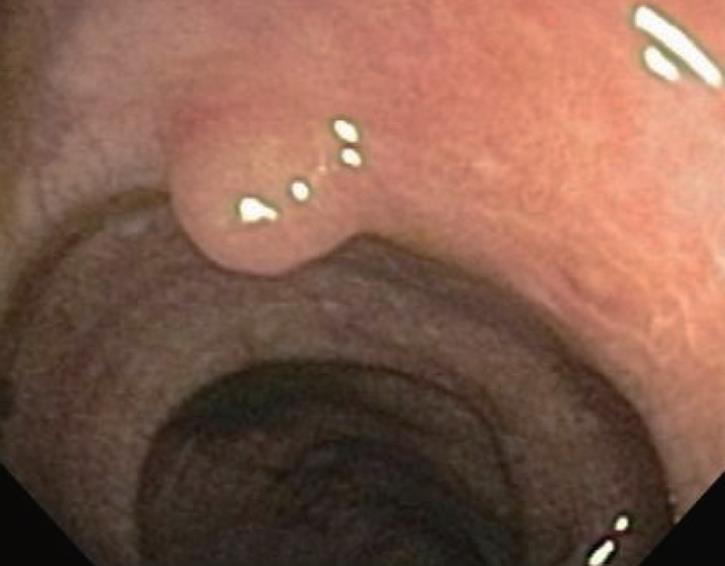 Anthraquinones appear to damage the colonic epithelial cells causing irreversible injury to some organelles. These cells are either shed into the colonic lumen, or the damaged organelles are sequestrated in autolysosomes in macrophages where digestion to residual lipofuscin bodies results. In some, lymph node involvement has also been observed. It is possible that this relatively selective colonic mucosal involvement may reflect the qualitative or quantitative differences in colonic microbial flora (as opposed to the small intestine). Alternatively, some other structural difference in colonic cells or their response to anthraquinone cathartics may be responsible for the colonic mucosal regionalization of the lipofuscin pigment deposition.

Treatment of this condition has not been established. Often, a recommendation is made to manage sympto-matic constipation with fiber-containing foods or substances with mucilage, including psyllium, along with avoidance of anthraquinone cathartics.

Melanosis has been rarely recorded in the small intestine, at least, in the most readily visualized areas during routine endoscopic evaluation, including the duodenum or distal ileum. As noted earlier, pigment may extend for a very limited distance into the most distal ileum transitional mucosa in association with melanosis coli. Melanosis ilei alone and exclusive of pigmentation elsewhere, however, has also been noted, usually as an incidental observation during autopsy. In this setting, it has also been historically recorded to occur with carcinoma of the colon[4]. Pigment in the ileum is thought to arrive there through ingested materials found either in food or even inhaled dust that has been swallowed[56]. Although aluminum and silicon-containing compounds are common and may be detected as food additives or in medicines, hemosiderin pigment has also been detected in the ileum and hypothesized to result from intermittent bleeding within the upper gastrointestinal tract. Similarly, melanosis duodeni has also been related to occasional bleeding, usually from peptic ulceration[7–10].