The two groups of patients used the same method for preoperative preparation. All the procedures were performed by the same operation team. Each of them conformed to the radical treatment principles including en bloc resection, no-touch isolation technique, proximal lymph-vascular ligation, complete lymphadenectomy, wound protection, and adequate resected margin of the rectum and TME for rectal cancer.

The demographic data of the two groups are shown in Table 1. There was no significant difference in age, gender, tumor location of rectum and Duke’s staging.

The electric power can be converted to mechanical energy by ultrasound frequency generator in US, which can generate 55.5 kHz mechanical oscillation. By the oscillation, the tissues can be cut and coagulated and vascular closure can be made. US can precisely cut and stop bleeding and produce less heat, thus not damaging the surrounding tissues because of the small thermal spread. When US produces less smog and less eschar, the operative field become more clearly. But US also has obvious drawbacks: US instrument is expensive, needs disposable material; and significantly increases costs of the laparoscopic operation[232728]. In clinical practice, we found that the laparoscopic rectal cancer operation can almost be conducted at the same anatomical space of rectum; monopolar electrocautery can also be applied in laparoscopic TME with anal sphincter preservation for rectal cancer because there is no large blood vessel in the space around the rectum.

ES can produce a higher surface temperature when managing the tissues; the theoretical distance of thermal conduction is longer than that of US, which makes it easy to damage the surrounding tissues[31]. Therefore, it is particularly important for surgeons to understand how to use ES in laparoscopic TME with anal sphincter preservation for rectal cancer. The correct method is to maintain a certain tension on both sides of the separation space; let the ES slightly contact the tissue with its sharp edge, and then gently slide along the surface of tissue in order to form a large space (Figure 1A). The tissue was cut immediately into slide aside to expose deep layer tissue and the important organs in the deep layer tissue can easily be uncovered and avoid injury, thus reducing the possibility of the surrounding tissue necrosis due to “heat chemotactic effect”. At the important anatomical position, the operative speed must be slow, use “mm-class” dissection and sharp dissection in combination with blunt dissection in order to reduce bleeding and avoid injury of major blood vessels and organs (Figure 1B). There was no significant difference in postoperative complications such as anastomotic leakage and wound infection between ES group and US group in our study, indicating that ES is as safe as US in laparoscopic TME with anal sphincter preservation for rectal cancer. The operative time was almost the same between the two groups, although the cutting speed of ES was faster than that of US. On the other hand, the intraperitoneal CO2 must be exchanged regularly due to heavy smog generated by ES in order to maintain the clarity of operative vision, although it might slow the operative speed of ES in a certain extent. During operation, it must rely on the movement of metacarpophalangeal joint opening and closing repeatedly in order to control US. But in ES operation, surgeons might feel more comfortable as they can grasp ES, and rely on the push-pull movement of the arm, and the hand movement intensity might significantly decrease. Compared with US, ES has prominent advantages, including sturdiness, durability, low cost, and being suitable for laparoscopic TME with anal sphincter preservation for rectal cancer in less developed settings. 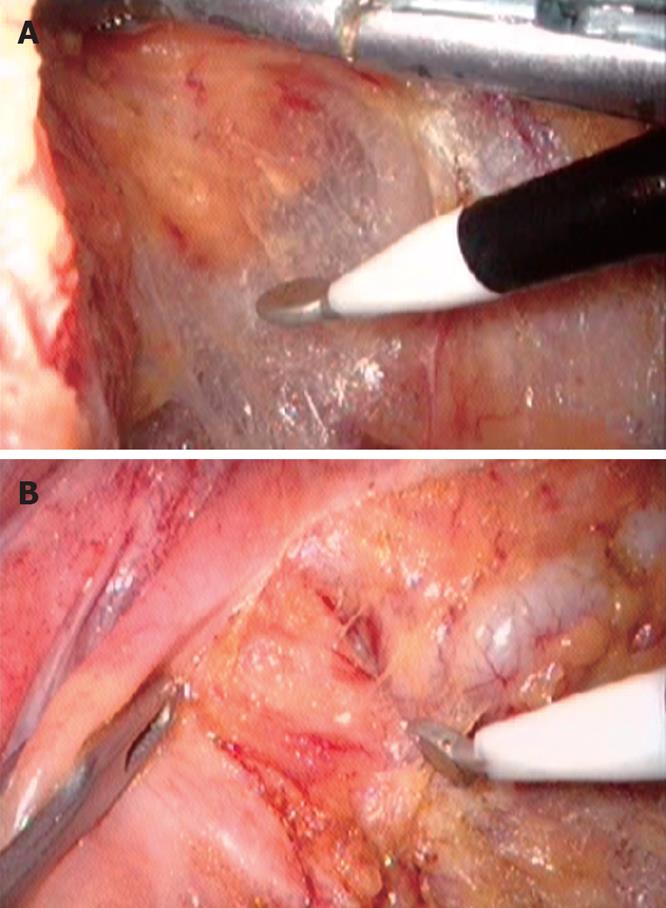 This is an interesting manuscript looking into two different methods of dissecting the rectum laparoscopically. It is a good paper.

Science and Technology Development Project of Hebei Province, No. 052761001D-26