AIM: To analyze the serum levels and prognostic significance of vascular endothelial growth factor (VEGF) -A, -C, and -D, and their receptors, VEGFR-1 and -2 in gastric adenocarcinomas.

METHODS: The serum levels of VEGF family members were measured in 76 control subjects and 76 patients with gastric adenocarcinoma using an enzyme-linked immunosorbent assay (ELISA). These measurements were correlated with clinco-pathological features and survival rates.

CONCLUSION: Serum VEGF levels vary significantly in the same cohort of patients with variable clinico-pathological features and prognostic values. The simultaneous measurement of VEGF receptors levels in sera may overcome the limitations of a single biomarker assay.

Gastric cancer is the second most common cancer worldwide and remains a global health burden[1]. The prognosis of patients with gastric cancer has been shown to be influenced by established surgical-pathological features, such as pathological stage, location of the tumor, and histological type and grade of the tumor[2–4]. In comparison, the intense search for predictive molecular biomarkers has not yet translated into clinical use[5–7].

There is growing recognition of the central role that the vascular endothelial growth factor (VEGF) family plays in angiogenesis in which the formation of new blood vessels is necessary for the growth and spread of tumors[8]. The VEGF family consists of seven members-VEGF-A, VEGF-B, VEGF-C, VEGF-D, VEGF-E, VEGF-F, and placental growth factor (PlGF)-which share eight cysteine residues in a VEGF homology domain[910]. The members act through specific tyrosine kinase receptors, VEGFR-1, -2 and -3. VEGF-A acts through VEGFR-1 and -2 receptors, VEGF-C and -D act through VEGFR-2 and -3[911].

Studies have shown an association between intratu-moral microvessel density and tumor aggressiveness in gastric cancer[1213]. Among angiogenic stimulators, VEGF-A plays an essential role in both vasculogenesis and angiogenesis[14]. Serum concentrations of VEGF-A have been examined in patients with gastric cancer and a relationship between the serum concentration of VEGF and metastasis and/or poor outcome has been demonstrated[1516]. However, the significance of other VEGF family members (VEGF-B, -C, and -D) in tumor angiogenesis and metastasis are not fully demonstrated[17]. Recently, the prognostic importance of serum concentrations of other VEGF family members (VEGF-C and -D and their receptors) in gastric cancer has been reported[1819]. Overall, these studies were limited to one or two VEGF family members and their receptors and did not examine the full profile of expression of these proteins in the same patient[141518].

In the current study, we evaluated the serum levels of VEGF-A, -C, and -D, and their receptors, VEGFR-1 and -2 in both healthy controls and gastric cancer patients. We then correlated these serum levels with clinico-pathological features and patient survival rates.

The study population consisted of a series of unrelated patients diagnosed with gastric cancer in three main hospitals in the Sultanate of Oman (Sultan Qaboos University Hospital, Royal Hospital, and Sohar Hospital). The control group was composed of subjects of the same ethnic and geographical origin as the patients. The Medical Research and Ethics Committee of the College of Medicine of Sultan Qaboos University approved the study design. The study subjects gave an informed consent prior to participation in the study.

Peripheral venous blood samples were obtained prior to any treatment and allowed to clot at room temperature and centrifuged at 2000 g for 10 min. Sera were separated, aliquoted, and stored at -70°C until assay. Serum VEGF concentrations were determined using a commercially available enzyme-linked immunoassay (ELISA) designed to measure VEGF-A (VEGF 165), VEGF-C, VEGF-D, VEGFR-1, and VEGFR-2 levels (Quantikine, R&D Systems Europe, Abingdon, UK). Assays employed the quantitative sandwich enzyme immunoassay and were performed according to the manufacturer’s procedure.

Overall survival rates were determined from the time of biopsy-proven diagnosis until either the time of death or last known follow-up examination. The dates of death were obtained from either medical records or phone contact. The Kaplan-Meier method was used to estimate overall survival time, and the statistical significance was determined by log-rank test. Backward conditional Cox proportional hazards regression model was utilized for multivariate analyses where age (≤ 40 years, > 40 years), gender, proximal or distal location, histological classification (intestinal vs non-intestinal), T stage (1 + 2 vs 3 + 4), presence or absence of lymph node metastasis, overall all stage (I + II vs III + IV), tumor differentiation (well vs moderate + poor), all the VEFG factors were included. P values less than 0.05 were considered statistically significant. Analysis of data was performed using SPSS 10.0 software.

A total of 76 gastric cancer patients and 76 unrelated controls were included. The age range for the participants included in the study was 21-82 years; the mean and standard deviation of ages for the patients and controls were 55.7 ± 11.3 and 38.5 ± 10.2 years, respectively. The proportion of males (n = 41) and females (n = 35) were equal in both groups. Fifty four patients received either chemotherapy alone or chemoradiotherapy.

The association between serum values of VEGF-A, -C, -D, and VEGFR-1 and -2 and clinico-pathological features 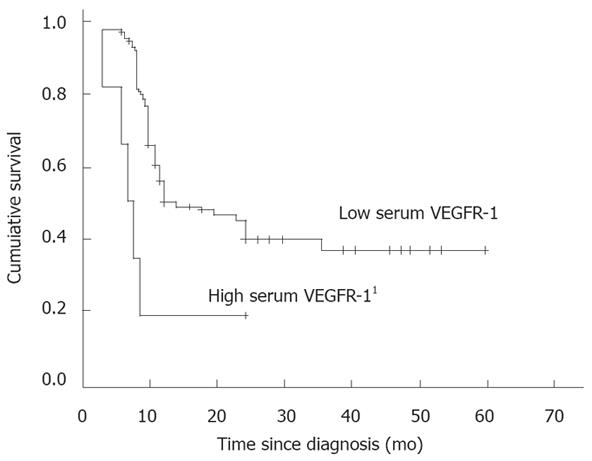 Studies on the role of the VEGF family in gastric cancer have focused on individual VEGF members and their respective receptors[141518]. The evaluation of the simultaneous expression of VEGF family members and their receptors may provide more accurate prognostic information[17]. Therefore, we have investigated the serum levels of VEGF-A, -C, -D, and VEGFR-1 and -2 and studied their predictive and prognostic significance in the same group of patients.

In the present study, the VEGF-A and VEGFR-1 levels are higher in patients with gastric cancer than in healthy controls, which is consistent with results from other studies[152021]. However, we found that serum VEGF-D levels were higher in the control group than in patients with gastric cancer. George et al[12] studied VEGF-A, -C, and -D mRNA tissue expression in colorectal cancer progression, demonstrating that VEGF-D mRNA remained at persistently low levels in carcinomas compared with adenomas, and that both VEGFR-2 and VEGFR-3 mRNA expression levels remained constant. This result suggested that VEGF-D acts as a competitive agonist with VEGF-A and VEGF-C; a decrease in VEGF-D levels may allow increased access of VEGF-A and VEGF-C, which are more potent angiogenic cytokines than VEGF-D, to the two VEGF receptors[22]. It has been previously shown that tissue expression of certain VEGF family members correlates with their serum levels[18]. Therefore, the advanced tumor stage presentation that predominated in the current cohort of patients may have led to the differential expression of the VEGF family members, further emphasizing the importance of the simultaneous measurement of these factors.

The correlation of markers of angiogenesis and clinico-pathological features further highlights the complex interaction between various factors and their respective receptors[1623]. Whereas VEGF-A and -D did not correlate with any of the clinico-pathological features studied, it is interesting to note the strong association between VEGFR-1 and advanced stage cancer, the presence of metastasis, and poor tumor differentiation. VEGF-C was a serum biomarker for advanced tumor stage and poor differentiation, whereas VEGFR-2 correlated with poor tumor differentiation. It is interesting that serum VEGF-C and -D levels did not correlate with lymph node metastasis, a result that has been shown previously[18]. This finding is most likely due to the fact that most patients included had lymph node metastasis and, therefore, such differences could not be found (Table 2).

The available data on the prognostic significance of serum VEGF levels in malignancies is controversial[24–26]. The prognostic significance of VEGF (in particular, of VEGF-A), as determined by ELISA, has been commonly studied in various tumors[24–27]. It has been shown that high serum VEGF levels correlate with poor prognosis in certain hematological malignancies[2829]. In gastric cancer, it has been shown that serum VEGF-A levels correlated with local tumor extent, disease stage, and the presence of distant metastases, and is an independent prognostic factor for patient survival[141520]. Recently, Wang et al[9] reported that serum VEGF-C levels might be a useful biomarker to determine the presence of lymph node metastasis in patients with gastric cancer as well as correlate with VEGF-C tissue expression[18]. Juttner et al[8] showed that both VEGF-D and VEGFR-3 are independent prognostic biomarkers to identify patients with poor prognosis after curative resection of gastric adenocarcinomas; when combined with an analysis of VEGF-C, patients with shorter survival times could be predicted[17]. In the current study, a significant correlation between VEGFR-1 and advanced tumor stage, presence of metastasis, and poor tumor differentiation in turn reflects poor survival outcome as shown in Figure 1. To our knowledge, this is the first study to report on the prognostic significance of serum VEGFR-1 levels in patients with gastric cancer. It has been suggested that the VEGFR-1/VEGF ratio in sera may be of greater prognostic value than VEGF levels alone[28], hence, overcoming the limitations of a single biomarker assay[2730].

In conclusion, we have demonstrated that there are significant variations in VEGF serum concentrations when measured simultaneously that correlate with important variations in clinico-pathological features and prognostic significance. Future work will address the application of this concept on a larger cohort of patients to generate a predictive profile that examines the simultaneous expression of these proteins at the tissue level.

The prognostic importance of serum concentrations of vascular endothelial growth factor (VEGF) family members in gastric cancer has been reported. Overall, these studies were limited to one or two VEGF family members and their receptors and did not examine the full profile of expression of these proteins in the same patient. In the current study, authors evaluated the serum levels of VEGF-A, -C, and -D, and their receptors, VEGFR-1 and -2 in both healthy controls and gastric cancer patients. They then correlated these serum levels with clinico-pathological features and patient survival rates.

The results of the present study demonstrate the variation in VEGF family members when measured simultaneously. The measurement of all these proteins may provide more accurate predictive and prognostic information.

Angiogenesis is a physiological process in the body that involves the formation of new blood vessels. VEGF family plays an important role in angiogenesis. The VEGF family consists of seven members-VEGF-A, VEGF-B, VEGF-C, VEGF-D, VEGF-E, VEGF-F, and placental growth factor. The members act through specific tyrosine kinase receptors-VEGFR-1, -2 and -3. VEGF-A acts through VEGFR-1 and -2 receptors; VEGF-C and -D act through VEGFR-2 and -3.

This is an interesting paper. Authors analyzed the serum levels and prognostic significance of VEGF-A, -C, and -D, and their receptors, VEGFR-1 and -2 in gastric adenocarcinomas.