METHODS: Seventy six untreated HCV-infected patients with initially normal liver as defined by a Knodell score ≤ 3, with 2 liver biopsies and detectable HCV-RNA were included. Markers of fibrosis progression were assessed.

RESULTS: Median duration of infection and time between paired biopsies was 13 (95% CI: 1-28) and 4 (95% CI: 2-16) years respectively. Alanine-transaminase (ALT) activity was normal in 43.4% of cases. 50% demonstrated progression of the necro-inflammation and 34% of fibrosis after a median time evolution of 4 years (95% CI: 2-16). The median difference in the necro-inflammation and fibrosis score between biopsies was low, 1.5 and 0.0 respectively. Univariate analysis showed there was no difference between fibrosis activity or evolution according to genotype or viral load. A higher fibrosis progression (P = 0.03) was observed in patients with body mass index (BMI) > 25. Fibrosis progression correlated with the time interval between biopsies (P = 0.01). A significant progression of activity (1.7 vs 0.4, P < 0.05) or fibrosis (0.9 vs 0.0, P < 0.01) was observed in patients with elevated ALT. There was a significant correlation between activity progression and fibrosis progression (P = 0.003). Multivariate analysis demonstrated that fibrosis progression was associated with elevated ALT, BMI > 25 and the time interval between 2 biopsies.

Several studies have evaluated the long-term outcome of fibrosis progression in patients with chronic active hepatitis. A normal liver is observed in about 10% of infected patients as defined by the absence of significant pathological changes[1–3]. The natural history of these so-called “healthy hepatitis C virus (HCV) carriers” is not fully defined. Studies usually differentiate patients with or without alanine-transaminase (ALT) abnormalities but rarely patients with or without liver biopsy abnormalities[4]. It is estimated that 10% to 40% of HCV-infected patients have a carrier state with normal ALT and a slower natural course of the disease than patients with elevated ALT[5–9]. The aim of this study was to better define the pathological spontaneous evolution in HCV-infected immunocompetent patients without specific histopathological lesions.

Among our file of 3600 HCV-infected patients in the liver unit, we selected retrospectively those fulfilling the following criteria: detectable HCV RNA, Knodell score ≤ 3 at the first pathological evaluation[10], at least 2 sequential liver biopsies in the absence of antiviral therapy or HIV and HBV confection. Kidney transplant recipients or hemodialyzed patients were excluded as well as patients with other causes of chronic liver disease (hepatotoxic drugs, autoimmune chronic hepatitis, hemochromatosis, Wilson’s disease and alpha 1 antitrypsin deficiency). In our center we usually perform a liver biopsy in all HCV-RNA chronic carriers, whatever the transaminase levels. In the case of low pathological lesions, we usually propose therapeutic abstention, a biochemical follow-up twice a year, an abdominal ultrasonography (US) yearly and a pathological follow-up with a liver biopsy every three to five years. In patients infected by blood transfusion or intravenous drug use, duration of HCV infection was estimated as the time elapsed from the year of transfusion or intravenous drug use (IVDU) onset to that of the first liver biopsy. Gender, route of infection, HCV viral genotype and serum viral load, body mass index (BMI), alcohol consumption before the first biopsy, serum ALT and serum glutamyl-transferase (GGT) levels were recorded for each patient. 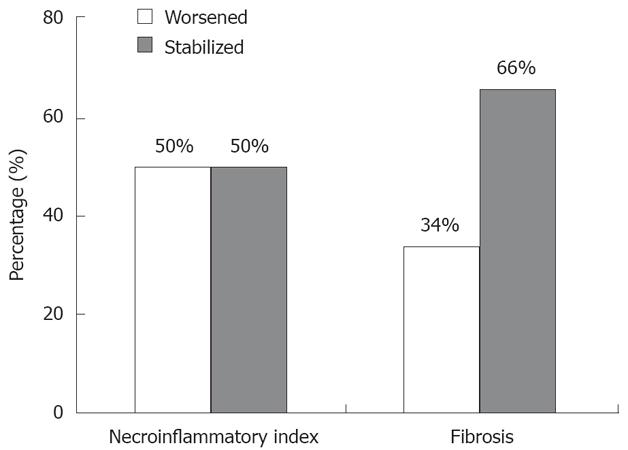 The long-term natural history of the so-called healthy carriers of HCV is not clear. Although ALT levels do not reflect the severity of the liver damage [11], patients with persistently normal ALT levels usually have a less severe disease, corresponding to a lower progression of fibrosis[812–15]. Nevertheless, some reports suggest the presence of significant fibrosis or cirrhosis in some of them[8131617]. Other reports underline the relationship between excess weight and hepatitis C-related fibrosis progression[1819]. This study was designed to evaluate whether HCV-infected subjects with pathologically normal liver had any progression of liver damage after 4 years of follow-up. This might allow the screening of patients for which antiviral treatment would be helpful.

In our study, fibrosis progression only concerns one third of the patients. The short time between two biopsies cannot exclude a later worsening of liver fibrosis, which is probably slow, with a low risk of evolution to cirrhosis. Although ALT levels do not reflect the severity of the liver disease, elevated ALT was associated with liver fibrosis progression in this population with initially normal liver. Overweight, accordingly to the recent literature was also associated with fibrosis worsening[19]. Patients with elevated ALT or BMI may have more necro-inflammatory activity resulting in more pronounced fibrosis progression[19–21].

Our results suggest that ALT level follow-up is necessary whatever the histopathological results. In the subgroup of patients with elevated ALT or BMI, pathological follow-up seems to be useful and weight loss should be proposed. Our study suggests that liver fibrosis progression is correlated with time between biopsies, which probably make histopathological controls necessary. In patients with normal liver, normal ALT level and without co-morbidities such as excess weight, the time between biopsies should be longer than 5 years.

Antiviral therapy is usually not used in the so-called “asymptomatic HCV-carriers”[2324]. We can differentiate in these “asymptomatic carriers” a sub-group which is at risk of fibrosis progression. The question is whether and when pegylated interferon and ribavirin should be a therapeutic option? Theoretically, if patients with normal liver tests do not really need treatment, therapy still can be proposed to interested patients with the same response rate as patients with elevated transaminases [25–29]. In addition, patients with a higher risk of liver fibrosis progression should be treated, particularly in case of genotype 2 or 3 infection[30].

In conclusion, this study confirms that the ‘‘HCV-healthy carrier’’ state does exist. Fibrosis does not worsen in two thirds of HCV-carriers without histopathological features after 4 years, supporting the concept that the natural history of chronic hepatitis in this group of subjects is characterized by a very slow or no progression. Antiviral therapy is not recommended in these patients with normal ALT or BMI under 25. Overweight, HCV-infected patient should be informed of the risk of liver fibrosis progression and the need of dietetic councils.

Chronic hepatitis C virus (HCV) infection cause liver damage, with a fibrotic scarring, which can progress to cirrhosis. The natural history of the infection varies among patients. For instance, in 10% of the case, the liver appears pathologically normal. Altogether, 10% to 40% of HCV infected patients harbor normal liver tests and the disease progresses very slowly as compared with patients with elevated liver tests. Until now, studies usually differentiate patients with or without liver test abnormalities but rarely patients with or without liver biopsy abnormalities.

The goal of this work was to evaluate and differentiate patients for whom treatment will offer a better management of the disease. Among HCV infected patients without significant liver damage, one-third progress toward fibrosis. This work focuses on early detection of these patients with a view to treatment before fibrosis onset.

These observations may be helpful to suggest if a patient should receive an antiviral therapy. A treatment should be counselled to the patients with abnormal liver test and elevated BMI.

Liver fibrosis is the excessive accumulation of a scarred tissue that occurs in most types of chronic liver diseases. This fibrosis can progress to cirrhosis. The transaminases are a group of liver enzymes including alanine aminotransferase (ALT). Elevated transaminases can be an indicator of liver damage.