AIM: To compare a lansoprazole-based triple versus quadruple therapy for Helicobacter pylori (H pylori) eradication with emphasis on side effect profile, patient compliance and eradication rate at a rural district general hospital in Wales, United Kingdom.

RESULTS: Seven patients were withdrawn after randomisation. Fifty patients were assigned to LAC group and 44 to LMBT group. The intention-to-treat cure rates were 92% and 91%, whereas the per-protocol cure rates were 92% and 97%, respectively. Side effects were common, with 56% experiencing moderate to severe symptoms in the LAC group and 59% in the LMBT group. Symptoms of vomiting, diarrhoea and black stools were significantly more common in the LMBT group. Patient compliance was 100% for triple therapy and 86% for quadruple therapy (P < 0.01). One-third of patients in both groups were still taking acid-reducing medications at six-month follow-up.

CONCLUSION: One-week triple and quadruple therapies have similar intention-to-treat eradication rates. Certain side effects are more common with quadruple therapy, which can compromise patient compliance. Patient education or modifications to the regimen are alternative options to improve compliance of the quadruple regimen.

European studies have shown that quadruple therapy, even though more effective with a cure rate of over 95% by per protocol analysis[1–3], is less popular compared to a standard triple therapy for eradication of Helicobacter pylori (H pylori) infection. The reasons for this are the complexity of the regimen and also its side effects. Scheduling drugs four or more times a day reduces compliance[45]. However, some studies have suggested that quadruple therapy has a similar magnitude of adherence and adverse effects compared to triple the-rapies[67].

We conducted a prospective randomised trial of patients under the care of an upper gastrointestinal surgeon at Ysbyty Gwynedd, a rural District General Hospital in North Wales. The population served by Ysbyty Gwynedd is predominantly (98.8%) white and there are about 120 new cases of H pylori each year from a population of around 180 000. Twenty-four percent of strains were resistant to metronidazole, 7% to clarithromycin and 4% to both. There was resistance to tetracycline in 1 out of 363 isolates and none to amoxycillin[12].

The Local Ethics Committee of the participating hospitals approved the study. From June 2001 to November 2005, 101 patients with diagnosis of infection proven by gastric histology or urease test or culture were included in the study. Two positive tests were required for inclusion. The inclusion and exclusion criteria are shown in Table 1.

Patients were recruited into the trial once they had met the criteria and given fully informed written consent. Patients were recruited from the outpatient departments at one district general hospital and a satellite hospital served by the same team of doctors. The patients received a 7-d course of either a triple regimen (LAC) or a quadruple regimen (LMBT) (Table 2).

Randomisation took place at the hospital pharmacies when the patients collected their medications with a note from the recruiting doctor. The pharmacists dispensed the medications adhering to the order on a random list of therapy regimens.

A printed chart showing the names of the drugs, the number of pills to take and the time schedule was given to all participants to improve understanding and compliance with treatment.

Compliance was evaluated by patient’s record of each dosage taken onto the chart during the week of therapy. Any tablet that was not consumed needed to be brought back to the clinic for pill count. The patients were asked to record the reasons for missed dosages. They were also asked to record any side effects and their severity during the therapy. Proton pump inhibitors and other acid-reducing medications were not allowed after treatment. The patients returned for interview at 6 wk after therapy. The efficacy of treatment was evaluated by means of the 13C-urea breath test performed following the standard European protocol at 8 wk following the start of therapy[12]. Patients were reviewed again at 6 mo after therapy to assess symptoms and use of any medications after determining their post therapy H pylori status. Patients who tested positive were offered the alternate regimen and retested after a gap of 2 mo. 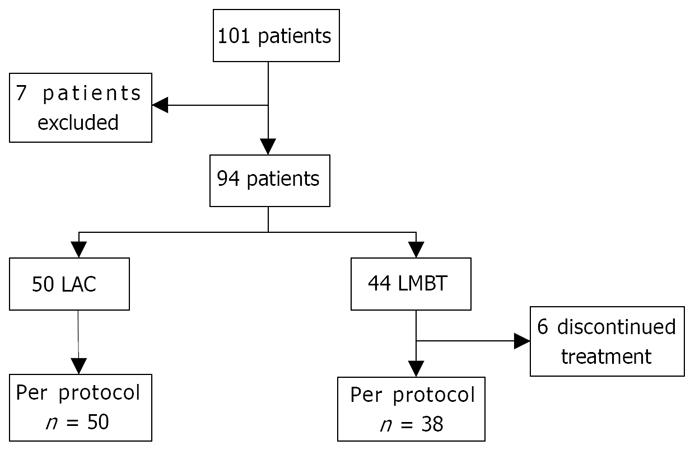 Fifty patients were assigned to the LAC group and 44 to the LMBT group. The demographic and clinical characteristics of the groups were comparable (Table 3).

Compliance was excellent in the LAC group with all the patients completing the 7-d therapy. In contrast, 6 patients (14%) in the LMBT group failed to complete the treatment (P < 0.01). In spite of this three had a negative breath test.

Four out of the six patients had attributed moderate/severe nausea as the reason for discontinuing treatment. One had severe diarrhoea and another had nausea, vomiting and diarrhoea.

Side effects were reported by vast majority of patients in both groups, 45 patients (90%) in the LAC group and 42 patients (95%) in the LMBT group.

All 94 patients returned for a 13C-urea breath test 2 mo after eradication therapy. Four patients (8%) from the LAC group and four patients from LMBT (9%) had positive results indicating failure of H pylori eradication. Three of the four patients had an incomplete quadruple therapy (Table 6).

All the eight patients who tested positive with 13C-urea breath test had the alternate regimen. Three of four patients, who had initially LAC and then LMBT therapy, were negative on the second breath test.

Eighty-six patients (91.5%) returned for a 6-mo follow-up. Over one-third of patients had recurrent or persistent symptoms and remained on long-term acid-reduction therapy (with proton-pump inhibitors, H2-antagonist or other antacids) even after successful eradication (Table 7).

Side effects are common in both regimens occurring in around 90% of patients. However, severe side effects occurred more frequently with quadruple therapy (23% vs 6%) and this reduced compliance.

Four out of the six patients taking quadruple therapy stopped because of nausea and vomiting, which was probably due to metronidazole. Replacing metronidazole with amoxycillin should reduce these side effects and increase compliance[26]. Interestingly, dry mouth was noticed more in the triple therapy group even though lansoprazole was the most likely cause.

Quadruple therapy is very cost effective and should be considered as a first-line therapy especially when there are economic constraints. Lansoprazole-based quadruple therapy costs £17 as against £38 for the triple therapy for a one-week course[27]. The difference of £21 per treatment can be relieved from economic burden for the health service to treat this common condition.

Patients have to be warned that about one sixth of them will have persistent symptoms and about third of them will develop recurrent symptoms with a similar proportion needing long-term treatment with a proton-pump inhibitor, H2-antagonist or other antacids.

Modified seven-day quadruple therapy, by reducing the frequency of tetracycline chloride and bismuth subcitrate from four times to three times daily, has also been tried successfully as a first-line treatment with cure rate and compliance rate of over 90%[2]. Bateson has shown that a twice-daily quadruple therapy using lansoprazole, tetracycline, clarithromycin and metronidazole is effective (95.5% eradication rate) in UK patients with duodenal ulcer but this pre-dated resistance to clarithromycin and metronidazole[28]. Amoxycillin has been shown to improve eradication in resistant patients and perhaps a trial of a twice-daily quadruple therapy substituting amoxycillin for metronidazole should be considered[26]. Other approaches to the problem of antibiotic resistance include a sequential therapy that substituted amoxycillin with tinidazole during the first 5 d of a 10-d triple therapy with pantoprazole, amoxycillin and clarithromycin, which has been shown to achieve a significantly higher eradication rate[29]. Pretreatment sensitivity testing has been confirmed to be cost effective by significantly improved eradication in a study that used omeprazole and two antibiotics chosen based on susceptibility testing, compared to omeprazole, clarithromycin and metronidazole standard triple therapy[30].

Recent randomised studies that compared triple therapy with quadruple therapy as a first-line treatment option for H pylori and some reports showed superior eradication rates with the quadruple therapy[63132] whereas others have shown no difference[3334]. Quadruple therapy is becoming the standard treatment as resistance to clarithromycin, and to a lesser extent metronidazole, is reducing the efficacy of triple therapies. The side effects may be reduced by replacing metronidazole with amoxycillin but patients should be better educated about the side effects in order to improve compliance and cure rates.

The treatment for Helicobacter pylori (H pylori) is becoming less effective as the organism is becoming resistant to the commonly used antibiotics in triple therapies. Quadruple therapies were less popular because of their side effects but still have good eradication rates.

This study compares lansoprazole-based triple and quadruple therapy for H pylori infection in white Caucasians in rural Wales, an area with low resistance to Clarithromycin and moderate resistance to metronidazole.

Both regimens had high eradications rates (> 90%) showing that resistance has not yet significantly affected this UK population. Even better rates (97%) can be achieved with quadruple therapy if patients are able to complete the full course. Patients need to be educated about the side effects and importance of completing the course to achieve the higher eradication rates.

Quadruple therapies provide a cost effective and highly successful treatment for H pylori. The side effects and compliance may be improved by substituting amoxycillin for metronidazole-an area for future research.

The authors compared lansoprazole-based triple and quadruple therapy in the eradication of H pylori. They found that both regimens were equally effective and that quadruple therapy was less costly even though 6 patients had to discontinue treatment because of side effects. This is an important study.