AIM: To observe the inhibition of hepatitis B virus (HBV) replication and expression in HepG2.2.15 cells by combination of small interfering RNAs (siRNAs).

RESULTS: siRNAs showed marked anti-HBV effects. siRNAs could specifically inhibit the expression of HBsAg and the replication of HBV DNA in a dose-dependent manner. Furthermore, combination of siRNAs, compared with individual use of each siRNA, exerted a stronger inhibition on antigen expression and viral replication. More importantly, combination of siRNAs significantly suppressed HBV cccDNA amplification.

Nucleotide analogues, such as lamivudine, can effectively inhibit HBV DNA synthesis[34] and are widely used in the treatment of HBV-infected patients. However, analysis of viral kinetics during lamivudine therapy revealed that a prolonged treatment is required since lamivudine does not completely inhibit viral replication and the rate of clearance for infected hepatocytes is slow[5]. HBV is not a cytopathogenic virus and hepatocytes are normally long-lived and their half-life is estimated to be 6-12 mo or longer, explaining the requirement for a long-term antiviral treatment course, which is associated with the selection of drug-resistant mutants[6].

During HBV replication, viral covalently closed circular DNA (cccDNA) serves as the template for viral transcription and its production is regulated and amplified by an intra-cellular pathway in which newly synthesized genomic DNA is recycled to the nuclei[78]. This process establishes a steady pool of nuclear cccDNA, which is maintained during the life of infected hepatocytes. It is likely that cccDNA may reactivate synthesis of viral transcript and protein, leading to a rebound of active viral replication. Thus, elimination of cccDNA from infected hepatocytes still remains a challenge in therapy for HBV-infected patients. A potent agent used in anti-HBV therapy should be evaluated with special emphasis on its inhibitory effect against the amplification of cccDNA.

Small interfering RNAs (siRNA) are double-stranded RNA molecules, approximately 21 nucleotides in length that hybridize to a homologous mRNA target and result in degradation of mRNA[9]. This posttranscriptional gene silencing process, called RNA interference (RNAi), is evolutionarily conserved in both plants and eukaryotic cells[1011]. Due to the high sequence specificity and efficiency, RNAi can be used in functional genomic studies such as human immunodeficiency virus (HIV), hepatitis C virus (HCV), and influenza virus, etc[12–14]. HBV is one of the major candidates for RNAi, as its pregenomic RNA is a key intermediate for maintaining DNA replication via reverse transcription in the viral life cycle. Many studies have demonstrated that siRNA targeting different regions of the HBV genome can block viral replication and antigen expression[15–19]. Our previous study showed that siRNA targeting HBV nuclear localization signal (NLS) can inhibit viral DNA synthesis and cccDNA amplification[20]. As HBV infection is a cellular infection involving multiple genes, we hypothesize that combination of siRNAs targeting different sequences along the HBV NLS mediates a greater inhibitory efficacy on cccDNA amplication. If this is the case, it would be of significance in the treatment of HBV infection. In this study, we analyzed the kinetics of HBV genome replication during siRNA therapy and tested the antiviral capacity of combination therapy in comparison to monotherapy in HepG2.2.15 cells, showing that combination of siRNAs exhibits better effects on the inhibition of HBV replication, especially at viral cccDNA level.

siRNA expression plasmid was generated as previously described[21]. Briefly, 21-nucleotide long inverted sequences were cloned into the plasmid pGenesil/U6. Five thymidines were inserted into the downstream anti-sense strand to provide a stop signal for the polymerase III RNA polymerase. The sense strand of hairpin was homologous to the target mRNA (NLS region) as analyzed by BLAST in the NCBI database. Oligonucletides used to code for the sense strand of siRNA included siRNA1 (5’-AAG ATCTCAATCTCGGGAATC-3’), siRNA2 (5’-CAGGTCCCCTAGAAGAAGAAC-3’), and control siRNAHK (5’-ACTACCGTTGTTATAGGTG-3’). All the plasmids constructed were confirmed by endonuclease digestion and DNA sequencing.

The human hepatoma cell line, HepG2.2.15, was maintained in Dubecco’s modified Eagle’s medium (DMEM) with 10% fatal bovine serum and 200 &mgrg/mL G418 in 5% CO2-humidified air as previously described[22]. Cells were cultur at a density of 3 × 105 cells per well in 6-well plates. Twenty-four hours after incubation, the cells were transfected with 4 &mgrg siRNA-expressed plasmid using the Lipofection 2000 reagent. We removed the medium, washed the cells with warmed PBS, and added fresh medium every 24 h. At 48, 72 and 96 h after transfection, culture media were collected and cells were harvested for HBV replication assay. All experiments were performed in triplicate and divided into five groups.

Detection of HBsAg and HBeAg

To assess the effects of RNAi on viral antigen expression, HBsAg and HBeAg levels in culture medium were measured with an enzyme-linked immunosorbent assay (ELISA) kit following its manufacture’s instructions.

Real-time PCR was performed to quantify the HBV DNA or cccDNA using a HBV fluorescence detection kit following its manufacturer’s protocol. For measurement of viral DNA, DNA was extracted from the culture supernatant using a QIAamp DNA mini kit. cccDNA was isolated from the transfection cells to quantify its level and examined every 24 h post-transfection according to its manufacture’s protocol. Reactions with no reverse transcriptase enzyme added were performed in parallel. The inhibition ratio of HBV DNA was calculated according to the formula: 1-log (treated sample fluorescent intensity)/log (control fluorescent intensity) × 100%.

To evaluate the dose-dependent effects of siRNA on HBV gene expression, a series of experiments were conducted in HepG2.2.15 cells transfected with different plasmids at the concentration of 2 &mgrg, 3 &mgrg and 4 &mgrg, respectively. The transfection cells were harvested and cell culture supernatant was collected 96 h post-transfection for further examination. Several parameters of HBV were measured including HBsAg, HBV DNA as described above.

RESULTS
Inhibition of the expression of HBsAg and HBeAg 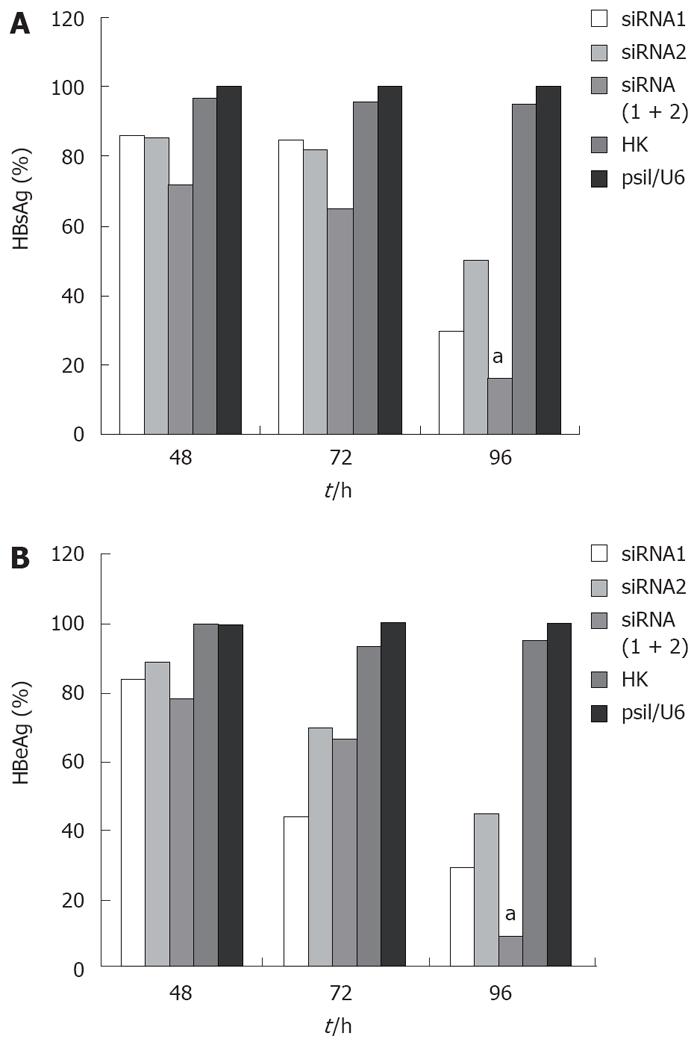 To determine whether viral mRNA is efficiently degraded by siRNA, RT-PCR was performed 48 h, 72 h and 96 h after transfection. The results demonstrated that the mRNA level of each tested siRNA was markedly reduced, whereas the empty plasmid had no effect on mRNA level (Figure 2). Combination therapy with all the siRNAs produced a stronger inhibition on viral transcripts compared with the therapy with one siRNA. The HepG2.2.15 cells treated with combined siRNAs for 96 h did not contain any detectable mRNA, whereas mRNA was abundant in cells treated with empty vector. 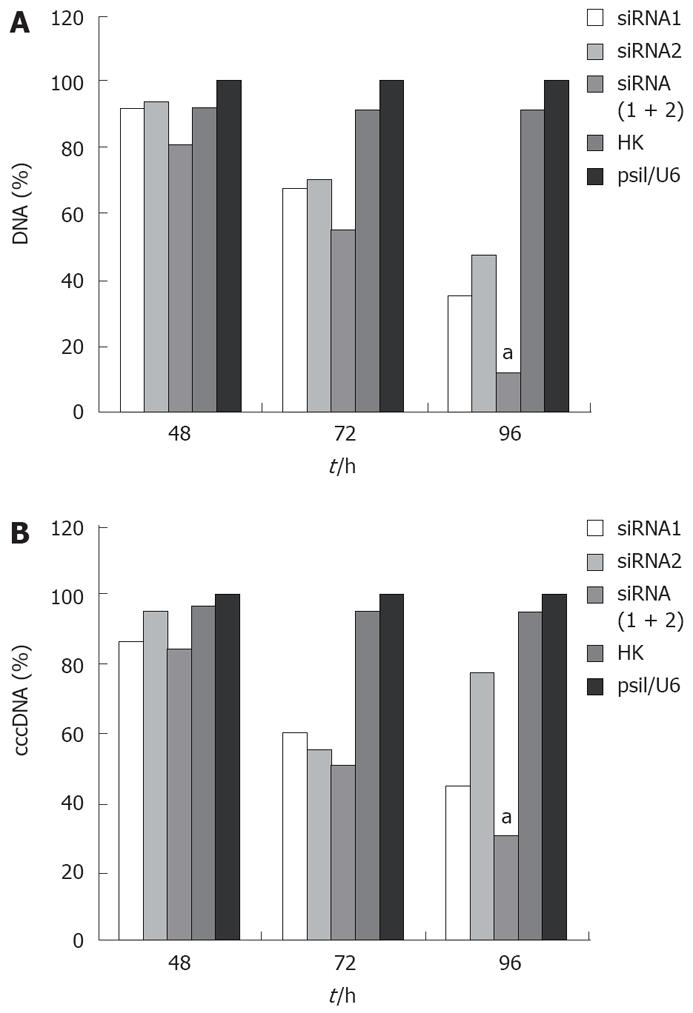 Figure 3 Inhibition of HBV DNA (A) and cccDNA (B) amplification after treatment with siRNA. aP < 0.05 vs siRNA1 or siRNA2.

HBV cccDNA is an important parameter in the therapy for chronic HBV infection. To evaluate if combination of siRNAs can effectively inhibit viral cccDNA, we isolated viral cccDNA from the transfected cells every 24 h post-trasfection. Quantitative assay revealed that HBV cccDNA levels were decreased by 50.4%, 22.31%, and 69.83% in the cells transfected with siRNA1, siRNA2 and siRNA (1 + 2), respectively, compared to the level of cells treated with empty plasmid 96 h post-transfection. Meanwhile, HBV cccDNA levels did not significantly change in cells treated with control siRNA and empty vector. As expected, the use of siRNA1 and siRNA2 synergistically suppressed the viral cccDNA activities compared with siRNA1 or siRNA2 alone (P < 0.05, Figure 3B). These results were reproducibly observed in three independent experiments.

Figure 4 Dose-dependent inhibitory effects of siRNA on HBV antigen HBsAg expression (A) and HBV replication (B). aP < 0.05 vs 2 &mgrg or 3 &mgrg.
DISCUSSION

Chronic HBV infection is one of the most serious diseases threatening human health. RNAi technology provides an alternative strategy to combat HBV infection[2324]. It was reported that viral mutations could escape single synthetic siRNA treatments, such as HBV, HCV and HIV[25–27]. One strategy to address the problem is to generate multiple siRNA molecules that can target different sites on the viral genome. The other is to choose target sequences in the relatively conserved region. Recently, combination therapy has emerged as a new approach to the treatment of chronic HBV infection with the objective to decrease the viral load to the lowest possible levels[2829]. This is then followed by a continued chemotherapy with another nucleotide analog or IFN-α in order to eliminate the remained viral load. Following the same strategy, we also investigated the effect of combination of siRNAs in comparison to monotherapy in HepG2.2.15 cells. As HBV infection is a pathological process involving multiple genes, it will be ideal to develop a combination strategy for siRNAs that can knock down the expression of multiple pathogenic viral antigens as well as inhibit viral replication. During the progress of combination therapy, several siRNAs may block multiple sites in viral genome and make it difficult to repair immediately, thus achieving greater suppression on HBV infection than a single siRNA.

The HepG2.2.15 cell line, a derivative of human HepG2 hepatoma cells, has been used as an in vitro stable HBV-producing model[22]. The cell line can be transformed with a head-tail dimmer of HBV DNA. Using this method, we could simulate the natural condition in which cells can still stably produce mRNA, antigen and viral particles. Specific siRNA targeting different sites on HBV NLS region were transfected and monitored in HepG2.2.15cells. As a result, the load of HBsAg, HBeAg, and mRNA was inhibited to some extent. Meanwhile, real-time PCR revealed that the number of viral DNA and cccDNA copies was markedly decreased. This inhibition was highly selective, sequence-specific and dose-dependent since control siRNA had almost no inhibitory effect on the expression or replication of HBV.

The selected siRNAs showed marked anti-HBV effects. Surprisingly, combination of siRNAs, compared with a single siRNA, exerted a stronger inhibition on antigen expression and viral replication, even though the final concentration of siRNA used in the therapy was the same. More importantly, combination therapy significantly suppressed HBV cccDNA amplification.

In summary, combination of siRNAs targeting various regions of HBV NLS inhibits viral replication and suppresses cccDNA amplication and can be used in the treatment of HBV infection.

Hepatitis B virus (HBV) is a major cause for acute and chronic hepatitis in humans. The development of an effective therapy for HBV infection is still a challenge. As HBV infection is a cellular infection involving multiple genes, progress in RNA interference (RNAi) has shed slight on developing a new anti-HBV strategy.

siRNA targeting HBV nuclear localization signal (NLS) can inhibit viral DNA synthesis and cccDNA amplification. In this study, the authors hypothesize that combination of siRNAs targeting different sequences along HBV NLS mediates greater inhibitory effects on cccDNA. If this is the case, it would be of significance in the treatment of HBV infection.

In this study, the selected siRNA showed marked anti-HBV effects. Surprisingly, combination of siRNAs, compared with a single siRNA, exerted a stronger inhibition on antigen expression and viral replication, even though the final concentration of siRNA used in the therapy was the same. More importantly, combination therapy significantly suppressed HBV cccDNA amplification.

Combination of siRNAs targeting various regions of HBV NLS not only inhibits viral replication, but also suppresses cccDNA amplification, indicating that it can be used in the treatment of HBV infection.

The effect of combination of siRNAs on suppressing HBsAg and HBeAg expression, and levels of HBV mRNA, DNA and cccDNA in vitro was studied in this study. This manuscript provides some important information about the treatment of chronic HBV infection. It is very interesting paper and has certain value.