Laparoscopic resection of rectal cancer or gastric cancer has been advocated for the benefits of a reduced morbidity, a shorter treatment time, and similar outcomes. However, simultaneous laparoscopy-assisted low anterior resection and distal gastrectomy for synchronous carcinoma of rectum and stomach are rarely documented in literature. Endoscopic examination revealed a synchronous carcinoma of rectum and stomach in a 55-year-old male patient with rectal bleeding and epigastric discomfort. He underwent a simultaneous laparoscopy-assisted low anterior resection and distal gastrectomy with regional lymph nodes dissected. The operation time was 270 min and the estimated blood loss was 120 mL. The patient required parenteral analgesia for less than 24 h. Flatus was passed on postoperative day 3, and a solid diet was resumed on postoperative day 7. He was discharged on postoperative day 13. With the advances in laparoscopic technology and experience, simultaneous resection is an attractive alternative to a synchronous gastrointestinal cancer.

Rectal and gastric cancers are sometimes diagnosed simultaneously as a synchronous carcinoma of rectum and stomach in a single patient. An enlarged open procedure combining both rectal resection and gastrectomy with a curable intention is normally performed for such cases, but a long operation time and severe surgical trauma often result in a reluctant recovery.

Laparoscopic resection is feasible and safe for both rectal and gastric cancers nowadays. It has been widely advocated for the benefits of a reduced morbidity and a shorter hospitalization time without sacrificing the oncological outcome. As this novel technique permits a multiple segmental resection, simultaneous laparoscopy-assisted low anterior resection and distal gastrectomy for a single patient have become attractive to a synchronous carcinoma of rectum and stomach. We present such a case.

A 55-year-old male patient presented with rectal bleeding and epigastric discomfort with alternation in bowl habit, mucus, and weight loss for 6 mo. Colonoscopy revealed a circumferential mass 8 cm from the anal verge, which was confirmed to be a rectal adenocarcinoma by biopsy. Meanwhile, gastroscopy revealed a 3 cm × 3 cm ulcerative lesion located at the lesser curvature near the pylorus, which was confirmed to be a signet-ring cell adenocarcinoma by biopsy. Computed tomography (CT) of the abdomen and thorax demonstrated no significant metastatic lesions. Various treatment strategies were discussed and the patient underwent simultaneous laparoscopy-assisted low anterior resection and distal gastrectomy (LADG) and D2 lymphadenectomy.

The operation was performed under general anesthesia. The patient was first at a Lloyd-Davis position to accomplish the low anterior resection, and then changed into a Trendelenberg position to complete the distal gastrectomy. We used the Veress method to establish pneumoperitoneum and maintain the intra-abdominal pressure at around 15 mmHg. Trocars for low anterior resection were placed. In brief, an umbilical port (10 mm) was used for a video scope (usually a 30-degree scope), and two ports were created for working in the right and left low quadrants of abdomen, with the lower port in the right quadrant for main working (12 mm) and the rest three for assistance (5 mm). When gastrectomy was performed, another 5 mm assistant port was made in the left subcostal region (Figure 1A). The main surgeon stood on the right of the patient and then between the split legs of the patient after completion of the low anterior resection. 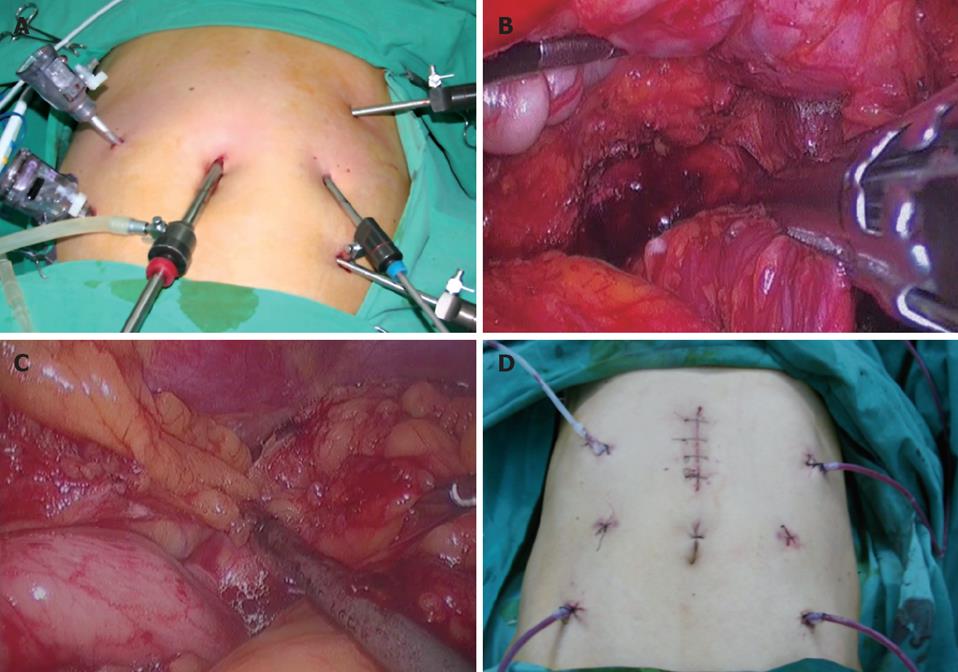 Figure 1 A: Position of the working ports; B: Transection of the rectum with a linear stapler; C: Dissection of short gastric vessels with harmonic scalpel; D: Placement of drainage tubes.

The right peritoneum was dissected along the iliac vessels with a harmonic scalpel, then the sigmoid colon and rectum as well as their mesenteries were mobilized down to the pelvic floor. The lymphovascular pedicle was ligated at the radical site of the inferior mesenteric vessel with a polymer plastic clip, while the distal rectum was transected intracorporeally with a laparoscopic linear stapler (Figure 1B). The first part of the operation was completed within 75 min.

The gastrocolic ligament was divided from the hepatic flexure towards the splenic flexure for gastric mobilization, while the gastroepiploic vessels and short gastric vessels were ligated simultaneously (Figure 1C). The gastrohepatic and duodenohepatic ligaments were then divided to allow ligation of the right and left gastric vessels. After completion of the whole procedure, the proximal stomach was entirely mobilized with an adequate perigastric lymphadenectomy. This part of the operation was accomplished within 2 h and 30 min, and the estimated blood loss was 120 mL.

A 5 cm median epigastric incision was made and protected with a plastic bag to ensure the transection of the two specimens. The bowels were then anastomosed intra-corporeally with a double stapler. The first portion of the duodenum and stomach body was transected with the gastrointestinal continuity performed in a Billroth-I fashion. Four protective drainage tubes were placed near the two anastomotic junctions (Figure 1D). The total operation time was 4 h and 30 min. The patient received parenteral analgesia for less than one day. Flatus was passed on postoperative day 3, the patent resumed a liquid diet on postoperative day 5 and a solid diet on postoperative day 7. No clinically significant complication occurred postoperatively and all the drainage tubes were pulled out consecutively. The patient was discharged 13 d after the operation. Pathologic examination of the rectum showed a moderately differentiated adenocarcinoma invading the subserosal tissue without breaching the serosa. The distal margin measured 2 cm, and no involvement of tumor was found in the mesenteric or paracolic lymph nodes. Pathological examination of the stomach showed a poorly differentiated adenocarcinoma invading the muscular layer, involvement of tumor was observed in 8 of the 20 lymph nodes (Figure 2). 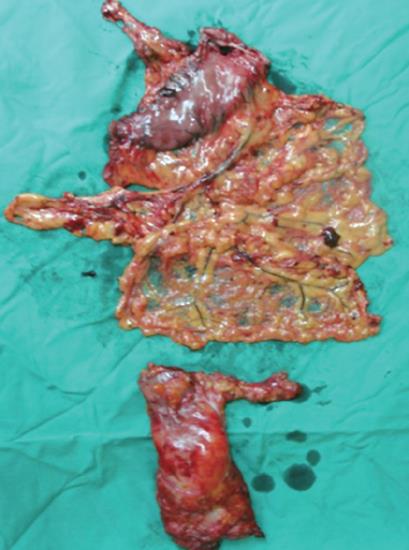 Synchronous gastrointestinal cancers are normally treated with conventional surgical approaches. In brief, a long medial incision from the xiphoid to the pubic symphysis is made to ensure the upper-abdominal and pelvic procedures, with a dissection of regional lymph nodes. These maneuvers might cause surgical traumas, and result in a slow postoperative recovery, with a negative influence on the prognosis of tumors. Laparoscopic technique provides a simultaneous resection of the rectal and gastric lesions and minimizes the surgical influence on human body. For the rectal procedure, the amplifying effect of laparoscopy helps the surgeons to identify and protect the ureter and automatic nerve plexus in a narrow pelvic cavity in spite of a bulky tumor and thickened mesentery. A 30-degree camera offers a multi-angle image, which greatly assists the surgeon to complete a TME approach as well as the intra-corporeal transection and anastomosis of the bowels[1]. For the gastric procedure, advanced laparoscopic instruments and materials, such as harmonic scalpel, multi-sized titanium or polymer clips significantly reduce the intra-operative hemorrhage. A broad view of the intra-peritoneal cavity under laparoscope facilitates the multi-plane manipulation of gastrectomy, especially during the dissection of the upper branches of perigastric vessels like short gastric vessels[2]. We transected the two specimens and reconstructed the upper gastrointestinal duct extra-corporeally with a manual method, which could obviously reduce the operation time and cost. To summarize, laparoscopic colorectal and gastric surgery is feasible and safe in clinical trials with the benefit of avoiding a second operation, thus reducing morbidity, and shortening the hospital stay without sacrificing the oncological outcome[34]. As some other radical surgeries for synchronous gastrointestinal cancers have also been reported, simultaneous laparoscopic approach obviously reduces the morbidity and recurrence rate[56].

To the best of our knowledge, this is the first report of simultaneous laparoscopy-assisted low anterior resection and distal gastrectomy for synchronous carcinoma of the rectum and stomach. A good recovery of the patient reveals that this technique is advantageous over the conventional approaches in treating gastrointestinal malignancies and broadens the indications for laparoscopic approaches. This minimally invasive technique may have a bright future.