Gastrointestinal involvement of endometriosis has been found in 3%-37% of menstruating women and exclusive localization on the ileum is very rare (1%-7%). Endometriosis of the distal ileum is an infrequent cause of intestinal obstruction, ranging from 7% to 23% of all cases with intestinal involvement. We report a case in which endometrial infiltration of the small bowel caused acute obstruction requiring emergency surgery, in a woman whose symptoms were not related to menses. Histology of the resected specimen showed that endometriosis was mainly prevalent in the muscularis propria and submucosa and that the mucosa was not ulcerated but had inflammation and glandular alteration. Endometrial lymph node involvement, with a cystic glandular pattern was also detected.

Endometriosis is characterized by the presence of functional endometrial tissue consisting of glands and/or stroma located outside the uterus[1]. It is a painful chronic disease occurring in 5%-15% of menstruating women[1–3].

GI involvement of endometriosis has been found in 3%-37% of women, most commonly in the sigmoid colon, rectum and terminal ileum[10–13].

We report a case in which endometrial infiltration of the small bowel caused acute obstruction, requiring emergency surgery. Diagnosis of ileal endometriosis was made by pathological examination of the resected specimen.

A 44-year old woman was referred to our unit because of diffuse abdominal pain, associated with diarrhoea alternating with constipation.

The patient began complaining of mild abdominal discomfort nine months earlier. Episodes of pain relapsed irregularly, lasted a few hours and were not related to menses. She had two normal labors at the age of 30 and 32 years, regular menses and no history of dyspareunia. No other symptoms were present. Her past medical history was unremarkable.

Three months earlier, evaluation by her primary care physician revealed normal blood tests, and an abdominal ultrasound examination was unremarkable. Faecal analysis was negative for both parasites and occult blood. Antispasmodic drugs were administered, but the patient experienced a progressive worsening of the cramping abdominal pain and the onset of constipation.

Physical examination showed mild diffuse abdominal tenderness. No abdominal masses or enlarged lymph nodes were noted. Auscultation detected an increase of bowel sounds and peristaltic rushes. Colonoscopy and abdominal computed tomography (CT) scan were planned. However, 48 h later, the patient required emergency admission for small bowel occlusion. Abdominal X-ray examination showed dilated loops of the small intestine with no air in the colon, and CT scan revealed an irregular mass involving the ileum with dilation of the small intestine. A colonoscopy was performed to refine the diagnosis. The colon was normal, but the ileum, at about 5 cm from the ileocecal valve, showed a tight extrinsic compression with intact mucosa.

Surgery was immediately carried out and an obstructing mass 5 cm in length involving the distal ileum was detected, with diffuse dilation of the small intestine. A right hemicolectomy with resection of 25 cm of ileum was performed. There was no evidence of macroscopic lesions in other abdominal and pelvic organs. The post-operative course was uneventful and the patient left the hospital 9 d later.

Histology of the resected specimen showed endometriosis involving the ileum and causing a stricture. The bowel wall was infiltrated, but the mucosa was not ulcerated. Endometriosis was mainly prevalent in the muscularis propria and submucosa. The mucosal involvement showed inflammation and glandular alteration (Figure 1). Immunocytochemistry with cytokeratin (CK) of different molecular weight (CK7 and CK20) was performed. Endometrioid glands and the intestinal epithelium were positive for CK7 and CK20, respectively (Figure 2). Endometrial lymph node involvement, with a cystic glandular pattern, was also detected (Figure 3). 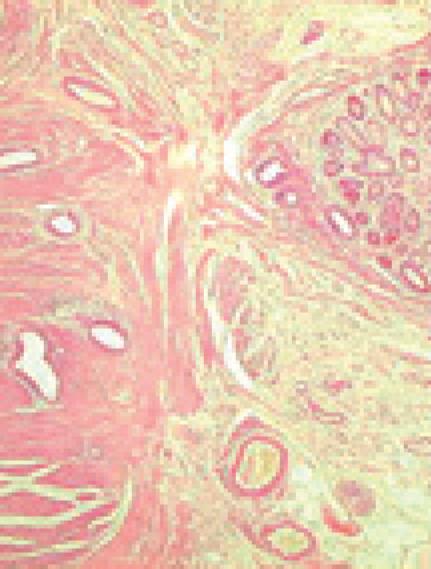 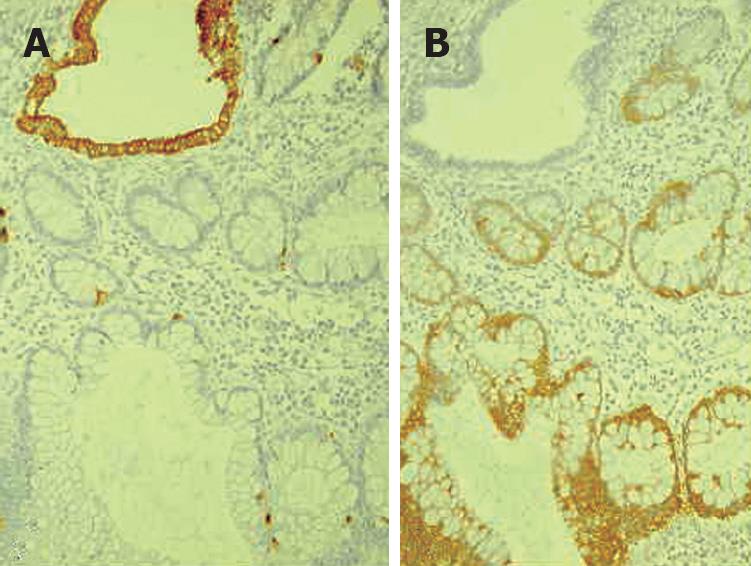 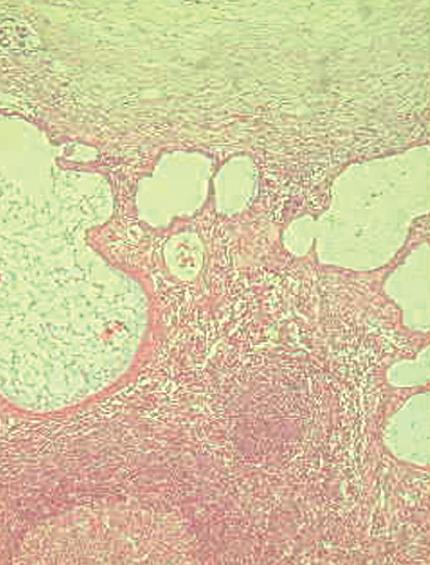 Endometriosis is a common disease of unknown etiology. Many theories have been proposed to explain this condition. The most widely accepted is Sampson’s retrograde menstruation theory: during menstruation, endometrial tissue refluxes through the fallopian tubes, implanting and growing on the serosal surface of abdominal and pelvic organs[1415].

Alternatively, extrauterine growth of endometriotic tissue could occur as a result of metaplastic transformation of pluripotential peritoneal mesothelium (Minh’s theory)[16].

Another theory implies the migration of cells through the lymphatic system or via hematogenous spread[17]. Donnez et al[18] hypothesized that endometrial nodules may develop from metaplasia of mullerian remnants. In some cases, they could result from iatrogenic displacement of the decidua during a caesarean section[19].

The “neurologic hypothesis” is a new concept in the pathogenesis of endometriosis: the lesions seem to infiltrate the large bowel wall along the nerves, at a distance from the primary lesion[20]. However, other factors, immunological, genetic and familial, could be involved in the pathogenesis of this disease[21–23].

Endometriosis usually becomes apparent in the reproductive years when the lesions are stimulated by ovarian hormones. Forty percent of the patients present symptoms in a cyclic manner, which are usually related with menses[24]. In our patient, symptoms relapsed irregularly and were not related with menses.

At present, superficial endometriosis is considered a normal phenomenon in women at the childbearing age, whereas deep infiltrative endometriosis (DIE) and endometrial ovarian cysts are the severe and painful manifestations of the condition[25]. DIE occurs in 30%-40% of the patients with endometriosis[26].

Pelvic pain, infertility and dyspareunia are the characteristic symptoms of the disease[25], but the clinical presentation is often non-specific.

Extra-pelvic endometriosis affects the GI tract of 5% of women with this condition[27]. The rectosigmoid is the most common site for intestinal endometriosis, accounting for 70% of all cases, while small bowel involvement, usually confined to the distal ileum, is less frequent (1%-7%) and exclusive localization on the ileum is very rare (1%-7%)[13]. Different incidence rates of endometriosis at different sites may be due to the fact that endometriosis is often an incidental finding at surgery[9].

In a review of 1000 women who underwent laparotomy for gynecological symptoms, Jubanyik et al[28] described 181 (18%) cases of GI endometriosis, but only one patient had small bowel involvement. Melody et al[29] reported distal ileum involvement in 35 out of 36 patients. In a radiologic study, Scarmato et al[30] detected endometriosis of the terminal and mid-ileum in four patients and one patient, respectively. Endometriosis in the jejunum[31] and proximal ileum has also been documented[32]. Anaf et al[20], considering bowel endometriosis an “infiltration or invasion phenomenon”, found that there is a histological continuity between the superficial and underlying deep lesions of the large bowel wall, suggesting that lesions originating from the serosa progressively invade the muscularis propria. The mucosa is rarely involved as it is poorly innervated. Pelvic, pericolonic and para-aortic lymph node involvement of endometriosis has also been reported, often coexisting with endometriosis of the bowel wall[33]. Lymph node involvement may be a consequence of lymphatic dissemination from endometrial foci in the intestinal wall[3435].

Symptoms are initially cyclical but may become permanent when the lesions progress.

Endometriosis infiltrating the muscularis propria may lead to localized fibrosis in the bowel wall, strictures, and small or large bowel obstruction[910].

The true incidence of endometriosis causing bowel obstruction is unknown[11], although complete obstruction of the bowel lumen occurs in less than 1% of cases[39].

Endometriosis of the distal ileum is an infrequent cause of intestinal obstruction, ranging from 7% to 23% of all cases with intestinal involvement[31334041].

The incidence of intestinal resection for bowel obstruction is 0.7% among patients undergone surgical treatment for abdominopelvic endometriosis[39].

In our case, as in others previously reported in the literature, it was impossible to establish a timely and accurate preoperative diagnosis for the vagueness of symptoms, similar to other cases of bowel obstruction.

Rarely, intestinal endometriosis may occur with perforation[4445]. Malignancy has been reported in 0.7%-1% of patients and 78.7% of the cases occur in the ovary[46]. The colorectum is involved in only 5% of patients[47].

The differential histologic diagnosis of endometrioid adenocarcinoma (AC) and colonic AC is difficult because colonic AC has a significant mucosal component, while endometrioid AC usually involves the outer layers of the colon[454748]. Immunohistochemical staining for CK7 and CK20 seems to be useful in differentiating colonic and endometrioid AC[4950]. Approximately, 75%-95% of primary colonic AC cases have a CK7-negative and CK20-positive phenotype, whereas 80%-100% of endometrial AC cases have a CK7-positive and CK20-negative phenotype[50]. Although endoscopic diagnosis of colonic endometriosis has been reported[51], the mucosa is usually normal or shows minimal mucosal abnormalities[454748], friability[52], extrinsic process or fibrosed stenoses[53].

Rectal bleeding may be caused by mucosal injury during the passage of stools through a stenosed colon with the intramural endometriotic tissue increased at the time of menses if it occurs. Colonic mucosa heals rapidly and no signs are detectable at endoscopy[54].

Endoscopic biopsies usually yield insufficient tissue for a definitive pathologic diagnosis as endometriosis involves the deep layers of the bowel wall. Endometriosis can induce mucosal changes without any specific pattern, which mimic findings of other diseases such as inflammatory bowel disease, ischemic colitis or neoplasm[55].

Radiologically, lesions of endometriosis are either of constricting and polypoid type or both[54]. On barium studies, radiographic findings caused by implants in the ileum are similar to those in the colon. Rectosigmoid or cecal endometriosis on double contrast barium enema studies is seen as an extrinsic mass with spiculation and tethering of folds[3056].

The diagnosis of endometriosis may be suspected on the basis of the clinical history[30]. Less than 50% of patients have concurrent pelvic endometriosis[57].

CT is not the primary imaging modality for evaluation of bowel endometriosis, although it can occasionally demonstrate a stenosing rectosigmoid mass[58].

Multislice CT (MSCT) has a great potential for detecting alterations in the intestinal wall, especially if it is combined with enteroclysis (MSCTe). Biscaldi et al[59] carried out a study on 98 women with symptoms suggestive of colorectal endometriosis and MSCTe identified 94.8% of bowel endometriotic nodules.

Magnetic resonance imaging (MRI) has a high sensitivity (77%-93%) in the diagnosis of bowel endometriosis[6061].

The depth of rectal wall infiltration by endometriosis is poorly defined by MRI. A combination of MRI and rectal endoscopic ultrasonography (EUS) has recently been proposed[62]. When retroperitoneal infiltration is present, it is mandatory to know if the bowel wall is involved in order to identify patients requiring bowel resection.

There is a great interest in the use of serum markers to diagnose endometriosis, but they are not sufficiently accurate for use in clinical practice[65].

Cancer antigen CA-125 has been used to monitor the progress of endometriosis[66]. CA19-9 has a lower sensitivity than CA-125, and cytokine interleukin-6 may be more sensitive and specific than CA-125.

Surgery is the choice of treatment for intestinal endometriosis in most cases. For the accidental finding without symptoms of obstruction, hormone therapy with danazol or gonadotrophin-releasing hormone (GnRH) analogs may be considered[9]. Surgical treatment should be indicated for women with pain, bleeding, changes in bowel habits and intestinal obstruction[51]. In the small bowel, the treatment of endometriosis is surgical resection of the involved bowel, while medical therapy is only a temporary treatment[12].

Intestinal endometriosis may be active in the peri- and post- menopausal years and even surgery may be necessary for these patients[54].

In this paper, we report an unusual presentation of endometriosis characterized by abrupt onset of small bowel occlusion. The present report points out that endometriosis remains a challenging condition for clinicians, especially, as in our case, when the symptoms are not related to menses. Intestinal endometriosis should be considered in patients with epigastric, abdominal and/or pelvic pain, in conjunction with signs of obstruction.