The three major immune disorders of the liver are autoimmune hepatitis (AIH), primary biliary cirrhosis (PBC) and primary sclerosing cholangitis (PSC). Variant forms of these diseases are generally called overlap syndromes, although there has been no standardized definition. Patients with overlap syndromes present with both hepatitic and cholestatic serum liver tests and have histological features of AIH and PBC or PSC. The AIH-PBC overlap syndrome is the most common form, affecting almost 10% of adults with AIH or PBC. Single cases of AIH and autoimmune cholangitis (AMA-negative PBC) overlap syndrome have also been reported. The AIH-PSC overlap syndrome is predominantly found in children, adolescents and young adults with AIH or PSC. Interestingly, transitions from one autoimmune to another have also been reported in a minority of patients, especially transitions from PBC to AIH-PBC overlap syndrome. Overlap syndromes show a progressive course towards liver cirrhosis and liver failure without treatment. Therapy for overlap syndromes is empiric, since controlled trials are not available in these rare disorders. Anticholestatic therapy with ursodeoxycholic acid is usually combined with immunosuppressive therapy with corticosteroids and/or azathioprine in both AIH-PBC and AIH-PSC overlap syndromes. In end-stage disease, liver transplantation is the treatment of choice.

The term “overlap syndrome” is used to describe variant forms of autoimmune hepatitis (AIH) which present with characteristics of AIH and primary biliary cirrhosis (PBC) or primary sclerosing cholangitis (PSC). Standardization of diagnostic criteria for overlap syndromes has not been achieved so far, since these disorders are uncommon. It remains unclear whether these overlap syndromes form distinct disease entities or are only variants of the major immune hepatopathies[12].

Overlap syndromes should always be considered once an autoimmune liver disease has been diagnosed[1]. Patients with overlap syndromes usually present with nonspecific symptoms, including fatigue, arthralgias, and myalgias. A hepatitic biochemical profile typically coexists with cholestatic laboratory changes[34]. Inter-estingly, transitions from one to another autoimmune hepatopathy have also been reported and are discussed together with the overlap syndromes[56]. Overlap of autoimmune cholangitis (AMA-negative PBC) and AIH has been described anecdotically and is discussed together with AIH-PBC overlap syndromes. Although combined features of both PBC and PSC have been reported in single cases[7], there is no clear evidence for the existence of an overlap of PBC and PSC.

This article is an extension of a recent review[10] and discusses current views and controversies on overlap syndromes. A case report is included to exemplify the typical features of an AIH-PBC overlap syndrome.

The diagnostic criteria of AIH, PBC and PSC are discussed in detail in this issue of the World Journal of Gastroenterology and are therefore just summarized briefly, since they are the basis for the diagnosis of the respective overlap syndrome.

The diagnosis of AIH depends on several descriptive criteria which were summarized and updated by the International AIH Group (IAIHG) in 1999[11]. A definite diagnosis requires exclusion of other major causes of liver damage, including alcoholic, viral, drug- and toxin-induced, and hereditary liver disease. The scoring system includes characteristic laboratory features (hepatitic serum liver tests, the presence of elevated serum IgG or γ-globulins and of serum autoantibodies), histocompatibility leucocyte antigen (HLA) associations, a portal mononuclear cell infiltration and interface hepatitis in the liver tissue and a positive treatment response to corticosteroids[11].

The diagnosis of PBC is based on a cholestatic serum enzyme pattern, serum antimitochondrial antibodies (AMA) and/or PBC-specific AMA-M2, and a compatible histology. Although elevated serum IgM is characteristic for patients with PBC, it is not regarded mandatory to establish the diagnosis[1213]. PBC is frequently associated with other autoimmune disorders, like Sjögren’s syndrome, Hashimoto thyroiditis, and celiac disease.

PSC is a rare chronic cholestatic disease of the liver and bile ducts that is generally progressive and leads to end-stage liver disease. In contrast to PBC, twice as many men as women are affected. PSC is diagnosed most frequently in patients aged between 25 and 40 years[14]. Criteria for the diagnosis of PSC include cholestatic serum enzyme pattern, typical cholangiographic findings of bile duct stenoses and dilatations and histologic findings compatible with PSC showing mild to moderate portal infiltration[1415]. Concomitant inflammatory bowel disease is found in 70%-90% of the patients and atypical perinuclear antineutrophil cytoplasmatic antibodies (pANCA) are detected in more than 70% of the patients[16].

PBC and AIH are the most frequent autoimmune hepatopathies with a prevalence of 25-40/100 000[1718] and 17/100 000[19], respectively, in recent epidemiologic studies in Europe and the United States and female gender predominates in both AIH (80%) and PBC (90%-95%). Serum liver tests typically show a hepatitic pattern in AIH and a cholestatic pattern with marked elevation of aP and γ-GT, but mild elevation of serum transaminases in PBC. While serum IgG is the predominant immunoglobulin elevated in AIH, serum IgM is elevated in most patients with PBC.

Patients presenting with clinical, biochemical, serological and histological features of both diseases have been reported since the 1970s[2021]. Later, the term “overlap syndrome” was used to describe these conditions, although there was no common definition or uniformly accepted diagnostic criteria for this[2223]. Two extended analyses provided evidence for AIH-PBC overlap in 8% of 199 patients with AIH (n = 162) or PBC (n = 37)[1] and in 9% of 130 patients with PBC[5]. In the latter study, an AIH-PBC overlap syndrome was accepted when 2 or 3 criteria for PBC and AIH were fulfilled[5] (Table 1). Although these diagnostic criteria for an AIH-PBC overlap syndrome are not validated and their sensitivity has not been established, they provide a diagnostic template that can be consistently applied[4].

In addition to AIH-PBC overlap syndrome, some patients presented with typical features of PBC or AIH[528]. A well-defined series of 12 patients with PBC followed by AIH was described in 282 PBC patients[29]. The time interval between the diagnosis of PBC and the diagnosis of AIH varied from 6 mo to 13 years. Of importance, patients with multiple flares of hepatitis at the time of diagnosis of AIH had already developed cirrhosis on liver biopsy[29]. Remission was achieved in 80% of the patients who received additional immunosuppressive therapy. This case series emphasizes the possible role of AIH in the deterioration of liver function in PBC patients unless diagnosis is made early and steroid therapy is administered. This study suggested that these patients may have two coincident autoimmune diseases rather than a variant of PBC or AIH[29]. A recent retrospective analysis indicated that patients with AIH-PBC overlap syndrome might have worse clinical outcomes compared to patients with PBC alone[30]. However, this conclusion is somewhat controversial, since the treatment was not standardized and no difference was found when the diagnostic criteria proposed by Chazouilleres et al[5] were applied in this cohort of patients.

A 57-year-old woman presented to our outpatient clinic in May 2007 for evaluation of abnormal serum liver tests. She reported fatigue and slight pruritus, but was otherwise in good general health. In January 2007, elevated serum liver tests were detected for the first time when she went for a routine medical examination. At presentation, serum liver tests revealed elevated γ-GT (2 × N), elevated transaminases (AST 2.5 × N, ALT 5.5 × N), and normal bilirubin. Serum AMA (1:3840) and AMA-M2, ASMA and SLA were positive, whereas ANA, LKM1 and ANCA were all negative. Her immunoglobulins showed elevated IgG (23.2 g/L) and IgM (3.3 g/L). Metabolic and viral liver diseases were ruled out. A liver biopsy disclosed an interface hepatitis and mild portal fibrosis without evidence of cirrhosis (Figure 1). AIH-PBC overlap syndrome was diagnosed and a combined therapy of UDCA (13-15 mg/kg daily ) and budesonide (6 mg/d) was initiated. Two weeks later, her transaminases decreased by 50% and azathioprine (100 mg/d) was administered. After 3 mo of combined therapy, all serum liver tests were normal and budesonide was tapered to 3 mg/d. At the last follow-up visit in August 2007, the patient reported an improved general condition, and fatigue and pruritus disappeared. 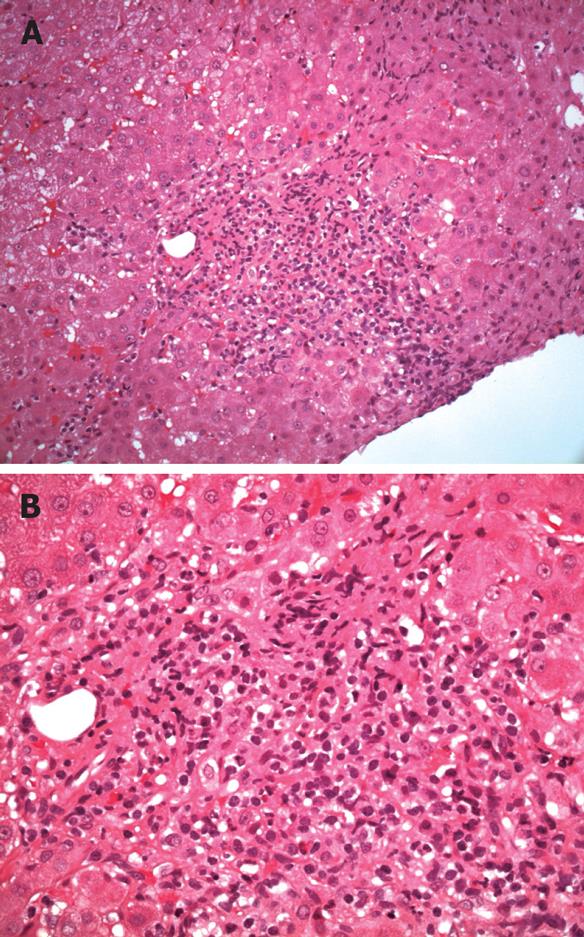 AIC shares many features with PBC and is therefore also called AMA-negative PBC. Like PBC, it is characterized by a female preponderance, a cholestatic serum enzyme pattern and florid bile duct lesions on histology and it slowly progresses to fibrosis and cirrhosis of the liver if left untreated[35]. Patients with AIC are AMA negative and often present with serum ANA and/or ASMA. Several studies support the view that AIC and PBC are variants of one single disease only differing in serum autoantibody pattern[36–38]. Twenty-two of 30 patients with AIC (AMA-negative PBC), but none of the 316 controls, were positive in a new AMA-M2 recombinant assay which detected autoantibodies directed against human E2 members of the 2-oxo acid dehydrogenase complex family[36]. In addition, immunohistochemical studies showed that PDC-E2 immunoreactivity was expressed on apical membranes of biliary epithelial cells not only in patients with PBC, but also in 7 of 9 patients with AIC[37]. Treatment response to UDCA (13-15 mg/kg daily) and outcome of liver transplantation in end-stage disease were also similar in patients with AIC and those with PBC[3940]. Thus, these data indicate that a majority of AIC patients (when defined as AMA-negative PBC) suffer from “true” PBC.

Concomitant features of AIH and AIC have been reported in single cases. An AMA-negative woman presented with features of an AIH-AIC overlap syndrome based on the presence of hepatitic and cholestatic biochemical changes and interface hepatitis as well as bile duct lesions on histology. In analogy to the therapy of AIH-PBC overlap syndrome, this patient responded to a combined treatment with UDCA and immunosuppressors[41].

The largest case series of AIH-PSC overlap syn-dromes in children and adolescents was published by colleagues from the Kings’ College in London[44]. In this prospective study, a group of 55 children was followed up for 16 years who showed clinical, biochemical, and histological signs of AIH. In 27 of the 55 children, cholangiographic findings were typical of sclerosing cholangitis, whereas other signs and symptoms were characteristic of AIH. Therefore, the term “autoimmune sclerosing cholangitis” (ASC) was proposed for this AIH-PSC overlap syndrome. Patients with ASC more commonly suffered from inflammatory bowel disease and more often were positive for ANCA in serum than those with AIH. Serum transaminases tended to be higher in AIH, but serum alkaline phosphatase although mostly elevated in PSC was normal at several occasions in both diseases. Thus, AIH and ASC may belong to the same disease process and may overlap with PSC.

Increasing awareness for the AIH-PSC overlap syndrome has led to the observation that AIH and PSC may be sequential in their occurrence, and this has first been described in children[44]. More recently, a similar observation has been reported in a small case series of 6 adults (mean age 31 years; 4 male; 3 with ulcerative colitis) who developed biochemical and cholangiographic features of PSC after an average of 4.6 years of a diagnosis of AIH and became resistant to immunosuppressive therapy[6]. Thus, in patients with AIH who become cholestatic and/or resistant to immunosuppression, PSC should be considered and ruled out.

Ursodeoxycholic acid (UDCA) is widely administered in PSC due to its beneficial effects on serum liver tests, histological features, prognostic surrogate markers, and development of colonic dysplasia associated with accompanying ulcerative colitis, although long-term efficacy of UDCA still remains unproven[48–52]. UDCA at higher doses (> 20 mg/kg daily) may be superior to standard doses for patients with PSC[53] and has also been used in the treatment of AIH-PSC overlap syndrome[4752]. UDCA has been used in combination with immunosuppressive drugs in AIH-PSC overlap syndrome, and the long-term course was considered favorable[4447]. Thus, UDCA in combination with an immunosuppressive regimen may be an adequate medical treatment for most patients with AIH-PSC overlap syndrome although data from controlled trials are lacking. Liver transplantation should be considered in late-stage diseases.