Abscess of the spleen is a rare discovery, with about 600 cases in the international literature so far. Although it may have various causes, it is most usually associated with trauma and infections of the spleen. The latter are more common in the presence of a different primary site of infection, especially endocarditis or in cases of ischemic infarcts that are secondarily infected. Moreover, immunosuppression is a major risk factor. Clinical examination usually reveals a combination of fever, left-upper-quadrant abdominal pain and vomiting. Laboratory findings are not constant. Imaging is a necessary tool for establishing the diagnosis, with a choice between ultrasound and computed tomography. Treatment includes conservative measures, and surgical intervention. In children and in cases of solitary abscesses with a thick wall, percutaneous catheter drainage may be attempted. Otherwise, splenectomy is the preferred approach in most centers. Here, we present three cases of splenic abscess. In all three, splenectomy was performed, followed by rapid clinical improvement. These cases emphasize that current understanding of spleen abscess etiology is still limited, and a study for additional risk factors may be necessary.

Abscess of the spleen is a rather rare clinical entity. About 600 cases have been described so far in the international literature[1]. Most of these refer to patients with recognized risk factors. These include the synchronous presence of conditions that compromise the immune system, such as endocarditis, diabetes mellitus, congenital or acquired immunodeficiency and the administration of immunosuppressive medication (e.g. post-transplantation or as part of the treatment of connective tissue disorders)[2–5]. Trauma is an additional predisposing factor for splenic abscesses[6]. Instances of splenic abscesses are relatively increased among intravenous drug addicts. On the other hand, splenic abscesses are most uncommon in the general population. From an epidemiological point of view, they are more frequently detected in middle-aged and older individuals, with no obvious preference for either sex[1–3].

The clinical manifestations of splenic abscesses usually include abdominal pain, exclusively located or, at least, more intensely described in the upper-left-quadrant area. Fever, nausea, vomiting and anorexia may be also present in various combinations[7–9]. Laboratory findings are consistent with the acute phase of infection, but their exact nature is determined by the pathogen isolated from the abscess[1011]. The most common pathogens detected include Staphylococcus and Streptococcus[212]. Imaging by common abdominal X-ray or ultrasound may be suggestive, but the lesion is usually revealed via computed tomography (CT). Due to the seriousness of the potential implications, including a threat to life itself, the most usual treatment currently applied is splenectomy, which is followed by rapid clinical improvement[13–15].

A 45-year-old man presented to our hospital’s outpatient clinic with persistent pain in the upper-left-quadrant area of the abdomen. He was working as a clerk, having previously spent 10 years as a member of embassy personnel in Africa. The referred pain had initiated about 1 mo previously, with periods of temporary improvement and relapse. The pain was not altered after food intake or sleep. The patient recognized no other major symptoms, such as vomiting, nausea or fever. Moreover, the patient was not treated for any other disease at the time (including recent infection or operation), nor had he ever been admitted to the hospital in the past. Clinical examination reproduced localized sensitivity in the area of the spleen, with no other significant findings. Laboratory testing (standard hematological and biochemical controls) revealed a mild increase in the number of leukocytes, which was otherwise within the normal range. Blood and urine cultures failed to reveal any pathogens. Imaging included chest and abdominal X-ray, followed by a CT scan of the upper abdomen. The latter detected a large abscess of the spleen, of an average size of 8 cm × 4 cm (Figure 1). Aspiration of the abscess was performed under CT guidance and the material obtained was cultured, which led to the development of several colonies identified as Streptococcus spp. No other pathogen of any kind was detected in the cultures. Owing to the abscess being symptomatic and of considerable size, the decision to perform splenectomy was made. The operation was completed successfully (Figure 2). Follow-up 1 year later has revealed a completely asymptomatic postoperative period. 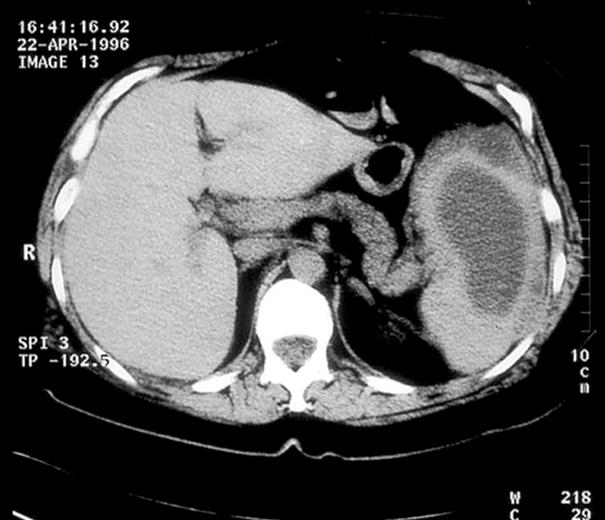 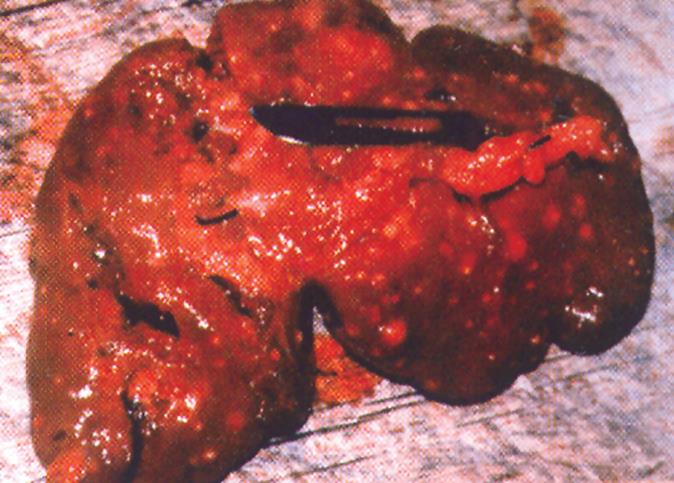 Figure 2 Macroscopic image of the dissected spleen. Notice the extent of the pathological tissue.
Case 2

A 50-year-old woman visited the outpatient clinic of our hospital with referred acute abdominal pain, which was not related to dietary habits and/or sleep. She also reported mild fever for about 1 wk (up to 38.5°C). Prior to surgery, she had been evaluated by a physician at the internal medicine clinic, who reported no clinical findings other than localized pain in the left-upper-quadrant area of the abdomen. Our clinical examination verified this finding. The patient had no history of recent infection or surgery, nor had she received medication of any kind. Moreover, she did not suffer from diabetes, human immunodeficiency virus (HIV) infection, or any other condition that would justify a degree of immunosuppression/immunocompromise. Laboratory testing was performed, which showed signs of on-going bacterial infection (leukocytosis, increased C-reactive protein and fibrinogen, and a mild decrease in blood albumin). Blood and urine cultures failed to reveal microbial infection. Imaging was also performed, including thoracic and abdominal X-ray, followed by CT of the upper and lower abdomen. The latter detected a single, small abscess of the spleen of 3 cm × 3 cm (Figure 3A). Subsequently, percutaneous aspiration of the lesion was performed and the material was sent for culture. The microbiological report referred to the presence of Staphylococci, a rather common finding in splenic abscesses. Due to the symptomatic nature of the lesion, the patient was advised to undergo surgical treatment, which she accepted. She was operated a week later and total splenectomy was performed under general anesthesia. A follow-up session took place 1 year after the operation, which revealed complete resolution of all symptoms. The patient has remained asymptomatic ever since. 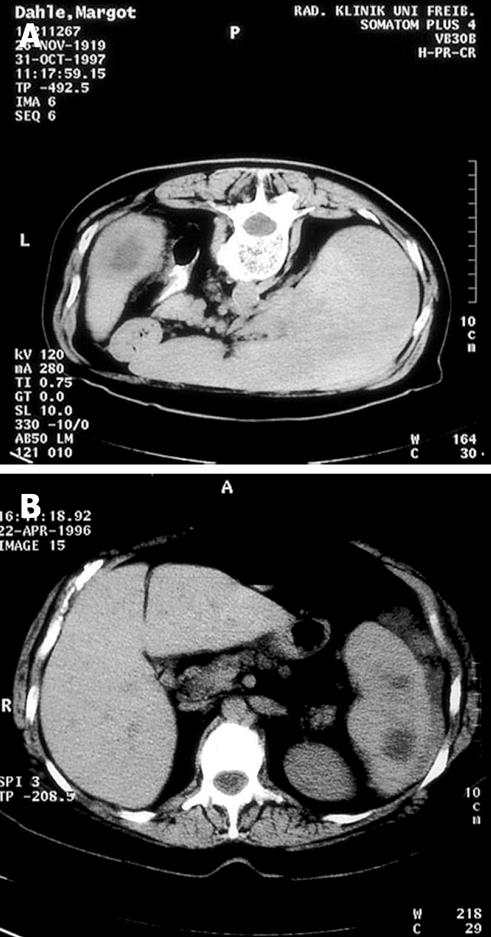 Figure 3 A: CT scan of a 50-year-old woman. The spleen contained a single abscess of 3 cm × 3 cm; B: CT scan of a 40-year-old male sailor, which featured multiple splenic abscesses.
Case 3

A 40-year-old male sailor visited our hospital as part of a yearly check-up, as instructed by his employers. During a brief review of his medical history, he mentioned a persistent chronic pain in the upper-left quadrant of the abdomen. The pain was not directly related to food intake or sleep, although it was occasionally combined with mild episodes of nausea and anorexia. Moreover, the patient referred to moderate fever (up to 38.8°C) that had occurred 3-4 times in the past 3 mo, each time lasting for about 3 d, and retreated after the use of non-steroidal anti-inflammatory drugs, administered every 6 h. The patient also had a long history of infections of the respiratory and gastrointestinal tracts, although he reported that all of these had been treated successfully, leaving no remnant disease. Clinical examination revealed nothing significant, other than sensitivity in the abdomen, which was more intense in the upper-left quadrant. Laboratory findings were consistent with acute-phase reaction (leukocytosis, and increased acute-phase proteins). Imaging included thoracic and abdominal X-ray, abdominal ultrasound, and finally, CT. The latter revealed multiple abscesses in the spleen (Figure 3B). No abscesses were detected via imaging in any other organ examined, including the liver. Cultures from blood and urine samples were negative, but the sample obtained from the abscesses themselves developed numerous colonies of bacteria identified as Streptococcus spp. Evaluation of the clinical condition, laboratory and imaging data, as well as professional danger (minimal access to immediate medical referral in case of an emergency), led to the decision to perform splenectomy (Figure 4). The surgery was completed without any complications and the patient has been found healthy and free from all referred symptoms to this date. 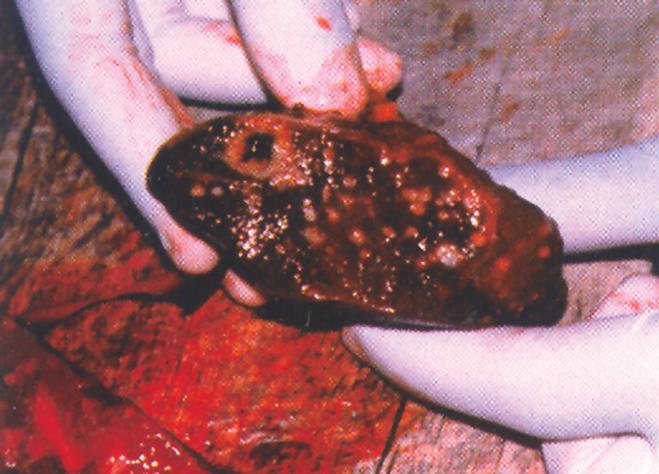 Abscesses of the spleen are rather rare, especially in developed countries in which the frequency of parasitic infections is low[213–17]. From this point of view, the random discovery of three such cases in a single Greek hospital in the course of two years may at first appear to signify an increased incidence. However, this may be misleading, since our hospital is a tertiary medical referral center for a densely populated area of about 4 million citizens. Moreover, it is closely located to the central port of the country, Pireaus, which makes access for foreign visitors, immigrants and Greeks returning from high-prevalence countries particularly easy[18]. Indeed, in case 3, the subject was a sailor and in case 1, there was a history of residence in Africa.

The age of the individuals in our small series is 40-50 years, which is consistent with the peak age group for initial diagnosis of splenic abscesses described in the literature[3491920]. However, it should be noted that in all three cases, medical care was only infrequently demanded prior to consultation by our department and therefore, it might be suggested that the disease evolved over a considerable time prior to our diagnosis. The personal history of long-term presence abroad strengthens this assumption.

The clinical manifestations, and laboratory and imaging findings in all three individuals were similar, although some variety was definitely observed (e.g. presence, height and duration of fever, abdominal pain characteristics and blood leukocyte count). In fact, all the symptoms described by the patients are included in the most frequent clinical findings lists provided by other reported studies, which proves that the current general understanding of the disease’s pathophysiology is reasonably accurate[11021].

Perhaps the most interesting parameter in our three cases of splenic abscess, however, is the lack of any obvious risk factors in any of the individuals[2223]. Indeed, a detailed medical history and clinical examination were performed initially and post-diagnosis, in an attempt to reveal any of the factors known to be associated with the development of abscesses in the spleen and other organs. However, no such findings occurred, with the only exception of potential occupational risk in cases 1 and 3. This discovery, along with the detection of common pathogens in the abscess itself (Streptococcus and Staphylococcus spp., respectively), may imply that further factors, apart from those already described, must contribute to the etiology of the disease[61024]. Their exact nature and involvement in immunity modification and regulation of the reaction to infectious agents remains to be determined in future[20].

As far as treatment is concerned, our department proceeded to classic total splenectomy in all three cases discussed. This led to rapid and complete relief from all disease-associated symptoms, without any major complications. This policy is still considered the standard of care for splenic abscesses[16]. However, more recent studies have also referred to alternative options, including laparoscopic splenectomy and spleen-preserving protocols, such as percutaneous imaging-guided drainage[1152526]. These methods are minimally invasive and are expected to result in smaller operative risk and overall treatment period, although of course this may differ according to the exact cause of the abscess[27–31]. Although initial results from the application of these novel methods are most promising and the potential advantages most welcome, current experience is still rather limited to justify their place in splenic abscess treatment. Therefore, the current policy is to limit their use in centers with adequately trained surgeons and only for a selected subgroup of patients.