AIM: To investigate the correlation between the changes of pancreatic enzyme, the biochemical markers and the clinical results according to the Balthazar computer tomography (CT) grade.

METHODS: Between July 2004 and July 2005, we reviewed the charts of 119 patients who were admitted to our hospital with acute pancreatitis.

CONCLUSION: In conclusion, our study suggests that the CRP with the radiological severity may be used to estimate the severity of acute pancreatitis.

The diagnostic markers (pancreatic enzymes such as amylase and lipase) and the risk factors that affect the clinical outcome are not well established by the previous clinical studies[5–7]. However, we have reservations about any correlation of various diagnostic markers, including pancreatic enzymes and the clinical features, to the outcome of acute pancreatitis. Further, the recent development of radiological diagnostic instruments allows for a more accurate diagnosis and easier follow up[8–10]. So in this study, we determined the correlation between the levels of pancreatic enzyme and the radiological severity of acute pancreatitis.

Between July 2004 and July 2005, we reviewed the records of 119 patients who were admitted to Chung Nam National University Hospital with acute pancreatitis. The diagnosis of acute pancreatitis was based on typical symptoms, including acute abdominal pain and a serum amylase level that was three times higher than the normal limit. After diagnosis is established, computed tomography (CT) scanning was performed to determine the findings and grade of disease. We excluded cases which the CT scan was not performed. We reclassified the CT grade into three groups. Group 1 was CT grade A + B, group 2 was CT grade C and group 3 was CT grade D + E. Serum amylase and lipase levels, the equivalent series resistance (ESR), and C-reactive protein (CRP) were tested and measured at admission, and again at 24, 48 and 72 h after admission. Also, the Ranson score and APACHE II score were calculated at the same time. The above markers were also measured when the patients started their oral diet. Abdominal CT was performed weekly to evaluate the change of severity of pancreatitis before starting an oral diet. We evaluated the correlation of these various factors and the clinical severity of acute pancreatitis.

Each result was calculated as a mean value and standard error. We analyzed the data using the SPSS 13.0 for windows. Chi-square tests, Student t-test, One-Way ANOVA test and MANOVA tests were used. For the different scoring systems, the sensitivity, specificity and overall correctness of prediction, the positive and negative predictive values and the likelihood ratios of the positive and negative tests were determined. Each score value obtained from the different scoring systems was used to calculate the different true positive (sensitivity) and false positive (1-specificity) rates to create the ROC curves. A P value less than 0.05 was considered a statically significant result.

Early elevation of serum pancreatic enzyme showed a statically significant result for the severe pancreatitis group. In this group, 3 of the patients’ initial serum lipase concentrations were higher than that of the other groups and this decreased more rapidly during 24 h (P = 0.008) after admission. The serum albumin level, BMI and Ranson score are known to be predictive risk factors for acute pancreatitis, but in our study, they did not correlate with the CT grade. 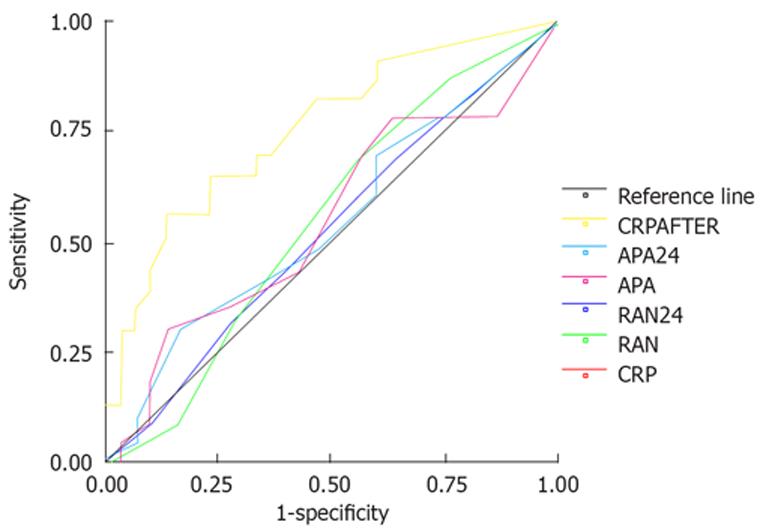 Acute pancreatitis arises from a variety of causes. The process of this disease varies from mild to severe necrotic pancreatitis. Most of these patients recover through the conservative management[1112]. But, a few patients progress to pancreatic necrosis and multi-organ dysfunction. In this study, the mortality was very high and near 30%[13].

There was no gold standard therapy for acute pancreatitis except for conservative management such as fasting and injection of analgesics. Therefore, prediction of severity has not yet been important for the treatment of acute pancreatitis. However, this will be an important task in the future for the preventive and treatment of complications because various drugs and therapy strategies are now being tried[6].

We know that various methods have been used to predict the progress of acute pancreatitis, such as clinical evaluation (include multivariate analysis of the prognostic factors), radiological evaluation via abdominal CT, and testing of various serological markers[14–18]. The development of abdominal CT allows precise estimation of the severity of pancreas and retroperitoneal lesion. Furthermore, changes of parenchymal necrosis are now being evaluated using a dye that shows the changes of the microcirculation in the pancreas. Abdominal CT was recently used for determining the presence and diagnosis of complications in acute pancreatitis[8919]. The CT grade has shown good correlations with the clinical course and the prediction of mortality, so this is good method as compared to multivariate estimation of different factors[1720]. In our study, the CT grade was a more predictive method for the clinical course, that is, the higher the radiological grade, the longer the pain duration, the fasting duration and the hospital stay. But, those factors that represent the progress of acute pancreatitis have limitations.

On the univariate analysis, the factors that affected the radiological grade were the leukocyte count at admission, the hemoglobin level, the total bilirubin concentration, serum lipase, CRP and the follow up CRP. The serum lipase concentration was used to diagnose acute pancreatitis due to its high specificity and sensitivity, but it cannot predict disease prognosis and severity. Also, in our study, the serum lipase concentration at admission was elevated in proportion to radiological severity, but it is not correctly correlated with the radiological severity on multivariate analysis. There were significant differences in each group for the APACH-II score at admission and also at 24 h. The estimation of severity through the Ranson criteria is not precise and is not an appropriate method because this method needs 48 h to complete and it has low specificity and sensitivity (77% and 75%, respectively). There was no significant correlation between the Ranson criteria and the radiological grade in our study.

The APACH-II score is the sum of the various physiologic parameters. This score has been used for evaluation of severe patients[22–24]. It has high specificity and sensitivity for acute pancreatitis. In our study, groups 2 and 3 showed high sensitivity and specificity compared to group 1. But, the APACHE II score allows monitoring both the disease progression and the response to therapy, but the system is complex, difficult to perform and less accurate for identification of local complications[25]. On our multivariate analysis, the complex APACHE II system was not correlated with the radiological grade when compared to the easily detectable CRP concentration, and the APACHE II system had a lower positive likelihood ratio and accuracy rate.

CRP is an acute stage protein that’s synthesized in the liver. This parameter is usually used because it is simple and cheap[2627]. CRP is known to be a significant factor in the differential prognosis of acute pancreatitis[528–30]. In this study, the CRP titer was only a predicative factor with good correlation to the radiological grade on multivariate analysis. Our results show statically significant differences at admission for prediction of severity. Also, changes of the CRP level during treatment reflect the prognosis of disease. When the cut-off value of CRP was 8.3 g/L, the positive predictive value was 38.4 mg/L in-group 3, and the negative predictive value was 0.26 in group 3. This single factor was the most precise and accurate for determining the radiological severity.

In conclusion, our study suggests that the CRP with the radiological severity may be used to estimate the severity of acute pancreatitis.

The diagnostic markers (pancreatic enzymes such as amylase and lipase) and the risk factors that affect the clinical outcome are not well established in acute pancreatitis. Abdominal computer tomography (CT) has recently been used for determining the presence and diagnosis of complications in acute pancreatitis patients.

Previous studies haven’t showed that clinical evaluation and biochemical marker predict severity in acute pancreatitis. The CT grade has shown good correlations with clinical course and the prediction of mortality.

C-reactive protein (CRP) and radiological severity have good correlation and may be used to estimate the severity of acute pancreatitis. CRP is easily measurable and is a simple method. CT is a good method which allows the prediction of clinical course and mortality, but it is expensive. Therefore, CRP is alternative method and clinically useful for prediction severity.

This interesting study suggests that the CRP with the radiological severity may be used to estimate the severity of acute pancreatitis. The contents of the manuscript are reasonable, and this may be a useful method for prediction of clinical course and mortality, as the author’s state.