METHODS: Hepatitis C genotype-3 patients during the period July 2006 and June 2007 were included. Complete blood counts, prothrombin time, ALT, albumin, qualitative HCV RNA were done. SdIF and ribavirin were given for 4 wk and qualitative HCV RNA was repeated. Those testing negative were allocated to group-A while the rest were allocated to group-B. Treatment was continued a total of 16 and 24 wk for group A and B respectively. HCV RNA was repeated after 24 wk of treatment. End virological and sustained virological responses were compared by χ2 test. ROC of pretreatment age, ALT and albumin were plotted for failure to achieve SVR.

RESULTS: Of 74 patients treated, RCV RNA after 16 wk of therapy became undetectable in 34 (45.9%) and was detectable in 40 (54.1%) and were allocated to groups A and B respectively. SVR was achieved in 58.8% and 27.8% in groups A and B respectively. SVR rates were significantly higher in patients who had RVR as compared to those who did not (P = 0.0; γ = 2). Both groups combined ETR and SVR were 70% and 33% respectively. ROC plots of pretreatment age, ALT and albumin for SVR showed only ALT to have a significantly large area under the curve.

CONCLUSION: SVR rates were higher in patients who had RVR with SdIF and high pre treatment ALT values correlated to probability of having RVR.

Hepatitis C virus (HCV) is a big health care problem all over the world with 130 million patients infected with this virus world over[12]. The problem in developing countries is compounded by the poor economical status of the patients who are unable to afford the expensive therapy. The most prevalent genotype in Pakistan is type-3 (68%-87%) which has a favorable response to standard interferon[3–6]. Recently some studies have suggested 16 wk therapy with pegylated interferon (PgIF) in patients who achieve rapid virological response (RVR) at 4 wk. The SVR rates in patients with RVR with pegylated interferon have been reported at 78% and that with standard interferon (SdIF) at 53%[7]. The treatment protocols that consider viral load and RVR are proven to be more cost effective than standard protocols[8]. For genotype-2 most of the studies are in favour of a 16 wk therapy in patients who achieve RVR but there is no such recommendation for genotype-3 and more data is required to make any such recommendation[9].

In a poor country like Pakistan affordability of even 16 wk of PgIF treatment is financially difficult. There is no report of 16 wk standard interferon therapy results regarding sustained virological response (SVR) from Pakistan. The current study was conducted to see the end treatment response (ETR) and SVR in patients who achieved the RVR with SdIF.

This interventional study was conducted at Civil Hospital and Anklesaria Nursing Home Karachi during the period July 2006 and June 2007. Naïve patients of chronic HCV of Genotype-3 were included. Patients with decompensated disease, depression, allergy to interferon were excluded. Complete blood counts (CBC), prothrombin time (PT), ALT, albumin, qualitative HCV RNA and genotype were done before start of therapy. Therapy was started with SdIF α 2a 3.0 MU thrice weekly (TIW) and ribavirin 800-1200 mg PO according to weight. Qualitative HCV RNA was repeated after 4 wk into therapy. Patients who tested negative at this stage were allocated to Group-A while those in which it was still detectable were allocated to Group-B. Patients in Group-A were continued with the same therapy for 12 more wk for a total of 16 wk and then the therapy was stopped. These patients were retested for HCV RNA after 24 wk of stoppage of therapy for SVR. Patients in Group-B were continued with the same therapy for a total of 24 wk and were retested for HCV RNA for ETR. Patients in which HCV RNA was still detected after 24 wk of therapy were labeled as non-responders. Those who tested negative were followed for a further 24 wk without any treatment and retested for HCV RNA for SVR (Figure 1). 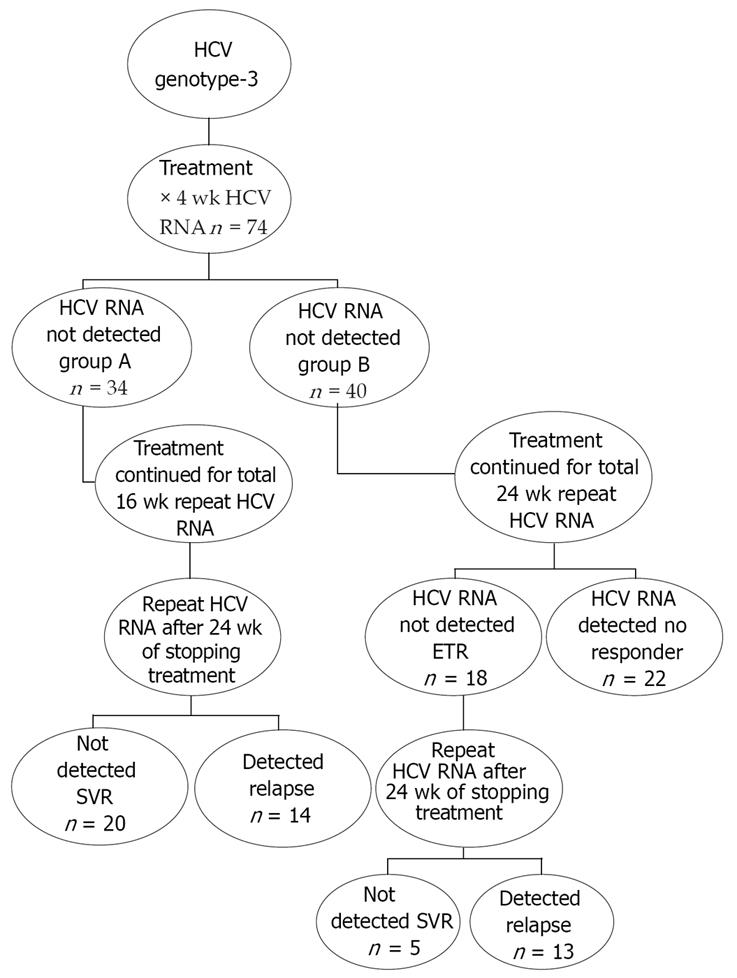 CBC was done by a Sysmex Autoanalyzer while biochemical tests were done by Hitachi Autoanlyzer using Merck biomedical reagents. HCV RNA was done by Roche reverse transcriptase method. Sample size was determined for hypothesis testing for two population proportions[10]. Keeping the level of significance at 5%, power of study at 90% and reported SVR rates of 78% and 53% the sample size was calculated to be of 74 patients[7]. Scale variables of age, ALT, hemoglobin, albumin were compared between the two groups by Students t-test. The nominal variables of gender, ETR & SVR were compared by χ2 test. Receiver operator curve (ROC) was plotted for age, ALT and albumin at the start of treatment. Failure to achieve RVR was taken as a variable state.

ROC plots for age, ALT, and albumin at the time of induction were plotted for failure to achieve RVR at the end of 4 wk (Figure 2). The area under the curve for ALT was significantly high at 0.8 with P = 0.000. This shows that among the three variables ALT had strong predictive value for RVR failure. At the cutoff of 73.5 IU/dL the sensitivity and specificity of ALT for RVR failure was 1.0 and 0.94 respectively. Thus values of ALT ≤ 73.5 U/L at the start of treatment were less likely to have RVR.

Although much research has gone into the treatment of chronic HCV, the optimal treatment is not yet established[12]. Many treatment options are in vogue with different success rates[13–15]. PgIF based protocols have better responses as compared to the SdIF but cost becomes the major hurdle in developing countries. In Pakistan the most common genotype is 3 which is highly responsive to SdIF[516]. RVR is now a new landmark in the treatment and retreatment of HCV and it not only determines the duration but also predicts the outcome of the therapy[17–19]. For genotype-2 most of the studies are in favour of a 16 wk therapy in patients who achieve RVR but there is no such recommendation for genotype-3[9].

Most of the studies with RVR were done in western countries which have a high prevalence of genotype-1. We report our results with SdIF in genotype-3 HCV; with about 46% achieving RVR and about 59% among them achieving SVR. A recent study by Yu et al[20] with PgIF reported RVR and SVR at 86% and 94% respectively. Another recent study by Yu et al reported RVR with PgIF in genotype-3 at 60%[17]. Cost effectiveness of the RVR based therapy with PgIF is established by recent reports not only in HCV infection alone but also in combined HCV/HIV infections[78]. In Pakistan the majority of genotype-3 patients are treated with SdIF due to economic reasons and Pakistan Society of Gastroenterology and GI Endoscopy also favours the use of SdIF in genotype-3[21]. Government is also providing only SdIF via a special Prime Minister’s initiative for a viral hepatitis program, thus PgIF is out of reach for the majority of the patients.

The results of our study with SdIF are not comparable to that with PgIF in genotype-3 HCV on both RVR and SVR. In our study the SVR rates in patients who achieved RVR were about 59% and over all both groups combined SVR was 33% only which are quite low as compared to the recent reports of 86% and 90%[20]. Our study did show that SVR rates were higher in patients who attained RVR showing that RVR is an important landmark in management of HCV with SdIF too.

No data is available for prediction of RVR in patients undergoing treatment for HCV, although some data is available for SVR. One such study has been reported that at the age of 20 years; no cirrhosis/bridging fibrosis; ALT quotient = 7; body mass index 20 kg/m2; viral load 40 × 106 IU/L was associated with a 97% probability of SVR[22].

In this study we tested the pretreatment levels of ALT, albumin and age as a prediction for RVR by plotting the ROC plots. Only ALT was found a significant marker as patients with high ALT were more likely to achieve RVR.

In conclusion, SVR rates were higher in patients who had RVR with SdIF and high pre treatment ALT values correlated to probability of having RVR.

Treatment of Hepatitis C virus (HCV) has varied response according to the genotype of the infecting virus. Ability to achieve Sustained Virological Response (SVR), which is the HCV polymerase chain reaction (PCR) negativity maintained six months after stopping treatment, is the real objective of the treatment. It is difficult to predict who will achieve Rapid virological response (SVR).

Introduction of SVR is the clearance of HCV RNA within one month of treatment. It is being projected as a marker for SVR in patients treated with pegylated interferon. RVR has not been studied for SVR with standard interferon.

The study documents that in HCV genotype-3 patients treated with standard interferon SVR is related to the RVR. It was also shown that patients with initial high ALT are more likely to have RVR.

This will allow for better prediction of treatment results.

Authors have shown that a short course of short acting interferon (16 wk) is efficacious in the patients who experience EVR. Perhaps, this approach would be cost-effective and useful in Pakistan.