METHODS: The enzyme-linked immunosorbent assay (ELISA) was used to measure the concentrations of calprotectin in feces obtained from 66 patients with UC and 20 controls. C-reactive protein (CRP), erythrocyte sedimentation rate (ESR), acid glycoprotein (AGP) were also measured and were compared with calprotectin in determining disease activity of UC. The disease activity of UC was also determined by the Sutherland criteria.

CONCLUSION: Calprotectin in the patient’s feces can reflect the disease activity of UC and can be used as a rational fecal marker for intestinal inflammation in clinical practice. This kind of marker is relatively precise, simple and noninvasive when compared with other commonly-used markers such as CRP, ESR and AGP.

Ulcerative colitis (UC) is a chronic, idiopathic inflammatory bowel disease characterized by remission of disease activity. The incidence and the prevalence rates of UC are increasing in China[1]. It is important to accurately evaluate intestinal mucosa inflammation in the management of these patients, particularly for the assessment of therapeutic effectiveness. Colonoscopy and biopsy are useful in the assessment of intestinal mucosa inflammation of patients with UC, but these examinations can be a heavy burden to the patient[23]. Clinical evaluations including laboratory tests such as C-reactive protein (CRP)[4–6], erythrocyte sedimentation rate (ESR)[7], acid glycoprotein (AGP)[8], and platelet count[910], have been used for the determination of disease activity of UC, but none of them are specific for gut inflammation[11]. Therefore, a new marker that will be more sensitive and specific for determination of disease activity of UC is urgently needed in clinical practice.

An alternative approach to the assessment of the presence of intestinal inflammation[12] is to analyze the whole gut lavage fluid or to quantitate the protease resistant neutrophil derived proteins such as lactoferrin[1314] in the patient’s feces, and this approach can be non-invasive for the patient. Calprotectin is one of these proteins. It is a major protein in the neutrophilic granulocytes and the macrophages[15], which accounts for 60% of the total protein in the cytosol fraction in these cells[1617]. This kind of protein can resist metabolic degradation caused by intestinal bacteria, and the protein is relatively stable in stools for up to one week at room temperature[18]. It can differentiate between patients with organic or non-organic intestinal disease, and can be useful in detecting colorectal cancer and inflammatory disorders, and can also be useful in predicting a relapse of inflammatory bowel disease[19].

Our study was aimed at the measurement of the concentration of calprotectin in the feces of the UC patient and at the comparison of it with commonly-used markers in clinical practice, such as CRP, ESR and AGP.

Sixty-six patients with UC (age, 38.97 ± 2.39 years) were enrolled in the study, including 15 patients with proctitis, 22 with left-sided colitis, and 29 with pancolitis. Of the patients, 44 were hospitalized. The patients’ disease activities were assessed according to the Sutherland criteria[20] in which a score of more than two was considered to indicate the active stage of the disease. The control group consisted of 20 subjects (age, 38.95 ± 3.59 years) with no confirmed abnormality in the upper or lower digestive tract.

The patients were instructed to defecate directly into a polystyrene container. The stool samples were stored at -70°C until the time of measurement.

Measurement of fecal calprotectin by ELISA

The stool samples were thawed, and 50-100 mg of the sample was suspended with 2500-5000 &mgrL of the fecal extraction buffer, and was homogenized; then, the suspernatant was diluted to 1:50, and the calprotectin was analyzed by the enzyme-linked immunosorbent assay (ELISA) using the Nycotest Phical ELISA kit (Nycomed, Norway). Microcapture and immunoaffinity-purified rabbit anticalprotectin conjugated with alkaline phosphatase was used for the development. The ELISA read the absorbance at 405 nm for 96-well plates. The results of the sample tests were evaluated from the standard curves. CRP, ESR and AGP were measured in the clinical laboratory, West China Hospital, based on the instructions provided by the reagent manufacturer.

Statistical analysis was performed using the statistical package SPSS 11.5. The data were expressed as means ± SD. The Mann-Whitney test was used to assess differences in the laboratory parameters between the groups, and Spearmans’ correlation was used to analyze the correlation between the parameters. All the P values were two tailed; P values < 0.05 were considered statistically significant. The receiver operating characteristics (ROC) (sensitivity and specificity) were assessed by the curve analysis as described by Henderson[21].

RESULTS
Concentrations of fecal calprotectin, CRP, ESR and AGP in patients with UC and in controls 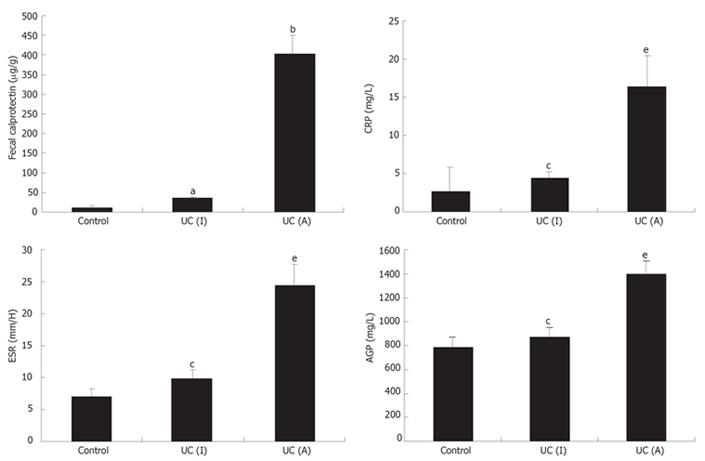 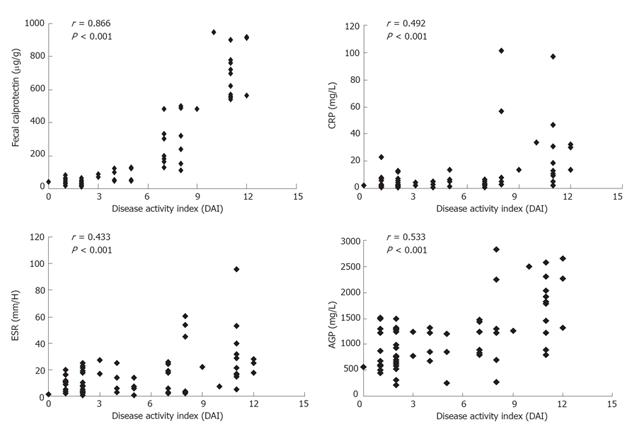 Figure 2 Concentrations of fecal calprotectin, CRP, ESR and AGP in UC and the DAI score of UC.
Specificity and sensitivity 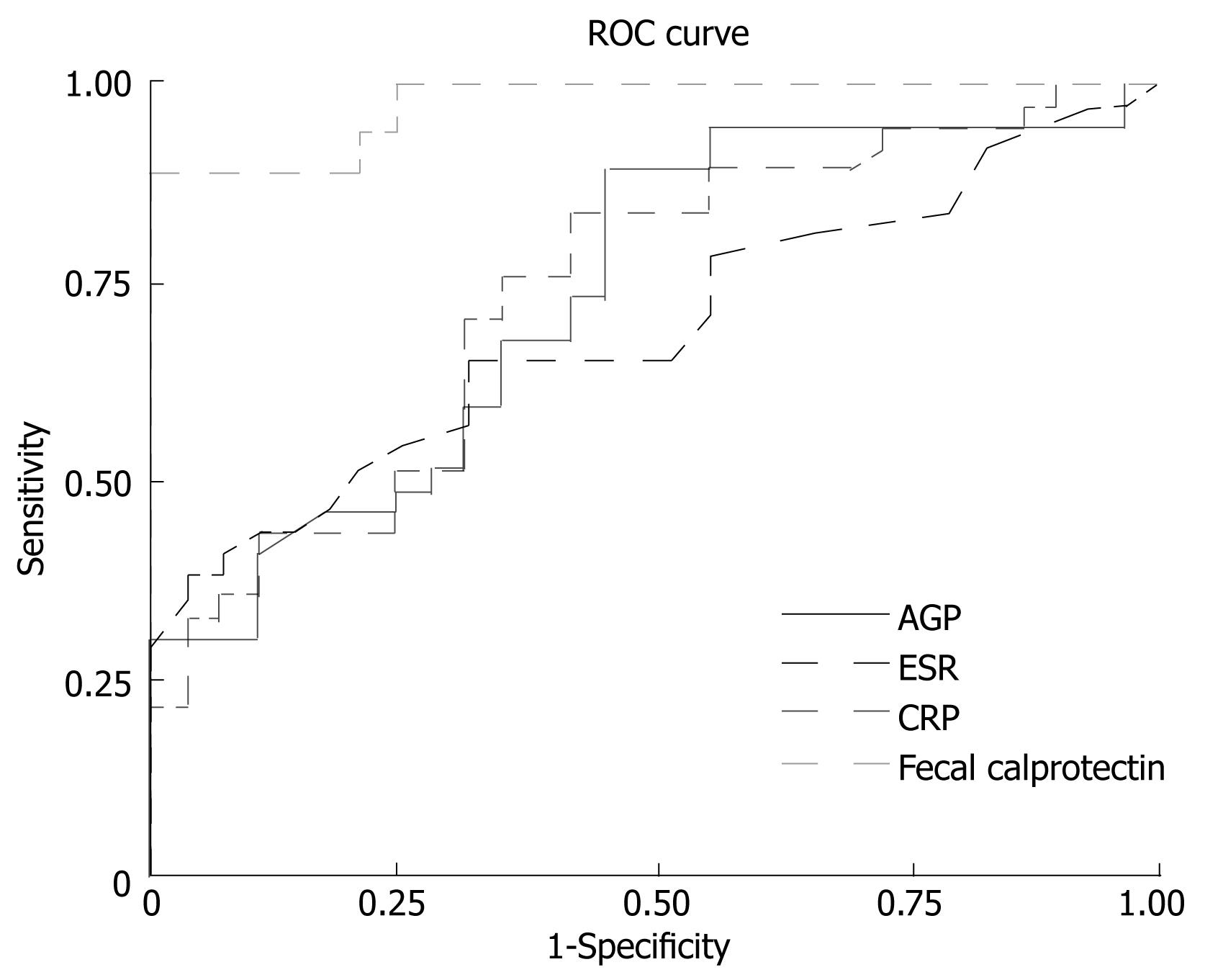 Figure 3 The ROC curve analysis on the abilities of calprotectin, CRP, ESR and AGP to make a difference between active UC and inactive UC.
DISCUSSION

Chronic relapsing and remitting inflammation of the gastrointestinal tract is the hallmark of UC. One of the most prominent histological features observed in UC is infiltration of the neutrophils into the inflamed mucosa at an early stage of inflammation. The neutrophils are major sources of inflammatory cytokines, chemokines proteases, active lipids, and reactive oxygen derivatives, as well as a full complement of factors needed to exacerbate mucosal inflammation and tissue injury[22–25] The fecal calprotectin excretion of indium-labeled autologous granulocytes has for a long time been suggested as the gold standard test in assessing bowel inflammation in inflammatory bowel disease. However, as it involves an exposure to radiation and prolonged fecal collection, which is unpopular with patients and laboratory staff, it is only used as a research tool. In patients with inflammatory bowel disease, a three day excretion of indium-labeled granulocytes correlated well with a daily excretion and a one-off fecal calprotectin level[26].

In this study, we focused on the evaluation of any relationship that might exist between the mucosal neutrophil infiltration represented by calprotectin, CRP, ESR, AGP and the UC disease activity represented by the Sutherland criteria. The DAI score of UC is the sum score of the following four parameters (each scoring between nought and three, making 12 the worst score): stool frequency, rectal bleeding, mucosa appearance, and physician’s global assessment[27]. It reflects the clinical representation of UC and is the most extensive and simplest DAI. It is adopted by the guidelines for the management of inflammatory bowel disease in the fourth Asia Pacific Digestive Week[28]. Our results showed that fecal calprotectin concentrations were significantly higher in the patients with active UC than in the patients with inactive UC and in the controls. In addition, our results showed that fecal calprotectin concentration was higher in the patients with inactive UC than in the controls. In the patients with UC, the fecal calprotectin concentration had a better correlation with DAI than the CRP, ESR or AGP concentration.

The ROC curve is adopted not only to ensure the right cut-off point, but also to compare the diagnostic values of two or more diagnostic tests. The ROC analysis on the fecal calprotectin concentrations under these circumstances, showed that a cut-off point of 50.0 &mgrg/g for calprotectin had a 91.9% sensitivity and a 79.4% specificity for making a differentiation between active UC and inactive UC. These were significantly better than those obtained with CRP, ESR and AGP.

The incidence and the prevalence rates of ulcerative colitis (UC) are increasing in China. It is important to accurately evaluate intestinal mucosa inflammation in the management of these patients, particularly for the assessment of therapeutic effectiveness. No clinical evaluations are specific for gut inflammation. Therefore, a new marker that will be more sensitive and specific for determination of disease activity of UC is urgently needed in clinical practice.

Calprotectin can resist metabolic degradation caused by intestinal bacteria, and the protein is relatively stable in stools for up to one week at room temperature. Some foreign research has shown that fecal calprotectin concentrations were significantly higher in patients with active UC than in patients with inactive UC and in the controls.

Our study improved the originality of the manuscript assessing the relationship between calprotectin level and extension of colitis. This question was not described enough in the medical literature.

This manuscript provided compelling evidence that fecal calprotectin was a better marker than C-reactive protein (CRP), erythrocyte sedimentation rate (ESR) or acid glycoprotein (AGP) and improved the originality of the manuscript assessing the relationship between calprotectin level and extension of colitis. It deserves to be published.