METHODS: We used chromatin immunoprecipitation (ChIP) assay to assess the status of histone acetylation and methylation in promoter regions of the p16 and mutL homolog 1 (MLH1) genes in 2 gastric cancer cell lines, SGC-7901 and MGC-803. We used methylation-specific PCR (MSP) to evaluate the effect of 5-Aza-2’-deoxycytidine (5-Aza-dC), trichostatin A (TSA) or their combination treatment on DNA methylation status. We used RT-PCR to determine whether alterations of histone modification status after 5-Aza-dC and TSA treatment are reflected in gene expression.

Multiple recent reviews have shown that virtually all human cancer types have epigenetic abnormalities that collaborate with genetic changes to drive cancer development and progression[1-7]. Hypermethylation of DNA in promoter CpG islands of tumor suppressor genes (TSGs) is known to inhibit transcriptional initiation and cause permanent silencing of the genes, which play a crucial role in carcinogenesis[1,2]. It was reported that hypermethylation of DNA in promoter CpG islands and diminished expression are present in a number of tumor-related genes in gastric cancer, which is one of the major current causes for cancer death in Asian countries[8]. For example, silencing of the cyclin-dependent kinase inhibitor p16 gene induced by hypermethylation can lead to disruption of cell cycle regulation and provide a growth advantage to affected cells[9]. A mismatch repair gene, MLH1, is often silenced with aberrant CpG island hypermethylation in gastric cancers[10,11]. Except for DNA methylation, recent studies have demonstrated the importance of histone modification as another epigenetic mechanism in the organization of chromosomal domains and gene regulation[12-18]. Acetylation of H3-K9 and methylation of H3-K4 are associated with open chromatin configurations such as that found at transcriptionally active promoters. In contrast, methylation of H3-K9 is a marker of condensed, inactive chromatin of the sort associated with the inactive X-chromosome and pericentromeric heterochromatin[16,17,19,20].

Treatment with 5-Aza-dC and TSA

The genomic DNA was modified by bisulfite treatment, as described previously[23]. DNA was purified using a Wizard DNA clean-up system (Promega), precipitated with ethanol, and resuspended in 30 μL of Tris-EDTA buffer. Two microliters of the aliquot was used as a template. The primers used for MSP and additional PCR conditions are described elsewhere[22]. PCR products were separated by electrophoresis on 2% agarose gels and quantitated with the FluorChem 2.0 system. The experiment was repeated three times.

Total cellular RNA was extracted from each of the two cell lines with TriZOL (Invitrogen) according to the manufacturer’s protocol. RNA was resuspended in nuclease-free water and quantitated with a spectrophotometer. Reverse transcription (RT) reactions were done on 2 μg of total RNA following the manufacturer’s protocol (Promega). cDNA was amplified by PCR using primers as described previously. Reaction conditions for each PCR are described elsewhere[24]. PCR products were resolved on 2% agarose gels and quantitated using the Fluor Chem 2.0 system. The level was determined by quantifying the intensities of the PCR product versus glyceraldehyde-3-phosphate dehydrogenase (GAPDH). The experiment was repeated three times.

ChIP assays were performed as described previously with some modifications[24]. Briefly, proteins were cross-linked to DNA by adding formaldehyde directly into the culture medium to a final concentration of 4 g/L for 20 min at 37°C. After washing, the cell pellets were resuspended in 500 μL lysis buffer and sonicated thirty-five times, 2 s each. The average fragment size after sonication was 500 bp. The lysate (500 μL) was then divided into three fractions. The first and second fractions (200 μL each) were diluted in 1800 μL of lysis buffer, and the third fraction (100 μL) was used as an input control. The first lysate was incubated overnight at 4°C with 5 μL anti-Lys-9 acetylated histone H3 antibody, 5 μL anti-Lys-9 dimethylated histone H3 antibody, or 5 μL anti-Lys-4 dimethylated histone H3 antibody (all antibodies from Upstate Biotechnology) overnight at 4°C. The second lysate was incubated with Tris-EDTA buffer (5 μL) as a negative control. Immune complexes were collected with 20 μL protein A-sepharose beads for 1 h at 4°C with agitation. The cross-links were reversed by heating the sample at 65°C for 5 h. After elution, the samples were digested with proteinase K. DNA was recovered by phenol extraction, precipitated with ethanol, and resuspended in Tris-EDTA buffer.

Amplification was carried out with 2 μL of an immunoprecipitated DNA, a control without antibody or a 1:10 dilution of input DNA that was not immunoprecipitated. The primers used for ChIP and PCR conditions are described elsewhere[22]. We selected P16-3, P16-6, MLH1-2 and MLH1-3. PCR products were electrophoresed on 2% agarose gels and quantitated with the FluorChem 2.0 system. The level of histone acetylation and methylation in each immunoprecipitation was measured by quantifying the intensities of the PCR product in immunoprecipitated DNA versus input DNA diluted at 1:10 (total chromatin). The experiment was repeated three times.

RESULTS
MSP analysis for each promoter region after treatment with 5-Aza-dC, TSA or their combination 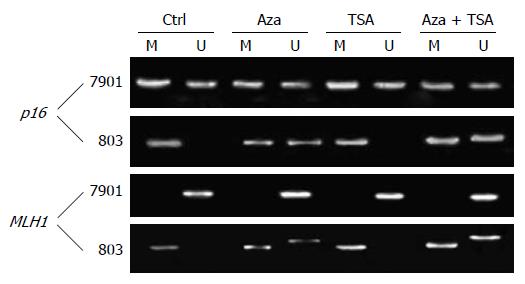 RT-PCR analysis for expression and reactivation of p16 and MLH1 after treatment with 5-Aza-dC, TSA or their combination 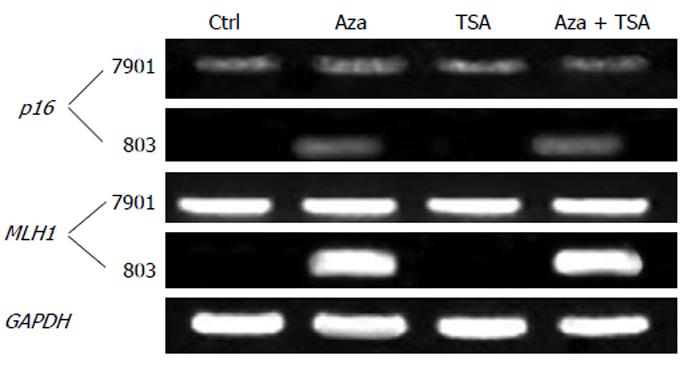 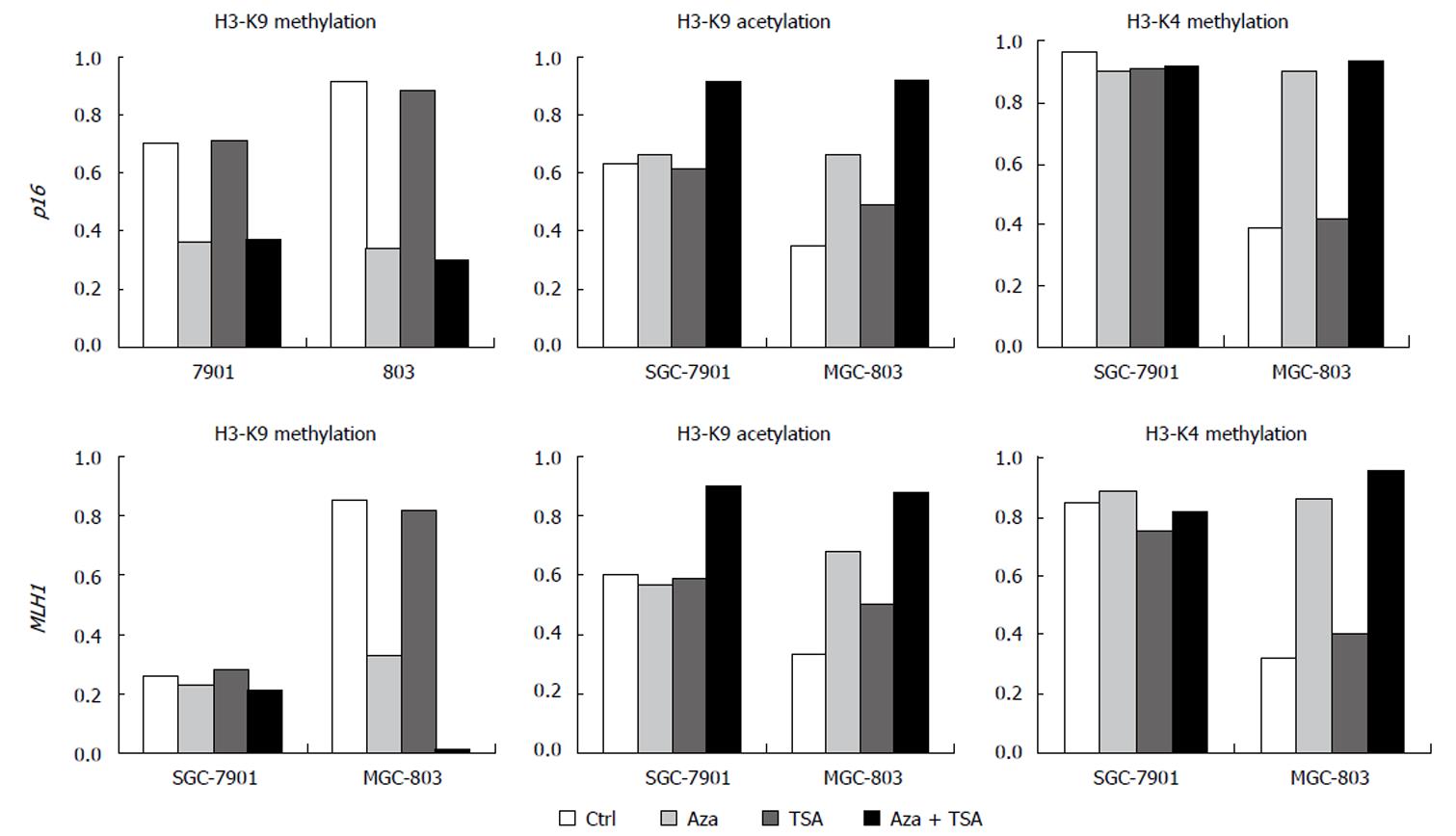 Figure 4 Summary of quantitative analysis for ChIP assays. Ratios of precipitated DNA over input DNA were used to calculate the relatively precipitated fold enrichment on the y axis.

ChIP assay for histone H3-K9 acetylation across the promoter of TSG and change after treatment with 5-Aza-dC, TSA or their combination

ChIP assay for histone H3-K4 methylation across the promoter of TSG and change after treatment with 5-Aza-dC, TSA or their combination

Figure 5 Status of histone H3-K9 acetylation (A) and histone H3-K4 methylation (B) across TSGs and change in gastric cancer cells after treatment with 5-Aza-dC, TSA or their combination. Ctrl: No treatment; IP: Immunoprecipitated DNA; NAC: No-antibody control; IN: Input DNA from whole-cell lysate.
DISCUSSION

Silencing of tumor suppressor genes is related to epigenetic regulation of both DNA methylation and histone modification[25]. In the present study, hypermethylation in promoter CpG islands was significantly associated with p16 and MLH1 silencing. Furthermore, aberrantly silenced and DNA hypermethylated genes in gastric cancer cells were characterized by histone H3-K9 hypermethylation, H3-K4 hypomethylation and H3-K9 hypoacetylation.

Histone modification plays a prominent role in the epigenetic regulation of gene transcription. There is evidence that dysregulation of epigenetic process causes transcriptional repression of a subset of genes, contributing to the pathogenesis of many cancers. The relationship between aberrant epigenetic changes and tumorigenesis is still to be identified.

Reactivation of the p16 and MLH1 gene by DNA methyltransferase inhibitor alone or in combination with histone deacetylase inhibitor suggests that the two agents can be used in treatment of gastric cancer.

Histone is the major component of chromatin functioning as a DNA packaging unit and as a transcriptional regulator. The amino-terminal tails of histones protrude from the nucleosome and are subjected to chemical modifications including phosphorylation, acetylation and methylation. These modifications of histones affect the access of regulatory factors and complexes to chromatin and influence gene expression. These different combinations of histone modifications at different residues may act synergistically or antagonistically on gene expression.

This is an important and interesting study, and the manuscript is well-written. The major finding in this paper is that treatment with 5-Aza-dC, a DNA methylation inhibitor and TSA, a histone deacetylase inhibitor, affects the expression of tumor suppressor genes, including p16 and MLH1, by reversing the hypermethylation and inhibiting histone deacetylation in human gastric cancer cells.