A high incidence of IgA nephropathy has been reported in patients with liver cirrhosis, though, clinically evident nephrotic syndrome is very uncommon. Impaired hepatic clearance of circulating IgA immune complexes and subsequent deposition in renal glomeruli has been considered principally in the pathogenesis of liver cirrhosis associated IgA nephropathy. Here we report on a patient with cryptogenic liver cirrhosis and splenic vein thrombosis, who presented with nephrotic syndrome. Renal biopsy showed findings consistent with IgA nephropathy. Lower endoscopy showed features of portal hypertensive colopathy. Following initiation of propranolol and anticoagulant treatment to reduce portal pressure, a gradual decrease of proteinuria and hematuria to normal range was noted. The potential pathogenetic role of portal hypertension in the development of IgA nephropathy in cirrhotic patients is discussed.

IgA nephropathy (IgAN) is a well known concomitant of liver cirrhosis (LC) with largely unknown pathogenesis[1,2]. Most of the literature has focused on the causative role of impaired clearance of circulating IgA immune complexes (IgAIC) by the diseased liver with subsequent intraglomerular deposition[1,3-5]. Other reports suggested that some etiological factors of chronic liver disease may be associated per se with development of IgAN[6-11]. We report the case of a patient with portal hypertension (PH) due to cryptogenic LC and splenic vein thrombosis (SVT) presented as nephrotic syndrome (NS), caused by IgAN. Proteinuria resolved after the introduction of propranolol and oral anticoagulation. The association of PH with IgAN is reviewed and potential pathogenetic mechanisms through which PH can cause IgAN in cirrhotic patients are proposed.

A 34-year-old man was evaluated for nephrotic range proteinuria and LC. Seven days before, he was admitted to another hospital with a 6-mo history of ankle swelling and periorbital oedema, and a 3-wk history of increased abdominal distention. Abdominal ultrasound showed a nodular liver, moderate ascites, and splenomegaly; the kidneys had normal dimensions and structure. Diagnostic aspiration of peritoneal fluid showed no evidence of infection; the serum ascites albumin gradient was consistent with PH (1.2). A large volume paracentesis was performed and daily treatment with furosemide 40 mg and spironolactone 100 mg was initiated.

A renal biopsy demonstrated a diffuse endocapillary glomerulonephritis with a small proportion of crescends. The immunofluorescent study revealed IgA deposits of high intensity, localized within the mesangium of all glomeruli, as well as lesser amounts of IgM and C3. The electron-microscopic study showed electron-dense deposits under the basement membrane of capillaries that extended to the paramesangial region. A few intramembranous deposits were also seen (Figure 1). 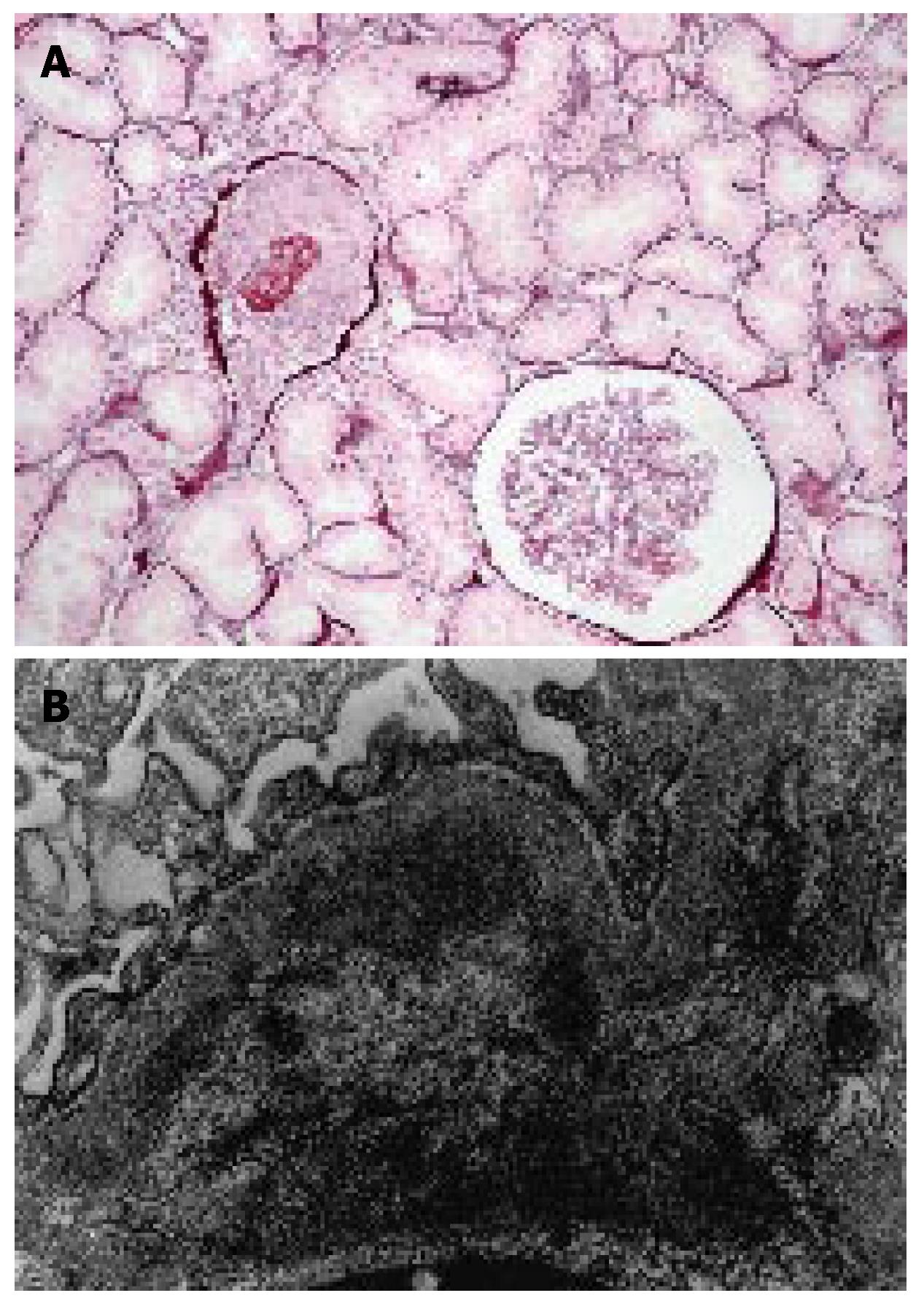 Propranolol, increasing to 60 mg daily to achieve a reduction of heart rate by 25%, the vitamin K antagonist acenocoumarol, targeting an INR in the range of 2-3, and iron sulfate were added to diuretic treatment. Renal protein excretion decreased to normal range within 20 d together with a reduction of IgA levels (3.4 g/L) and disappearance of hematuria; ascites and oedema gradually resolved. One month later, repeated tomography showed patent splenic vein and a decrease in collateral circulation and size of spleen.

IgAN associated with liver disease is the commonest form of secondary IgAN[12]. Glomerular deposits of IgA and fewer amounts of other immunoglobulins and C3 have been noted in 35% to 90% of cirrhotic patients[1,2]. The majority of IgA synthesis in human is mucosal, predominantly polymeric (pIgA) with two isotypes, IgA1 and IgA2, in about equal proportions. Normally, little mucosal pIgA reaches the circulation[12]. In patients with chronic liver disease, increased circulating IgA against gut flora and IgAIC have been reported[5,13]. Serum complement factor levels may be low due to activation of complement components by immune complexes, hepatic hyposynthesis, or both[14]. PIgA2 is mainly eliminated through the hepatic asialoglycoprotein receptor (ASGR) whereas only a small percentage of pIgA1 is cleared through this pathway[15], which explains the higher proportion of circulating IgA2 in chronic liver disease[16]. The majority of pIgA is then released back to the circulation in degraded forms[17]. Kupffer cells participate in the removal of IgA expressing specific Fc receptors[18]. PIgA1 is the predominant form in mesangial deposits[19], yet no antigens have been identified within the mesangial deposits.

LC-related IgAN is usually clinically silent[1]. Nakamoto et al[20] reported NS in 1.6% of a series of 752 cirrhotic patients. Microscopic but rarely gross hematuria may occur, but it is less common than in patients with primary IgAN[1,20].

The pathogenesis of LC-related IgAN remains uncertain. Impaired hepatic clearance of IgAIC due to reduced phagocytic[1,3-5] or ASGR[6] activity, which subsequently are deposited in the renal glomeruli, have been considered principally in the literature. However, there is no correlation between the degree of liver damage and the IgAIC levels[16]. In addition, a direct association of various causes of chronic liver disease, such as hepatitis viruses B[6] and C[7] infections, heavy alcohol consumption[8], autoimmune hepatitis[9], primary hemochromatosis[10], and alpha1-antitrypsin deficiency[11] with immunological renal injury has been suggested.

In the present case, IgAN was secondary to LC of unknown etiology complicated by PH and portosystemic shunting, as shown by the imaging results, and the presence of PHC[21] and esophageal varices. Proteinuria and hematuria resolved after introduction of propranolol to improve PHC[21] by decreasing portal pressure and tributary flow[22]. No significant renal effects of propranolol have been reported in cirrhotic patients to justify decrease of proteinuria[23]. SVT has been associated with left-sided PH in non-cirrhotic subjects[24]. Therefore, acenocumarol may have exerted an additive portal hypotensive effect in our patient by restoring SVT, possibly related to PTHR A20210 mutation[25] or NS per se[26]. Renal vein thrombosis[26] or spontaneous splenorenal shunt[27], which might have been involved in the development and progress of IgAN in our patient, were not confirmed by computed tomography and venography.

Consistent with our observations, three previous case reports highlighted the pivotal role of PH in the development of LC-related IgAN[28-30]. Nakamura et al[28] reported a progressive fall in proteinuria together with clinical remission of NS after initiation of propranolol in a patient with cryptogenic LC. In another case of non-cirrhotic PH and IgAN induced NS, portacaval anastomosis decreased portal pressure causing proteinuria and hematuria to disappear[29]. Finally, Babbs et al[30] described a case of IgAN in a non-cirrhotic patient with a large splenic artery aneurysm causing PH and extensive collateral circulation. Splenectomy and aneurysm resection induced remission of the NS and hematuria.

The portosystemic shunting that results from PH may cause IgA to deviate from hepatic uptake and depolymerization[1]. Therefore, reduction of PH is expected to increase hepatic processing of IgAIC. PH also decreases small intestinal motility promoting bacterial overgrowth[31,32], while in the same time increases intestinal permeability[33]. In this regard, increased circulating IgA and IgAIC may represent an exaggerated response of immune system to excess gut antigen exposure[34,35], resulting from diminished mucosal integrity and spillage of IgA into the circulation. Another mechanism could involve the endotoxemia that frequently accompanies LC with PH[36], suggested to be generated by gut flora through bacterial translocation[37,38] favored by dysfunction of intestinal barrier[33,37]. Previous literature showed that endotoxemia may decrease hepatic ASGR binding[39]. Therefore, portal hypotensive treatment may decrease bacterial translocation and endotoxin levels[40], which could restore ASGR function.

In conclusion, PH seems to play a significant role in the pathogenesis of IgAN associated with LC. In this point of view, a decrease in PH is likely to reduce renal protein excretion in patients with significant proteinuria. Further studies are needed to assess if the severity of PH is related with the magnitude of renal IgA deposition.