AIM: To observe whether pancreatic and duodenal homeobox factor-1 enhances the differentiation of pancreatic ductal epithelial cells into insulin-producing cells in vitro.

METHODS: Rat pancreatic tissue was submitted to digestion by collagenase, ductal epithelial cells were separated by density gradient centrifugation and then cultured in RPMI1640 medium with 10% fetal bovine serum. After 3-5 passages, the cells were incubated in a six-well plate for 24 h before transfection of recombination plasmid XlHbox8VP16. Lightcycler quantitative real-time RT-PCR was used to detect the expression of PDX-1 and insulin mRNA in pancreatic epithelial cells. The expression of PDX-1 and insulin protein was analyzed by Western blotting. Insulin secretion was detected by radioimmunoassay. Insulin-producing cells were detected by dithizone-staining.

Diabetes mellitus is a common endocrine and metabolic disease in the world. At present, insulin injection therapy is used in the treatment of type 1 and some type 2 diabetes. However, the results are not satisfactory. Transplantation of islets is one of the promising therapies for type 1 diabetes and can effectively prevent diabetic nephropathy, retinopathy and other complications[1]. Since it is limited by the shortage of islets, expanding the sources of islet cells (especially beta cells) has become a hot field of research in pancreas transplantation.

MATERIALS AND METHODS
Isolation of cells and culture conditions

Rat (adult male S-D rats, weighing 250-300 g) pancreatic tissue was digested in 1 g/L type V collagenase (Sigma) and incubated at 37°C for 40 min with intermittent shaking and then terminated by Hank’s solution, followed by centrifugation at 1000 r/min for 5 min. After purification on a Ficoll gradient, 50%-95% islets were found on the top interface (1.062/1.096 densities) with varying amounts of duct and degranulated acinar tissues, and 1%-15% islets were found on the middle interface (1.096/1.11 densities). Duct, degranulated acini and pellet were composed of well-granulated acinar tissue with less than 1% islets. In the top and middle layers, there were sheets of ductal epithelium from larger ducts whereas the clumps of exocrine cells found in all layers consisted of small intercalated ducts continuing into the acini. The epithelial cells were washed 3 times with Hank’s solution containing 5% fetal bovine serum (FBS, Gibco), then put into RMPI 1640 culture medium (Hyclone) containing 10% FBS, 100 U/mL penicillin, and 100 μg/mL streptomycin. Cell suspensions were put into non-treated T-75 flasks and incubated at 37°C in an atmosphere containing 5% CO2. After 48 h, the nonadherent tissue (both viable and dead) was removed. The medium was changed. The adherent or residual cells were expanded for up to 1 wk with media changed every 2-3 d. The adherent or residual cells were continuously cultured in an atmosphere containing 5% CO2 and 95% humidity. After 3-5 passages, the ductal epithelial cells were used in experiments.

Plasmid pCS2-TTR-XlHbox8VP16 was kindly provided by Professor J M.W.Slack (Centre for Regenerative Medicine, Department of Biology and Biochemistry, University of Bath, Bath)[13]. Plasmids were transfected into pancreatic ductal epithelial cells with Lipofectamine 2000 (Invitrogen) transfection reagent according to the manufacturer's instructions. The medium was replaced with a fresh medium after 24 h of transfection. The cells were cultured for a further 7 d, and analyzed by reverse transcriptase polymerase chain reaction (RT-PCR) or Western blotting at variable time points.

In vitro induction of differentiation

Fifty mg pancreatic tissues and 1 mL TRIzol were mixed with 0.3 mL chloroform added, and then centrifuged. Isopropanol (0.5 mL) was added to supernatant and centrifuged with supernatant discarded. Deposit was washed with 70% ethanol, and dissolved in DEPC-treated water to obtain total mRNA. In RT-PCR, 4 μL of mRNA and 0.5 μL of Oligo (dt) were added to 6.5 μL of distilled water. After annealing at 70°C for 5 min and immediate cooling on ice, 4.0 μmol/L of 5 × first strand buffer, 2.0 μL of 10 mmol/L dNTP, 0.5 μL of RNasin and 0.5 μL RTase were added to get a total reaction volume of 20 μL. The reaction was allowed to proceed at 37°C for 60 min, followed by at 95°C for 5 min to inactivate the enzyme. RT-PCR assay was performed three times for each cDNA sample. The total PCR volume consisted of 1 μL of cDNA, 1 μL of SYBRGreen PCR I, 5 μL 10 × buffer, 1.6 μL of primers (rat PDX-1: sense 5′-CTTGGGTATGGATCTGTGG-3′ and antisense 5′-CGGACTCATCGTACTCCTGCTT-3′; Xenopus PDX-1 homologue XlHbox8: sense 5′-TGCCAACTTCATCCCAGCCC-3′ and antisense 5′-GGCAGATGAAGAGGGCTC-3′; insulin: sense 5′-GCTACAATCATAGACCATC-3′ and antisense 5′-GGCGGGGAGTGGTGGACTC-3′; beta-actin: sense 5′-CTTGGGTATGGAATCCTGTGG-3′ and antisense 5′-CGGACTCATCGTACTCCTGCTT-3′), 7 μL of MgCl2, 0.5 μL of Taq DNA polymerase, 1 μL of dNTP and 33 μL of distilled water. After denaturation of the enzyme at 94°C for 2 min, 45 cycles of PCR assay were carried out, with denaturation at 94°C for 30 s, annealing at 57°C for 30 s and extension at 72°C for 30 s. Fluorometric PCR was performed with the FTC-2000 system. The expression of each transporter protein gene determined was relative to the β-actin RNA gene.

Total protein was obtained as previously described[14] at various time points (d 0, 1, 3, 5, 7, 14, 21, 28 after transfection). Proteins in samples were separated by polyacrylamide gel electrophoresis, transferred to nitrocellulose membrane and blocked overnight in a blocking solution (5% dry milk in PBS). The membrane was incubated at 37°C for 1 h with goat anti PDX-1 antibody (1:500, Santa Cruz) and goat anti insulin antibody (1:500, Santa Cruz), washed with PBS and incubated at 37°C for 1 h with horseradish peroxidase-labeled secondary antibody (1:2500). Finally, proteins were visualized on a film with the ECL method.

A dithizone (DTZ; Sigma) stock solution was prepared with 50 mg of DTZ in 5 mL of dimethylsulfoxide (DMSO) and stored at -15°C[15]. In vitro DTZ staining was performed by adding 10 μL of the stock solution to 1 mL of culture medium. The staining solution was filtered through a 0.2 μm filter and used as the DTZ working solution which was added to culture dishes and incubated at 37°C for 15 min. Clusters were examined under a phase contrast microscope.

Differentiation of cells transfected with or without TTR-XlHbox8VP16 was induced with either normal dose glucose (5.5 mmol/L) or high dose glucose (16.7 mmol/L). Insulin concentration was measured using an insulin RIA kit (Linco).

Figure 1 Transfection of recombination plasmids into cultured (A) and non-cultured (B) pancreatic ductal epithelial cells.
Expression of PDX-1 and insulin in transfected cells 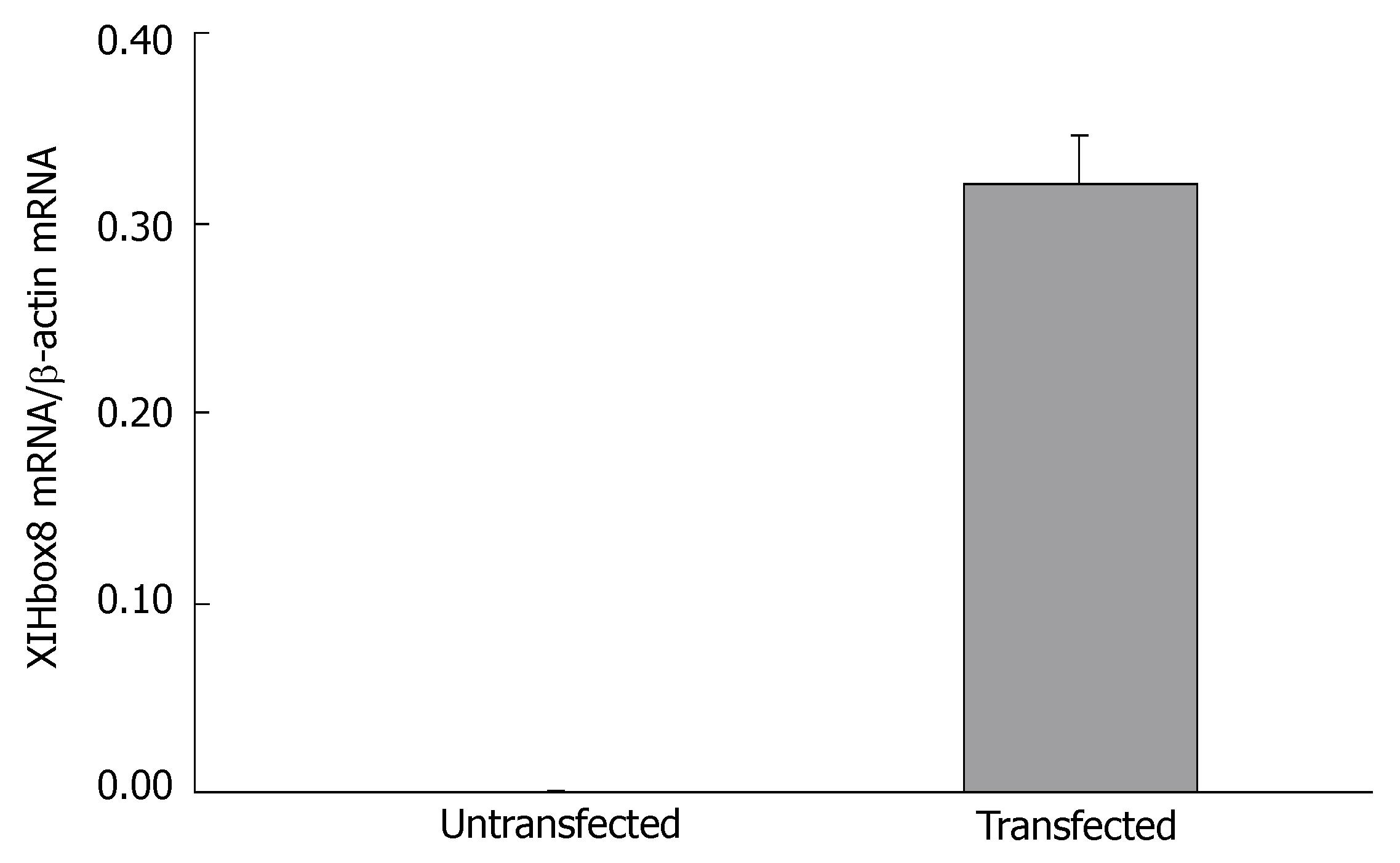 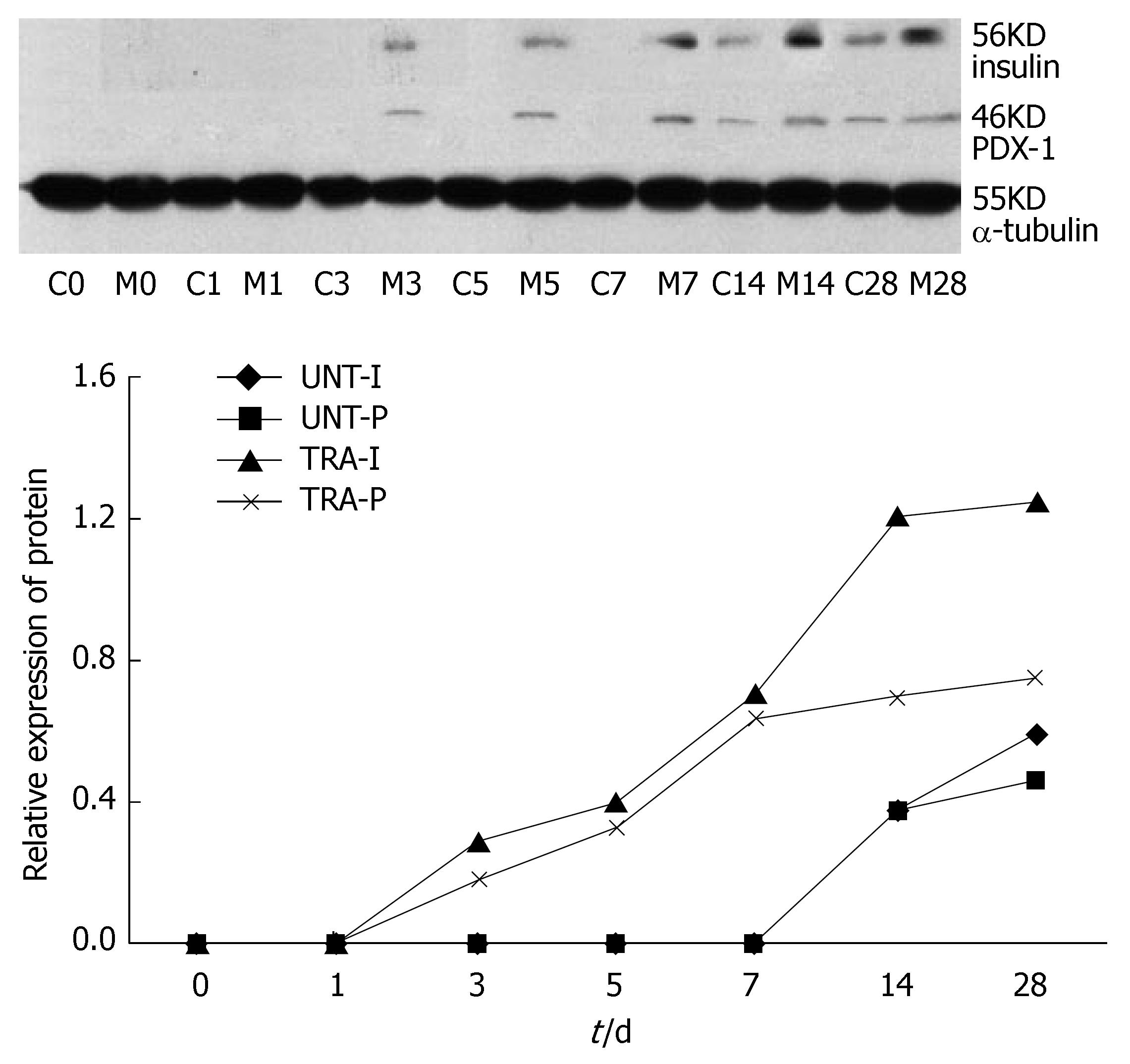 Pancreatic ductal epithelial cells were transfected with XlHbox8 expression plasmid, and stable transfectants were selected according to G418 resistance. Further differentiation of pancreatic ductal epithelial cells was induced in serum-free medium supplemented with ITS, keratinocyte growth factor (KGF, Sigma) and basic fibroblast growth factor (bFGF, Sigma). During induction, most insulin-producing cells could be seen under microscope. Dithizone staining showed more insulin-producing cells in the transfected group than in the untransfected group (Figure 5). 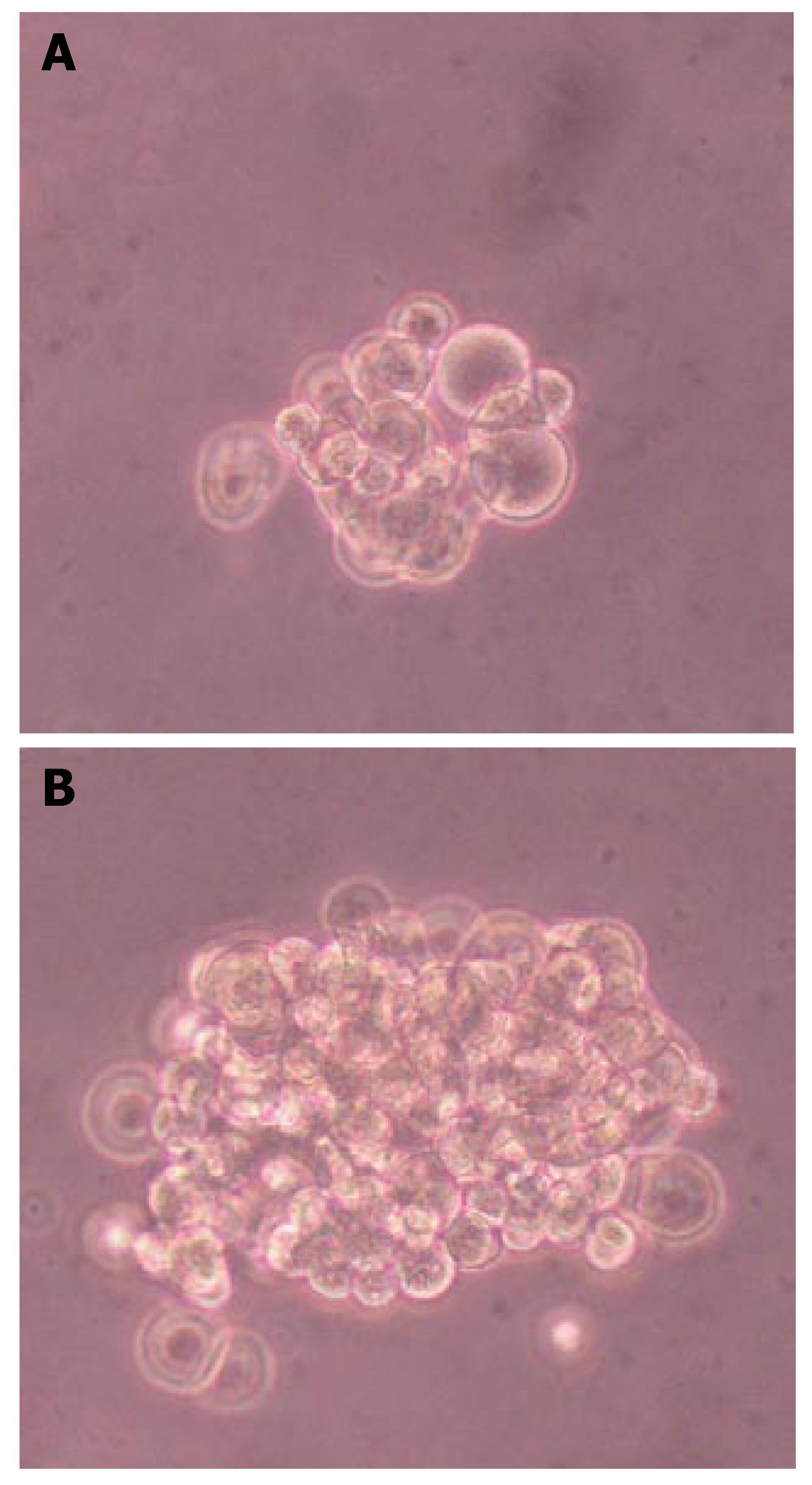 The most important and characteristic property of insulin-producing cells is their ability to secrete insulin in response to an elevated external glucose concentration. We examined the insulin concentration in the medium of differentiated cells after challenged with 5.6 and 16.7 mmol/L glucose, using a RIA kit (Figure 6). The results showed that insulin secretion was significantly increased in the transfected group compared with the untransfected group. 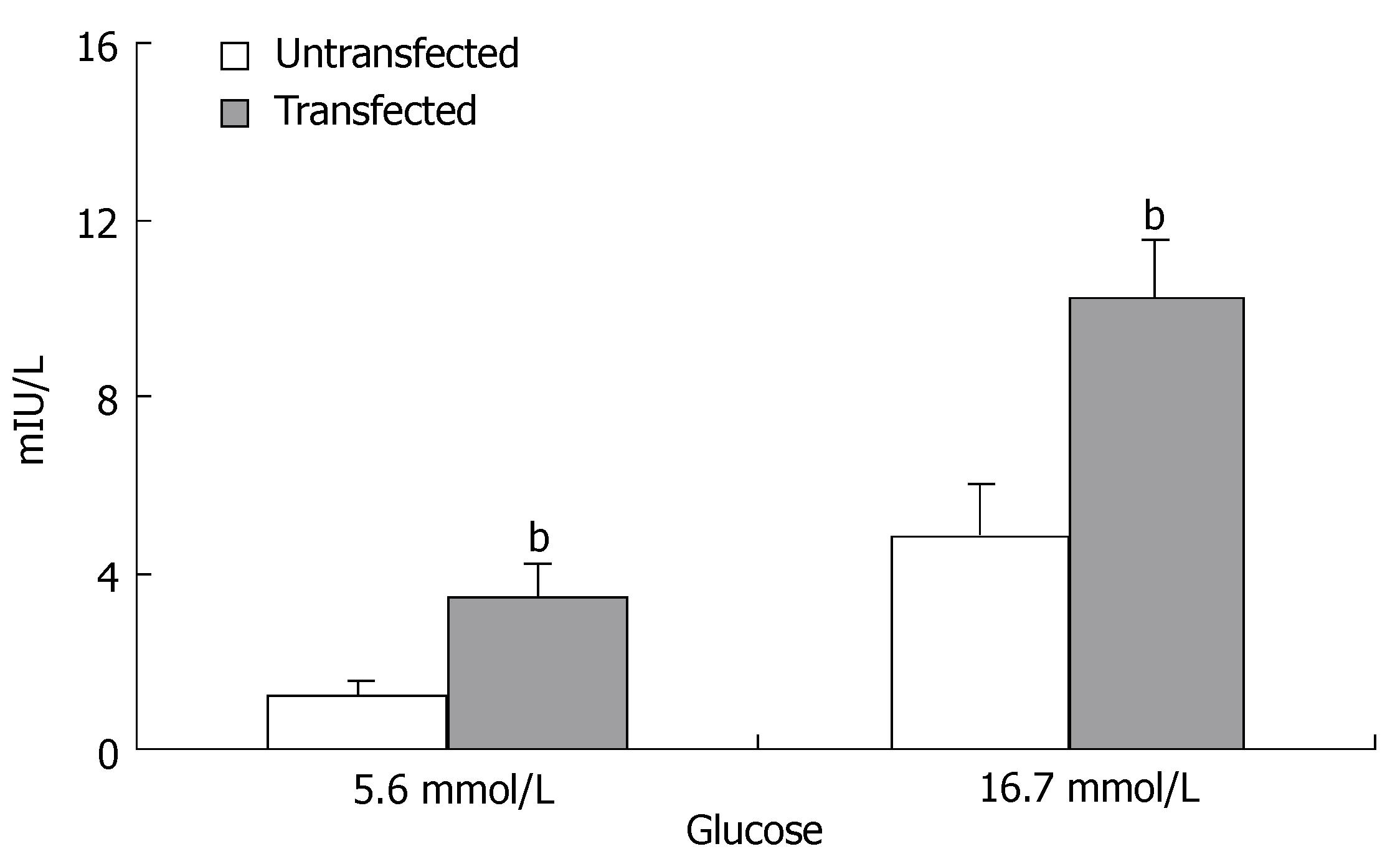 Pancreas duodenum homeobox-1 (PDX-1) is also known as islet/duodenal homeobox-1(IDX-1), insulin promoter factor-1 (IPF-1), insulin upstream factor-1 (IUF-1), somatostatin transactivating factor-1 (STF-1) and glucose-sensitive factor (GSF)[7]. PDX-1 is a transcription factor encoded by Hox-like homeodomain gene and also one of the specific signals of pancreatic stem cells. Human PDX-1 gene consists of two exons and spans a region of about 6 kb in humans and 282 amino acids[16]. In mice lacking PDX-1, pancreas development is blocked at its very early stage, and there are no or diminished endocrine cells in the rostral duodenum and stomach[17,18], suggesting that PDX-1 plays a very important role in the development and maintenance of normal pancreatic beta cell function, which also has a potential value in gene therapy for diabetes. Amplifying and inducing differentiation of non-islet cells into insulin-producing cells by PDX-1 has become a hot field of study. Miyazaki et al[19] reported that islet-like cellular clusters are significantly increased and insulin-producing cells can release more insulin by transfecting exogenous PDX-1 into embryonic stem cells. Further investigation found that PDX-1 can enhance the expression of insulin 2, somatostatin and HNF6 genes in the differentiated cells[19]. XlHbox8 is the homologous of PDX-1. Horb et al[20] transfected Xlhbox8-VP16 into liver cells and found that some liver cells could be trans-differentiated into pancreatic cells.

In conclusion, PDX-1 (XIHbox8) can significantly promote in vitro differentiation of pancreatic ductal epithelial cells into insulin-producing cells. This new method can be used in the treatment of diabetes.

The authors are grateful to the technical assistance from Yuan Tian and Jin-Hui Zhang at Research Laboratory of General Surgery, Union Hospital, Wuhan.

Diabetes mellitus is a common endocrine and metabolic disease in the world. Although transplantation of islets is one of the promising therapies for type 1 diabetes, its application is limited due to the shortage of islets.

PDX-1 (XIHbox8) can significantly promote in vitro differentiation of pancreatic ductal epithelial cells into insulin-producing cells. This new method may be used in the treatment of diabetes.

This manuscript provides direct evidence for the enhanced differentiation of pancreatic ductal cells into insulin-producing cells. The study is well designed and the results are convincing.