Pancreatic pseudocysts are a common complication of acute pancreatitis, defined as a collection of pancreatic juice enclosed by a wall of nonepithelialized granulation tissue or fibrotic capsule[1,2]. Most pseudocysts are located around the pancreatic gland, but they have also been described at a great distance from the pancreas; and the mediastinum to the scrotum, when the fluid dissects through tissue planes[3,4].

A very rare location for a pseudocyst during acute pancreatitis is in the liver with only about 30 cases previously described[5]. The lack of experience with pseudocysts located in the liver makes it difficult to establish a clear diagnosis and choose the appropriate management.

We report here a case of a patient who developed several intrahepatic lesions after an episode of acute pancreatitis. Despite a complete imaging study, the definitive diagnosis was still unclear and the patient was therefore operated on. Diagnosis and pathophysiological mechanisms were discussed herein. 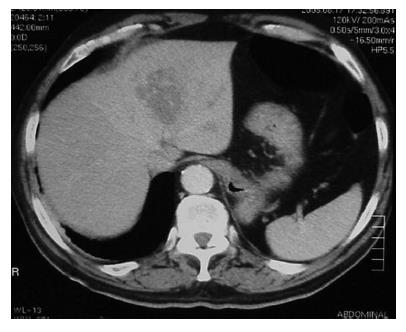 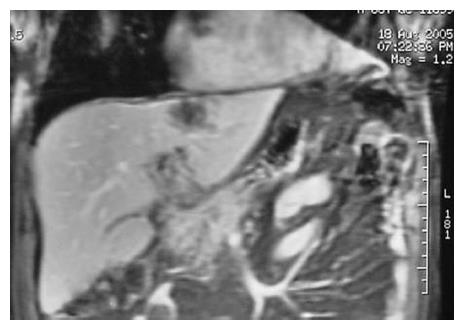 Figure 2 Magnetic resonance of the liver and bile duct showing a lesion in segments II and III and a normal common bile duct.

Since the patient had mild acute biliary pancreatitis and cholecystectomy was indicated, we decided to proceed with the operation, despite the lack of a definitive diagnosis based on the liver lesions.

Upon operation, three soft cystic tumors were located in the left lobe of the liver with a very dense and necrotic content on exploration with intraoperative ultrasonography. There were no other lesions in the right lobe or anywhere else in the abdominal cavity. Cholecystectomy with intraoperative cholangiography was performed with the liver lesions excised by a left lobectomy (Figures 3 and 4). The pseudocysts were full of debris with a very small amount of juice. Microbiologic cultures of the content in the cysts were negative. Pathological examination confirmed the pseudocystic nature of the three subcapsular lesions by proving nonepithelialized tissue of the wall (Figure 5). There were no postoperative complications and the patient was discharged 6 d after surgery. Eight months later, the patient was completely recovered and disease free. 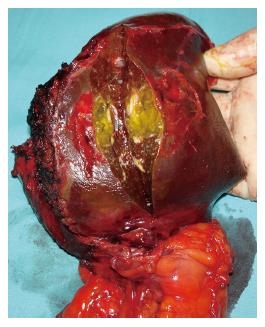 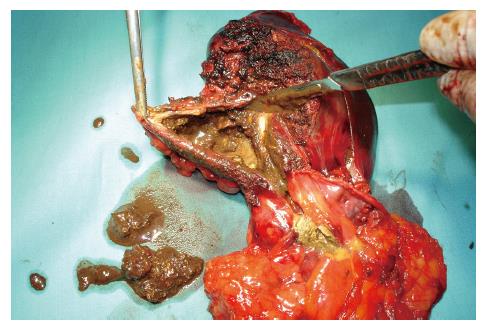 Figure 4 Cystic lesion in segment II showing the continuity with the lesser omentum and necrotic material from the pseudocyst. 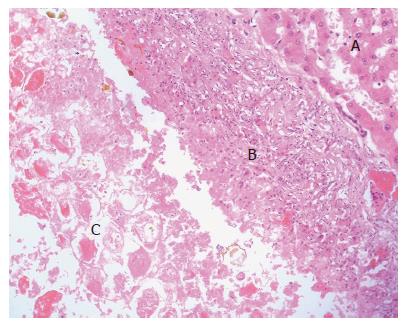 The interest in this case presented here relies on the very rare location of the pseudocysts, the atypical evolution for the formation of a pseudocyst and the difficulties to achieve a definitive diagnosis.

So far there are only about 30 cases describing pseudocysts located in the liver, most of them are single involving the left lobe[5]. Our case indeed involved the left lobe, but the fact that there were three pseudocysts clearly separated in the surgical specimen increases the rarity of the case[6].

Two pathophysiological mechanisms have been proposed trying to explain the liver location of pseudocysts[7-10]. The first suggests a release of pancreatic juice towards the lesser sac and from there towards the left lobe of the liver along the lesser omentum or gastrohepatic ligament. Nearby the liver and due to the proteolytic effect of pancreatic juice, it may dissect the liver capsule leading to formation of subcapsular collections. When another peripancreatic fluid collection or a pancreatic pseudocyst is not associated, a direct disruption or erosion on the hepatic capsule may occur. The second mechanism proposes the propagation of pancreatic juice from the head of pancreas to the porta hepatis along the hepatoduodenal ligament resulting in formation of intraparenchymal collections. The anatomic location of the case presented here seems to be better explained by the first mechanism.

An important point of our case is the unusual evolution of liver pseudocysts. The ultrasonography performed upon admission did not detect any lesions in the liver, but the CT scan performed 6 d later vaguely identified a mass-cystic forming image. Ususally a pancreatic pseudocyst requires a minimum of time, between 4 and 6 wk, to form the well-defined wall, a main characteristic of it. However, the time span between admission and identification of our patient´s liver lesions was extremely short. It can be argued that the patient suffered from a previous pancreatitis and that the present episode might in fact be a relapsing pancreatitis, but this possibility should be rejected after thoroughly questioning both the patient and his family. Hence perhaps pseudocysts in the liver might not take as long to develop as in the abdominal cavity or near the pancreas. Unfortunately, this suggestion cannot be clarified from the scarce literature on liver pseudocysts.

The third point is the difficult diagnosis even with a complete radiological study and FNA. During the evaluation of this case, we were always concerned about an incidental neoplasia, although unseen in the first ultrasonography exploration, we never thought of a liver pseudocyst secondary to the inflammatory pancreatic process. In fact, the patient was sent to the operating room without a clear diagnosis of hepatic lesions, which was eventually established by the pathologist. The atypical radiological appearance of the pseudocysts full of debris may have contributed to the difficult diagnosis.

In conclusion, the presence of liver lesions in patients with acute pancreatitis should raise the possibility of intrahepatic pseudocysts, even when they are not associated with intraabdominal collections or pancreatic pseudocysts. The atypical radiological imaging or short clinical evolution cannot rule out this complication.