AIM: To examine how the introduction of endoscopy to gastric cancer screening affected survival prognosis in a regional population.

METHODS: The subjects comprised 4261 residents of Kamigoto, Nagasaki Prefecture, who underwent gastric X-ray examination for gastric cancer screening from 1991 to 1995, and all 7178 residents who underwent endoscopic examination for the same purpose from 1996 to 2003. The analysis evaluated trends in age-adjusted gastric cancer mortality rates and standard mortality ratios (SMRs) among the Kamigoto residents.

Endoscopic examination is gaining acceptance as a means of gastric cancer screening. The importance of gastric endoscopy is its improvement of post-treatment QOL for the growing number of patients for whom endoscopic mucosal resection (EMR) is indicated, and its most anticipated effect is improvement of survival prognosis.

However, evaluation of the effects of endoscopic examination on survival prognosis is incomplete, and a March 2006 report by the Japan Research Group on the Establishment of Appropriate Methodology and Evaluation in Cancer Screening concluded that a level of "I" for endoscopy as part of gastric cancer screening, i.e., implementation in mass screening, could not be recommended.

Regional screening in the Kamigoto treatment area has long been performed by Kamigoto Hospital in partnership with the Kamigoto town office. Of a target screening population of 7400 people, 3200 have been screened, at a rate of approximately 700-1000 screenings per year. Recruiting of applicants for endoscopic screening is performed through public notices and through activities with outpatients, and screening is free of charge to Kamigoto residents age 40 years or older. A significant number of screenings are performed as part of annual or biennial checkups, though the exact number of such screenings is unknown.

Kamigoto Hospital is a 186-bed general hospital that performs approximately 3000 upper gastrointestinal endoscopies annually. Olympus endoscopes (GIF-Q200, GIF-Q240, GIF-XQ240) are used. Although intramuscular injection of anti-cholinergic agent is given immediately before endoscopy, sedation is not generally performed. Sterilization conforms to the Guidelines of the Japan Gastroenterological Endoscopy Society, and peracetic acid preparation is used as a disinfectant.

At Kamigoto Hospital, eight physicians perform endoscopic examinations, including five internists and three surgeons. Four of them are physicians who completed residency training less than four years ago and thus have less experience performing endoscopic examinations. Diagnosis is made solely by the performing physician. Gastric cancer is diagnosed on the basis of histological examination of forceps biopsy specimens in Kamigoto Hospital.

To investigate whether reduction of gastric cancer mortality resulted from the introduction of endoscopic examination, gastric cancer cases detected by screening were evaluated in relation to various characteristics of the subjects and by evaluation of outcome (life or death), date of death, and cause of death in patients with gastric cancer for Kamigoto residents, in cooperation with the Kamigoto town office. 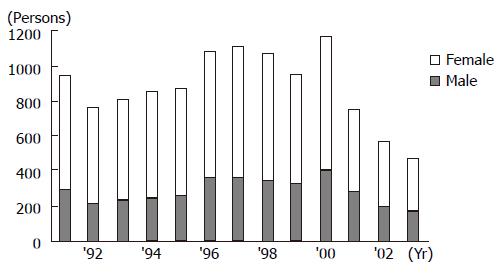 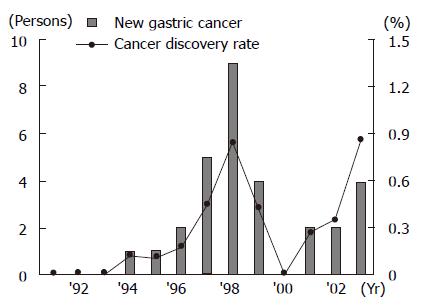 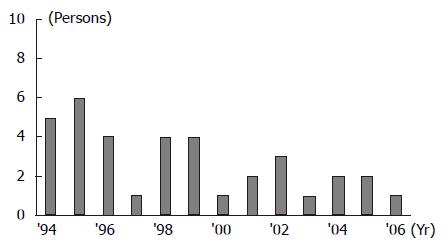 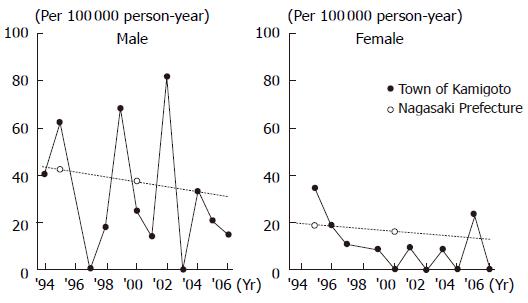 In the subject groups considered in this study, no case of incidental disease and endoscopy-related infection discovered by endoscopic examination and requiring medical intervention has yet been discovered.

Rather than compare a screening group and a non-screening group, our study examined screened individuals and used two methods to analyze outcomes before and after the introduction of endoscopic screening: a direct method, involving age-adjusted death rate, and an indirect method, involving SMR. In each case, Kamigoto subject data were compared to those from Nagasaki Prefecture. Age-adjusted death rates for the Kamigoto females were clearly lower than those for Nagasaki Prefecture. Results for the Kamigoto males were also lower overall, but also reflect poor stability of death rates, a weakness of the direct method attributable to inclusion of a small subject group. We, therefore, also evaluated results by SMR, which is applicable to analysis at the city-, town-, and village-unit levels. Analysis was performed using gastric cancer death rates for Kamigoto and for Nagasaki Prefecture, and a notable reversal was observed at the point at which endoscopic screening was introduced. Although it would be premature to conclude that endoscopic screening decreased gastric cancer deaths, this conclusion has begun to be supported by follow-up data obtained 10 years after this introduction.

Issues requiring further attention include detailed identification of high-risk gastric cancer groups, screening intervals, geriatric screening, and screening rates. Detection of H pylori infection, measurement of serum pepsinogen, and other methods have come into use in gastric cancer screening and are expected to provide screening markers for gastric cancer.

An abstract of this paper was presented at the Current Issues in Upper Gastrointestinal Endoscopy Symposium at the 70th General Meeting of the Japan Gastroenterological Endoscopy Society (DDW-Japan Kobe).