A case of an inflammatory fibroid polyp occurring in the transverse colon and diagnosed by endoscopic biopsy is reported. The patient was an 82-year-old man who visited our hospital for further evaluation of occult blood in stool. The Colonoscopy revealed a small, red, and peduncular polyp, about 6 mm in diameter, in the transverse colon. Histological examination of the biopsy specimen obtained from the polyp revealed proliferation of fibroblasts and infiltration of inflammatory cells such as plasma cells and eosinophils. This polyp was diagnosed as an inflammatory fibroid polyp, which can appear in many different locations throughout gastrointestinal tract, though still rare in the transverse colon.

Inflammatory fibroid polyp (IFP) is a relatively rare disorder, which is thought to be clinically and histologically benign, and was first described as “polypoid fibroma” in 1920 by Konjetzny[1]. It can appear in many different locations throughout the gastrointestinal tract. The most common site is the gastric antrum (in about 70% of cases), followed by the small bowel (in about 20% of cases)[2]; however, it rarely occurs in the esophagus and large intestine[3]. The tumor appears as a peduncular polyp, and is often an incidental finding on a colorectal examination for underlying disease. There have been few cases of colorectal IFP diagnosed by histological examination obtained by endoscopic biopies[4,5]. Herein we report a man diagnosed with IFP arising in the transverse colon and diagnosed by endoscopic biopsy.

An 82-year-old man visited our hospital for further evalua-tion of fecal occult blood noted in a yearly physical check-up in 2003. He had a past history of an appendectomy from over 50 years ago. No specific family history was identified. Routine hematological examinations and biochemical tests were within normal limits. The colono-scopy revealed a small, red, hard, and peduncular polyp, about 6 mm in diameter in the transverse colon (Figure 1). With conventional colonoscopy, the lesion showed type II pit pattern even though the magnifying colonoscopy was not performed, and we speculated that this polyp was non-neoplastic. This polyp was suspected to be a hyperplastic polyp or hamartoma from endoscopic findings. Histological examinations of the biopsy specimen revealed proliferation of fibroblasts and infiltration of inflammatory cells such as plasma cells and eosinophils. The peduncular polyp was diagnosed as an inflammatory fibroid polyp occurring in the transverse colon. The patient rejected a follow-up colonoscopy because of his advanced age. 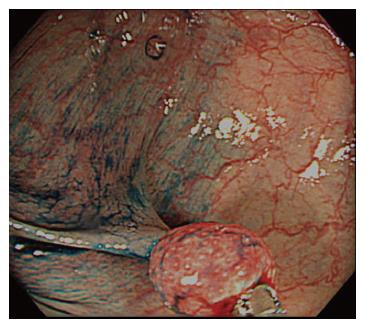 Figure 1 Endoscopic appearance of the transverse colon. A red, hard, and peduncular polyp, about 6 mm in diameter was seen. The lesion showed type IIpit pattern. Endoscopic biopsy was performed to confirm the histological diagnosis.
DISCUSSION

IFP is a rare submucosal lesion of the gastrointestinal tract that usually appears as a smooth sessile or pedunculated polyp and follows a benign course. The pathogenesis of IFP remains unknown. Some authors have proposed that IFP is caused by an allergic reaction to inflammatory stimuli such as bacterial, chemical, traumatic stimuli, etc, or is a reactive lesion of fibroblastic or myofibroblastic nature[4]. Others have proposed that IFP is neurogenic in nature[4,5]. A familial relationship has been described, with multiple recurrent lesions affecting three successive generations[6].

It may occur anywhere throughout the gastrointestinal tract, and the most common site is the gastric antrum, followed by the small bowel, and rarely the colon; however, recent advances in diagnostic techniques, especially the widespread use of colonoscopy for colorectal tumors, have enabled us to identify small and asymptomatic polyps, and reports of IFP of the colon have been increasing.

According to Nakase et al[7], a review of Japanese literature, revealed 25 cases of IFP in the large intestine in Japan up to 2000. They described that the macroscopic appearance is the pedunculated type in 68% of cases, and the sessile type in 32%. In that report, the sites of IFP in the large intestine were studied and 8 of 25 cases (32%) had lesions in the transverse colon and 13 of 25 patients (52%) had lesions in the ascending colon or cecum. Thus, IFPs of the large intestine are predominantly in the proximal colon. IFPs in the gastrointestinal tract are usually asymptomatic and are often detected incidentally on barium enema or endoscopy[7]. Another review of Western literature revealed that the main clinical features of colonic IFPs are abdominal pain (54%), bloody stools (33%), weight loss (21%), diarrhea, and anemia (17%)[2].

There are no reports describing the pit pattern of the mucosa covering colonic IFP. Two kinds of endoscopic findings of the surface of colonic IFP are described as follows: (1) covered with normal colonic mucosa like submucosal tumors[7], and (2) irregular surface redness. In the present case, hyperplastic changes in the normal colonic mucosa covering IFP might cause type II pit pattern. We speculated that an endoscopic diagnosis of colonic IFPs could seldom be made by surface observation because most fibroids are located in the submucosa of colonic IFPs. The final diagnosis of colonic IFP depends upon pathological findings. However, further studies on the endoscopic findings of the surface of colonic IFP observed by magnifying colonoscopy are certainly required.

In conclusion, we reported a case of inflammatory fibroid polyp occurring in the transverse colon that was diagnosed by endoscopic biopsy. IFP should generally be taken into consideration as a differential diagnosis of peduncular polyp of the colon. IFP of the large intestine is not fatal and patients remain asymptomatic in their daily lives except for gastrointestinal bleeding or bowel obstruction; therefore, it is likely that, in the future,there will be many latent patients with colorectal IFP who might be incidentally discovered.