To report an extragastrointestinal stromal tumor (EGIST) that occurs outside the gastrointestinal tract and shows unique clinicopathologic and immunohistochemical features. In our case, we experienced multiple soft tissue tumors that originate primarily in the greater omentum, and in immunohistochemical analysis, the tumors showed features that correspond to malignant EGIST. Two large omental masses measured 15 cm x 10 cm and 5 cm × 4 cm sized and several small ovoid fragments were attached to small intestine, mesentery and peritoneum. On histologic findings, the masses were separated from small bowel serosa and had high mitotic count (115/50 HPFs). In the results of immunohistochemical stains, the tumor showed CD117 (c-kit) positive reactivity and high Ki-67 labeling index. On mutation analysis, the c-kit gene mutation was found in the juxtamembrane domain (exon 11) and it was heterozygote. Platelet-derived growth factor receptor (PDGFR) gene mutation was also found in the juxtamemembrane (exon 12) and it was polymorphism. From above findings, we proposed that there may be several mutational pathways to malignant EGIST, so further investigations could be needed to approach this unfavorable disease entity.

In GIST, several studies have revealed various types of c-kit oncogene mutations, including exon 11 encoding the juxtamembrane domain, exon 9 encoding the extracellular domain, exon 13 and 17 encoding the tyrosine kinase domain[4]. Moreover, the mutations of platelet-derived growth factor receptor (PDGFR) at the juxtamembrane domain (exon 12) and tyrosine kinase domain (exon 18) were reported in some populations of GIST[5]. Also, c-kit and PDGFR mutations in EGIST were reported in some series[6].

A 64-year old man was admitted to internal medicine department due to right and lower quadrant abdominal mass. Ultrasonography revealed multiple round homogenous hypovascular hypoechoic mass lesions in the mesentery. The masses were variable in size from 1 cm to 2.5 cm in diameter (Figure 1). Preoperative computed tomography revealed 7cm and 5.5 cm sized mass lesions adjacent to small bowel loop in left abdomen and ill defined low density and cystic change in it. There were multiple mesenteric and omental masses in right abdomen that combined ill defined infiltration and streaky density (Figure 2). The patient underwent preoperative ultrasonography-guided biopsy with 18 gauge needle for pathologic diagnosis and the result was highly suspicious for extragastrointestinal stromal tumor and high cellularity, high mitotic count, marked nuclear atypism and necrosis supported the high risk nature of this tumor. 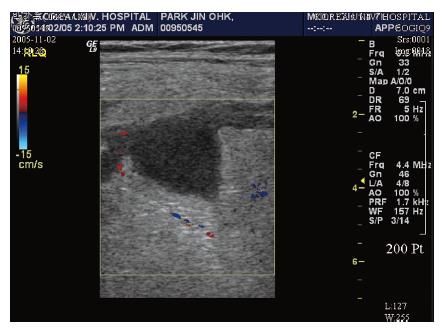 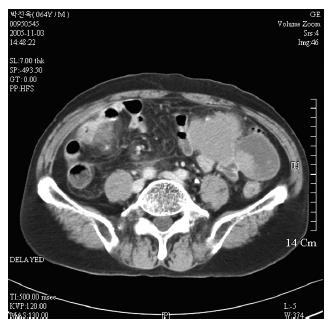 The results of immunohistochemical stains were positive for Vimentin and c-kit (CD117) and negativities for CK (Cytokeratin), SMA (Smooth muscle actin), S-100 protein, Desmin and CD34. The Ki-67 labeling index was increased and the proportion was about 30%-40%.

After transfer to our department, we performed exploration so that multiple tumor de-bulking was performed. On operative findings, multiple tumor masses were resected: about 5 cm sized whitish mass adjacent to small bowel mesentery 80 cm distant distal to Treitz` ligament, two large soft tissue masses of 15 and 5cm sized on greater omentum. A variable sized numerous polypoid masses were noted on the small and large intestines mesentery and peritoneal surfaces; they were removed as much as possible. On 60 cm distant proximal to ileocecal valve, there was conglomerated mass adhescent to small bowel mesentery, so we performed segmental resection of small intestine.

On gross findings, the specimen consisted of two irregular fragments of omental tissue, it measured 15 cm × 10 cm × 5 cm in the larger one and 5 cm × 4 cm × 2 cm in the smaller one and several irregular fragments of soft tissue masses measured 6 cm × 6.5 cm × 4 cm in the largest one (Figure 3A). On section, the cut surface showed diffuse pale brownish flesh-like appearance with multiple hemorrhagic necrosis (Figure 3B). 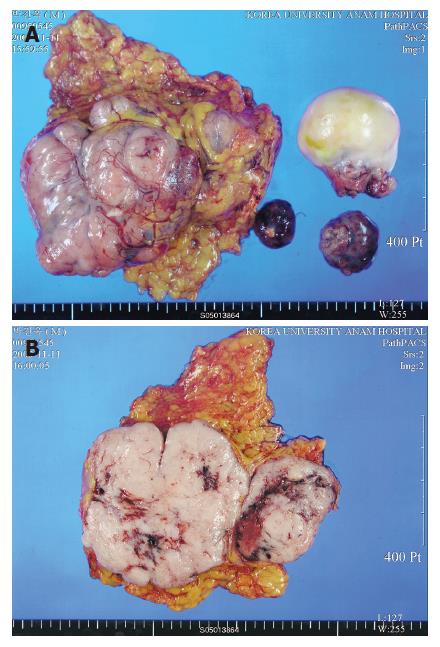 On immunohistochemical findings, the spindle cells showed cytoplasmic positive reactivity for CD 117 (c-kit) (Figure 4A) and Ki-67 labeling index was increased (Figure 4B). On histologic findings, the tumor was composed of spindle cells showing a less developed fascicular pattern and had a high mitotic activity, that is about 115/50 HPFs mitotic counts (Figure 4C and D). 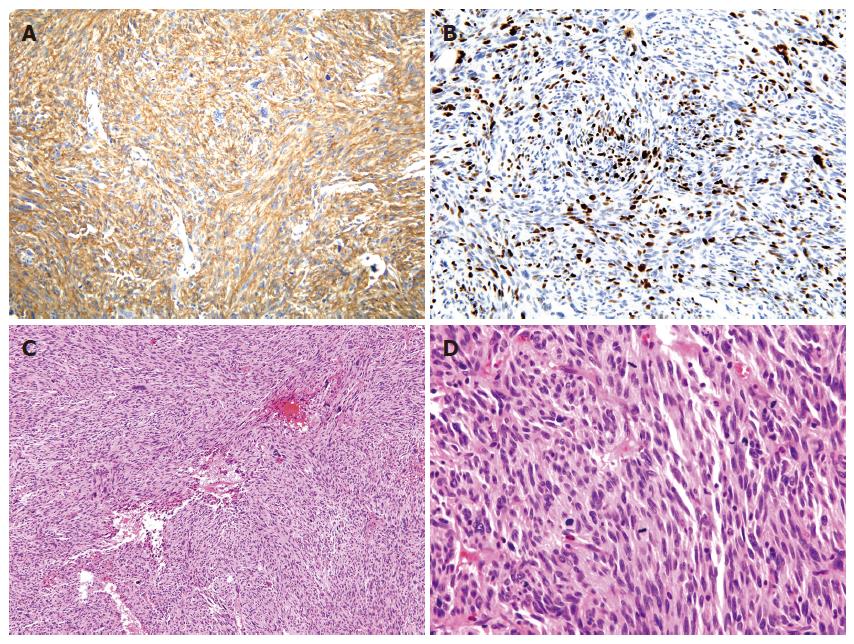 Figure 4 A: The spindle cells showed cytoplasmic positive reactivity for CD 117 (c-kit) on immunohistochemical findings; B: Ki-67 labeling index was about 30%-40% on immuno-histochemical findings; C: The tumor was composed of spindle cells showing a less developed fascicular pattern on histologic findings (x 100); D: The tumor had a high mitotic activity, about 115/50 HPFs mitotic counts on histologic findings (x 400). 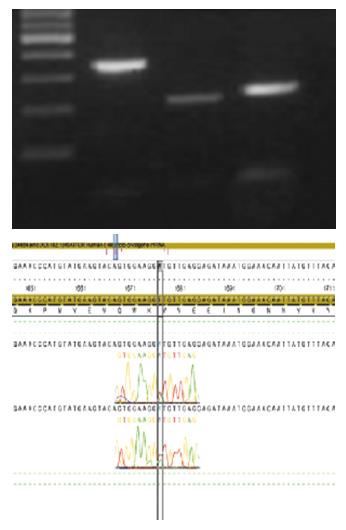 The mutation of PDGFRA exon 12 was also found to be a polymorphism, showing CAA (pro.) to CCG (pro.) transition at codon 567 (Figure 6). 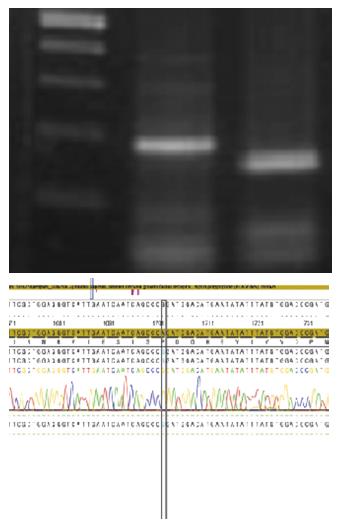 Figure 6 There was a polymorphism on exon 12, showing CAA (pro. ) to CCG (pro.) transition at codon 567 in mutation of PDGFRA.

After operation, the patient was discharged without any postoperative problem and he was treated with imatinib mesylate (Gleevec®, Norvatis Pharma, Basel, Switzerland). There was no recurrence of the tumor at the follow up examination.

EGIST is histologically and immunohistochemically similar to their gastrointestinal counterpart but they have an aggressive course resembling small intestinal stromal tumors and they have no or little connection to the abdominal wall or serosal surface of the gastrointestinal tract[3].

Although the histogenesis of EGISTs has not been determined, the expression of the c-kit receptor in E-GISTs suggests either the presence of pacemaker cells outside the gastrointestinal tract or the ability of the mesenchymal elements to recapitulate this phenotype aberrantly. In contrast to studies of GISTs, those of EGISTs did not report any association between the tumor size and outcome. It is believed that this can be best explained by the fact that the majority of EGISTs are large when first detected. This is because small EGISTs are rarely encountered as they hardly ever produce symptoms that lead to detection. Therefore, as Ortiz-Rey et al [9]reported, when first detected, many cases of EGISTs can be accessible by a fine needle aspiration biopsy (FNAB).

In our case, preoperative diagnostic findings were compatible with small intestinal GIST, and small bowel segmental resection was performed because the tumor was adhered to serosal surface of the intestine. But, in pathologic reports, two large omental masses were primary tumors and multiple nodules adjacent to small intestine and peritoneal surface were proved to be metastatic lesions. So, final diagnosis was EGIST.

Prediction of the malignant potential of tumors is important. The size, cellularity, and mitotic activity of EGISTs were reported as the most accurate predictors of adverse outcome[7]. Reith et al[3] proposed that in a multivariate analysis mitotic activity and necrosis displayed trends toward independent predictive value.

In our case, the large size (about 15 cm), high mitotic counts (115/50 HPFs) and extensive hemorrhagic necrosis were malignant features, so this tumor belongs to high risk group.

Recently, CD117 (the c-kit protooncogene protein product) has been shown immunohistochemically in EGISTs[4]. CD117 is a transmembrane receptor for a growth factor termed stem cell factor and is expressed in hematopoietic stem cells, mast cells, germ cells, and melanocytes[1]. It is believed to be important in the development and maintenance of these cell populations. Furthermore, CD117 is present in a neural-related population of gastrointestinal mesenchymal cells, the interstitial cells of Cajal located in the muscular layers. These cells are functionally important for gastrointestinal motility and show pacemaker activity[4,6].

Most omental and mesenteric tumors showed histologic features similar to GISTs with elongated spindle cells or epithelioid cells with high cellularity; most of these tumors showed low mitotic activity[1]. Omental and mesenteric GISTs were typically positive for CD117 and less consistently for CD34. They often showed smooth muscle actin reactivity but were virtually negative for desmin and S-100 protein[10].

In our case, the results of immunohistochemical stains were positive for c-kit protein, but showed negative results for CD 34, SMA (smooth muscle actin), and S-100 protein, E-cadherin. In Yamamoto's study[6], in EGIST, high Ki-67 labeling index (≥ 10% HPF) had significantly shorter survival than those with a low index (≤ 10%). Our cases showed high Ki-67 labeling index (about 30%-40%) and that result also showed high-risk nature.

In recent studies, the PDGFRA mutation may play an important role in the small population of EGISTs[6,7,11]. Until now, there was no report that one EGIST tumor showed c-kit and PDGFRA mutations simultaneously. In our case, tumor specimen contained multiple c-Kit and PDGFRA mutations, so it may be the first case reporting two important genetic alterations in one tumor that corresponds to malignant EGIST.

From above findings, we proposed that there may be several mutational pathways to malignant EGIST, so further investigations could be needed to approach this unfavorable disease entity.

STI-571 (Gleevec) is a small molecule that selectively inhibits the tyrosine kinase activity of the abl (bcr-abl), PDGFR, and c-kit [12]. In our case, the patient is now treated with tyrosine kinase inhibitor for multiple and malignant characteristics. Although the effect of STI-571 for PDGFRA-mutant GISTs has not been established, PDGFRA may become a molecular therapeutic target of STI-571 in at least some populations of EGISTs.