AIM: To study the significance of scoring systems assessing severity and prognostic factors in patients with colonic perforation.

Colonic perforation is a major life-threatening condition associated with high morbidity and mortality rates. Despite recent advances in surgical treatment and intensive medical care, mortality rates remain around 15%-30%[1-7]. One reason for this high mortality rate is that peritonitis due to perforation affects the general condition and leads to complications causing multiple organ failure such as respiratory failure, renal failure and sepsis. Thus, any study of the factors affecting mortality in colonic perforation requires not only measurement of individual clinical and laboratory data, but also evaluation of disease severity from a systemic perspective. To assess severity, scoring systems such as the acute physiology and chronic health evaluation II (APACHE II) and Mannheim peritonitis index (MPI) have been used[5-8]. However, consensus has not yet been reached regarding an ideal and generally accepted scoring system. We reviewed our experience with surgical and intensive treatment of colonic perforation, and retrospectively studied factors affecting the prognosis and significance of scoring systems for this disease.

Between 1993 and 2005, we operated on 26 patients (9 men, 17 women) with peritonitis due to colonic perforation. Medical records were reviewed and data were collected regarding clinical data such as sex, age, degree of peritonitis (Hinchey’s stage[9], blood pressure preoperatively and 24 h postoperatively, white blood cell count (WBC), levels of serum protein, potassium, creatinine and BUN, PaO2/FiO2 ratio (P/F ratio), and pH. Preoperative and Postoperative Acute Physiology Score (APS), APACHE II[10], MPI[11] and Peritonitis Index of Altona (PIA II)[12] were calculated. Patients were divided into survivors and non-survivors, and clinical data and scores were compared between groups. 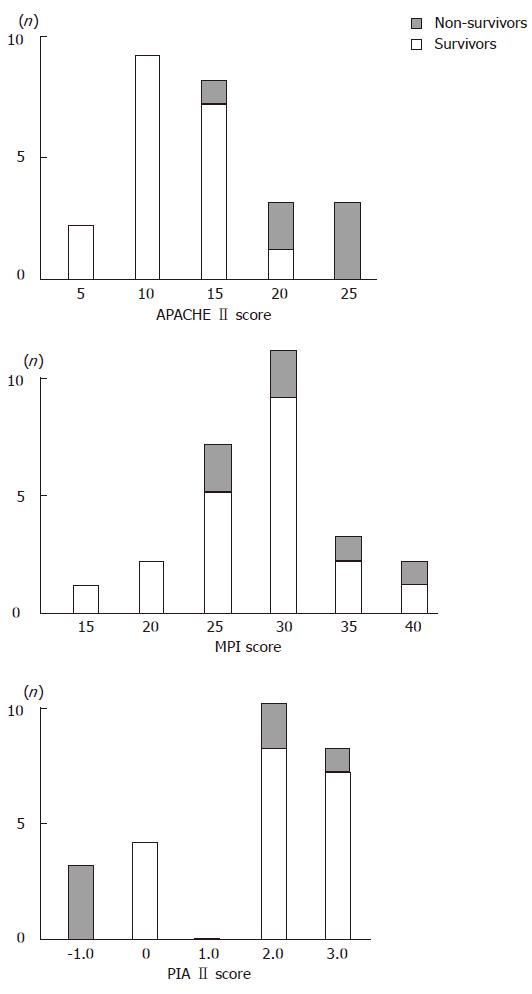 Figure 1 Distributions of APACHE-II, MPI and PIA-II scores for survivors and non-survivors.

Factors influencing the prognosis of patients with colonic perforation have been reviewed from various perspectives, including pre- and postoperative laboratory data, intraoperative findings, and operative procedures. Age > 70 years, preoperative base excess (BE), presence of shock, platelet count, postoperative WBC and number of organ failures have all been reported as factors influencing prognosis[1-7]. The present study showed that preoperative mean blood pressure and serum creatinine level are associated with mortality following colonic perforation. In addition, postoperative respiratory function influences mortality. Non-survivors P/F ratio decreased substantially from a preoperative mean of 314.2 to a postoperative mean of 126.2, while P/F ratio in survivors decreased only slightly. These findings indicate that respiratory function became lower in non-survivors than in survivors following operative stress.

Various scoring systems have been used to indicate prognosis of patients with colonic perforation[13]. These systems can be broadly divided into two groups: disease-independent scores for evaluation of serious patients requiring care in the intensive care unit (ICU) such as APACHE II, Simplified Acute Physiology Score (SAPS II)[14]; and peritonitis-specific scores such as MPI and PIA II. MPI is calculated using simple factors such as degree of peritonitis, age, sex and time from perforation to operation, and offers a useful tool. Actually, MPI has been reported to be strongly associated with prognosis of patients with colonic perforation[1,3,6]. However, the present study revealed that survivors included patients with high and low MPI. No significant difference in MPI was identified between survivors and non-survivors. Although macroscopic degree of peritonitis seemed equal, the actual damage to the body of individual patients differed in degree. Time from perforation to operation could not be precisely measured, as it is difficult to detect the time of perforation in elderly patients[7]. Whether preoperative duration was more or less than 24 h represented a vague division, so patients with various degrees of injury were judged to display the same score. In contrast, physiological scoring systems such as APACHE II or SAPS II seem to reveal preoperative status of the patient more precisely than MPI, as such scoring systems put > 10 kinds of laboratory data together in calculation.

A previous study compared changes in APACHE II score between survivors and non-survivors among emergency surgically-treated patients[15]. Scores in both groups increased immediately postoperatively. Scores of survivors subsequently decreased, and significant differences between groups were apparent by postoperative d 10. Various reports have indicated that preoperative scoring systems are useful in predicting risk of death in patients with colonic perforation. However, it is difficult to use scoring systems for postoperative monitoring because of the need to measure numerous laboratory parameters. In addition, development of a new scoring system to aid management of peritonitis has been described, including not only APACHE II, but also intraoperative findings such as operation success and organ failure score[16]. A larger number of cases need to be reviewed to assess this new scoring system.

Scoring systems for colonic perforation allow objective and systematic assessment of the severity of disease, and prediction of prognosis. Such systems seem useful in comparing the effectiveness of treatment by disease severity. Therapeutic choice may be facilitated by severity according to scoring systems in the future, but no ideal and generally accepted scoring system is presently available. APACHE II has been reported as a useful scoring system for predicting outcomes at the beginning of treatment with good discrimination, but the significance of APACHE II has been questioned when deciding therapies for patients with unsuccessful initial treatment[17,18]. Multiple organ system failure (MOSF) has been reported as the only indicator for therapeutic decision-making in such situations[19]. APACHE II may not be suitable for longitudinal evaluation of disease.

One of the treatments contributing to improved survival rate in colonic perforation is blood purification, such as CHDF. Patients whose postoperative renal and respiratory failure improve following cytokine adsorption or adaptation of water balance are more likely to survive[21]. Our study showed that APACHE II and MPI scores were higher in patients with CHDF than in patients without CHDF. CHDF thus appears to be indicated for patients with high scores. However, our study also showed that all patients with preoperative APACHE II > 20 died, and no treatment is expected to be effective in such patients. Judging the indications for CHDF by observing postoperative state is important, and indications for CHDF cannot be decided based on preoperative score alone. At least, patients with high preoperative score need to be treated in an institution that can perform blood purification treatment. Scoring systems seem likely to become one of the indices for deciding where patients should be treated.

Our study revealed that pre- and postoperative mean blood pressure and serum creatinine level are associated with prognosis of colonic perforation. Progression of postoperative respiratory failure was more extensive in non-survivors than in survivors. For scoring systems, APACHE II score was most strongly associated with poor prognosis, and scores > 15 were significantly correlated with mortality.