Telerobotic surgery is the most advanced development in the field of minimally invasive surgery. The da Vinci surgical system, which is currently the most widely used telerobotic device, was approved by the Food and Drug Administration of the United States of America for clinical use in all abdominal operations in July 2000. The first da Vinci surgical system in China was installed in November 2005 at our institution. We herein report the first telerobotic-assisted laparoscopic abdominoperineal resection using the 3-arm da Vinci surgical system for low rectal cancer in Hong Kong and China, which was performed in August 2006. The operative time and blood loss were 240 min and 200 mL, respectively. There was no complication, and the patient was discharged on postoperative day five. An updated review of published literature on telerobotic-assisted colorectal surgery is included in this report, with special emphasis on its advantages and limitations.

The minimally invasive or laparoscopic approach has revolutionised surgical care over the past two decades. Since the introduction of laparoscopic cholecystectomy in 1987, laparoscopic surgery has been attempted and applied to many surgical operations, including resection of benign and malignant colorectal diseases[1]. Although the laparoscopic approach in colorectal surgery has been shown to be beneficial and oncologically safe[2-4], its use is still not yet widespread[5,6]. This restriction may be due to the technical difficulties and the steep learning curve associated with these complex procedures[7]. Conventional laparoscopic surgery has many inherent technical drawbacks, including unstable video camera platform, lack of stereoscopic or three-dimensional (3D) vision, limited motion of straight instruments, long instruments that can increase physiological hand tremor, and poor ergonomics for the surgeon[8]. The introduction of the telerobotic surgical systems may offer potential solutions to the above-mentioned problems.

The da Vinci surgical system (Intuitive Surgical, Inc., Sunnyvale, CA) was developed to facilitate laparoscopic surgery and overcome its disadvantages[9]. This telerobotic system comprises three main components: the robotic cart with three or four mechanical arms, the console, and the endoscopic stack. The operating surgeon sits comfortably at the console, with his hands placed on master handles. His movements are then translated via computer software to the robotic arms at the site of the operation. The system provides a magnified 3D view and intuitively transfers movements from the handle to the tip of the instrument with tremor filtering. Dexterity is enhanced via EndoWrist (Intuitive Surgical, Inc., Sunnyvale, CA) technology, returning seven degrees of freedom to the surgeon, so that precise manoeuvres like anastomosis can be accomplished easily. The system can actually facilitate less experienced surgeons to perform minimally invasive surgery in a smooth and more ergonomically manner.

The Food and Drug Administration of the United States of America approved the da Vinci surgical system for clinical use in all abdominal operations in July 2000. The first reported telerobotic-assisted laparoscopic colorectal procedures were performed in late 2000 in Japan[10]. Since then, there have been a small number of series in the literature describing the use of telerobotic systems in the field of colorectal surgery[11-17]. The first da Vinci surgical system in China was installed in November 2005 at our institution in Hong Kong. We herein report the first telerobotic-assisted laparoscopic abdominoperineal resection using the 3-arm da Vinci surgical system for low rectal cancer in Hong Kong and China, which was performed in August 2006. An updated review of published literature on telerobotic-assisted colorectal surgery is included in this report, with special emphasis on its advantages and limitations.

A 49-year-old woman with a body mass index of 25.2 kg/m2 presented with rectal bleeding associated with constipation and tenesmus for one year. Her past medical history included hypertension and diabetes mellitus. Colonoscopy revealed a tumour at the lower rectum 3 cm above the anal verge, and biopsy confirmed the diagnosis of adenocarcinoma. Computed tomography showed no evidence of loco-regional invasion or distant metastasis. The patient underwent telerobotic-assisted laparoscopic abdominoperineal resection using the 3-arm da Vinci surgical system on August 25, 2006. The patient understood that this was the first case of its kind in Hong Kong and China, and informed consent was obtained prior to surgery. Mechanical bowel preparation was carried out one day before surgery with sodium phosphates oral solution. Systemic prophylactic antibiotics (1.5 g cefuroxime and 500 mg metronidazole) were administered intravenously at induction of general anaesthesia.

The operating surgeon and the assistants were skilled in both laparoscopic and colorectal surgery. All members of the surgical team had also undergone a specific two-day robotic-assisted animal laparoscopic surgery training course before the surgery, which consisted of didactic and practical application sessions covering the components and use of the da Vinci surgical system and EndoWrist instruments on live animals. Live telerobotic surgery on patients was also demonstrated. 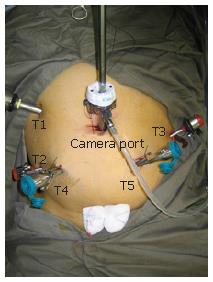 The first part of the surgery was carried out laparo-scopically. The operating surgeon used T1 and T2 for dissection, while the assistants held the camera and T3. With the patient tilted head down, the sigmoid-descending colon was mobilised along the white line of Toldt. The left ureter was identified and protected. The inferior mesenteric vessels were transected distal to the left colic vessels with EndoGIA staplers (Autosuture, Tyco Healthcare, Norwalk, CT).

After complete laparoscopic mobilisation of the sigmoid-descending colon and transection of the lymphovascular pedicle, the 3-arm da Vinci surgical system was brought onto the field. With the patient still in the head-down position, the three robotic arms were docked to the camera port and ports T4 and T5 as shown in Figure 2. The operating surgeon sat at the console in the operating theatre and controlled the robotic camera and the two robotic arms. The left robotic arm (T5) carried a Cadière forceps while the right robotic arm (T4) carried a monopolar cautery hook (Figure 3). The assistants stood on both sides of the patients using T1, T2, and T3 for suction and retraction. The rectosigmoid mesentery was retracted superiorly and anteriorly, and the Holy plane was entered. Total mesorectal excison was performed with the da Vinci surgical system down to the pelvic floor. The ureters, the hypogastric nerves, and the pelvic parasympathetic plexus were carefully identified and safeguarded. 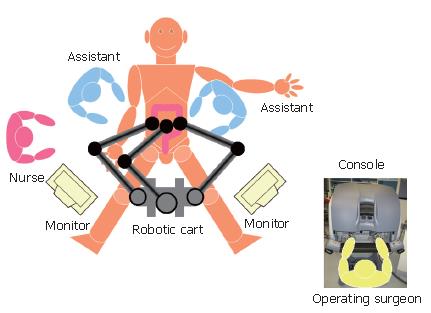 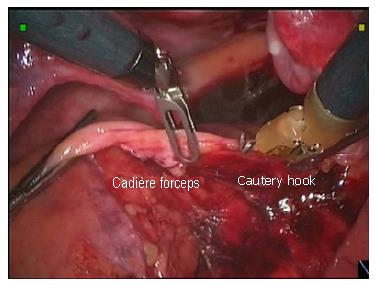 Figure 3 Intraoperative photograph showing the Cadière forceps in the left robotic arm and the monopolar cautery hook in the right robotic arm.

The da Vinci surgical system was disengaged after rectal mobilisation was completed. The sigmoid colon was transected with EndoGIA staplers; an abdominal wall opening was created by excision of port T5, and the proximal sigmoid colon was drawn through this opening to form an end colostomy. Perineal dissection was then performed, and the resected specimen was retrieved through the perineal wound. The perineal wound was closed primarily with a drain put in the pelvic cavity via a separate stab wound.

The total operative time was about 240 min, with 45 min spent on insertion of trocars and laparoscopic mobilisation of the sigmoid colon, 15 min spent on docking of the da Vinci surgical system, 120 min spent on telerobotic-assisted rectal mobilisation, and 60 min spent on perineal dissection and creation of colostomy. The intraoperative blood loss was 200 mL and no blood transfusion was required.

Pathological examination of the resected specimen revealed moderately differentiated adenocarcinoma with invasion into the muscularis propria but not through it yet. One out of sixteen removed lymph nodes showed metastasis. At the time of writing of this report (five months after the surgery), the patient is still undergoing adjuvant therapy. She remains well and asymptomatic.

We have chosen to start our telerobotic-assisted colorectal surgery programme with a case of rectal resection. One of the reasons is that the telerobotic surgical systems have been considered to be particularly useful when the operative field is small and precise dissection is required. In colonic surgery, most of the dissection entails up-and-down and left-to-right movement in different quadrants of the peritoneal cavity; the small excursion arcs of the robotic arms may not adequately encompass this wide field of dissection, and thus repositioning of the patient and the robotic cart is often necessary. We feel that the telerobotic surgical system may be more useful in rectal surgery because the robotic arms can allow for very accurate dissection in the confined pelvic space, and the magnified 3D vision can give an excellent view of the pelvic anatomy. In order to avoid repositioning of the robotic cart during surgery, we mobilised the sigmoid-descending colon with conventional laparoscopic techniques first, before we brought in the robotic cart for telerobotic-assisted rectal mobilisation. With this hybrid technique, our case can be finished within 240 min, which compares favourably with the mean operative time of 215 min in our previous report on laparoscopic-assisted abdominoperineal resection for low rectal cancer[19].

Table 2 summarises the published studies comparing telerobotic-assisted colorectal surgery using the da Vinci surgical system versus conventional laparoscopic colorectal surgery[20-23]. In the largest comparative study to date, D'Annibale et al[21] compared 53 telerobotic-assisted with 53 conventional laparoscopic colorectal procedures, ranging from partial/total colectomies to abdominoperineal resections. No differences were observed in the total time of surgery (telerobotic group, 240 min vs laparoscopic group, 222 min), time to recovery of bowel function, and duration of hospital stay. The only significant difference was a longer setup time to prepare for the operating theatre and the patient in the telerobotic group (24 min vs 18 min; P = 0.002). In a more recent study by Pigazzi et al[23], 6 telerobotic-assisted total mesorectal excisions (TME) were compared with 6 conventional laparoscopic TME. The two groups were not different in total operative time (telerobotic group, 4.4 h vs laparoscopic group, 4.3 h), complication rates, and duration of hospital stay. However, surgeons in the telerobotic group reported less fatigue and less strain after surgery. Interestingly, the issue of cost was only addressed in the first comparative study[20], which reported additional direct equipment costs of approximately US$ 350 per case for the robotic group, without including acquisition and maintenance costs for the telerobotic surgical system.

Although most of the published studies on telerobotic-assisted colorectal surgery have shown comparable results when compared to conventional laparoscopic surgery, none have yet demonstrated a clear advantage to using the telerobotic system in colorectal surgery. Other limitations of applying this technology to the field of colorectal surgery include lack of tactile feedback, limited instrumentation, inconvenience of rotating or tilting the patient during surgery, and need for repositioning to facilitate dissection in different quadrants of the abdomen during surgery. Besides, precise manoeuvres like anastomosis are seldom required in colorectal surgery. Nevertheless, with continued refinement in technologies and techniques, many of the above-mentioned limitations can be overcome. Undoubtedly, the telerobotic system can benefit the surgeons by providing excellent dexterity, vision, and ergonomics, but whether this can be translated into better patient outcomes still needs further evaluation.