AIM: To explore the capability of a monoclonal antibody (mAb) against murine endoglin to inhibit tumor angiogenesis and suppression of hepatoma growth in murine models.

METHODS: A monoclonal antibody against murine endoglin was purified by affinity chromatography and passively transfused through tail veins in two murine hepatoma models. Tumor volume and survival time were observed at three-day intervals for 48 d. Microvessels in tumor tissues were detected by immunohistochemistry against CD31, and angiogenesis in vivo was determined by alginate encapsulated assay. In addition, tumor cell apoptosis was detected by TUNEL assay.

Liver cancer is the 5th leading cancer type in the world[1,2]. Despite aggressive therapeutic approaches made in the past decades, the prognosis of liver cancer remains poor, 5-year mortality exceeds 95%[1-3]. It is thus necessary to seek other more rational approaches for treatment of liver cancer.

Endoglin is a homodimeric transmembrane glyco-protein, which was initially identified as a human leukemia-associated homodimer cell-membrane antigen[4]. Studies performed in different laboratories using various antibodies to endoglin have revealed endoglin expression and up-regulation in a wide range of tumor endothelia, but seldom found in the endothelia of normal tissues, suggesting that endoglin is highly related to tumor angiogenesis[5,6]. In addition, another study demonstrated that blockage of the endoglin pathway in human umbilical vein endothelial cells resulted in marked a inhibition of in vitro angiogenesis in combination with TGF-®, indicating that endoglin is a pro-angiogenic component in the endothelial cells[7]. Therefore, therapeutic approach targeting endoglin may potentially have the capability of avoiding system side-effects. It is thus conceivable to consider that passive immunotherapy with anti-endoglin mAb may potentially have the capability of inhibiting tumor growth and/or tumor metastasis through interference of the endoglin-related angiogenesis pathway. In our previous study, we have established a hybridoma cell line secreted monoclonal antibody (mAb) against murine endoglin, which has been demonstrated to have the capability of specifically staining with recombinant murine endoglin and tumor microvessel density by Western blot and immunohistochemistry[8]. In the current study, we produced and purified the mAb, and then passively transfused with the mAb in two murine hepatoma models to observe the therapeutic effects against hepatoma.

Production and purification of antibodies

The production and purification of the mAb against murine endoglin were carried out as previously described[8]. Briefly, the EMAM hybridoma cell line mEDG was cultured in complete EMAM medium supplemented with 100 mL/L fetal calf serum at 37°C in a humidified atmosphere containing 50 mL/L CO2 in air. Hybridoma cells grown at log-phase were collected and 5 × 106 cells (in 2 mL suspension) were intraperitoneally injected into nude mice. About one to two weeks later, the ascetic fluid was harvested, purified by affinity chromatography (CM Affi-Gel blue gel kit) following the manufacturer's instructions. In addition, for control observation, antibodies were also purified from the sera derived from the normal mice at 12 wk of age by affinity chromatography as previously performed by us[9].

To determine microvessel density (MVD), frozen sec-tions of tumor tissues were prepared, and subjected to immunohistochemical staining for CD31 as previously described[9-12]. Briefly, frozen sections were fixed in acetone, incubated, and stained with an antibody reactive to CD31. Sections were then stained with labeled streptavidin biotin reagents. Any endothelial cell or endothelial cluster positive for CD31 (purple staining) was considered to be a single countable microvessel.

Alginate-encapsulated tumor cell assays were performed as previously described[13]. Briefly, Hepal-6 or H22 hepatoma cells were resuspended in a 15 g/L sodium alginate solution and added dropwise into a swirling 37°C solution of 250 mmol/L calcium chloride. Alginate beads were formed containing approximately 1 × 105 tumor cells per bead. Mice were anesthetized, and four beads were subcutaneously implanted into an incision made on the dorsal side. Incisions were closed with surgical clamps. Thereafter, mice were grouped and treated with antibodies or NS as aforementioned. After 14 d, mice were injected intravenously with 100 μL of 100 mg/kg FITC-dextran solution. Beads were surgically removed and FITC-dextran was quantified against a standard curve of FITC-dextran as previously described[9-12].

To detect in situ tumor cell apoptosis, sections of tumor tissues from both Hepal-6 and H22 models were fixed with 10 g/L paraformaldehyde in PBS, and apoptotic cells were detected using TUNEL assay according to the manufacturer's instructions (In Situ Cell Death Detection kit, Roche, USA). Apoptosis rate was quantified in a blind fashion by two independent reviewers by determining the percentage of positively stained cell nuclei in 20 randomly chosen fields/section at 200 × magnification.

For comparison of individual time points, ANOVA and an unpaired Student's t-test were used. Kaplan-Meier method was used to plot survival curves and the statistical significance was determined by the log-rank test. P < 0.05 was considered statistically significant. Error bars represent the SD (standard deviation) unless otherwise indicated. 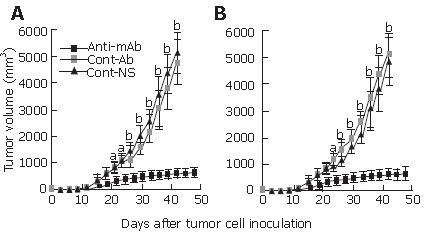 The survival rate of the tumor-bearing mice was also monitored at a three-day interval. Compared with the control group mice treated with normal antibodies or NS, the survival rate of the mice passively transfused with anti-endoglin mAb significantly increased in both Hepal-6 (Figure 2A) and H22 (Figure 2B) models (P < 0.01 by log-rank test). Thus, significant increase in survival rate and inhibition of tumor growth in the two hepatoma models suggested that passive immunotherapy with an anti-endoglin mAb has significant therapeutic effects against murine hepatoma. 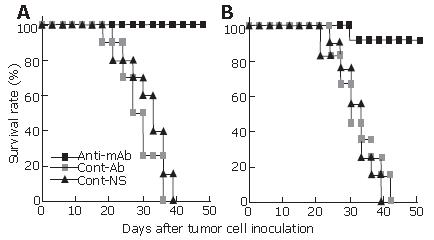 Figure 2 The survival rates at different time-points in Hepal-6 (A) and H22 (B) models. Log-rank test, P < 0.01, n = 10 in each group.
Inhibition of tumor angiogenesis in tumor tissues 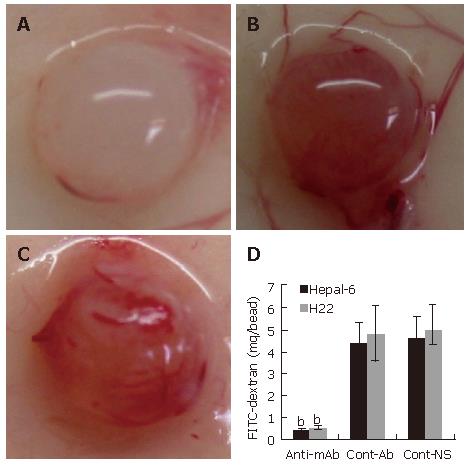 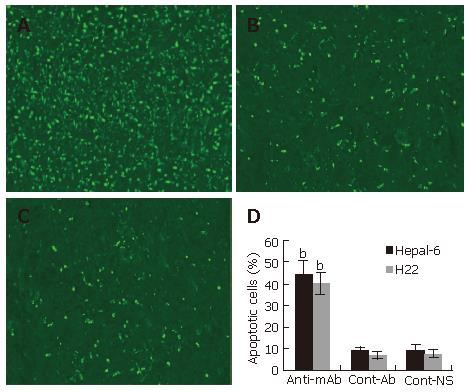 The generation of new blood vessels, or angiogenesis, is a complex multi-step process. Evidence suggests that the growth and persistence of solid tumors and their metastases are angiogenesis-dependent[14-17]. To date, a number of molecules that stimulate angiogenesis as well as those that inhibit this process have been elucidated[17,18]. In this regard, as a strategy for cancer therapy, anti-angiogenic therapy, which targets genetically stable endothelial cells, has several advantages over conventional tumor cell targeting in the therapy of solid tumors: (1) This approach may have the potential to circumvent the problem of acquired drug resistance[19,20]. The reasonable explanation is that drug resistant mutants are easily generated from tumor cells due to the genetic instability of tumor cells. On the contrary, genetically stable normal cells, such as vascular endothelial cells, would be far less adept at generating such mutants; (2) anti-angiogenic therapy may have the capability of overcoming the problem of tumor heterogeneity[21]. At present, tumor heterogeneity has become a major problem with the tumor cell-targeting therapy; (3) physiological barriers for the high-molecular weight drugs (such as antibodies and immunoconjugates) to penetrate into solid tumors will be also circumvented by targeting a tumor's vasculature rather than tumor cells themselves[22,23]. The possible reason is that, unlike tumor cells in the solid tumors, the vascular endothelial cells are directly accessible to circulating high-molecular weight drugs; (4) many thousands of dependent tumor cells will die of nutrient and/or oxygen deprivation if a capillary or a sector of the capillary bed fails[24,25]. Therefore, killing of only a minority of vascular endothelial cells of tumors may be sufficient to eradicate most malignant cells in tumor tissues; and (5) a single agent developed for anti-angiogenic therapy could be applied to various types of solid tumors and other angiogenesis-associated diseases.

A few lines of evidence have demonstrated that endoglin is one of the marker molecules of tumor angiogenesis, and is specifically expressed and up-regulated in tumor-associated angiogenic vasculatures, specially in tumor microvessels[1-3]. The level of endoglin in serum and tumor tissues detected by ELISA or immunohistochemistry correlated well with the prognosis of solid tumors[2,3,26]. Thus, a specific mAb against endoglin may be a good tool for diagnosis and treatment of solid tumors, including hepatoma.