Eosinophilic gastroenteritis is a rare disease of unknown etiology. It is characterized by eosinophilic infiltration of the bowel wall to a variable depth and symptoms associated with gastrointestinal tract. Recently, the authors experienced a case of eosinophilic gastroenteritis presenting as small bowel obstruction. A 51-year old woman was admitted to our hospital complaining of abdominal pain and vomiting. Physical examination revealed a distended abdomen with diffuse tenderness. Complete blood count showed mild leukocytosis without eosinophilia. Computed tomography confirmed a dilatation of the small intestine with ascites. An emergency laparotomy was performed for a diagnosis of peritonitis due to intestinal obstruction. Segmental resection of the ileum and end to end anastomosis were performed. Histologically, there was a dense infiltration of eosinophils throughout the entire thickness of ileal wall and eosinophilic enteritis was diagnosed. The patient recovered well, and was free from gastrointestinal symptoms at the time when we reported her disease.

A 51-year old woman presented to the emergency department with complaints of acute-onset of abdominal pain and vomiting. She did not receive any abdominal operation. The patient denied taking any drugs or herbal medicines. She had no history of drug allergy, asthma, or allergic rhinitis. Physical examination revealed that her abdomen was slightly distended and rigid with tenderness. Laboratory investigation showed a white cell count of 10 800/mm3 with 3% eosinophils. Other laboratory studies were within normal limit. Abdominal radiograph displayed multiple air-fluid levels in the small intestine (Figure 1). Computed tomography demonstrated dilatation of the small intestine and ascites (Figure 2). With her abdominal distension and tenderness progressively worsening, emergency laparotomy was performed with a midline incision. Exploration revealed a large amount of yellowish ascites in the peritoneal cavity and focal stricture in the ileum about 60 cm proximal to the ileocecal valve. The remaining small bowel was dilated. Further inspection of the peritoneal cavity did not find any other abnormality. The stricture site was resected about 10 cm long and end to end anastomosis was performed. The mucosa of the specimen was edematous but there was no inflammation (Figure 3). Histologically, there was a dense infiltration of eosinophils throughout the entire thickness of ileal wall (Figure 4). Postoperatively, the patient’s stool was negative for ova and parasites and skin prick test was negative. During the follow-up period of 1 year, the patient was completely free of recurrence. 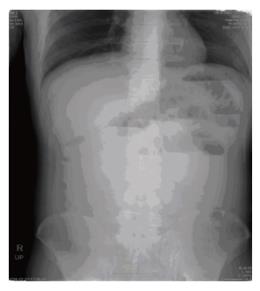 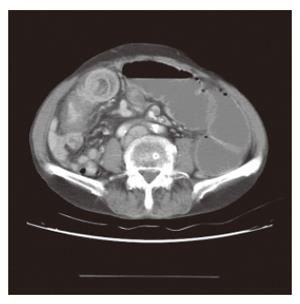 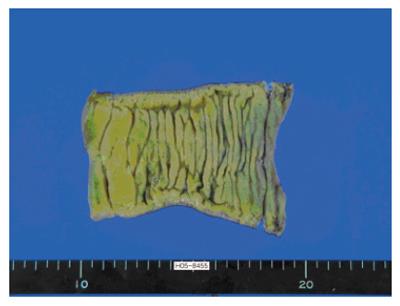 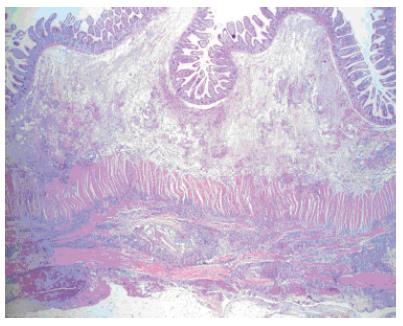 Figure 4 Microscopy of the resected ileum revealing eosinophilic infiltration from the submucosa to the subserosa (HE × 40).
DISCUSSION

Primary eosinophilic gastroenteritis is defined as a disorder that primarily affects the gastrointestinal tract with eosinophil-rich inflammation in the absence of known causes for eosnophilia, including drug reaction, parasitic infections, and malignancy[10]. Eosinophililc gastroenteritis was first described in 1937. In 1970, Klein classified the disease according to the predominance of eosinophilic infiltration in different layers of the intestinal wall[11]. Involvement of different layers of the intestinal wall usually gives rise to different clinical manifestations. The mucosal form of eosinophilic gastroenteritis (most common variant) is characterized by vomiting, abdominal pain, diarrhea, blood loss in stools, iron-deficiency anemia, malabsorption, and protein-losing enteropathy. The muscularis form is characterized by infiltration of eosinophils predominantly in the muscle layer, leading to thickening of the bowel wall, which might result in gastrointestinal obstructive symptoms. The serosal form occurs in a minority of patients with eosinophilic gastroenteritis, and is characterized by exudative ascites with higher peripheral eosinophil counts compared with the other forms[3,10]. In our case, eosinophils infiltrated all three layers of the intestinal wall. Thickening of the muscle layers narrowed the intestinal lumen, causing intestinal obstruction, and serosal involvement produced ascites without peripheral eosinophilia.

Treatment with a steroid is the mainstay in the management of eosinophilic gastroenteritis. Although surgeons should avoid unnecessary surgery, surgical intervention may sometimes be required when a definitive diagnosis cannot be made or when obstruction or perforation occurs, as in this patient.

Because the natural history of eosionphilic gastroenteritis has not been well documented, long-term follow-up is required. Moreover, these diseases can often be a manifestation of another primary disease process, routine surveillance of the cardiopulmonary systems is recommended[11].